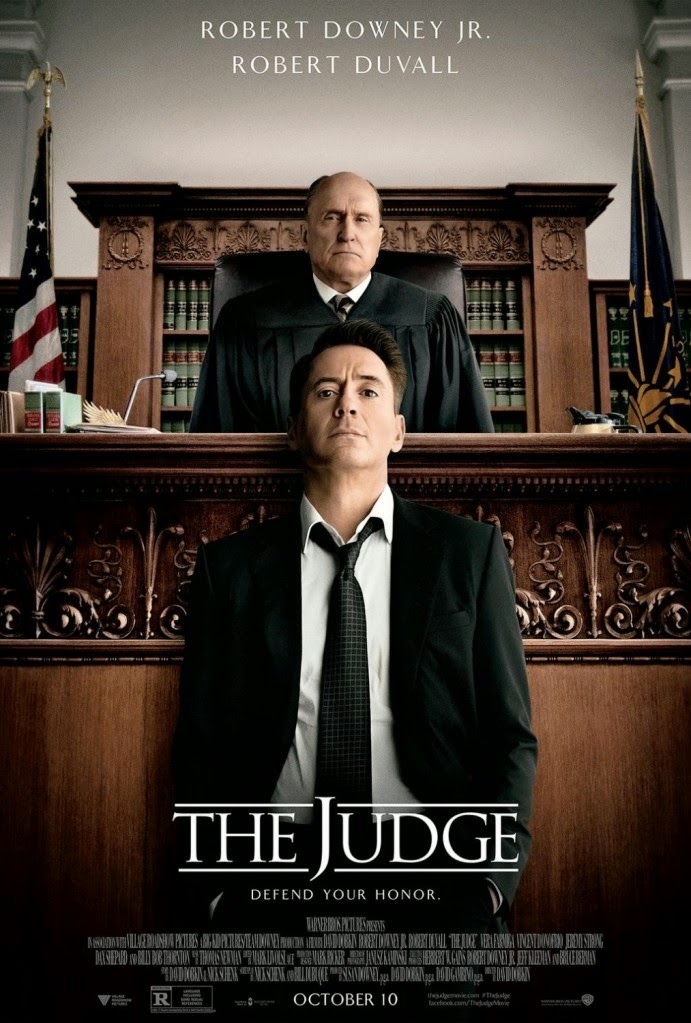 Judge Joseph Palmer:  Are you asking if you can represent me?

There is a scene in The Judge that features the big city lawyer and his estranged father having a huge argument during a violent wind storm.  It is just one of the many scenes that really want to hammer home the emotions on display.  Despite featuring a solid cast and moments where they can shine, The Judge is a film that goes way overboard, when it comes to spelling out exactly how an audience should feel.  Not helping is the very sentimental screenplay that must have read, “Go big,” at the end of a good majority of the scenes, as a note to both the actors and director.  The film is a huge pile of clichés that seem to have been filmed in an effort to rake in awards consideration for the two acting Roberts featured.  It is the kind of contrived courtroom drama that is designed to get an obvious audience response, despite a lack of any sort of real weight behind the film. 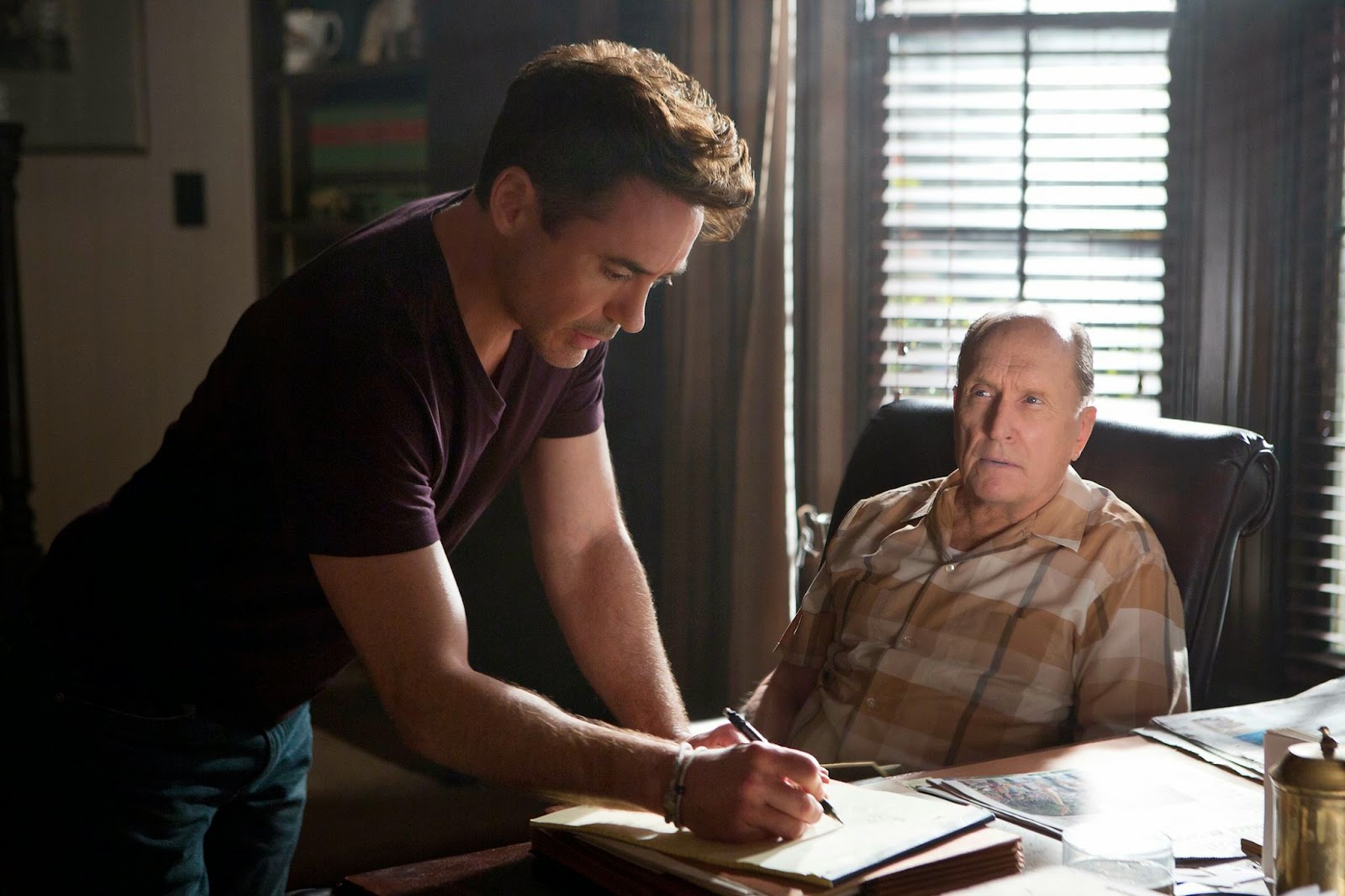 The Judge features Robert Downy Jr. as a big city lawyer who must return home to pay respects to his recently deceased mother.  This involves seeing his family, of course, which includes his father, Judge Joseph Palmer (Robert Duvall), the tough judge who was hard on his son growing up.  The two have not talked forever and their relationship is so damaged that the two men merely shake hands upon seeing each other.   The real drama begins when the Judge is accused of hitting a man with his car.  Did he do it on purpose?  What state was the Judge in? How can this be connected to the father-son story at play?  All of these questions are what drive the central story in this film.

One would think that a film featuring a character that is eventually touted as “the best lawyer” by another character would actually portray that character doing some great work as a lawyer.  The Judge does no such thing.  It is so wrapped up in spelling out every dramatic beat in an overly –directed manner, that if forgets to show us if Robert Downey Jr. is even that good of a lawyer.  We get big scenes with actors yelling at each other, and Downey Jr. huffs and puffs during scenes that feature an inferior lawyer not saying things like, “objection,” but I am not sure if being teary-eyed in a courtroom at the climax of the film is the same as being “the best lawyer.”  He is not the Atticus Finch this film references, but does seem more in line with Joe Pesci’s Vincent Gambino, just sadder. 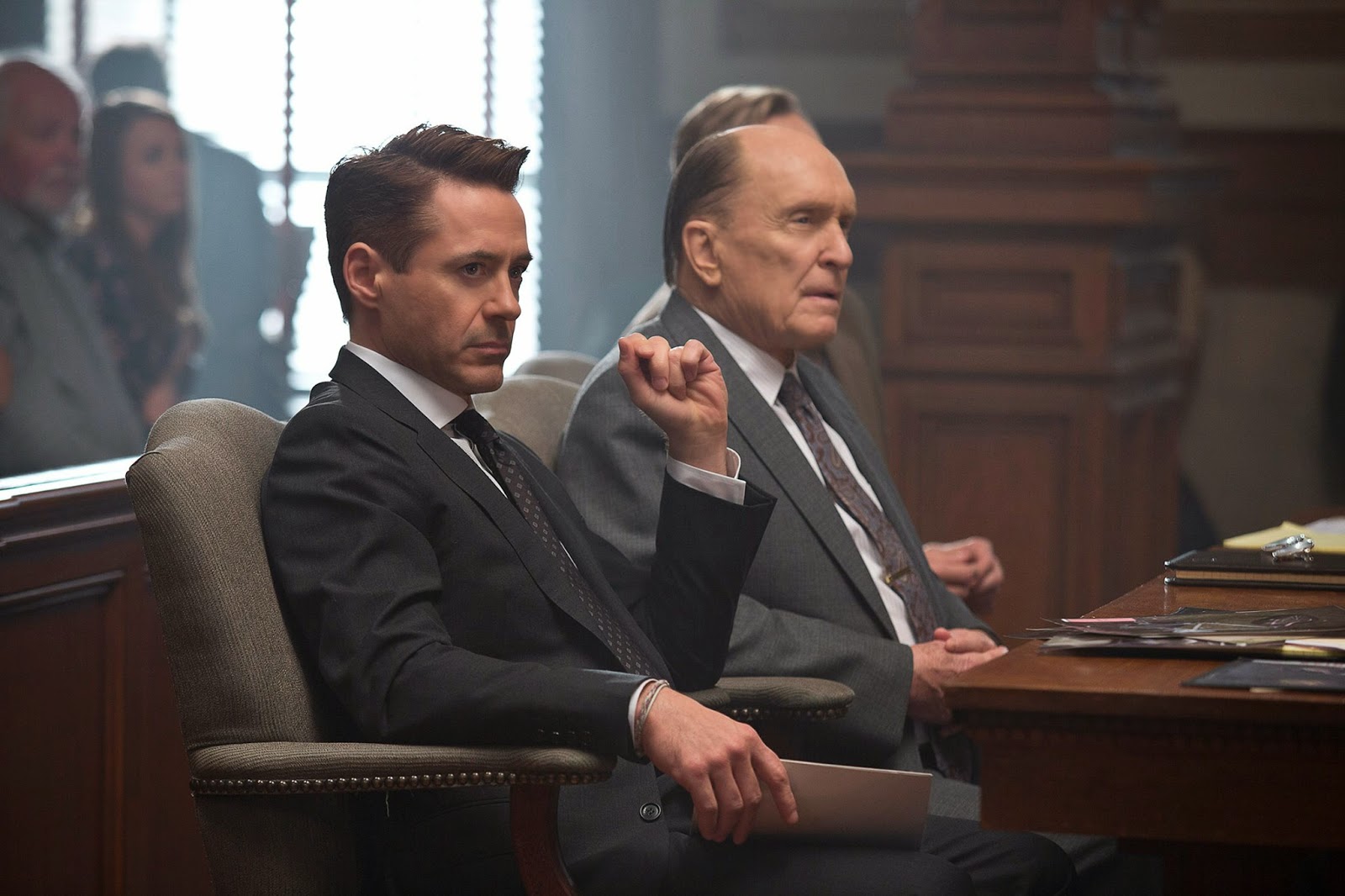 To Downey Jr.’s credit, he really pushed for this film to be made.  Serving as a producer on it with his wife, it is nice to see him expand beyond the realm of the blockbuster films that have turned him into one of the biggest movie stars in the world.  The issue I find is that this material seems so clearly beneath him.  Downey Jr. is playing up his fast-talking, wise-cracking charm and mixes that with the dramatic expressions we know he is capable of, but it is all so forced.  This is one of the few actors who we know can keep us on his side, even if he plays the biggest jerk in the world, but instead of playing the character that would make fun of films like this, while appearing in a more challenging role, he is headlining it.

As I said, the material is beneath our main man, as well as a majority of this cast.  Robert Duvall playing a cranky old man with an authoritative role is nothing new for him.  Vera Farmiga as the old girlfriend makes me pine for the weird energy she brings to Bates Motel, a show I am not even a fan of, as her character in The Judge is just a subplot that overextends this movie (and this is a week after Gone Girl, which featured a variety of female character roles, while this film basically has only a mother and a daughter, both of whom Downey Jr. makes out with).  Vincent D’Onofrio shows up to be as solid as ever as the older brother, even if his character seems like the one who really needs a dramatic arc to deal with, given what we learn about his relationship with Downey Jr.  Jeremy Strong plays the younger brother who is helpfully described as “slow,” as not to offend anyone, despite serving as a reminder of what Downey Jr. said about playing mentally challenged characters in Tropic Thunder.  And then you have Billy Bob Thorton, who makes sure to deliver on doing a favor for a friend in a role that he can easily nail, even if the film wants to overplay how ‘evil’ his prosecutor character is, given the heavy sound emphasis on his retractable water cup. 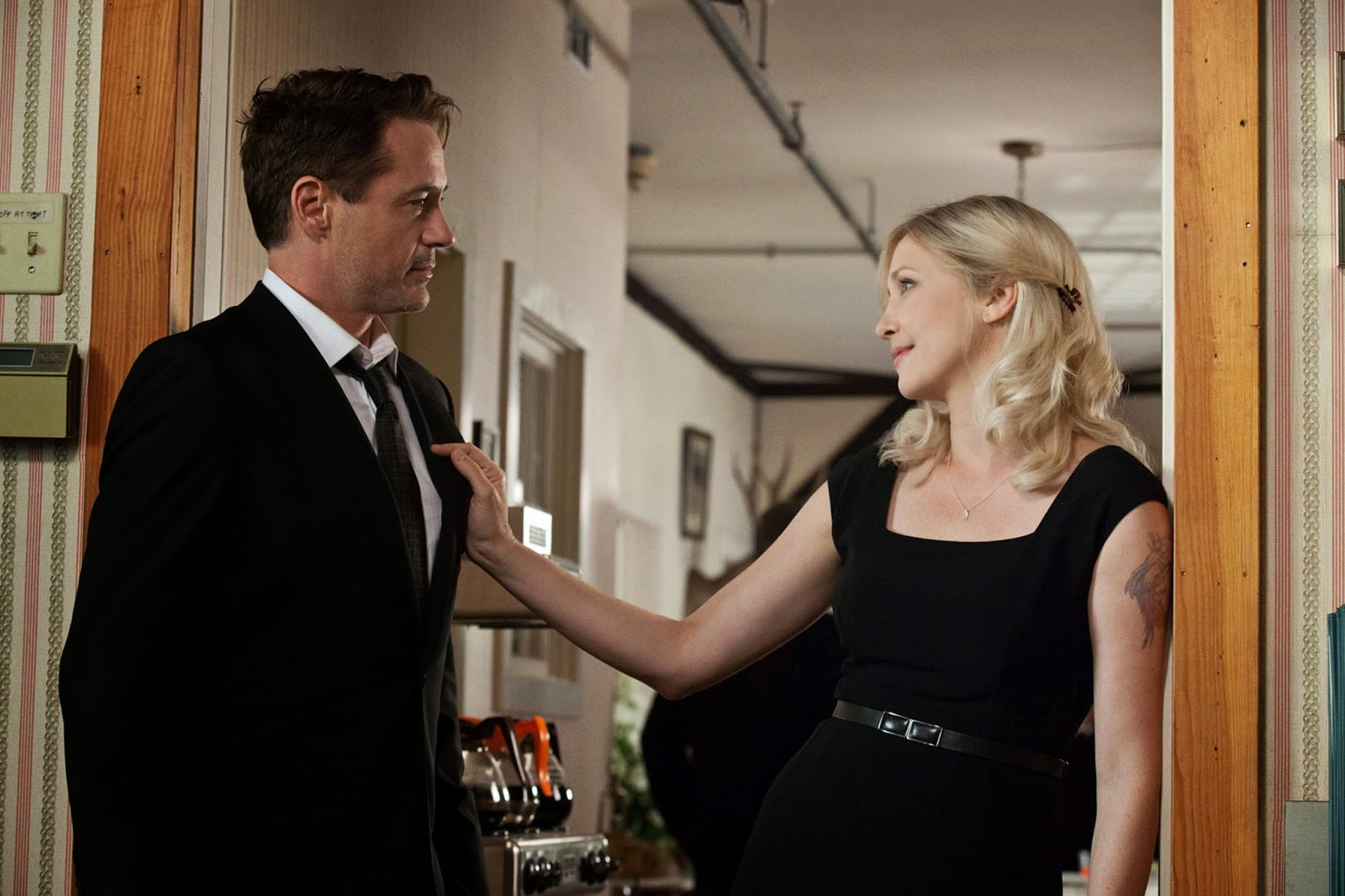 The tagline for this movie could have been “Emphasis for Dramatic Effect,” as director David Dobkin takes every opportunity to extend scenes by minutes longer than they need to be, in order to make sure the emotional beats have been hammered home.  Perhaps this was part of the screenplay by Nick Schenk and Bill Dubuque, but regardless, Dobkin did not say no to subtlety.  Working with the Oscar-winning cinematographer Janusz Kaminski to ensure that he can capture beautiful wide shots of men walking away from each other, Dobkin also manages to shoot himself in the foot by going for a real slick approach with simple ideas such as showing Downey Jr. driving into town, which has been turned into an unpolished CG shot that goes from a close-up to a weird-looking mix of vehicle, road, and poorly rendered farmland, within a seamless edit.  It is excessive, just like this film.

At nearly two and a half hours, The Judge goes on and on to achieve very little.  It has the elements of a tight courtroom drama, but the case is nothing all that clever.  We could be seeing the dynamics of a father-son relationship and how it changes, but it is handled with no subtlety or nuance.  The big city lawyer could go through the typical change as a person, but even the moral of this story for Downey Jr. appears to be more along the lines of, “you can’t win them all” and “home is where the heart is.”  I would be all for leniency on a film like this if it was tighter and not so ridiculously obvious in its intentions, but The Judge is the kind of film that is completely transparent. 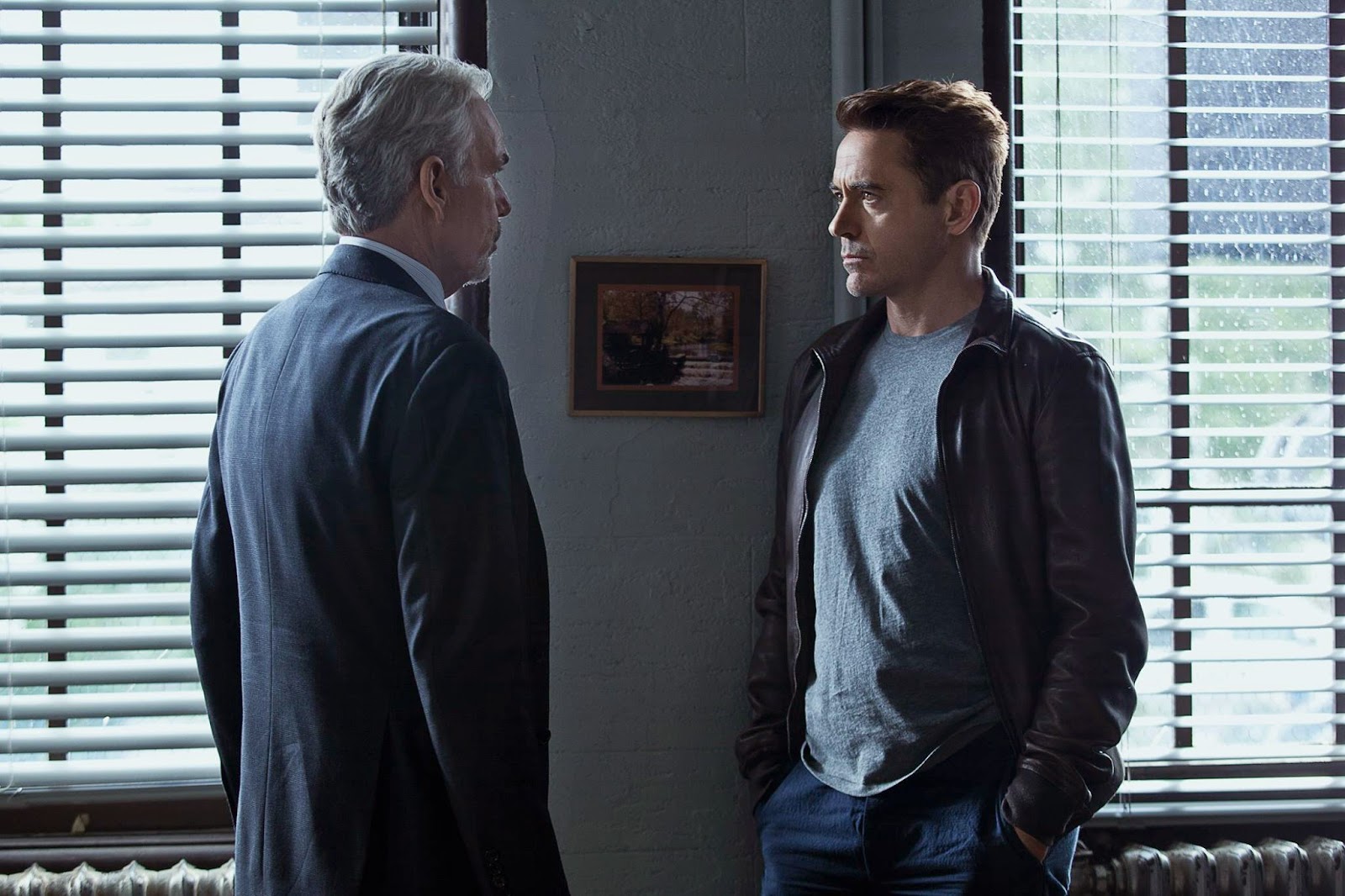 In saying all of this, there is one scene that really works.  It has Downey Jr. dealing with his father in a way played for drama and comedy.  The two men find themselves uncomfortably close, but one man is still there to help another man, only to have a third person knock on a door and make things even more awkward.  It is one of the few moments that is played with a level of honesty I wish the rest of the film had.  The Judge is far too crowded with on-the-nose emotional beats and talky characters, in a film that could have been reigned in and made into an old-fashioned courtroom drama, where the actors were just allowed to act, as opposed to acting so big to match the direction.  Unfortunately, it does go big, making The Judge feel more oppressive by hammering everything home, than impressive with its possibilities.

Judge Joseph Palmer:  You and I are finally done. 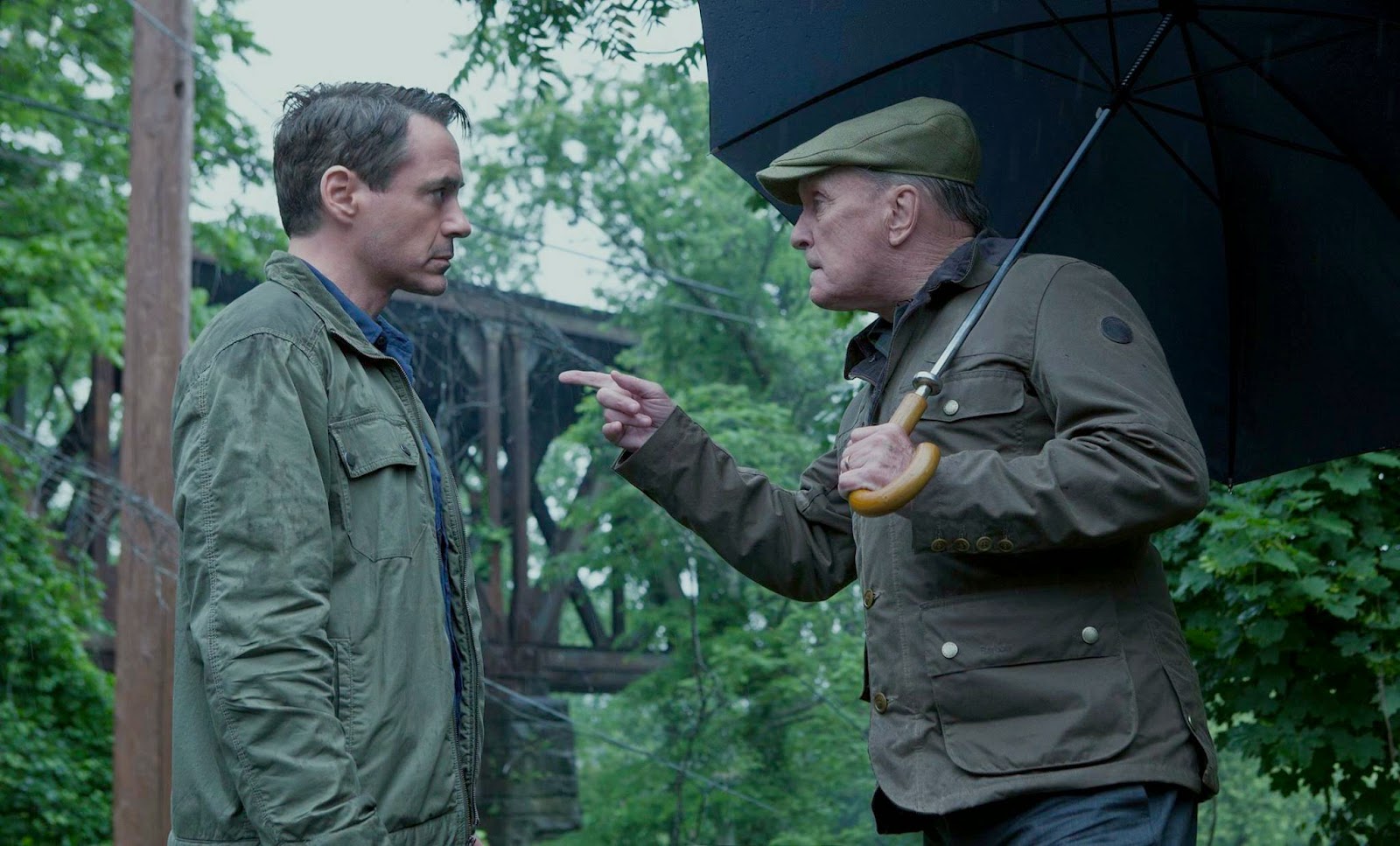