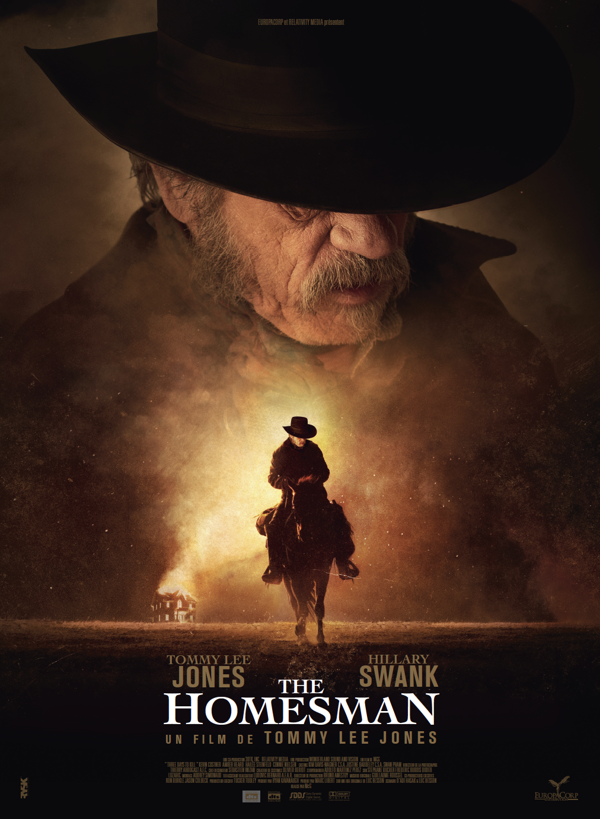 How grim is too grim and when does it just start becoming a little humorous?  Earlier this year we had a novel idea for a film in the form of A Million Ways to Die in the West.  That film did not work for me overall, but the idea of making a western film that put emphasis on how terrible a time it could really be was a funny one.  Tommy Lee Jones’ second directorial effort, The Homesman, based on the novel by Glendon Swarthout, is a film that sits in grim territory, but pushes things so far that it becomes a strange sort of dark comedy.  The film has a large cast of great actors, but they all provide merely decent to good performances.  Hilary Swank stands out, but that makes sense, given that she does most of the heavy-lifting, with strong support from Jones to back her up.  Really, the film seems confused by how sprawling it could be versus how effectively poignant it may be if the film felt a bit more consistent.  The good news is, this film is far too interesting to write off. 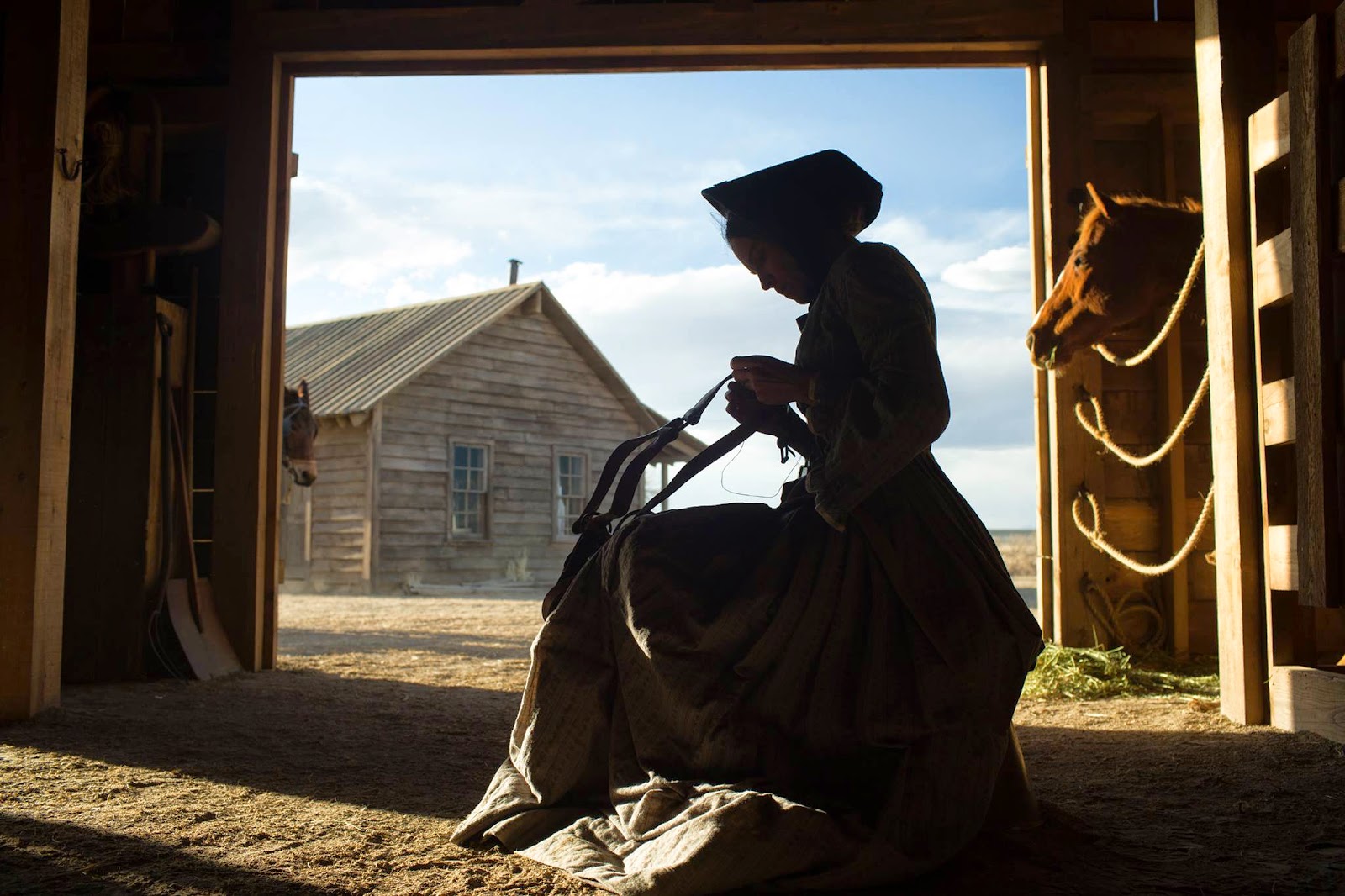 Swank stars as Mary Bee Cuddy, a single woman living alone in a small community in Nebraska, during the 1850s.  Regarded as bossy and not enough of a looker for other men to settle down with, Cuddy finds herself lonely, but still actively part of her community.  As such, she decides to take it upon herself to accomplish a mission for the town.  Three young women have been driven mad due to the lives they live.  With their husbands not being up to the challenge of doing what is necessary, Cuddy takes on the task of escorting these women to Iowa.  During her travels, she encounters George Briggs (Tommy Lee Jones), a man who was literally left hanging.  Cuddy saves Briggs’ life in exchange for his help on this mission.  Together, the two attempt to make the journey, facing the many challenges along the way.

A lot of my interest in this film came from my admiration for Jones’ feature directorial debut, The Three Burials of Melquiades Estrada, which I found to be rather excellent.  It helps that I like Jones in general, and he has assembled quite the cast.  Along with Swank, the film also stars Meryl Streep, James Spader, John Lithgow, Tim Blake Nelson, William Fichtner, Hailee Steinfeld, Miranda Otto, and Jesse Plemons, among others.  It is quite the cast list, but they are all mostly handled in a fairly episodic fashion, which is part of what had me finding fault in the film.  It is not that any of the cast members felt unnecessary (the film’s pacing is hardly the problem and removing elements would not necessarily help), but it did feel like there was a lack in unified understanding of the tone for this film. 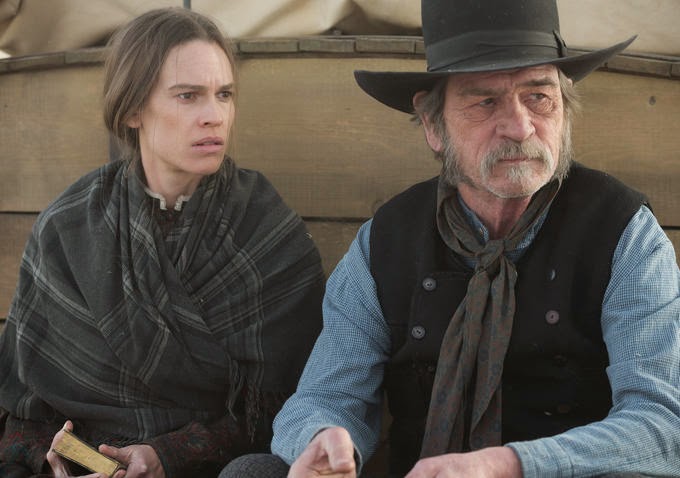 Early on we witness some pretty dire scenarios.  Understandably, the film finds a way to lighten up, but it always seems to go back in forth, which is signified to the point of obviousness, as Jones continually has scenes fade out and fade back in again.  Honestly, it appeared as if Jones was trying to emulate the style of Jim Jarmusch at points, which would certainly account for the weirdness that I found in this film and its tone.  These are the elements that honestly felt distracting.  While I would say I was able to see Hilary Swank deliver a terrific performance in a film that tries its best to work as a subversive sort of western, while also serving as a tragic character drama, it has too many other things that did not seem to play out in the film’s favor for me to hold in it in higher regard.

From a production standpoint, this is a gorgeous film.  Tommy Lee Jones brought on acclaimed Mexican cinematographer Rodrigo Prieto to provide us with wonderful looking scenes, with a sense of focus on the frontier life that a woman is attempting to take charge in, as she leads a journey.  Marco Beltrami’s score does a fine job of echoing the motifs of older westerns, while becoming something of its own for this film and I appreciated it quite a bit.  Sure, it may not be surprising that this is a good-looking western, but at the same time, that is the case, so I am happy to point it out. 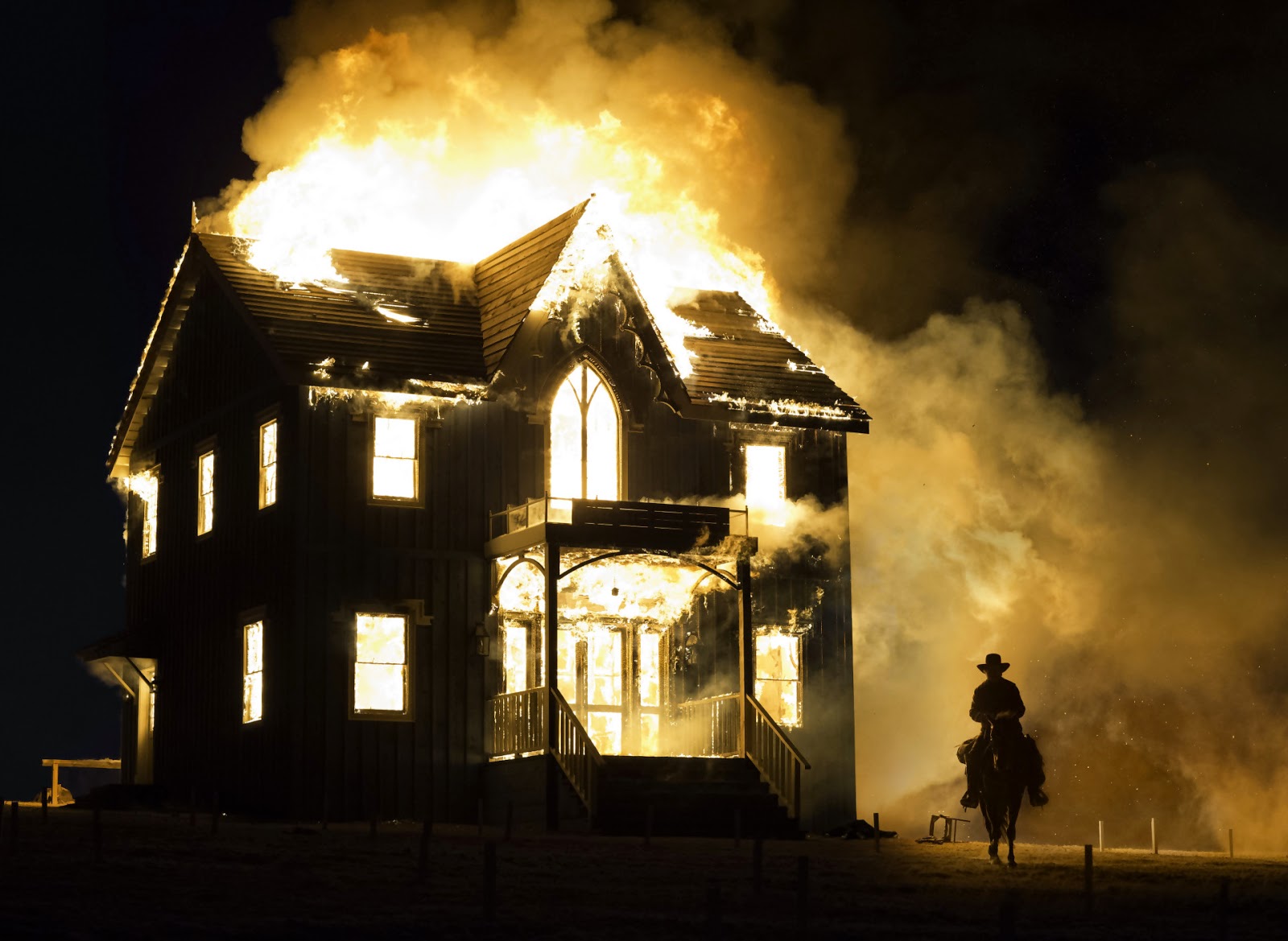 Without wanting to reveal too much, there are some other thematic elements that do, ultimately, make this film more interesting than I may be letting on.  A lot of it does have to do with the two central performances.  Swank and Jones are very good together and having them essentially represent, in various ways, how life can be hard an unpredictable goes over quite well by the time this film reaches its final stretch.  I would like to also get into how this film chooses to represent the three woman driven to ‘insanity,’ but I could tell early on that The Homesman was really not going to give us more to go on, besides the tragic scenarios they found themselves in, in their lives.

The Homesman is a lot of things, which is unfortunately not the best thing for it.  Sure, it is nice to see a different sort of take on a western, with added amounts of complexity (especially in the form of Hilary Swank’s character), but it does seem to confuse its sense of humor with awkwardness.  Keeping all that in mind, the film is never unengaging.  It strives to be an entertaining film, with lots of notable minor roles, and a core set of characters that hold your attention.  The mix of grimness, subtle humor, and general weirdness added up to a film that I do not regret seeing; I just wish it came together a little better.

George Briggs:  Are you an angel? 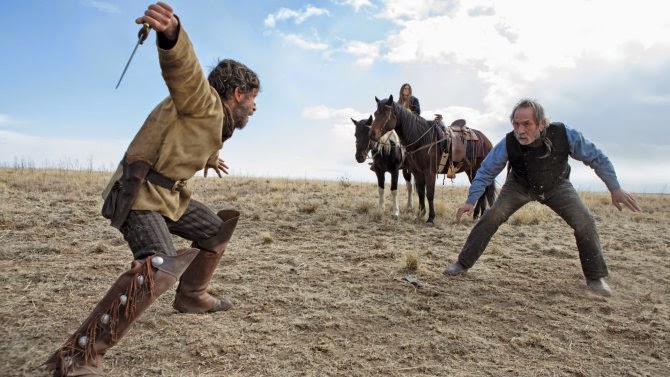 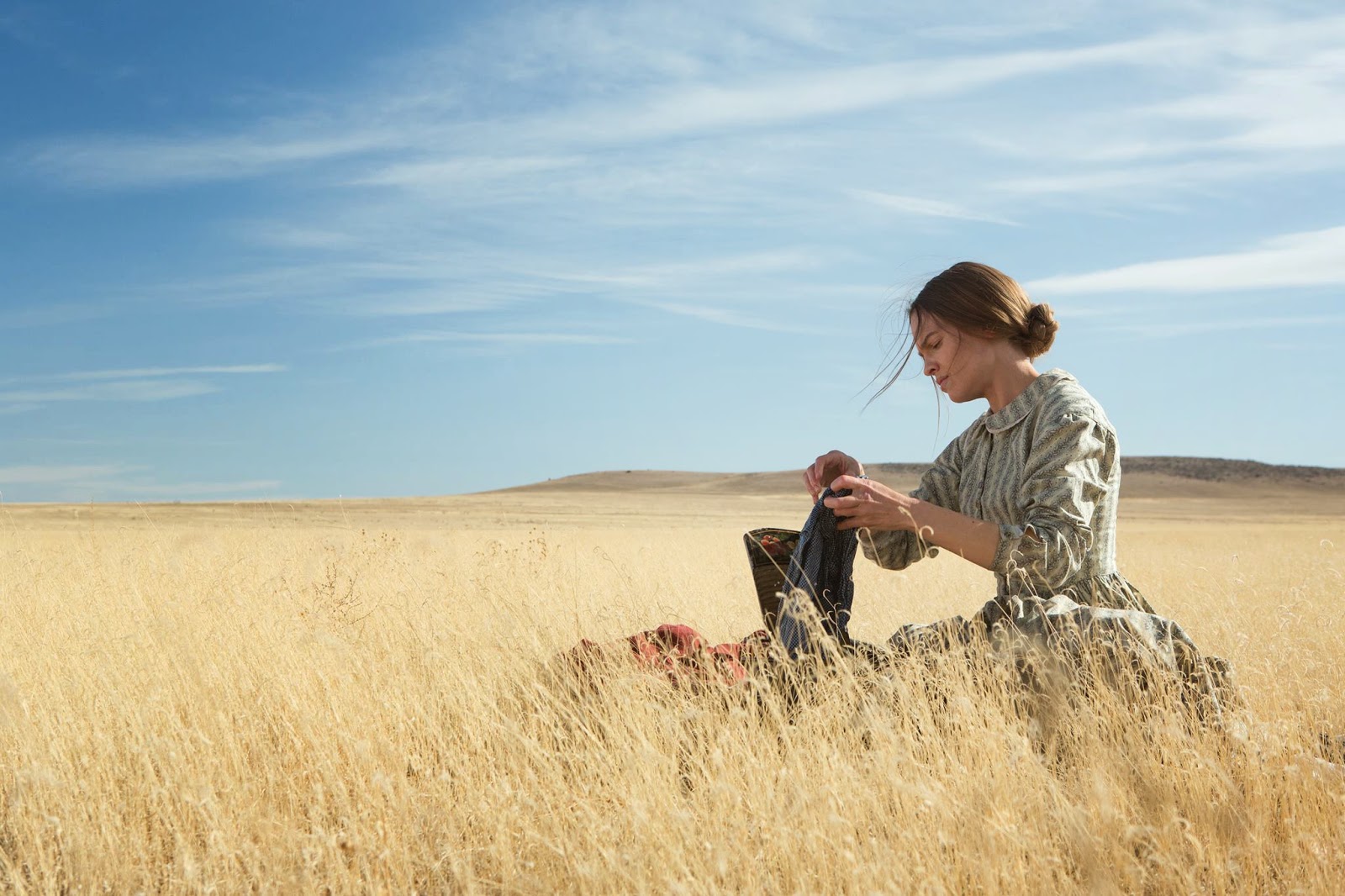 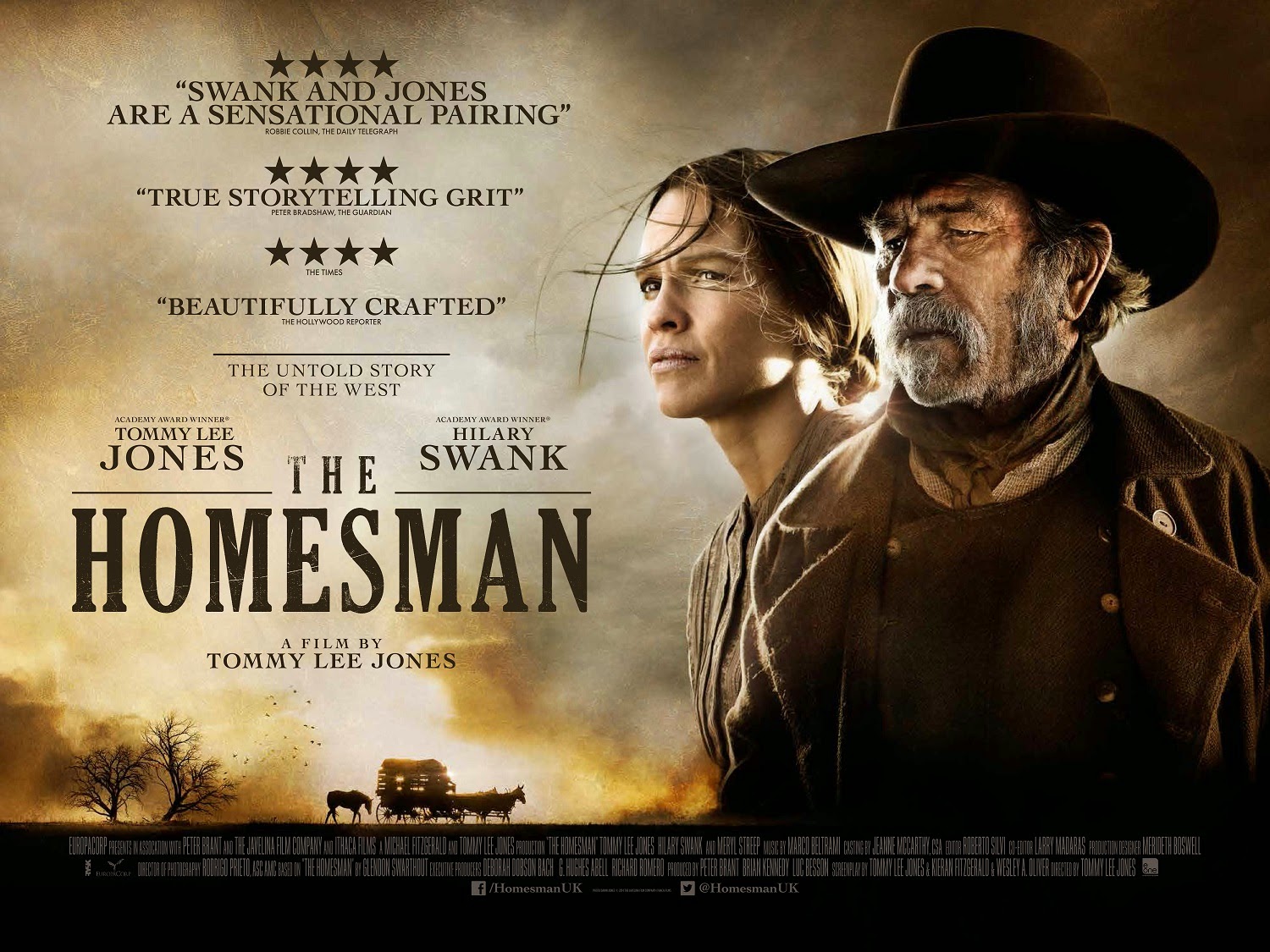