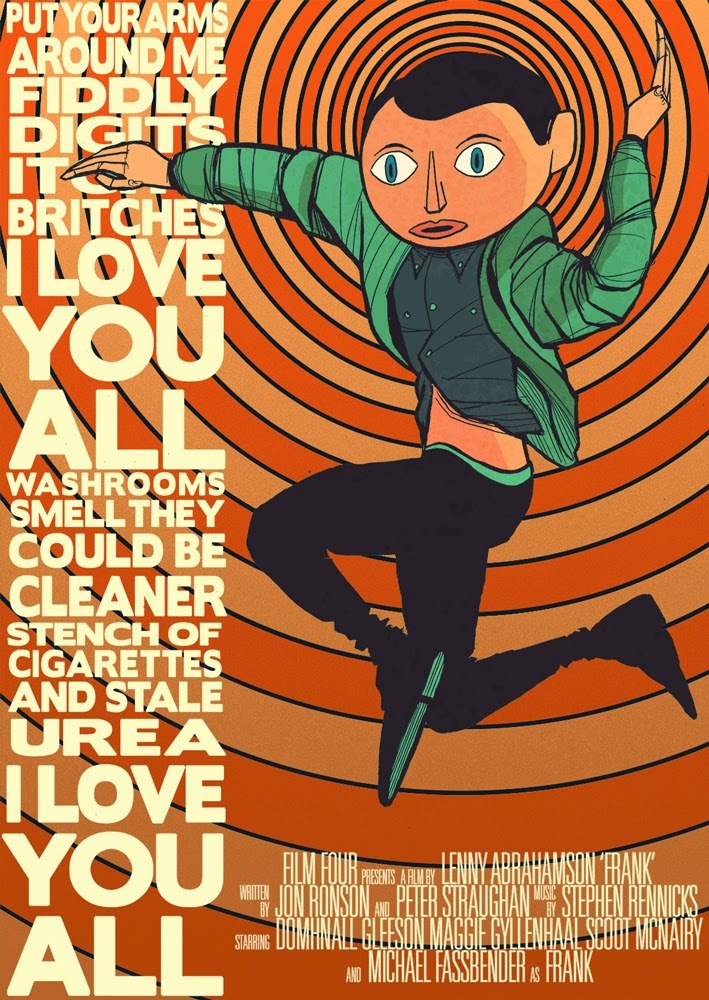 Frank:  Underneath I’m giving you a welcoming smile.

A film like Frank is not for everyone, but who cares?  I had a lot of fun with this offbeat comedy that keeps the head of its main character inside a large papier-mâché head.  The film is a comedy, a road movie of sorts, and a look at experimental/indie music culture.  It is also very funny, well-acted, and a little bittersweet, given what we learn of Frank, the man behind the head.  Given that Michael Fassbender can work for me in just about anything, I was not surprised to be so taken by this film, but it is still one I want to see be given a chance, because having a little (or a lot) of weird can be a very good thing. 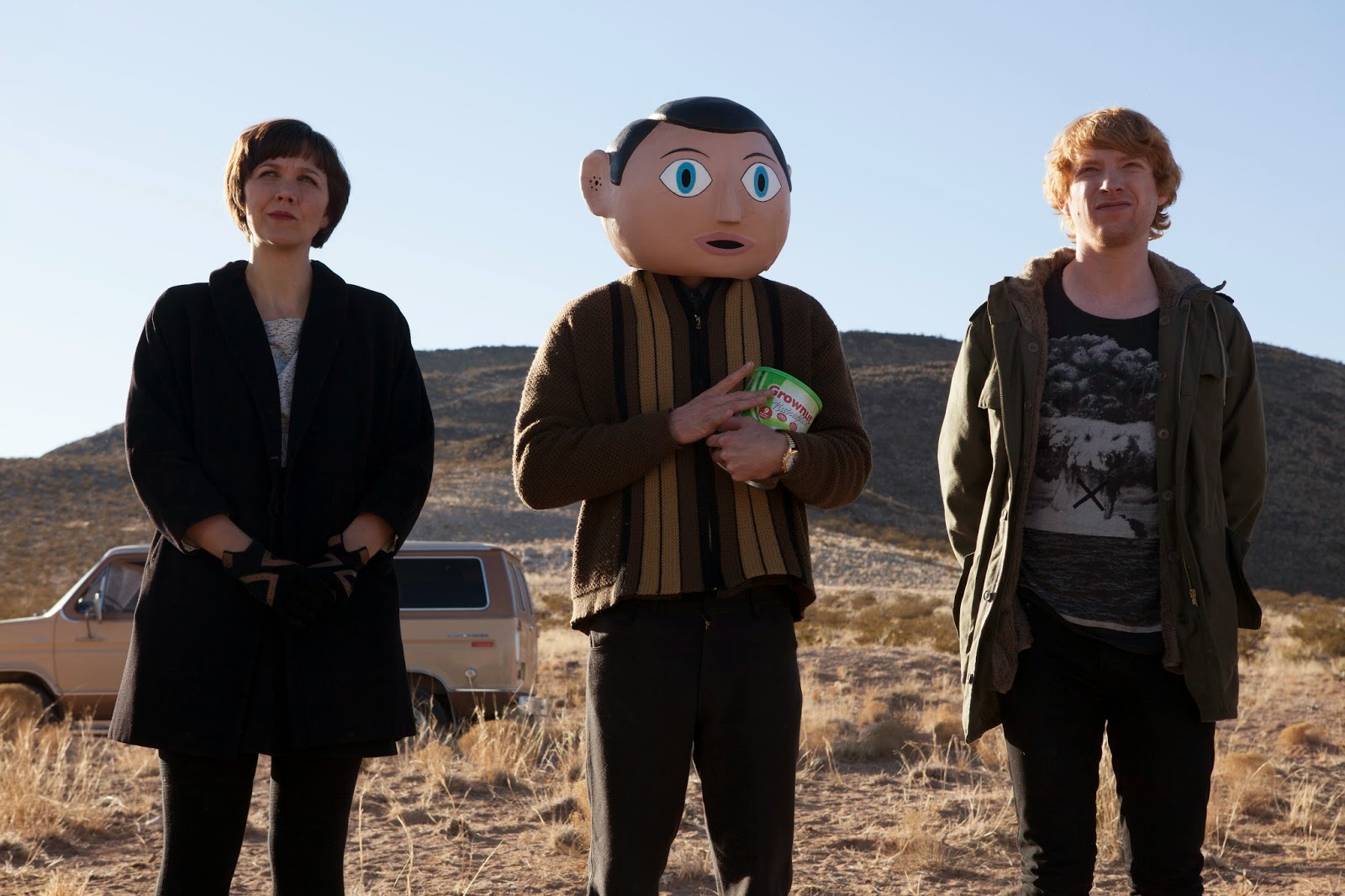 While Frank (Michael Fassbender) is the title character, we really follow a young man named Jon (Domhnall Gleeson).  Jon is an aspiring musician who is given the strange chance of a lifetime to join the eccentric (to say the least) band called the “Soronprfbs”.  They are led by Frank, a man who always wears a large fake head, which even has a plug, so he can connect a microphone and project his voice easily, as he is the lead singer.  The band also features Maggie Gyllenhaal as Clara, the aggressive theremin player who is constantly hostile towards Jon.  There are other members in the band as well, but Scoot McNairy notably shows up as Don, the band’s manager, who arranges for the group to live to a remote spot in Ireland, while recording an album.

Frank is a loosely plotted film.  Jon serves as our ‘in’ as far as seeing the rest of the band goes, but the story is pretty thin overall.  It is more of a look at this Frank character as well as a dive into obscure music culture.  Whether or not the Soronprfbs are making great music is beside the point, however, as the film is happier to focus on the weird things the band does together, as well as how this internet culture reacts to their presence in the world.  Watching the members record random sounds and try to create music out of them, while Jon uploads videos of these antics to Twitter are just some of the strange events that take place.  I enjoyed all of this.  Rather than make it some sort of mystery about Frank or turn the film into some kind of underdog story about whether or not the Soronprfbs win some kind of record deal, the film is basically a character drama that is fairly light-hearted and very entertaining. 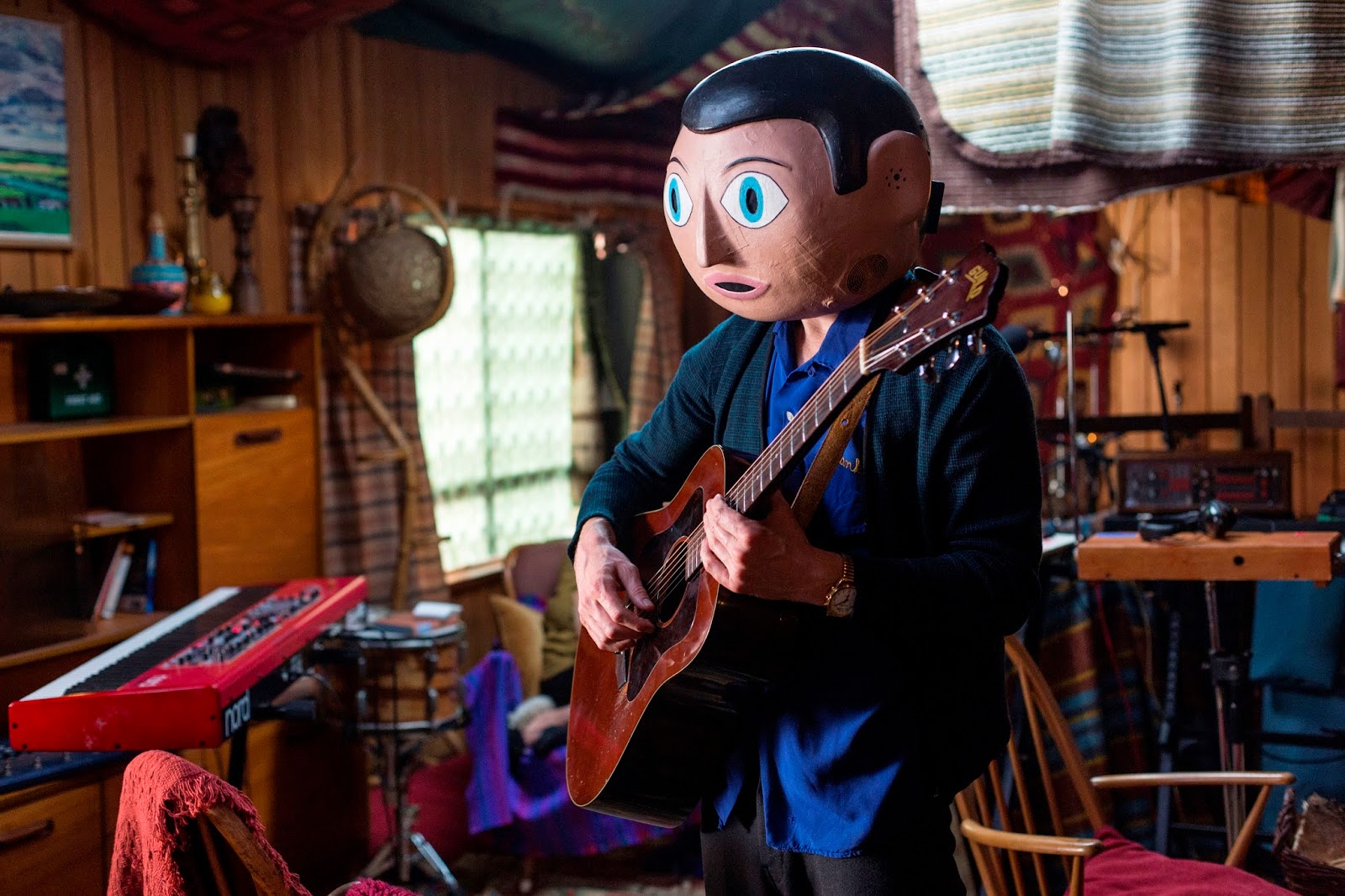 As Frank, Michael Fassbender is great.  It is a huge change from his more serious roles, yet he manages to allow for both pathos and a weird level of comfort, when he is the focus, despite this large head on his shoulders.  His character is almost handled in a way where it would not matter if he did wear this big head and that makes the film work even better because of this.  As for the true lead of the film, Domhnall Gleeson does a fine job playing this shy man who breaks out of his shell and is something of an agent of chaos, as far as the other band members are concerned.  Gleeson’s character has a desire to spread the sound of the Soronprfbs (and Frank) to the world and it is handled very well in keeping him both sympathetic, while also an outside force that disrupts the others.  I also really enjoyed Gyllenhaal.  For whatever reason, she plays ‘aggressive’ very well, as her meanness somehow lends itself to easy comedy for me.

I am aware that the film is somewhat inspired by Frank Sidebottom, a comedic persona with a similar head, along with other musician inspirations, but director Lenny Abrahamson does a fine job of letting this film flow to its own beat.  It plays like a film that sits far from convention, be it some sort of loose biopic or just a weird comedy.  Instead, it works in as a sort of funky satire and a buddy movie, indebted to films from the late 60s/early 70s, despite being very much set in modern times.  I also believe it works because it is funny, while respectful to Frank, which is actually pretty sweet, given how much darker the final parts of the film become. 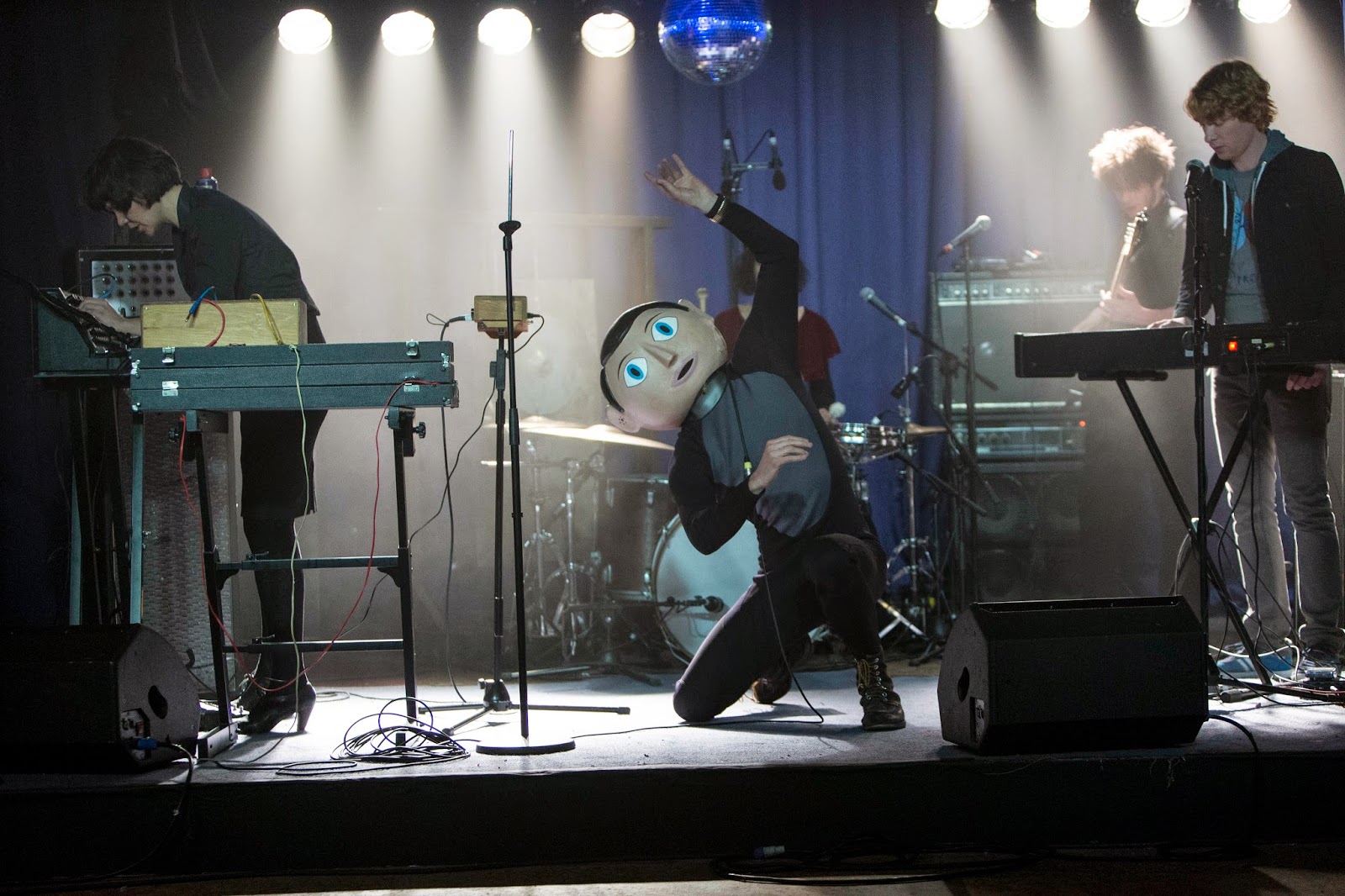 It is not all fun and games in Frank, as the film does address issues that come with being a man wearing a large fake head all of the time, let alone just a man who is clearly different from others, but it is the weirdness, the performances, and the enjoyable overall nature of the film that kept me feeling so warm throughout it.  Additionally, as a person who has enjoyed his share of experimental music, but also sees it as comedic territory to mine, I really liked the way this film balanced being a character study and a semi-parody of modern artists.  Much like the music of the Soronprfbs, Frank is not necessarily meant for the mainstream, but plenty who seek it out may find a lot to enjoy in its weirdness.

Frank:  Here it is my most likable song ever! 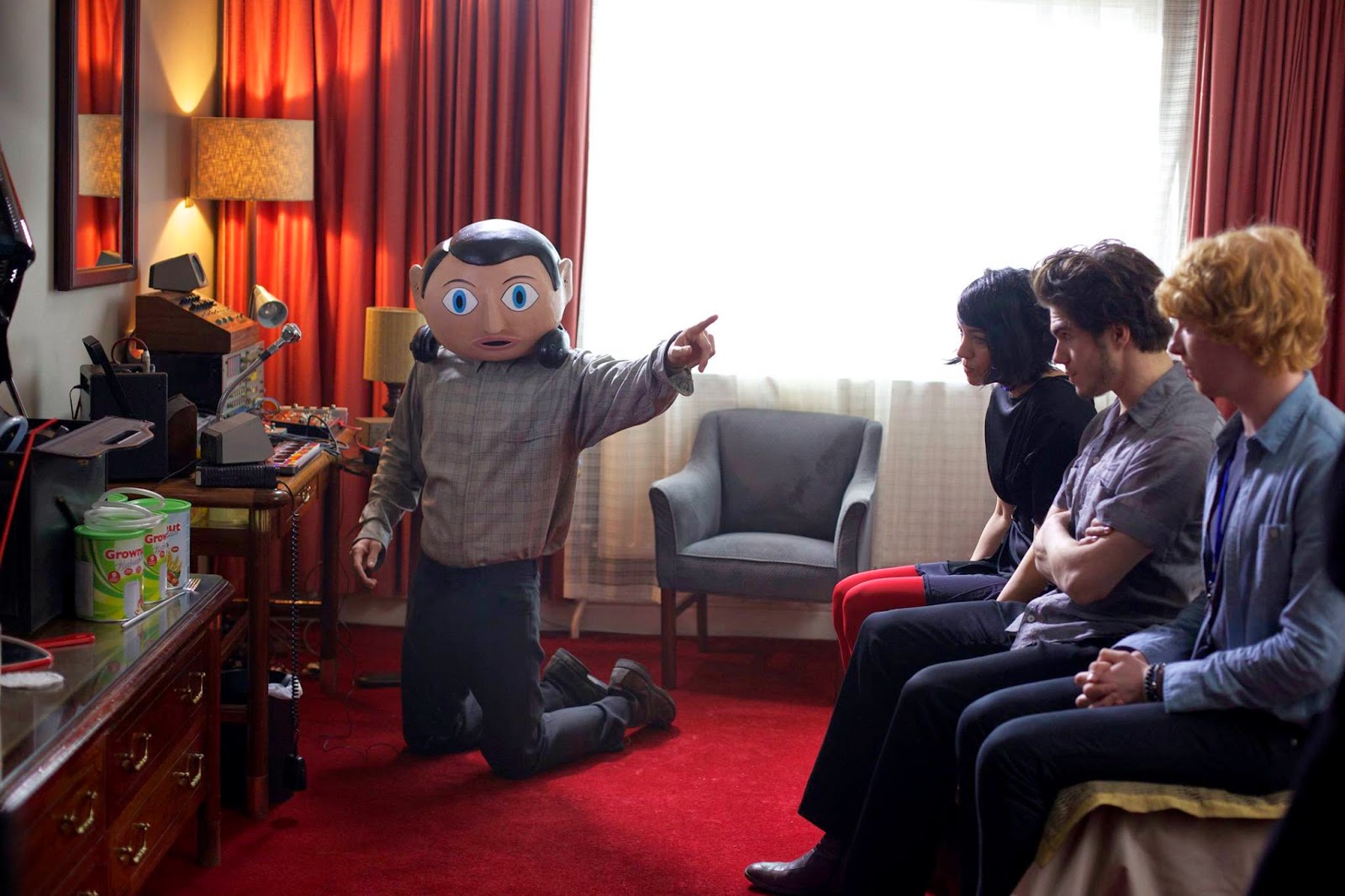 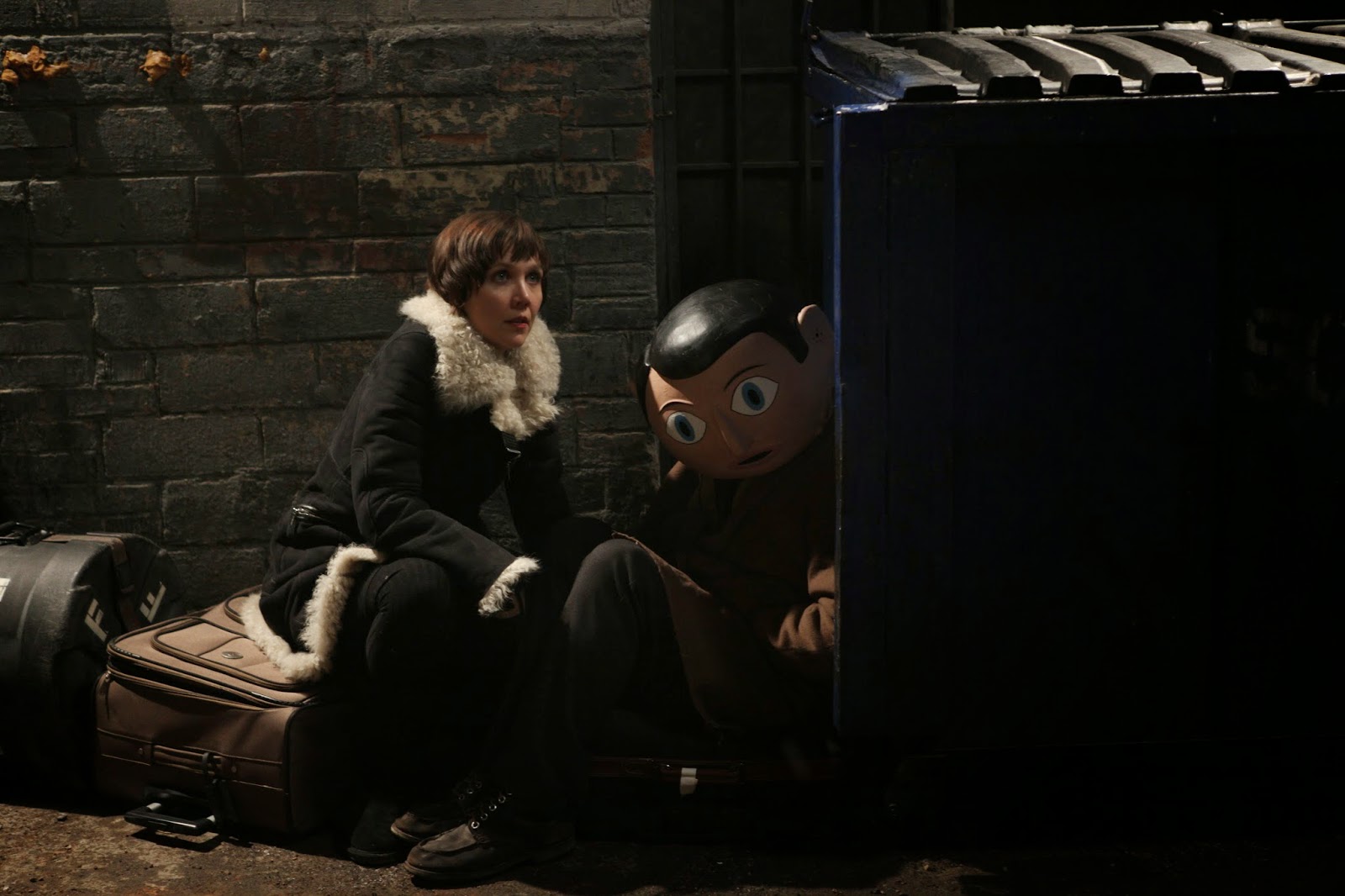 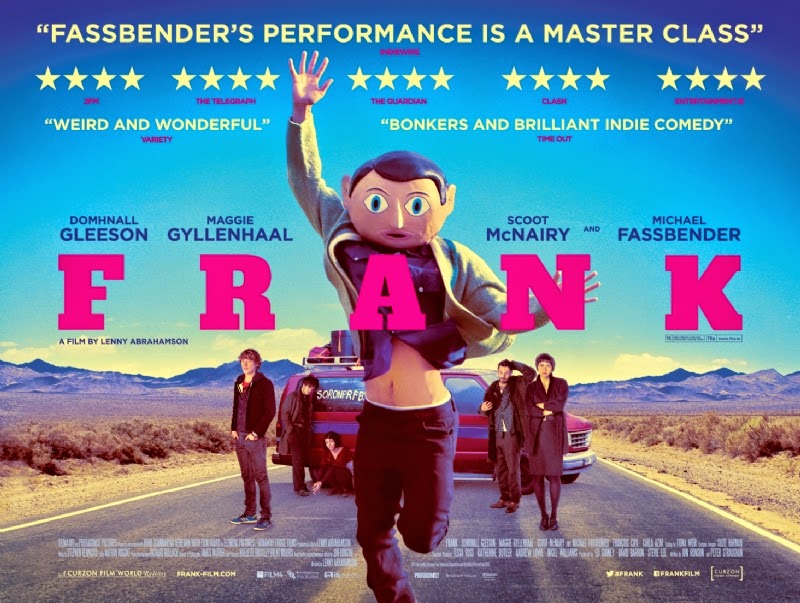 Aaron is a writer/reviewer for WhySoBlu.com.  Follow him on Twitter @AaronsPS4.
He also co-hosts a podcast, Out Now with Aaron and Abe, available via iTunes or at HHWLOD.com.
By Aaron Neuwirth
2014 Films Dark Comedy Domhnall Gleeson Indies Maggie Gyllenhaal Michael Fassbender Scoot McNairy
Reactions: