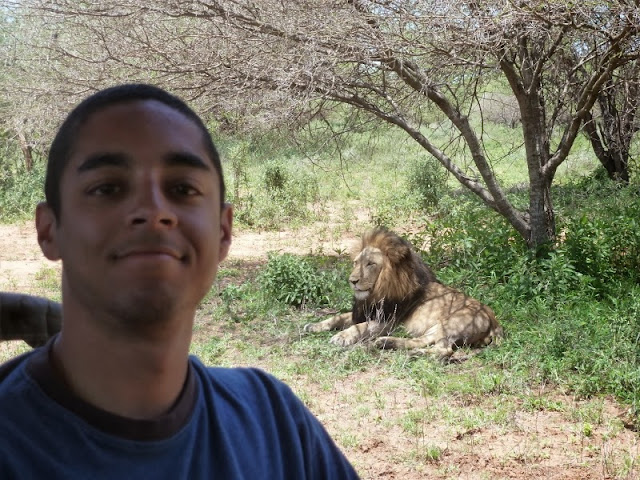 Hey there!  I have returned for yet another blog.  I have been able to do far more than I expected, as our living situation in South Africa has had some pretty capable WiFi and the down time, in between game drives, affords me the opportunity to do plenty of work that is hardly work, given that it involves me writing, looking at pictures, and sending out posts - things I generally like doing anyway.  So with that, let's get to the big stuff for this latest adventure report - the search for lions!  (Find the other Africa blog posts HERE)

So lions became a big deal, during the latter half of our stay at Camp Jabulani in Kruger National Park, in South Africa.  While my dad and I were incredibly pleased to see a lot of interesting and unique animals in the wild, along with some of the Big 5 already, let alone ride on elephants, and pet cheetahs (seriously, check out the previous blog entries), it became time to go forth and seek out the lions.  Leopards would be another story, as they are quite elusive, but lions were prevalent enough at the site that our guide, Riaan, told us it was basically bad luck that we had not seen them already.  So with that said, the next few game drives were mainly focused on getting a chance to see some lions. It was Tuesday morning, the 25th of November, 2013, for those keeping track.  We embarked upon an early drive in an effort to catch some animals that would possibly be easier to observe, before it got too hot in the afternoon.  There is more to come in regards to how quickly the weather can change in Africa, but for now, this morning drive was full of various exotic creatures and a desire to see the lions of course.  During the drive we saw a lot of regulars:  zebras, wildebeests, giraffes, impala, kudu, buffalo.

A few interesting things took place during this drive.  The first was an eagle perched on a fairly low bush.  We soon realized it was not perched, but actually attempting to find something within the bush.  We observed it claw and poke its beak inside, only to eventually grasp something in its talons and fly off to a nest nearby, joining his companion and presumably feeding the baby eagles.  Quite a neat site.  Also cool was learning about 'Dugger Boys".  Dugger Boys is a term used to describe a couple of male Cape Buffalo who would sit in the mud, away from the women, and pretty much just lounge on their own.  Maybe not the most exciting thing, but something new to me, nonetheless.  Lastly, we were able to find a crash of rhinos taking a mud bath.  It was actually three females in the mud, while the large male scratched himself on a nearby tree, but this looked like a pretty nice way to relax, as the heat began to rise. 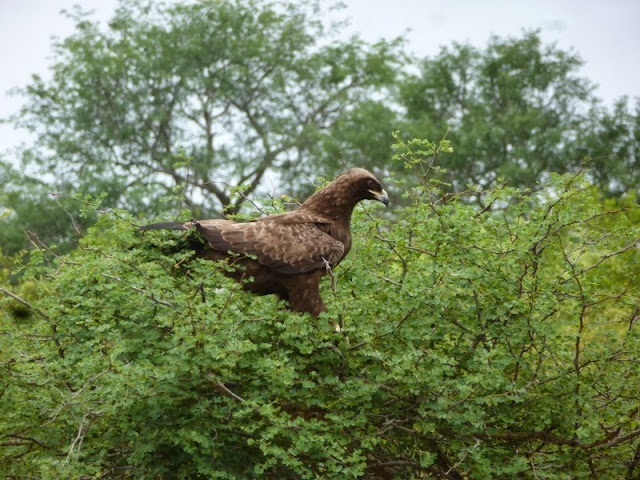 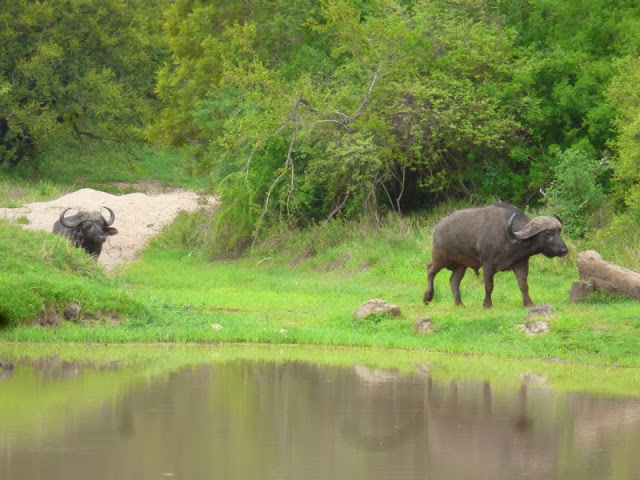 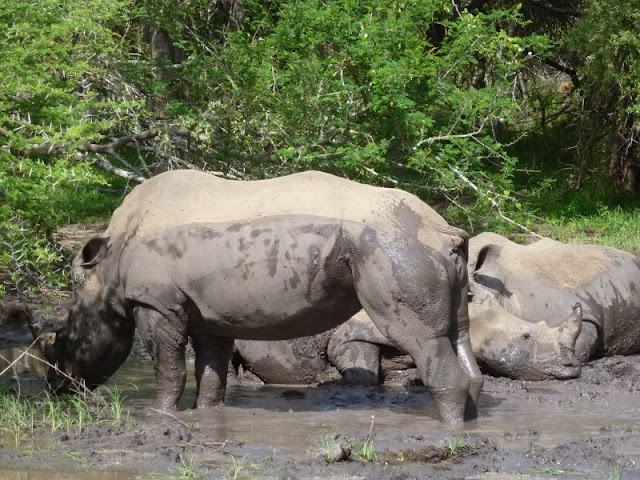 So with all of this said, no lions were found on this drive.  Riaan tried to locate them and even chased down a trail where they were seen earlier in the morning, but there was no luck this time around.  We were treated to a large gathering of zebras and water buck, but in the end, it was a return to camp for breakfast.  Clearly the lions were just messing with us at this point, but that matters little as the next drive was far more successful.  Skipping a head, after moving into some new areas we had yet to explore, it finally happened, we found a lion.  More specifically, we found a female lion, resting under a tree on a dry riverbed.  She did not seemed too pleased to see us, as she quickly moved to a more discreet location, but that did not stop us from getting some good pictures and taking joy in the fact that our goal had been met.

Moving on, the drive continued, with the intention of spotting what we could.  During this part of the drive we managed to see a pod of hippos in the water, looking pretty cool.  At this point I should mention the termite mounds.  They are huge here.  a good 3-5 feet high in some cases.  This is important because when you look for lions, your eyes play tricks on you and convince you that these mounds look an awful lot like lions.  Fortunately, we were able to encounter a termite mound-shaped lion, as some searching led us to more lions!  This time around, we encountered a much older male lion and a female, resting.  The male was happy to sit up and take pride in himself, as we took our pictures, while the female laid quietly in the grass.  It was quite the site to behold and very much worth some of the exhaustive searching, because we were having fun the whole way through. 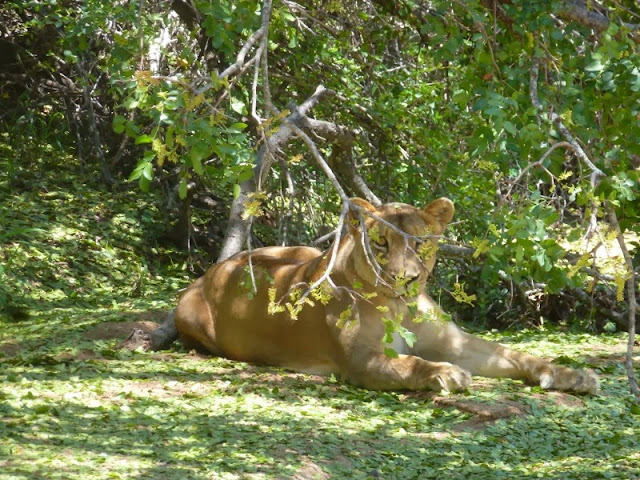 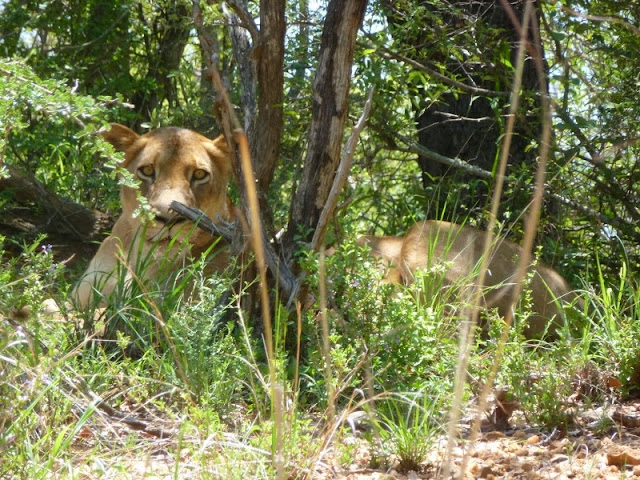 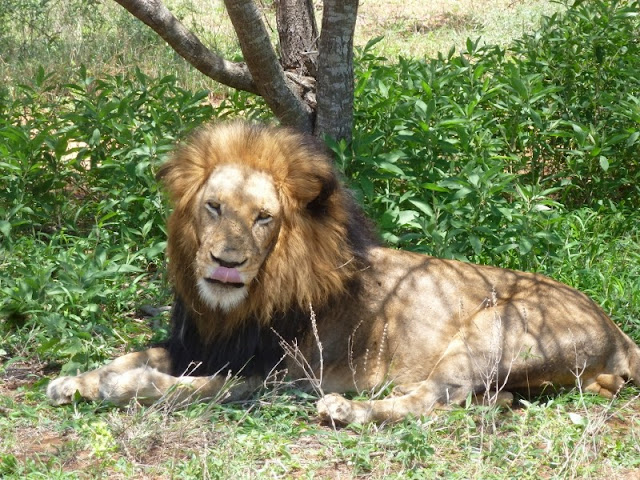 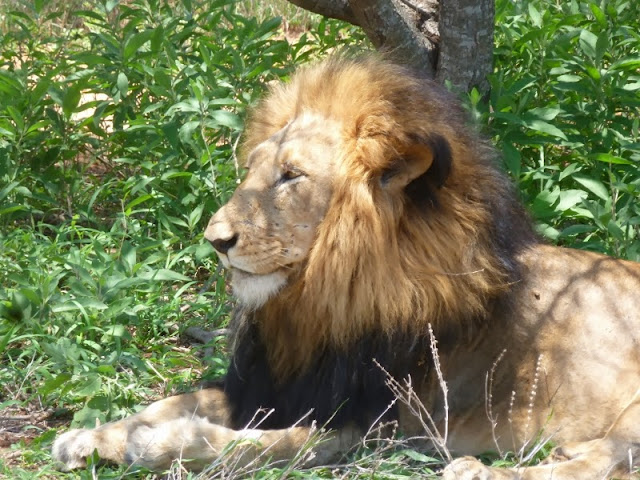 Next up the day would be elephant rides...or so we thought.  So here's what happened:  thunder and lightening.  A lot of cloud cover led to thunderstorms, which canceled our activities in the bush for the night.  Not too disappointing, as we had already ridden the elephants and interacted with them plenty, but chilling in the lodge did lower the percentage of spotting lions at night and seeing what kinds of parties they attend or whatever it is they do at that time of day.

I almost forgot to mention something and rather than edit, I'll do it now:  the last thing we saw on the previous day's game drive was a sounder of warthog taking a mud bath, bringing an end to the animal mud bath trilogy that I have been writing about.  Okay, so with that out of the way, time to describe the last day at Camp Jabulani, as far as these drives are concerned.  Basically, we saw lions yet again.  Yes, it was still cool to see.  This time it was in the morning and the lions on display were a female and her several young cubs.  They were just resting, but it apparently does not stop being interesting, when it comes to seeing lions in the wild.

Moving on, this last game drive also had a black mamba (most likely) in store for us.  We could not get a great look, as it was mostly inside of a tree, but the snake's belly and a little bit of its head was enough to get excited over.  Final sightings also included some vervet monkeys, millipedes (about 6 inches long), and some small turtles/tortoises. 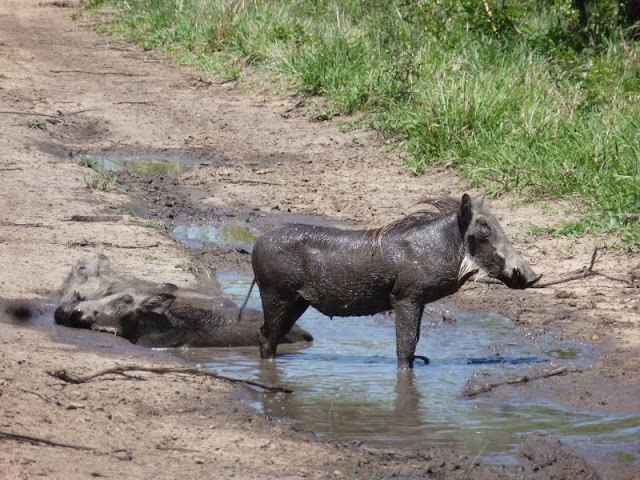 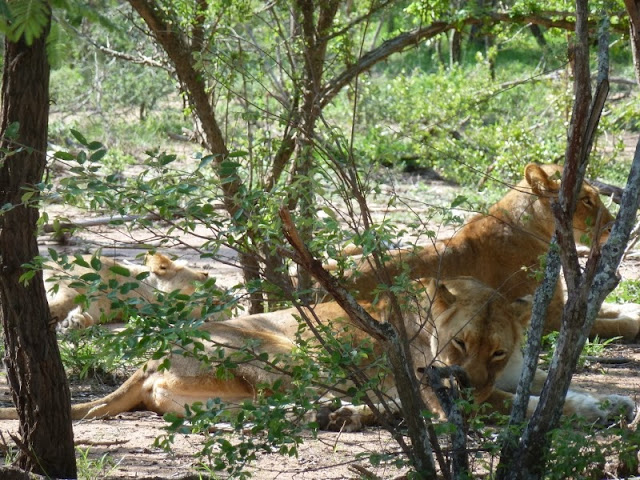 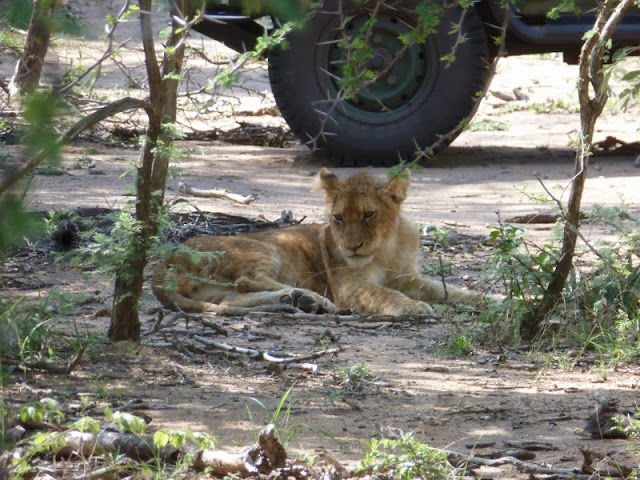 As we finally left Camp Jabulani, making our way towards our next stop, within the same national park, there was one more sight left for us to see:  the elephants.  Jabulani himself, along with some others, were on their morning feeding walk and basically got to say goodbye to us, as we passed them by.  It was a nice way to wrap up our experience at this camp, especially since it was such a pleasant one overall.

The next stop would be up in Savanna, a section of the large Kruger National Park, at Sabi Sands Private Reserve, where my dad and I would now be taking residence and going on game drives.  Ideally we would be seeing a leopard in our days to come at this site, so for now, as certain events have already taken place, I will simply say that lions may just lay around, but leopards are quite elusive, so having some good guides and trackers would be quite helpful.  Still, no worries if it were not to happen, as it has continued to be a great adventure.

Next Time:  The Elusive Leap Of Leopards Lounge Lazily In Lush Locations 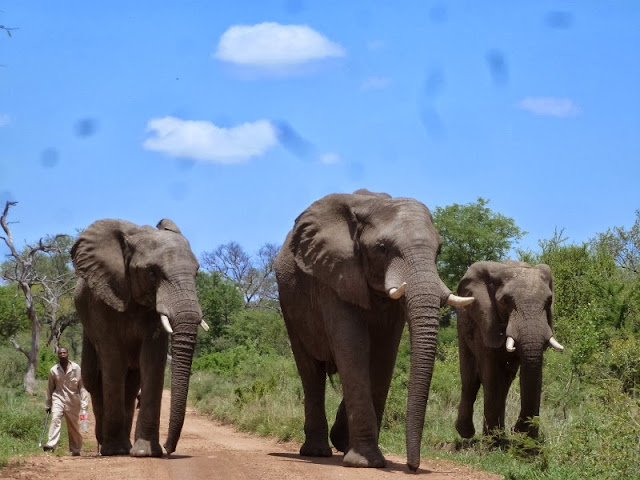 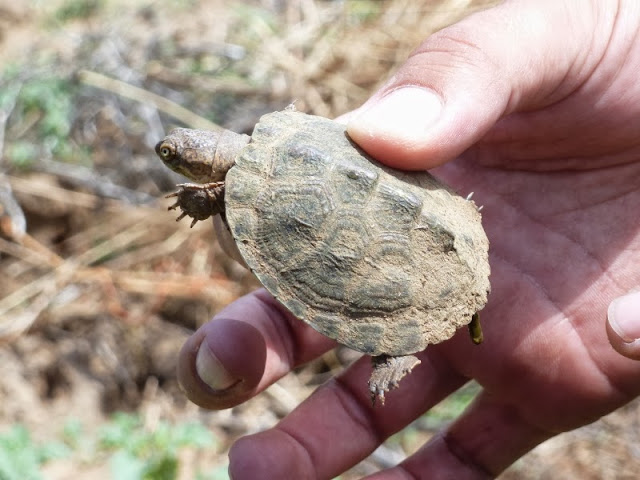 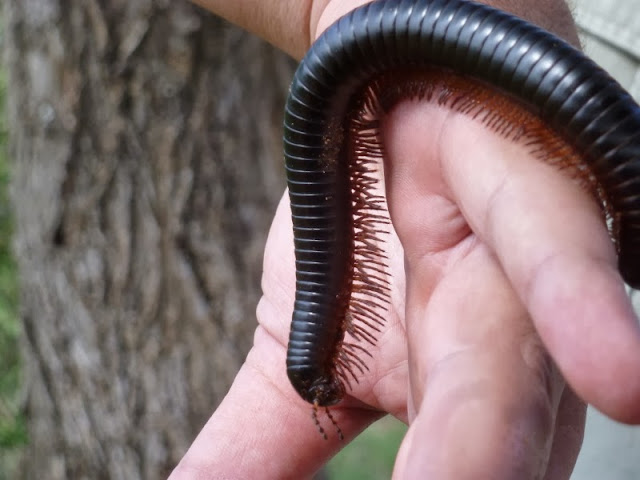 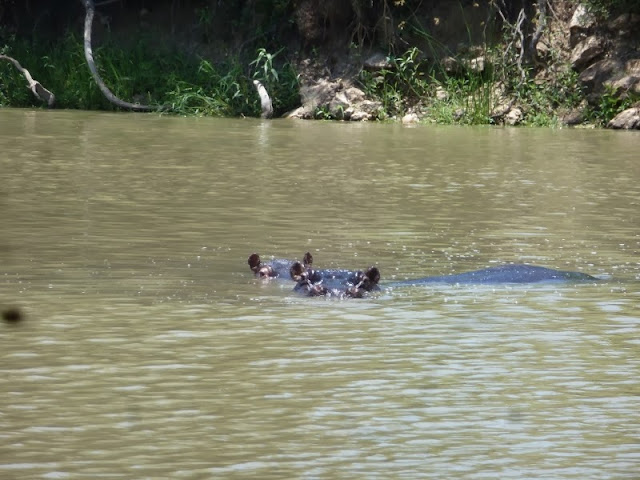 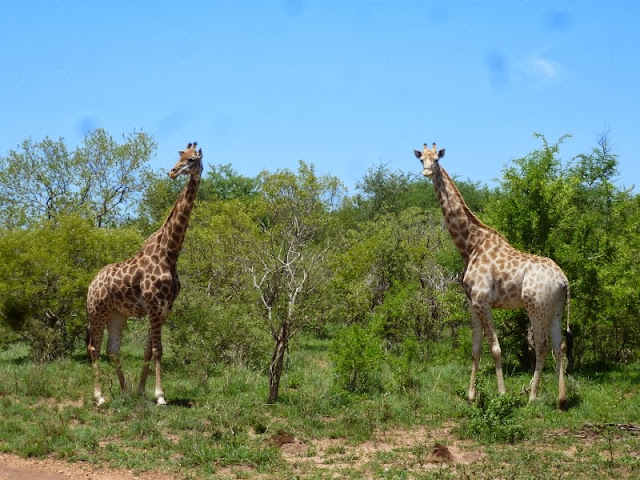 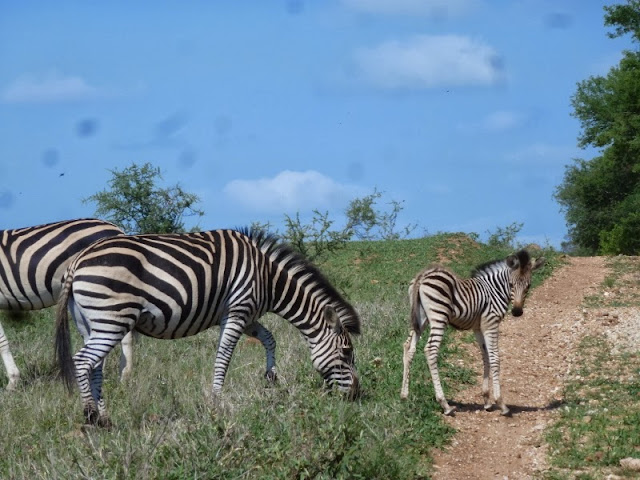 Aaron is a writer/reviewer for WhySoBlu.com.  Follow him on Twitter @AaronsPS3.
He also co-hosts a podcast, Out Now with Aaron and Abe, available via iTunes or at HHWLOD.com.
By Aaron Neuwirth
2013 Africa Animals Big 5 Camp Jabulani Cape Town Essay Lions Mpumalanga South Africa Vacation
Reactions: