‘Riddick’ Returns To The Dark 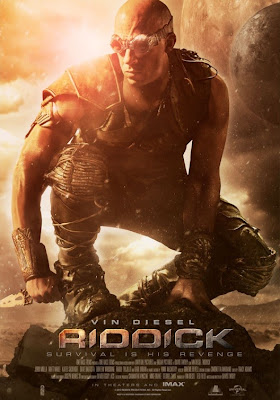 Riddick:  There are bad days and there are legendary bad days.  Today is shaping up to be one of those.

Riddick has returned to the big screen and the character continues to bring Vin Diesel to a place where he can walk the line between bad ass and goofy.  It is nice to see cheesy, B-movie goodness every now and again.  While being entertaining for various reasons does not make up for areas like excessive runtimes or having too many ill-defined characters, I genuinely enjoy the Riddick character enough to want to wander in the dark with him for a time and see if the results are worth it.  Fortunately, I was more impressed this time around, than with The Chronicles of Riddick.  Riddick is certainly scaled down and has more in common with Pitch Black, which introduced audiences to the character back in 2000.  It is by no means a classic and more of an attempt to satisfy those who already are fans, but I was certainly pleased by the areas where this movie shines brightest, even if it meant suffering through some blindingly bad low points. 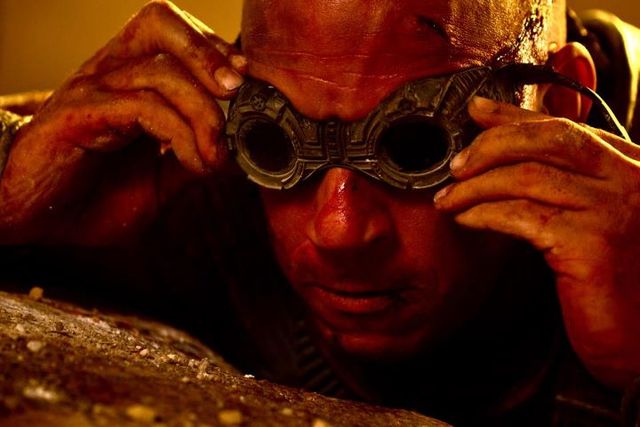 While the film, by necessity, provides some information to tie itself to the previous entry, the plot, for the most part, tries to go back to basics.  All one really needs to know is that Richard B. Riddick (Vin Diesel) is not a man to be messed with, but we start the film off with Riddick stranded on a desert planet.  Riddick is wounded and in search of shelter, allowing the film to really let us sit and watch as a tough man with only his cunning and his ability to see in the dark aid him, as he roams around a planet, encountering the wildlife and getting his lay of the land.  Given Vin Diesel’s love of playing this character, watching him star in a hybrid of Cast Away and Road Warrior makes for an interesting way for writer/director David Twohy to reintroduce us to this character for an extended first act.

The problem with ‘Chronicles’ was how it felt less like a sequel to the very simple and effective sci-fi/thriller Pitch Black and more of a springboard into a role-playing game that no one had ever heard of or was that interested in.  That film introduced all sorts of worlds, races, and prophecies that took away from the mean and lean structure of a premise centered on a “bad guy” forced to work with others, in an attempt to escape an impossible situation.  Riddick attempts to hit these marks again, but whether Twohy realizes this or not, he has still found ways to oversaturate what could make this kind of film work, let alone seems to misunderstand how macho is too macho.

After the film settles into the groove of showing us how Riddick is a man who can handle himself in even the most dire of situations, focus completely shifts to two different groups of mercenaries, both arriving on the same planet with intentions of capturing Riddick.  One is commanded by Santana (an over-the-top Jordi Molla), with a crew that includes MMA fighter Dave Bautista.  The other is commanded by a character with ties to Riddick (played by Matt Nable), with a crew that includes a very handsome and no-nonsense Katee Sackhoff.

The strange thing about the introduction of these two crews is how the film completely ditches Riddick to have us follow them.  After spending a solid 20 minutes or so with exclusively one character, the title character, the entire film’s focus shifts elsewhere and does not return, aside from occasional camera movement to note that Riddick is hiding in plain sight.  It is a neat approach sure, but in a film like this, pacing is important and Riddick is not a tightly structured film.  Were we to have just one team of bounty hunters, with issues unfolding between them, the film could have saved itself a lot of time, but as it stands, the film is overlong and disjointed, based on this decision.

Back to the plot; Riddick is not threatened by these people, but he will need to steal a ship, if he wants to leave this planet and get back at those who attempted to kill him to begin with.  With a storm on the horizon, Riddick is also aware of something else:  this planet has creatures that thrive on darkness and water, which will push the others to deal with Riddick in a more civil manner, if they want his help to avoid further bloodshed.

Bringing back the creature angle was another fine idea.  Twohy once again finds a way to make Riddick work as a true threat that others will have to listen to, if they want to survive.  It does not hurt that the creature ideas are once again quite simple, like Pitch Black, while unique in their own way.  The rules of this planet may not be as interesting as Pitch Black, but at least there is a sense of familiarity.  And speaking of familiarity, I was pleased in the ways that Twohy attempted to connect this film to Pitch Black from a plotting standpoint, as the main notion I am referring to was a nice surprise, but not one that necessitates prior viewing.

It is unfortunate that the majority of the bounty hunter characters do not work better.  Given that this is made as a B-movie, it is no surprise that every character is an archetype of some kind, but the film takes great strides in making sure that everyone is as macho as possible, even Sackhoff.  Poor Katee Sackhoff.  Her character is tough as nails, sure, but she has almost no chemistry with Diesel, which does not make the strange relationship that develops between them work any better than it is supposed to.  At least Matt Nable was able to impress me, given what is required of him.  The same can be said for Dave Bautista, serving as the most entertaining character in the film, next to Vin Diesel.

I do like the fact that Twohy and Diesel enjoy the Riddick universe so much that they essentially made this movie themselves.  There was not a whole lot of demand for another Riddick film, which led to a greatly reduced budget, put together by Diesel and other backers, with Universal only serving as a distributor.  Because of this, while the film looks pretty good for its scope (save for some obvious fake backgrounds and the wonderful complication that is hover bikes), it has a kind of low-budget spirit that a makes a lot of B-movies like it (however cheaper and sillier) work.

At this point, Vin Diesel is not an easy person to take seriously.  Because of this, the movie has a lot of fun adding his narration to certain moments, letting him take part in some action fitting of an 80s action hero, and delivering lines of dialogue too campy to not be considered self-aware.  All of this and Diesel still does great work as this character.  Riddick is also back in R-rated territory, which helps make the tone of the film work, I just wish it knew how to dial down some of the macho stuff, put a little more focus on the gender politics at play, and take out some of the extra padding on the runtime.

With all of that put out there, I still find myself recommending the film.  It has an enjoyable charm that works for me, despite its issues.  Riddick gets some great moments to play up as a character that can “rule the dark”, the film has a lot of necessary humor to keep away from being too serious, and the relief of a simplified plot had me pleased as well.  My confidence in Riddick being a series that really should continue is not too strong, but I was at least happy to step back into his world for one more go around.