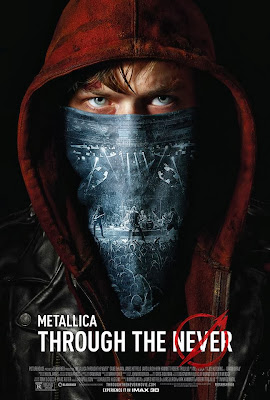 Metallica: Through The Never:  3 out of 5

First thing first, while this heavy metal concert film shares its title with the name of one of Metallica’s albums, the actual song, “Through the Never” does not appear in this film.  It does not matter much, because that is not the band’s best song and film features an awesome greatest hits collection for any fan of this hard rocking group, as they perform in front of legions of fans on an epic stage.  It also happens to have a side story depicting a surreal, apocalyptic adventure.  This is certainly different than most rock concert movies, as it does little to shed light on the actual band and serves as more of an extended music video.  For the most part, this works.  Through the Never will play best for fans, but those seeking a loud concert film with the IMAX 3D seal of approval should be pretty happy with what they get. 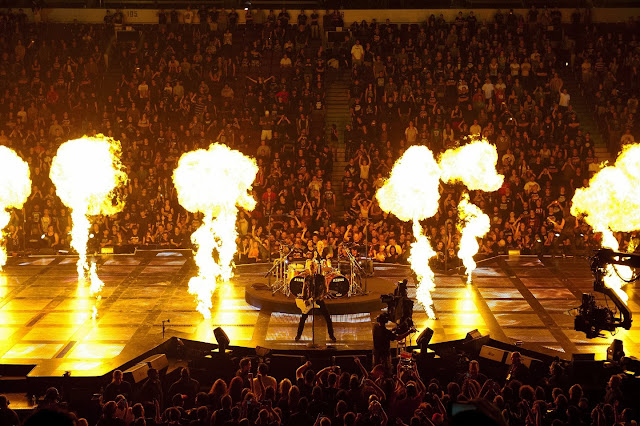 The film begins in a pretty straight-forward manner.  A wide shot of a cityscape focuses its way down to the front of a large arena, where a Metallica concert is set to occur.  We follow a young roadie (Dane DeHaan), as he enters the arena, moves past each member the band, and settles in to enjoy a rock concert.  The concert does indeed get rolling pretty quickly, as the band members (James Hetfield, Lars Ulrich, Kirk Hammet, and Robert Trujillo) walk onto their massive stage, as Ennio Morricone’s “The Ectasy of Gold” blasts on the speakers, with thousands of cheering fans all around.  As the band plays, the roadie is soon called on to perform a task.  The roadie is sent on a mission to meet a disabled truck and retrieve a particular item.  However, this routine task turns into a surreal nightmare, as the roadie is caught in the middle of an apocalyptic warzone.

It is a different approach for sure, as many rock concerts are happier having backstage interviews or offering some sort of insight into what led up to the concert or what others involved have to say after the fact.  Through the Never is simply a vanity project, which is not a terrible thing for fans of Metallica or those who simply want to hear nothing but music for 90 minutes.  There is next to no spoken dialogue and the side-narrative that I have described is more a manifestation of heavy metal anarchy, rather than a compelling story, but it fits in its own way. 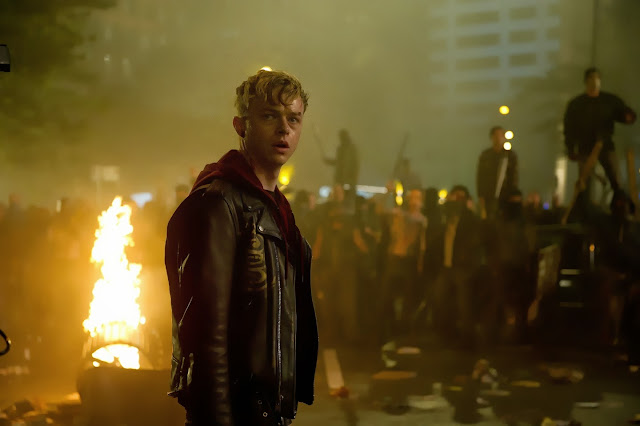 From what I have learned, the band has wanted to do something like this for a while.  They had an idea in mind and things worked out in a way where they were able to bring on director Nimrod Antal (Armored, Predators) on board to help write and plan out the film.  I am a fan of Antal and was quite excited to find that he was directing this project.  Antal has proven to be one of the better workman-like, action directors to me, as he makes relatively low-budget, but well shot action films that are over pretty quickly.  Not the best action movies, but ones that are fun and easy to watch.  He has done that here.  The attempts to spice up the actual concert footage beyond just having a massive and elaborate stage setup do not work quite as well as simply having the concert go on, but I enjoyed the balance between the concert and the roadie stuff.  That said, 85% of this film is the concert, but I had fun with it.

Let’s talk about that stage.  It has been referred to as one of the biggest stage setups ever, but it is certainly the biggest one Metallica has ever had to deal with.  The stage is a massive piece of work, built inside of an arena.  The floor is made up of video panels, there are flame vents all over it, trap doors allowing for cranes to rise up and build giant statues on the spot; simply stated, this thing is pretty amazing.  With 24 cameras in play to capture a concert that was filmed over multiple days, Through the Never provides any fan with one of the best ways to experience the band up close (in 3D and on an IMAX screen) for a much lower price than a regular concert ticket from a similar distance.  Seeing the real thing vs. a movie is a different conversation, but speaking as a person who is not a huge Metallica fan, I was completely on board with rocking out to this movie. 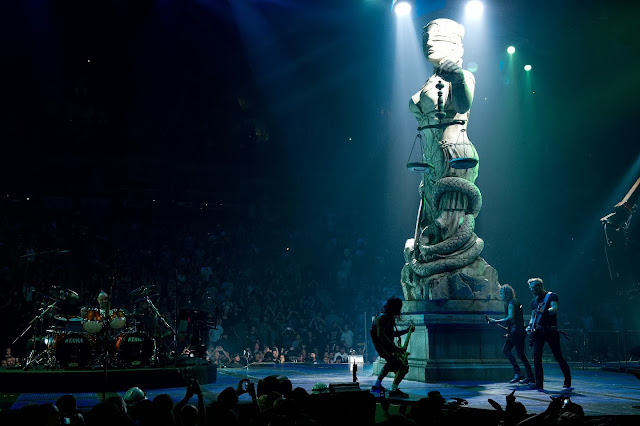 The only issues are ones that come with the territory for this kind of film.  It will test the patience of some, as the film is largely based around a concert and the side story is basically stylized chaos.  As I have explained, do not expect to really take much away from this film, aside from the fact that Metallica knows how to rock an audience.  The film also introduces “disaster mode” inside the concert, which never really feels real or like the audience is in any danger.  There is also the abrupt ending, which seems out of place, as if the film was going for something that I didn’t really care about.

If anyone wants to watch a really compelling film about Metallica, they should check out Metallica: Some Kind of Monster, which really delves into how the band functions and what they went through during a tumultuous time.  If anyone wants to watch a fun concert film featuring Metallica, they should check out Through the Never.  It is entertaining for metal fans, has something different to play along with the concert, and has a solid soundtrack that sounds amazing in a great theater, such as the IMAX I watched this film in.  Check this film out, if you think it’s the one. 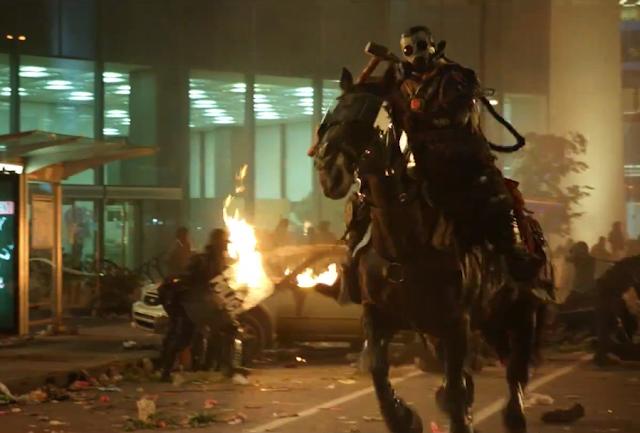 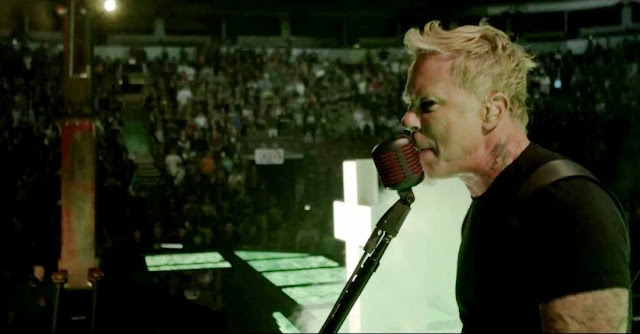 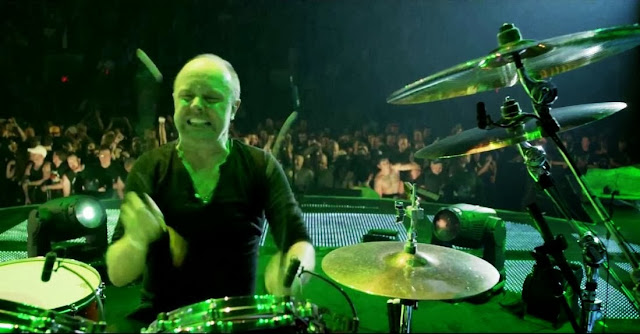 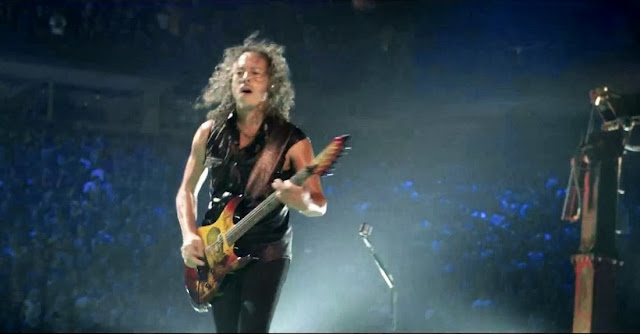 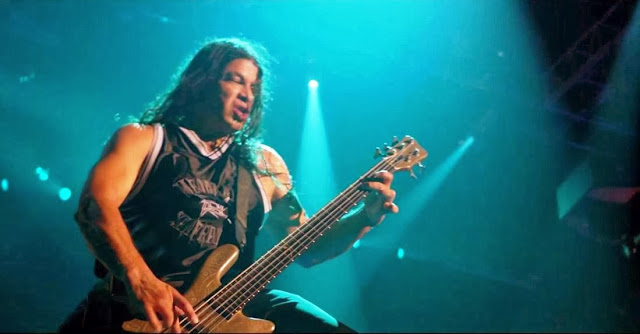