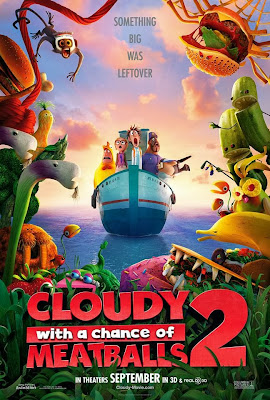 Brent:  What is that?
Manny:  Tacodile…Supreme!

Four years ago I was delighted to walk out of Cloudy with a Chance of Meatballs with a giant grin on my face.  I went into that film not knowing what to expect and was overjoyed to find that it was this wonderful animated comedy, complete with great imagination, animation, a sense of irreverence that fits of the style of humor The Muppets have exhibited in their show and films, with the way it balances the jokes for people of all ages.  ‘Cloudy’ has since stood as one of my favorite animated comedies of the past several years.  Now we have the sequel, which has the task of following up something that I hold quite high esteem.  It is very fortunate that this sequel lives up to its predecessor, as it finds away to be creative in a new way, while continuing to maintain the same level of comedic spirit.

Cloudy with a Chance of Meatballs 2 picks up exactly 8 minutes from where the first film left off.  The town of Swallow Falls has been destroyed by the giant food that plagued the world in the previous film, forcing its residents to be relocated to San Franjose, CA, while the Live Corp Company cleans up the island.  Fortunately though, the series’ hero, Flint Lockwood (voiced by Bill Hader), has been hired by Live Corp, where he can hopefully share his ideas for inventions with its creator, Chester V (Will Forte).

As the months carry on, Flint is told by Chester V that the cleanup plans are not going as smoothly as anticipated, as the food machine from the first film has created a new problem.  Flint is tasked with returning to Swallow Falls to learn more about this issue.  Upon arriving with his girlfriend Sam Sparks (Anna Faris), his dad (James Caan), his loyal monkey (equipped with a though translator) Steve, (Neil Patrick Harris), and his friends Brent (Andy Samburg), Manny (Benjamin Bratt), and Officer Earl Devereaux (Terry Crews), Flint discovers that the food has evolved into living creatures.  As the group faces tacodiles, shrimpanzees, mosquitoast, and more, Flint will also learn the true nature of this food and nature hybrid world.

It is fun just to describe the nature of this story, but the film has so much more to offer.  There are many ways that Cloudy 2 could have just re-hashed (or re-heated) a lot of what made the first film work, but it takes different steps to produce a lot of its comedy.  Obviously the ‘foodimals’ are a big step for where a lot of this film’s creativity comes from, as opposed to a storm of giant food, but it really does a lot to change how this film’s structure works.  Sure, one can boil it down to “Flint must use his nerd brain to solve another food-related problem”, but there is more to it.  While the first film did a lot to spoof disaster movies in its approach to the main plot, this sequel is more about tackling “Science Vs. Nature” films like Jurassic Park, King Kong, and Avatar.  I love that.  I love that chances were taken.  One would not think that there was a whole lot more ground to cover in this sequel, but it is clear that the imagination was there and the team involved had a ton of fun coming up with these foodimals.

There is more to it as well.  The Live Corp Company is an obvious parallel to companies like Apple or Google, but not done in a malicious way.  It uses this jumping off point to get things moving, open up new environments, and find ways to poke fun at its obvious plot beats, such as making the villain so obviously evil.  Directors Cody Cameron and Kris Pearn take over for Phil Lord and Chris Miller (who are off making The Lego Movie, which looks similarly hilarious) and have done a fine job of keeping these sorts of elements in a place familiar to how the first film handled them.  The humor balances the obvious and cutesy jokes with some really sly and sarcastic humor, which in turn keeps it balanced for all audiences.  Writers John Francis Daley, Jonathan Goldstein, and Erica Rivinoja have done a good job of putting together a clever screenplay that keeps the humor balanced with a sense of urgency in the plot and having likable characters.

This movie looks and sounds great as well.  While the first film certainly went for a sci-fi/action vibe in its depiction of man vs. food, ‘Cloudy’ 2 is more of a fantastical adventure and the world created is wonderfully realized in all its colorful innovations.  The foodimals are all very cleverly designed, ranging from cute (Barry), to awe-inspiring (Wild Scallions), to …a tomato.  Each environment is rich in detail and color.  And the various old and new characters are all fun to watch.  The score by Mark Mothersbaugh continues to balance playful beats with grand scale excitement, as the various big action moments occur.  It also doesn’t hurt that this incredibly talented voice cast is a lot of fun.  Bouncing Bill Hader and Will Forte off each other is practically a no-brainer, but the wild energy that comes from Andy Samberg and Terry Crews (who steps in for Mr. T this time) is just as entertaining, let alone the work from the rest of the cast as well.

Finding things to mention that hold this film back from reaching a higher status is a bit difficult, as Cloudy with a Chance of Meatballs 2 is enjoyable in the same way as the first film was, but it does mostly come down to whether or not one enjoys this kind of humor.  The approach is not quite traditional, which I know can throw some people off.  I also feel like I may be writing some similar thoughts when Anchorman 2 arrives this winter, as it can be hard for a film to capture the same sort of magic so many years after the first entry in a series.  It is fortunate that Cloudy 2 does not really run into that problem, though I will say it seems a bit happier to knock you on the head with its themes this time around.  Still, when you have a runner about seeing a literal leek in a boat, along with a subplot that involves James Caan teaching pickles to fish, I am not sure worrying about subtlety really makes a difference.

I had a great time with Cloudy with a Chance of Meatballs 2, which is great, because I haven’t been a huge fan of the crop of animated films that have come out so far this year.  The film throws a big plate of fun at its audience and knows how to make most of it stick.  The jokes come flying at you (in 3D) at a fast pace, the film looks great, the voice cast is solid, and the imagination on display is wonderful.  A good time can be found with this film, so now it comes down to seeing if one can spot and name all the different foodimals presented.

Officer Earl Devereaux:  It’s enough to make a grown man cry…but not this man!  Get back in there tear! 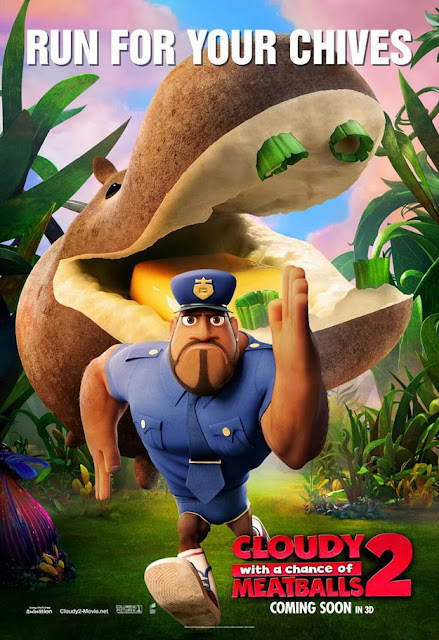 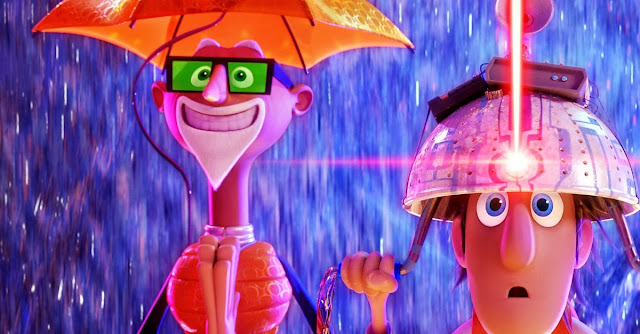 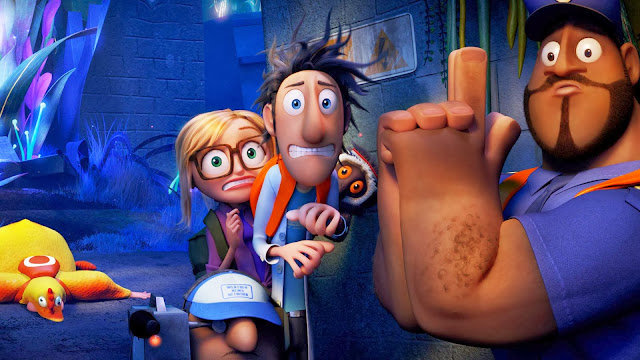