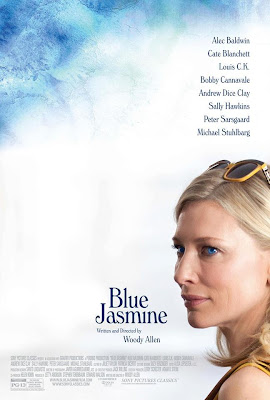 Ginger:  She’s not just broke, she’s all screwed up.

There a few main thoughts I have in regards to the latest…scratch that, this year’s Woody Allen film, Blue Jasmine.  First off, Cate Blanchett is one of the actresses that immediately come to mind when I consider who are among the best working today.  This film contains one of her best performances.  Secondly, here is a great example of Allen coming into one of his peaks again, as he tends to go up and down in terms of his current outcrop of films.  And lastly, Blue Jasmine is very different from a majority of Allen’s other films, which is an interesting quality unto itself.  For a man who has been consistently releasing films for the past 40 years, Blue Jasmine moves away from a certain mold and embraces reality in a way that Allen has only explored so often. 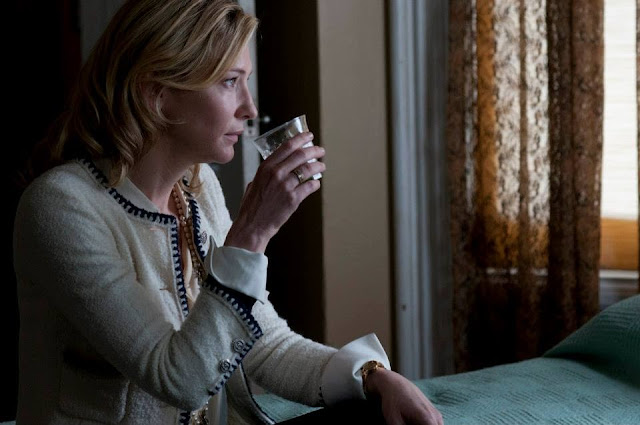 Cate Blanchett stars as Jasmine, a New York socialite whose life has been rocked, following the imprisonment of her corrupt, businessman husband Hal (Alec Baldwin).  With her life falling to pieces, Jasmine relocates to San Francisco, where she moves in with her sister Ginger (Sally Hawkins), while attempting to pull herself back together.  The film provides flashbacks to Jasmine’s former life full of spoiled glamour, but we are given a large sense of who she is, now that her life has fallen to pieces.  Other characters emerge, which mainly include the men in Ginger’s life:  her former husband Augie (Andrew Dice Clay), her current boyfriend Chili (Bobby Carnavale), and possible new suitor Al (Louis C.K.).  While Jasmine criticizes the men Ginger settles for, she herself is in a state of disrepair, as she attempts to find a way out, while also dealing with her life’s stress manifesting itself in unfortunate ways.

Blanchett is simply terrific as Jasmine.  Everything about this character becomes fully-realized, but wisely does not allow her to be a character we must either fully sympathize with or love to hate.  She has qualities about her that are frustrating and annoying, but she also has a sort of drive that was taken away from her, making it sad to really see what state she is in.  Jasmine has a sharp tongue and the attitude of someone that thinks they are better, but the understanding comes in, as we see more of what her life use to be and learn more about her lack of really knowing any other kind of life.  Both the flashbacks and the current day details we learn are not excuses for the character’s actions, but interesting looks at why Jasmine acts the way she does.  In all of this Blanchett excels, providing herself the opportunity for what is sure to be a ton of awards consideration later in the year. 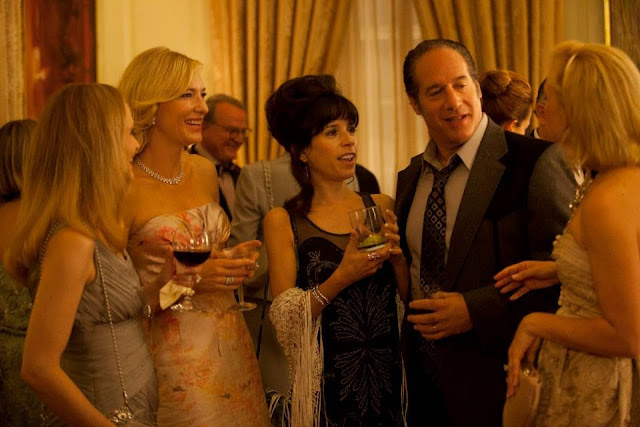 Now, as much as I find the film to excel based on what Blanchett brings to her expertly scripted part, the rest of the cast is incredibly solid as well.  I am a big fan of Sally Hawkins as an actress and I really loved what she brought to the role of Ginger.  She plays the “poorer” sister that Jasmine never really wanted to involve herself with, after being swept away by her rich husband, but all that we learn about Ginger is just as fascinating and certainly more relatable.  All the additional members of the cast provide various forms of entertainment as well, fitting into the world around Jasmine and Ginger.  Baldwin has the exact kind of knack for playing this Madoff-like character, while Andrew Dice Clay manages to walk away with being perhaps the noblest person in the film.

A real treat comes from the way Woody Allen has approached this screenplay.  Blue Jasmine has all the wit and pronounced dialogue rhythms that people are used to, but the film veers into dramatic territory so smoothly.  This film is certainly not an out and out comedy, as it has too much tragedy to go with the characters, but the tone moves from being lighter to darker a lot and never stops being an absorbing film.  The flashback structure provides the film with context, but also serves as an interesting tool, which Allen has rarely utilized, let alone the notion of bringing in modern day events in a way relevant to the plot. 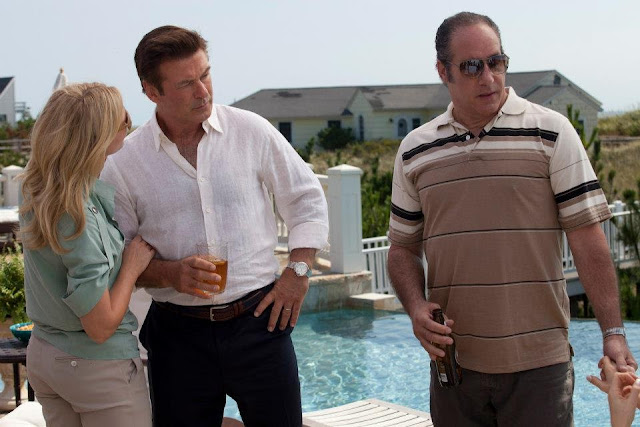 Taking a break from his European vacation, Allen has also chosen to film in San Francisco this time around.  The film certainly has its share of nicely shot scenes, but he never tries to emphasize it, which is something I have noticed in his recent films set outside of the United States as well.  He gets that these are places with sites to see, but still maintains character focus.  With that said, it should be noted that Blue Jasmine pushes Allen into using a whole different aspect ratio for his film, which he has only done two other times in his career.  Perhaps Allen really did want people to find beauty of the city, but just within the bounds of a wider frame.

Everything really comes back down to Jasmine in this film.  While Blue Jasmine is well shot and contains a wealth of characters to become involved with, the film is serviced best by this character that is allowed to struggle and deal with her situation, while allowing the audience to see all of who she is and determine what they really think of her.  The film is spirited in a way that sells her relationship with the other characters, but also focused on letting us in on the mind of someone who is having a meltdown.  There may be a lack of Woody Allen’s nervous joy, when all is said and done, but it also sends you off on a more interesting note than many films.

Jasmine:  Anxiety, nightmares, and a nervous breakdown; there’s only so many traumas a person can withstand, before they take to the streets and start screaming. 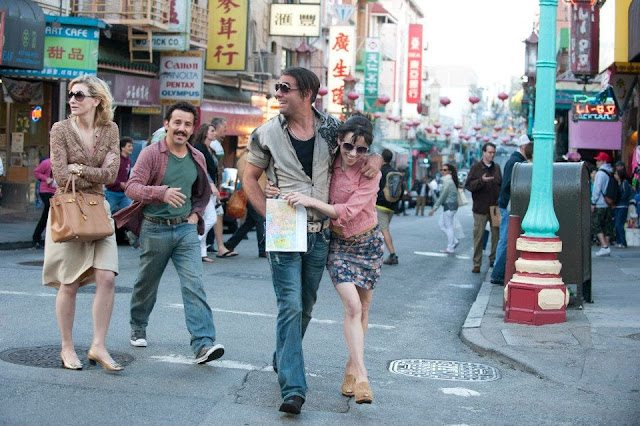 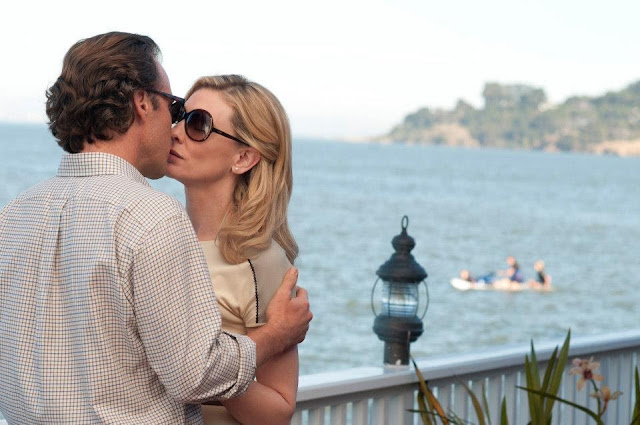 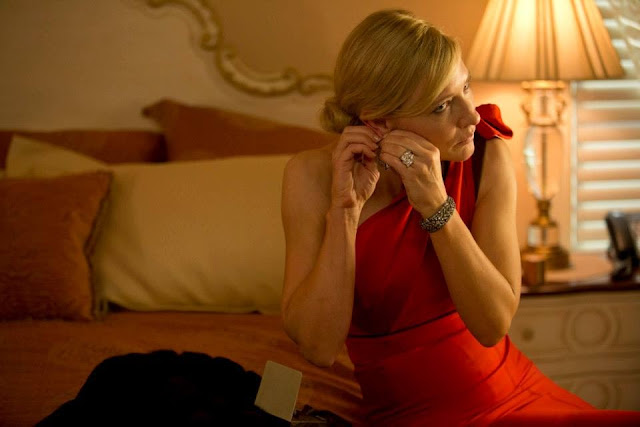