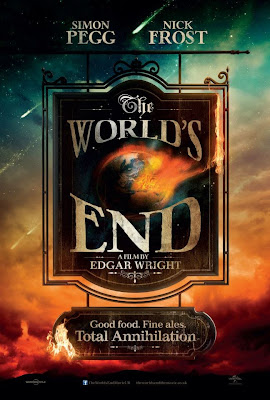 Gary:  We’re just five friends, on a night out, having a good time…

It is always an interesting task, when it comes to providing a critique of one of you most anticipated films of the year from one of your favorite filmmakers.  The World’s End is the final entry in the thematically connected “Blood and Ice Cream Trilogy”.  The films that led up to this finale are 2004’s Shaun of the Dead and 2007’s Hot Fuzz (both of which are favorite films of mine).  All three of these films were written by Edgar Wright and Simon Pegg, with Wright directing each film and Pegg starring in each, along with his best mate Nick Frost.  I noted the years, because The World’s End is arriving quite a bit of time after the last entry, but it is fitting, as The World’s End is about growing up, among other things. The creative team involved has developed as filmmakers over the years and this is reflected in how this film continues in the tradition of showing off madcap humor, action, and heart, but also finds a way to acknowledge how times have changed.  I have also failed to mention that this is a wild ride with some big sci-fi surprises, but the core of this film is just as strong as its hilarious and exciting exterior. 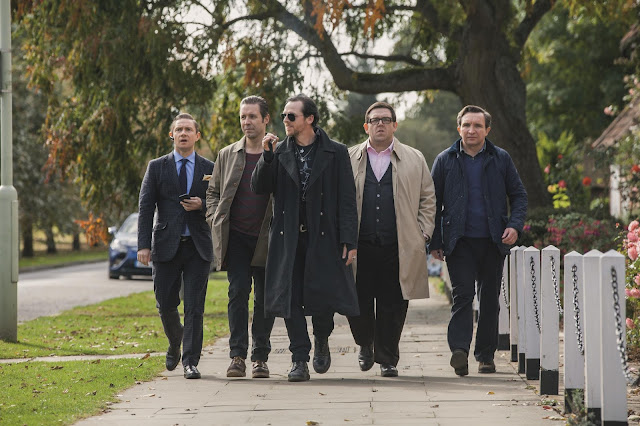 Simon Pegg stars as Gary King, a 40-year-old man desperately trying to maintain the life from his teenage years, which were nothing but wild parties, good times with his friends, and trips to the pub.  In an effort to avoid his own problems, Gary attempts to reunite his childhood friends, “The Five Musketeers” (played by Nick Frost, Paddy Considine, Martin Freeman, and Eddie Marsan), and return to their hometown to attempt an epic pub crawl that they were never able to complete.  The idea is to visit 12 different pubs and drink a pint at each, but his reluctant friends are not exactly keen on the idea.  They join up in the plan anyway, but things definitely become exacerbated upon discovery of a town secret that could threaten all of mankind.

That last bit is incredibly vague, but there is definitely a lot of joy to be found in learning the big twist in the film.  The initial reveal is key.  As an audience views this film for the first time, the number of surprises that occur throughout make for a unique experience the first time around.  Rather than knowing straight up that the film will be directly paying homage to something specific like zombie movies in ‘Shaun’ or action movies in Hot Fuzz, The World’s End is decidedly burying the lead for quite a while, letting you dig in with the characters, before really knowing what is going on (this can be said about the prior films as well, but those were certainly more explicit in the type of genre film they were going to be from the get go). 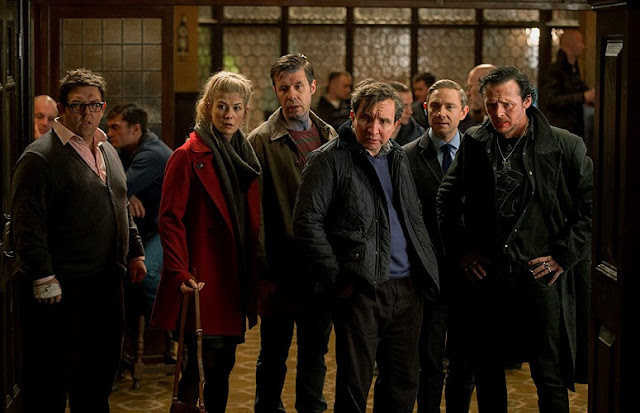 Along with the other films in this trilogy, another key joy is found in rewatchability.  As of now, I would say that The World’s End, despite how much I enjoyed it, is probably the least favorite of mine in this trilogy, but that has more to do with not having seen it as many times (as of now).  Edgar Wright and Simon Pegg have a knack for layering tons of jokes within their films and while it was initially very funny and perfectly comprehensible, future viewings will continue to reveal so much more about all that went into tying everything together.

Never mind watching it again though, let me get back to why it works now.  The movie is really funny, with other elements to chew on as well.  There is certainly a darker edge that lurks in the background of this film, as Gary’s friends all resent him for various reasons and we get the idea that Gary is going through some serious issues in this life, but that does not stop this film from having a lot of fun.  The dialogue is fantastic, as is the cast’s chemistry with one another.  Each cast member, including Rosamund Pike, who shows up later on and fits right in, has a ball getting to fire off one-liners and utilize running jokes and call backs to their full potential. 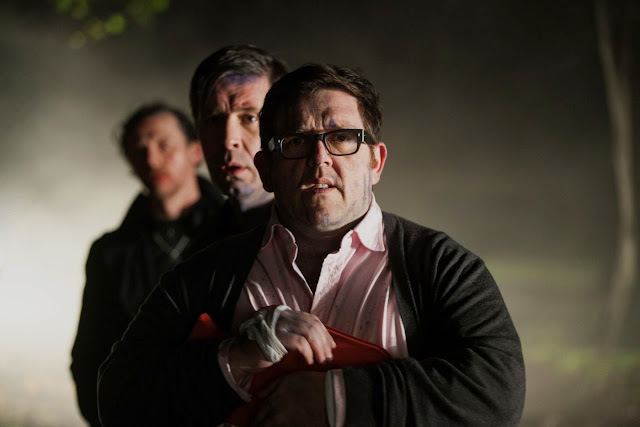 Action is also a big part of this film.  Edgar Wright has continued to show that he is just as adept at making action movies as he is at making comedies, which is something that I hope is not overlooked.  Working with Brad Allen (a directing vet from Jackie Chan’s stunt team), Wright was able to create highly entertaining and incredibly realized action sequences that work as both visual delights and great compliments to the comedy that this film is.  Whereas Wright’s work on Scott Pilgrim Vs. The World led to hyper-stylized fight scenes, The World’s End is full of very fluid action and cleverly edited “long takes” to make for some truly memorable action sequences and some of the best drunk fighting this side of Drunken Master.

Assembly on this film is truly impressive overall.  While some may feel too much slack towards the beginning of the film, compared to the higher octane-levels seen in the later parts of the film, I have always been fond of the careful set up and dryness of the humor that is established early on in these films.  It does not hurt that it looks great, with cinematographer Bill Pope really delivering on setting up the environment early on and twisting the look once the various reveals occur.  Edgar Wright clearly does not slouch when it comes to making his films feel as cinematic as possible and he teams up with some great filmmakers to approach these genre-bending features.  It also almost goes without saying that the soundtrack and score for this film are wholly appropriate and a blast to enjoy.  Given that Wright is such a geek-friendly director, it continues to make sense that he has keen senses that work to his advantage when it comes to finding the right beats to go along with the way he pays homage to other genre films. 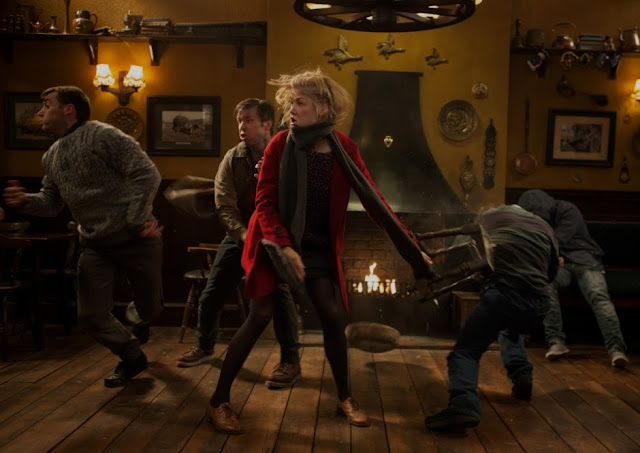 The only flaw I see may be something that I can better iron out during my eventual rewatches of the film, but it comes down to how successful the overall theme is pulled off.  Given that the cast contains very good actors, capable of delivering strong performances, it is actually when the film is at its most raw that it slightly stumbles in recovery.  I am mainly pointing at the ending, which hits the audience with some dramatic reveals, only to settle for solutions that feel a bit overly ridiculous.  It may seem strange to question how ridiculous is too ridiculous, but watching the film and seeing how high certain repercussions are, based on certain decisions, it ends up feeling like a bit much.  The World’s End is definitely a film that does not conform to too many standards of a studio blockbuster, despite the high stakes that it sets, but I cannot quite say that the arcs seen in the film were fully pulled off.

This matters little however; as I am way happier to recognize the film for how ambitious it strives to be, in the midst of also being a hilarious and exciting feature.  The World’s End is a blast to watch, especially when you begin to recognize what it is going for in terms of the genre twist it takes.  With that said, it is also a film about people growing up and finding out what is important to them.  The amount of heart in this film is never lost on Wright, Pegg, and everyone else involved, as they are content to both entertain you and make you care about the characters they have created.  It just helps a great deal that the film is so willing to make you look on in awe at its stunning presentation, assuming that you are able to crawl your way all the way over to The World’s End. 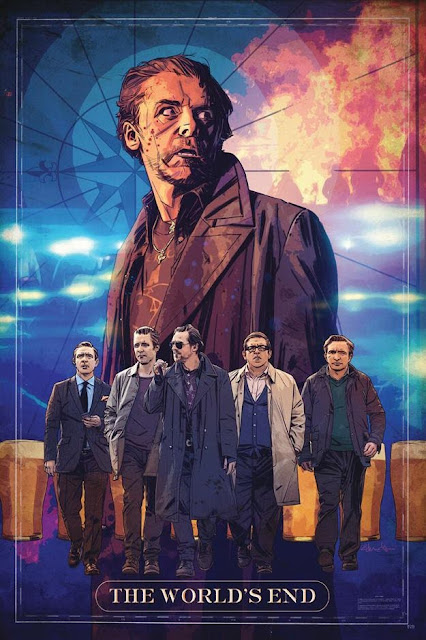 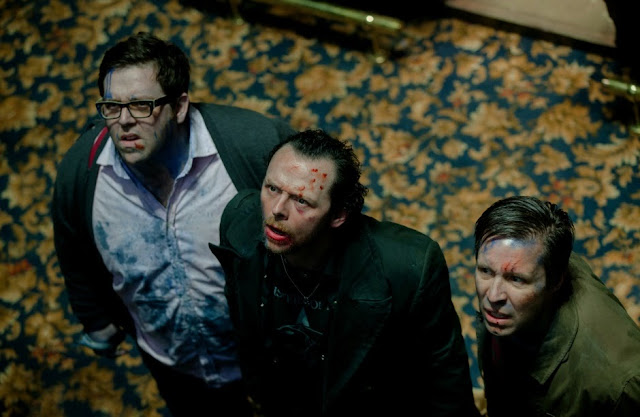 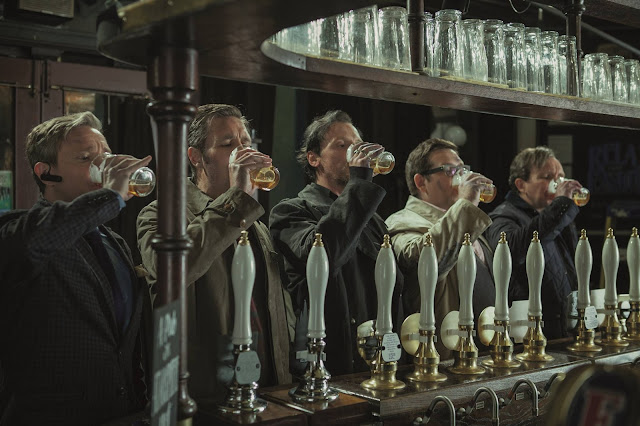