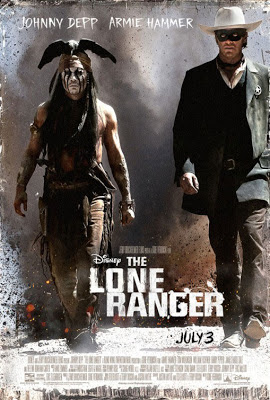 John Reid:  You want me to wear a mask?
Tonto:  There come a time when good man must wear mask.

In 2002, audiences were able to see what came of a failed film that would have starred Johnny Depp.  This film was Lost in La Mancha, a documentary that chronicled the attempt by director Terry Gilliam to make a film about Don Quixote, only to be undone by production and budget problems, forcing the film to ultimately be shutdown.  It is an entertaining documentary, but a sad tale for Gilliam, Depp, and all involved.  After watching The Lone Ranger, a film that has had its own share of issues in making its way to the big screen, I wondered if seeing a documentary about the attempt to make this film work would have been more entertaining.  As it stands, The Lone Ranger is an overlong, excessive, and violent picture that has all the elements to bring the fun sensibilities of director Gore Verbinski’s ‘Pirates’ films to the old west, but only manages to do so, after a long build up.

Based on the popular radio show from the 1930s, The Lone Ranger is the big budget adventure story of two unlikely heroes teaming up to fight greed and corruption.  Armie Hammer plays John Reid, a district attorney who turns into a masked gunfighter, following the murder of his brother Dan (James Badge Dale).  Johnny Depp plays Tonto, an American Indian, who learns of John’s potential, after witnessing his survival in an ambush by the notorious outlaw Butch Cavendish (William Fichtner) and his men.  John takes up the cause as a lone, ex-Texas Ranger and works with the strange, but strong warrior, Tonto, to take down those who have taken things from both of them.  There are a number of supporting players in this film too, including Tom Wilkinson as a railroad tycoon, Barry Pepper as a military officer, Ruth Wilson as Dan’s widow, and Helena Bonham Carter as a brothel madam, with a false leg that doubles as a weapon.

I really wanted this movie to be good or at least one that I could fall back on as a nice piece of summer entertainment.  Not counting the fourth ‘Pirates’ film, ‘On Stranger Tides’, which did not involve director Gore Verbinski, I have been a fan of the other three collaborations between Depp, Verbinski, producer Jerry Bruckheimer, and writers Ted Elliott and Terry Rossio.  The hope that these guys could do what they did for the pirate-adventure film genre with a big summer western was something I believed in.  Alas, while this film is better than other recent summer western efforts (Cowboys & Aliens, Wild Wild West, or the dreaded Jonah Hex), The Lone Ranger does not deliver on its full potential.

A lot of the problems rest on the film’s excess and how interesting it is to really dive into the world that the filmmakers created for this updated version of The Lone Ranger.  I do not want to keep going back to referencing the ‘Pirates’ films, but given that the film’s marketing campaign is so dependent on making you think that this is the wild west version of those films, it is hard not to.  With that said, a lot of what made those movies work better was the introduction of a lot of pirate lore into the film world that I would not say was quite as well-known as it may be considered to be now.  With a movie like The Lone Ranger, there is not a whole lot of interesting new ground to cover in the world of the western and the film does not provide a whole lot, aside from Tonto’s mysticism.  Gore Verbinski certainly knows how to make almost every frame of this film look neat in some way, but the western is a well explored genre in film.

If you put aside the lack of really diving into new ideas, based on the genre we are in, the fall back would be getting a kick out of the rough and tumble qualities of a western adventure film, along with the entertaining thrills and comedic output that comes from another film with the Bruckheimer brand and a script from Elliott and Rossio.  Unfortunately, whether it was a decision made by Verbinski or the intent of the film from its inception, The Lone Ranger really takes its time in between its most fun moments and settles for a dragged out plot and an alarming amount of violence in what is presumed to be a fun adventure film, with Johnny Depp making funny faces.  That is a generality and many may not recall how violent the third ‘Pirates’ film, in particular, was, but the contrast of the violent drama on display and the over-the-top set pieces make for a film that does not do enough to settle on what it wants to achieve.

The Lone Ranger is a long 2 hours and 29 minutes, which can be argued as something that is akin to the western genre: a long runtime and a deliberate pace, but that does not quite make up for the film not doing enough with this time to make it more fun or interesting.  That is not to say that efforts to put this film together do not go unseen or that the budget is not on display (it very much is), but given how much I like Verbinski as a director who knows how to make very fun and visual movies, it is disheartening that this film is not more of that.  Given that the last feature by Verbinski was the wonderfully entertaining Rango, which was also a western starring Johnny Depp, but far more fun and interesting, The Lone Ranger feels like a horse of a different, disappointing color.

There are plenty of things to praise in this film, despite my misgivings.  First off, I think Depp is great.  As opposed to just riffing on Capt. Jack Sparrow, the Tonto character is a man of few words, but one with a great amount of pathos seen in his facial expressions, particularly in the film’s framing device.  Yes, some of Depp’s goofy charm is on display in his interactions with his “Kemosabe” and their horse, Silver, but it works to the film’s benefit.  Armie Hammer is good enough as well.  He is a bit stiff compared to someone like Taylor Kitsch as John Carter (a better, unfortunately maligned, Disney epic), but Hammer fares well enough against Depp.  William Fichtner is notable as well, given that he really sinks into being a really evil outlaw, taking souvenirs from his victims, however graphic a display that may be (seriously, this film is quite violent).

The best that The Lone Ranger has to offer is in its third act, which finally delivers on being a movie I would have liked to see the whole time.  Given that the feature plays a lot like a superhero origin story (and it does have a connection to a recent superhero film), once the excessive amount of time taken to establish the backstory for both characters is put to a rest, the climactic action sequences that take place have all the sense of humor and sense of wonderment that I was basically hoping to see throughout the film, initially.  As it stands, the action in this movie is a lot of fun when it involves the spectacle over the violent battles that occur, but the finale seems like where the film really found its footing.

Good or bad, what is most frustrating is that The Lone Ranger has everything it needs to work, but does not put it together for the best.  A solid, two hour (at most) western adventure, with a strong cast and great production values is instead stretched out into a longer and ultimately unsatisfying experience, regardless of how strong it ends, compared to how it gets there.  There is no denying that this is an exercise in blockbuster filmmaking gone too far, but even while having crafted its own identity, knowing when to say enough is enough would have helped tremendously.  Had this film simply blown up in everyone’s face during production, a nice chronicle of that journey could have led to other lessons being learned, but instead, the film ultimately blows up in the face of the audience and only wishes it was an elaborate firecracker instead of a dud.

Tonto:  Something very wrong with that horse. 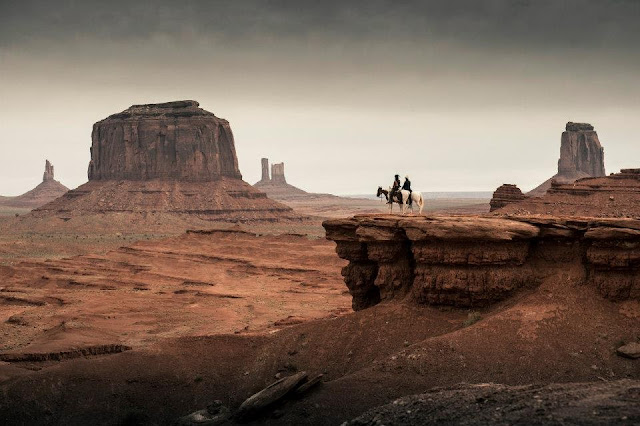