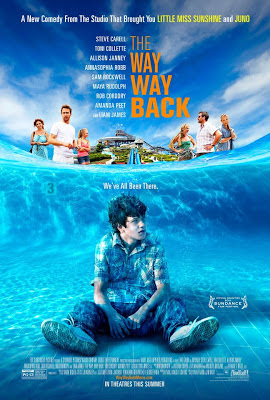 [Note: I originally reviewed this for WhySoBlu.com, as a part of my coverage for the Newport Beach Film Festival.  Check out that site for my upcoming posts of interviews with the cast and crew of The Way Way Back]

Owen:  How sexy does authority look on me?

The Way Way Back is a fairly standard coming-of-age story about an introverted boy opening up to others thanks to good-natured people he befriends, away from his family.  The film is not breaking any new ground nor is it taking a familiar story to the next level in the way a film like Adventureland did, but it is incredibly likable, thanks to some key performances and a winning level of energy.  Not every film needs to be something new and in the case of The Way Way Back, it succeeds by going back to the basics and letting us enjoy a traditional tale. 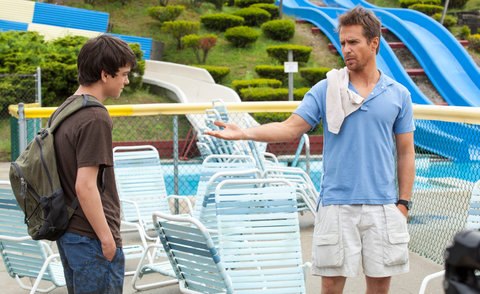 Liam James stars as Duncan, a teenager currently facing his worth nightmare – spending a summer with his mom, Pam (Toni Collette), her dickish boyfriend, Trent (Steve Carell), and Trent’s daughter, Steph (Zoe Levin), at a summer home, away from all his friends.  Duncan, not being the best at opening up and constantly clashing with Trent, finds it very hard to enjoy himself.  He soon manages to find himself at a local water park, away from everyone else, where he befriends the parks manager, Owen (Sam Rockwell), and gets a job, with a lot of the other fun folk that get to work around water slides all day.  Despite occasionally having to deal with the family drama back at the house, Owen gains a lot from his experiences in his secretive life as an employee at Water Wizz.

The Way Way Back features a large ensemble cast as well.  Allison Janney, Rob Corrdry, and Amanda Peet all co-star as the local neighbors, who are happy to share their wackiness in the midst of summer fun.  Maya Rudolph is one of the employees at Water Wizz, who is tired of how childish Owen tends to act, rather than be a responsible manager.  AnnaSophia Robb plays the next door neighbor who is happy to try and befriend the reluctant Owen, as she can clearly see how isolated he initially feels.  Lastly, the writers and directors of this film, Nat Faxon and Jim Rash, also star as other employees at the park. 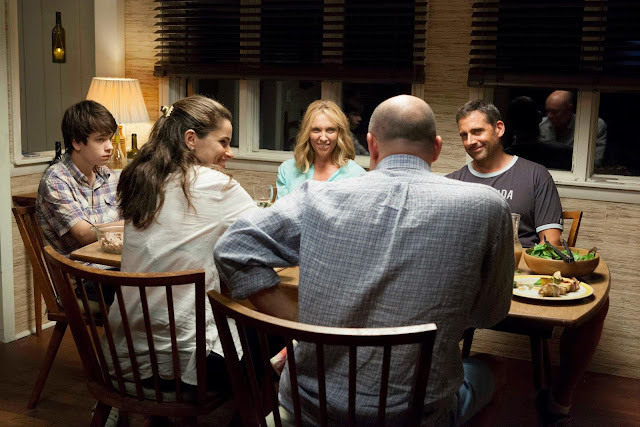 I want to start with Faxon and Rash, who are somewhat fresh off of their Oscar win for adapting the screenplay for The Descendants back in 2011.  I do not know if this film is semi-autobiographical not, but I would not be surprised if it was, which also apparently proves that many writers all had a memorable summer that involved them becoming well-regarded in some quirky job, while going through family drama.  Regardless, the template for this film is incredibly familiar, but the duo has still managed to develop a film that is immensely likable and funny.  Some of that has to do with the casting and some of it has to do with how certain characters function in the story.  While the actual direction of the film is not at all that flashy, it feels similar, in a good way, to other films that rely on the same sort of story and themes.

To speak of what is somewhat fresh or different about this film, I can start with AnnaSophia Robb.  The next door neighbor girl generally has a quirky quality of her, which has made this character one of the bigger clichés of any coming-of-age film.  I would not say that Robb’s performance is outstanding, but I would say that she was refreshingly regular.  As Susanna, Robb plays a character with no quirks to make her truly standout, yet she is not boring.  If the idea was to create a likable character, without being suckered in by some special talent she may have, than the film definitely succeeded. 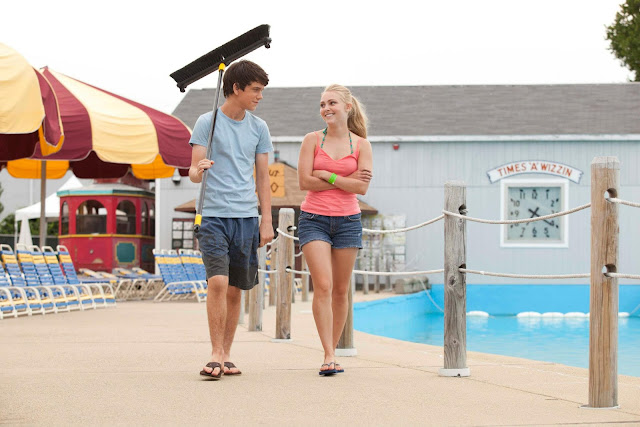 On the other end of the spectrum, Steve Carell is very good at playing against type as an unlikable jerk.  It is not so much that he is a terrible person (though the argument could be made), but it is quite clear that Carell is playing up a character who is quite complex, were one to think about what it was that brought him to be who he is.  In fact, for a film ostensibly about a teenager making friends elsewhere, the adult relationships are handled with true honesty; establishing the messiness of them and the idea that people are quite aware of willingly entering into complicated/bad relationships, based on their current status and options.

Getting back to the fun, comedic side of things, Sam Rockwell is unquestionably fantastic, once again, in a role that is a pure joy to watch.  As Owen, Rockwell gets to be as fun and charming as a character such as Bill Murray in Meatballs, which was played as funny, clever, too cool for school, but receptive to the feelings of a kid who needs a friend.  Rockwell hits all the right notes and the friendship he develops with Owen is incredibly endearing.  Really, all of the characters working at the water park are fun to watch, which is obviously the idea, and a winning success for the film. 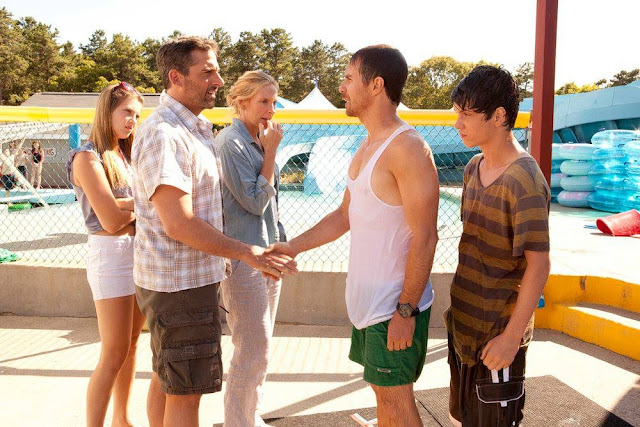 Where the film slightly flutters is in two areas.  The first is with Liam James as Duncan.  Now I am not saying that James is bad in this film; quite the opposite actually, as I think he displays a lot of talent at playing a very realistic teenager (it helps that he is one).    The only issue I foresee is that all audiences may not be as taken with him, as he is pretty down in the dumps for much of the film, which could potentially make him difficult to root for.  His charisma is not as inherent as the role may require for some to accept.

The other issue is how the story plays out.  All of these types of films have a pretty clear arc, which requires an introduction to the characters at the beginning of a summer, the new characters we begin to interact with, the meandering through good and bad times, and the ultimate resolution that signals the end of the summer.  Some films accomplish this basic arc way way more effectively than other films, but The Way Way Back does not quite nail the landing.  It could be a credit to how engaged with the characters I was, but the film only amounts to about 90 minutes and I wish I could have seen more.  It ends up feeling a little rushed in its ending, which slightly set things back for me. 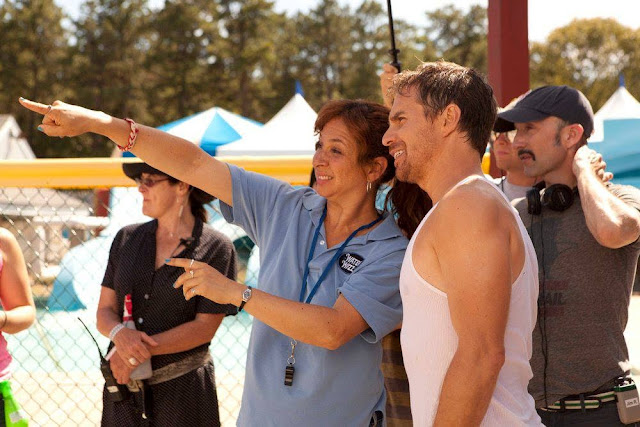 These minor quibbles are just that however – minor.  The Way Way Back is still a highly enjoyable feature with a wonderful performance by Rockwell, as well as the rest of the cast (I did not even get the chance to emphasize how funny Allison Janney is).  It is a familiar story for sure, but a proven formula nonetheless.  The writing is strong, the setting is fun, and the long summer went by like a breeze. 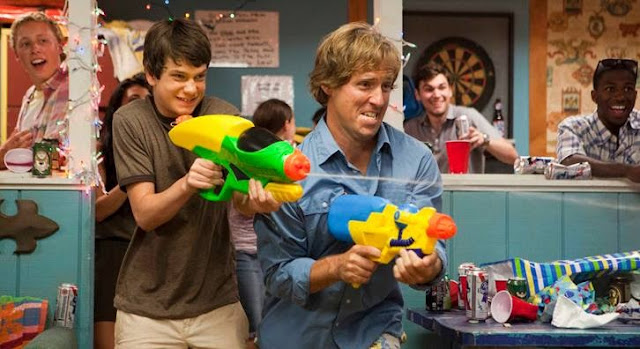