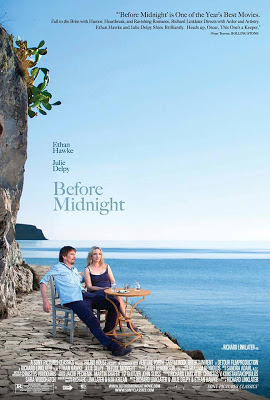 Celine: I feel close to you.
Jesse: Yeah?
Celine: But sometimes, I don't know? I feel like you're breathing helium and I'm breathing oxygen.

In the midst of all of the summer blockbusters going around, I was happy to be just as thrilled by a film that involves nothing but lengthy conversations and arguments.  I am not going to be that person who tries to say that summer blockbusters are nothing compared to exquisite art house films, as I have been happy to enjoy many of the action spectacles so far this summer, but I cannot deny that Before Midnight is a wonderful film that relies on a very minimalist approach to engage the viewer for 109 minutes.  Being the natural follow-up to the previous entries in this series (Before Sunrise and Before Sunset) from writer/director Richard Linklater, who co-wrote the film with stars Ethan Hawke and Julie Delpy, Before Midnight completes a series of films that could easily go down as one of the better film trilogies of all time, assuming we never a see a Before The Crystal Skull.  It is a film that plays out very naturally, does not necessarily rely on knowledge of the previous entries, and provides a perspective on life and relationships that feels very appropriate, regardless of how closely associated one his with this depiction of reality. 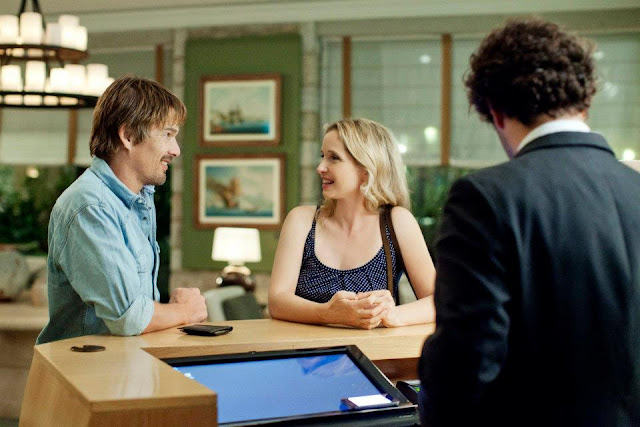 I know there are some who would rather know less about the actual plot than others, and while the trailer reveals some basic beats, I will still tread lightly on the basic setup, which in itself is quite minimal.  Picking up, once again, nine years after the last film, Jesse (Ethan Hawke) and Celine (Julie Delpy) find themselves together on a Greek island.  Jesse has continued his career as a successful author and Celine is considering her next career move.  They now both have children, although Jesse is struggling to maintain the relationship with his son, as he is away from him for most of the year.  Really, the film mainly revolves around these two having extended conversations, sometimes with others, but mainly with each other, as they reflect on the past, present, and future.

So after nailing that vague plot description I have to put out some full disclosure:  I only caught up with Linklater’s previous films in this series in the past year.  I think they are great films for both their screenplays and minimalist style, but I did not grow up with these characters.  Additionally, (and this can be chalked up to my age), I am not one who can claim to know true love necessarily, or at least in a way that reflects characters who have been in a relationship for 10 or more years.  Putting that out there, I can say that I really enjoyed Before Midnight, as I found it to be incredibly well scripted, with wonderful performances by both Hawke and Delpy, which easily reflects who these characters are now versus who they used to be or aspire to be.  To me, it does not matter that I cannot directly relate to these characters, as I was completely engaged by what these people had to say and how their lives have turned out. 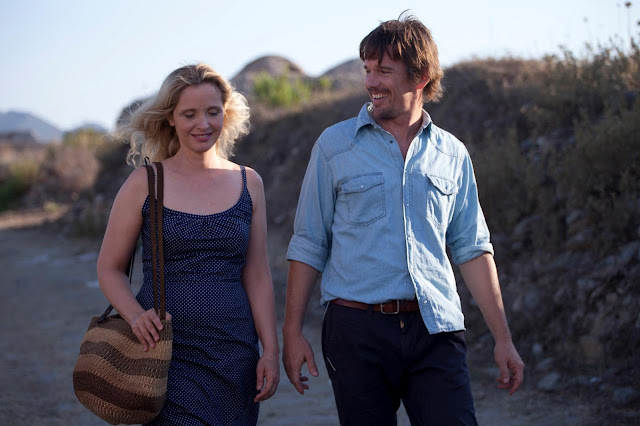 The notion of having a familiarity with these characters already can certainly make the viewing experience of Before Midnight much more enjoyable, but I can still safely say that the movie is not about making explicit callbacks to the previous films.  Information about who these people are and why what they are going through matters, because Linklater, Hawke, and Delpy are all smart enough to know how to construct a film that makes sense, regardless of the viewer’s consciousness of the previous features.  With that said, do I encourage checking out the previous films, regardless of the order you see them in?  Of course, they are wonderful, little movies; however, each film is engaging in its own right.

With Before Midnight, director Richard Linklater continues to show his confidence and growth as a director.  The film functions in almost precisely the same way that the previous films of this series have, letting characters dictate the scenes, while the camera simply follows them along, but an astute eye can see some minor visual touches that show how Linklater has evolved as a filmmaker.  Given that this film is now more about how experience has changed these people, having a filmmaker who is in no rush to short-change agitated conversations for the sake of an easy copout for scenes provides the sense that everyone knows exactly what they want to achieve in the film and Linklater is guiding the ship accordingly.  There may be some beauty in the location, but Linklater does not try to make a show out of his direction, he simply lets the audience absorb.  Similarly, the actors are up to the task as well. 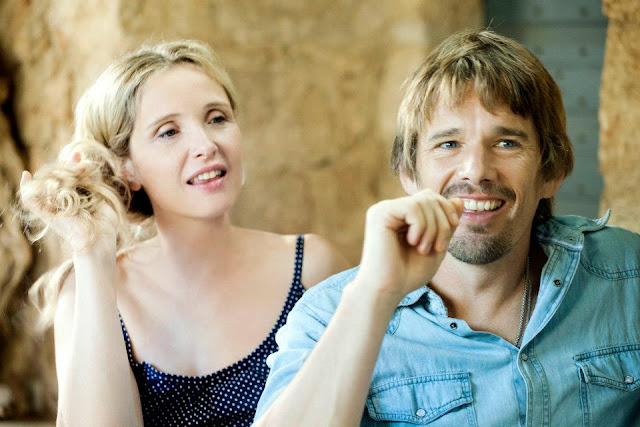 I tend to enjoy Ethan Hawke in films.  He is not a favorite performer of mine, but I know what to expect from him as an actor and I like it.  Having caught up with his Jesse character recently and now watching him in Before Midnight, it seems apparent that he truly is at his best when paired with someone like Julie Delpy.  While Hawke knows how to play up a confident, smooth-talking persona, who equips himself with good articulation and rational thought, he is also very obviously doing so at times.  This is very fitting when matched with Julie Delpy, who appears to really invest in the soulful character that she is playing.  Celine is not a better or worse person than Jesse, but the two have a wonderful chemistry together and in this film that takes place 18 years after the first, in both the film’s universe and in real life, and it shows how they have matured as actors.

Before Midnight is pretty much a triumph.  It is a little film that consists almost entirely of extended dialogue sequences, but I was completely engaged throughout.  The assertion can be made that the film has conversations that border on being too acidic to make it more enjoyable, but given that the actors, who know these characters better than anyone, co-wrote the film with its director, and have decided to once again wait until the time was right to really put it together, I have no real problem with the state of this relationship and the varying tones of the conversations that I witnessed.  I was happy to listen to these characters and see where life has taken them.

Jesse:  You are the mayor of Crazytown, do you know that?  You are! 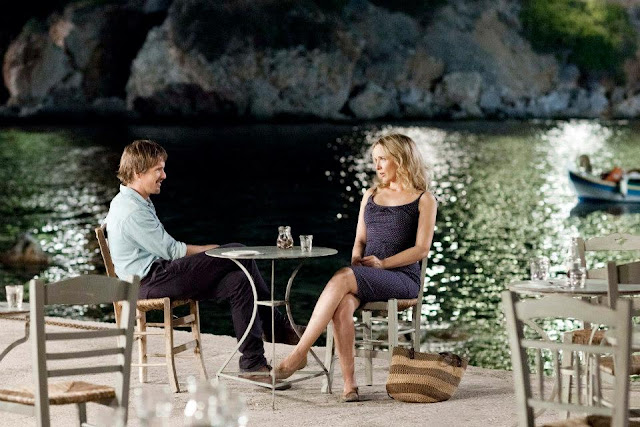 Aaron is a writer/reviewer for WhySoBlu.com.  Follow him on Twitter @AaronsPS3.
He also co-hosts a podcast, Out Now with Aaron and Abe, available via iTunes or at HHWLOD.com.
By Aaron Neuwirth
2013 Films Drama Ethan Hawke Julie Delpy Richard Linklater Romance Romantic Comedy Sequel
Reactions: