‘Oblivion’ Is Gorgeous And Engaging, But Familiar 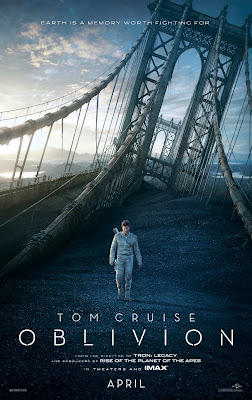 Jack Harper: Is it possible to miss a place you've never been? To mourn a time you never lived?

To speak about Oblivion to those who have not yet seen the film and do not want to be spoiled on what is in store for them, I have to not mention the many different films and sci-fi concepts that it lifts from.  A film I can mention, in comparison, would be Prometheus.  It is not because the films are related from a story standpoint in any way, aside from them both being gorgeous sci-fi features, but more due to expectation versus results.  While Ridley Scott returning to sci-fi, via Alien, to a loose degree, was much more exciting in concept, both Prometheus and Oblivion set up a certain level of expectation, only to both fall victim to familiar plot devices and concepts not as fresh as some may have hoped.  That said, Oblivion manages to accomplish a number of things that are quite refreshing to see.  It looks great (in 2D!), it is strongly acted, and it works as a standalone film, as opposed to one expecting to be a new franchise.  This ‘original’ sci-fi property may not feel excitingly new, but it still delivers in many areas where it really counts. 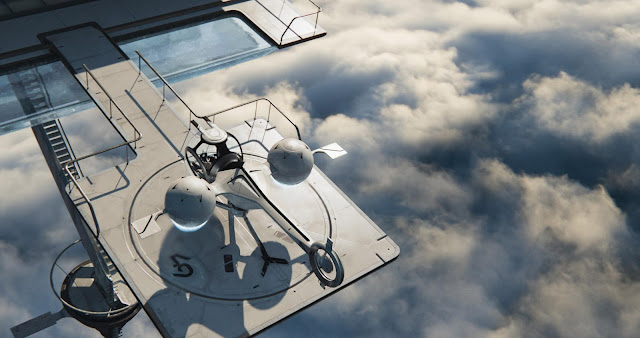 The film takes place in 2077.  An alien invasion led to the moon being destroyed, which, in turn, caused the near destruction of earth.  We are told that the majority of the human race has been moved to Titan, the largest of Saturn’s moons, while some humans have remained in order to harvest what is left of the planet’s resources and support human life elsewhere.  Tom Cruise stars as Jack Harper, a mechanic tasked with repairing the drones that help keep the area secure.  He lives in a tower, thousands of feet above Earth, with Victoria (Andrea Reseborough), who monitors Jack’s progress and reports to their commander, Sally (Melissa Leo), via video link.

Jack spends his days roaming his assigned area, which is basically what’s left of New York, in his space ship, occasionally collecting trinkets of interest that he comes across.  He also suffers from recurring dreams and flashbacks to memories he once had, before having them be wiped in an effort to make him a more efficient worker.  Despite having only two weeks left to work, Jack’s life gets much more complicated after he rescues a mysterious woman, Julia (Olga Kurylenko), whom he recognizes from his flashbacks.  Things are exacerbated even further, once Jack is made aware of a human resistance being led by Malcolm Beech (Morgan Freeman), who tries to have Jack understand that more is going on than he is aware. 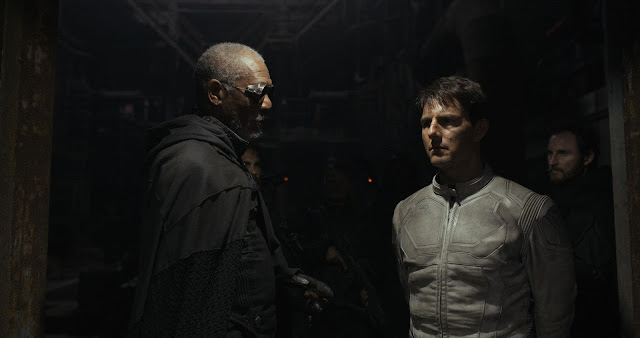 While not the first person to point this out, one of the times I saw the trailer for this film, my mom was with me and whispered, “He’s Wall-E,” into my ear.  That is fairly accurate, as a good portion of this film does feel like the live-action version of that Pixar feature.  As Oblivion goes on, it starts to resemble a number of other features as well.  At a certain point, the word ‘derivative’ seemed like it was trying to smack me in the face, as the film carried forward, but here is the thing; while Oblivion has a few big reveals that are not exactly the freshest, I was not too concerned during the longer stretches of the film, which featured Cruise foraging the land and learning more about his situation.  Oblivion may knowingly be taking from other stories, but it also gets an ‘A’ in its presentation and holding on to my attention.

The story that we are being told is confident enough to reveal itself slowly and never deviate from that story.  While there are various twists and turns in the plot of this film, it plays fair with the audience.  Oblivion may try to mislead the audience, but it never out and out insults us by adding on a ridiculous amount of complexity.  I may have had a grasp on where certain things were going, as the film unfolded more and more, but I did enjoy the journey that I was on.  All of that and the film does not even try to say, “This is just part one, come back in 2015 for the rest of the story.”  While Oblivion establishes a pretty compelling world through the imagery we see and the idea of what would happen if the moon were destroyed, I cannot say I was unsatisfied with where things are left by the end of the film. 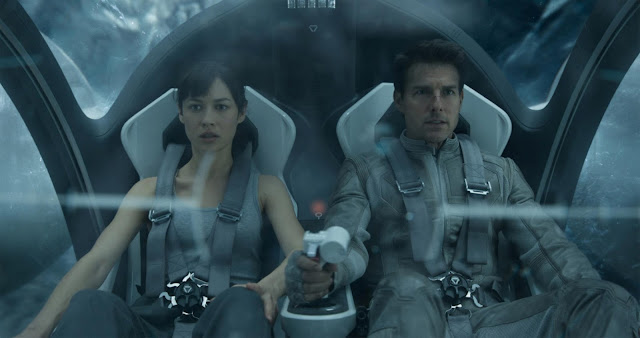 Director Joseph Kosinski, who previously helmed Tron: Legacy, based this film on his own comic, which he put together to essentially serve as his pitch for the film.  He clearly has a lot of love for older sci-fi stories and while the screenplay by himself, William Monahan, Karl Gajdusek, and Michael Arndt is not terribly ambitious, Kosinski shows a lot of confidence in how he has put the film together.  Oblivion features a few terrific action sequences, shot to be tense, exciting, and most importantly – comprehensible, but there really are only a few action sequences.  Kosinski is wisely in favor of having a film that favors the story and characters, utilizing action sequences where they feel needed.  The film is not necessarily slow (there is frankly too much to look at in the film for me to lose interest), but it unfolds its story at its own pace and benefits from that notion.

At this point it could almost go without saying that this movie looks great, but it really does.  Recent Oscar winner Claudio Miranda does a wonderful job at conveying the world that we see through his lens.  The combined use of CG visuals and what seemed to be quite a bit of practical effects work (which could just as well translate as the visual effects looked that good) all served to make for a very good-looking movie, with proper justice done to establishing the world that we see.  Given that much of earth is basically destroyed, it is nice that this somberness is not so much dwelled upon, as it is used to emphasize what is important and what it means for the various characters. 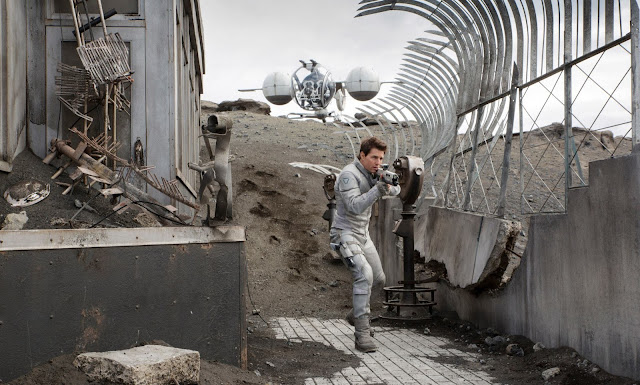 As far as the actors go, I am not sure why I have to always defend Tom Cruise at this point, as he is as solid as ever in his part as an actor.  I would say that people pre-dispositioned to dislike Cruise for whatever reason may not be impressed here, but for everyone else, he does a very solid job at filling in a character who wants to understand the nature of what he is doing, what he is receiving glimpses of in his own mind, and what he is discovering throughout the film.  Morgan Freeman is more or less playing a Freeman-type role, but he always has the right level of conviction.  Olga Kurylenko was impressive to me, mainly because I have not been all that impressed with her until now.  Watching her observe what Jack has become, given that she knows something about him made for an intriguing persona to have her take on.  I could also say that I was impressed with Andrea Riseborough in this film, as she fills a familiar role of someone that will not bend the rules, despite emotion clearly clouding her judgment.

Now I am delivering a lot of praise, but I still think the film is not a tremendous accomplishment.  There are a lot of neat ideas here, albeit many of them have been seen elsewhere.  The film is gorgeous and does often serve as style over substance, but it does take time to tell a story and not just showing off its imagery.  We witness a character journey in a film that also has spaceship dogfights and very cool drone action.  I do wish some of the dialogue did not feel a bit precious as well, but I liked the use of a minimal cast to tell this story, just as I overall enjoyed this movie.  Oblivion may depict a wasteland, but it certainly did not feel like time wasted.

Jack Harper: I can't shake the feeling, that earth, in spite all that's happened, earth is still my home. 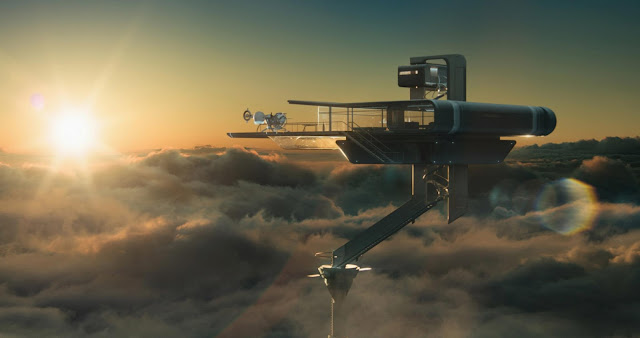 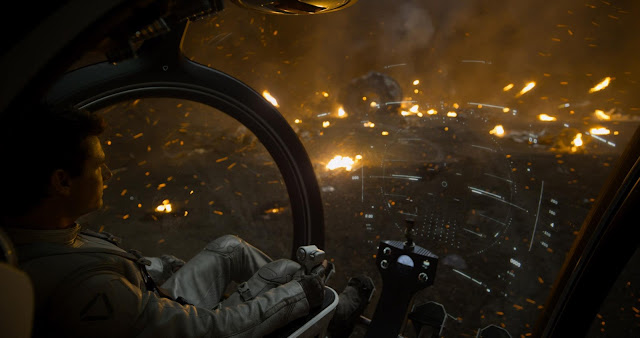 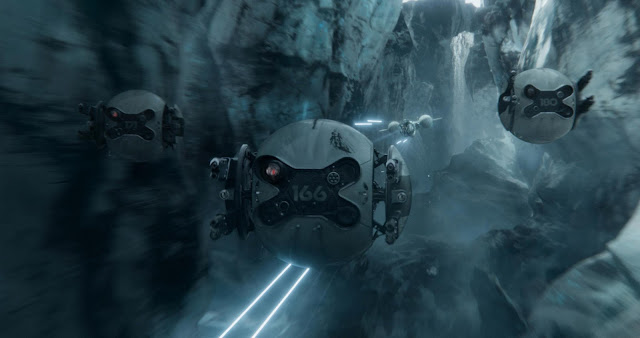