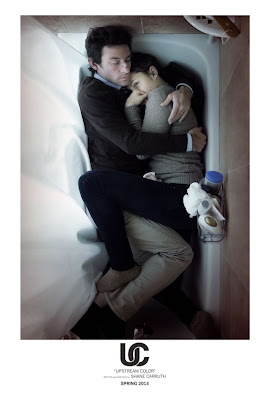 I honestly wish I could delve deeper into certain movies, but alas, I get incredibly busy and can only deal with certain movies to a briefer extent than I would like sometimes.  This is why I write these occasional "brief thoughts" posts on movies I have seen, as I want to at least offer some of my own perspective on them.

Back in 2004, writer/director Shane Carruth released his debut film, Primer, which is essentially the most technical movie ever made about time travel.  It is a very mechanical film that charts the efforts of two people to make use of something they discovered on accident.  Carruth has now returned with Upstream Color, a film that is as entirely complex as Primer, in ways that are similar and different.

In an attempt to go into what the plot is, the easiest way is by providing the brief synopsis originally released at the Sundance Film Festival:  Kris (Amy Seimetz) is derailed from her life when she is drugged by a small-time thief. But something bigger is going on. She is unknowingly drawn into the life cycle of a presence that permeates the microscopic world, moving to nematodes, plant life, livestock, and back again. Along the way, she finds another being—a familiar, Jeff (Shane Carruth), who is equally consumed by the larger force. The two search urgently for a place of safety within each other as they struggle to assemble the loose fragments of their wrecked lives.

The most apparent (and least confusing) quality about Upstream Color is its assuredness.  Carruth continues to operate in an ambitious, experimental way, incorporating a style that is all his own, but in the years since Primer, he has a much better handle on how he wants to present a film.  This also has to do with the increased budget he is working with and his use of what I assume is digital photography to really capture the visuals seen in this film (I was at a Q&A, where Carruth did not want to inform people on what types of cameras he used).

For those simply ready to sit back and watch a film that provides a perplexing level of beauty akin to something like Tree of Life, but on a much smaller and more contemporary scale, Upstream Color can provide that experience for some.  I could further my admiration for the technical qualities of this feature and extend that over to the lead performance as well, given that I believe Amy Seimetz is quite solid in the lead role of an esoteric film (not to short shrift Carruth either, as he co-stars in the film, among his many other duties here).

Obviously, a lot of appreciation for this film will depend on how accepting you are of the “story” being told.  It is a cryptic film to watch, in a way, but not completely incomprehensible.  I can say that I understand the basic beats as to what occurred in the same way that I can say I understand the basic plot of 2001 or Tree of Life.  Whether or not I need a few more viewings to really grasp at and appreciate what is going on, is really the main concern that I have here.  For the time being I can say that I wish I could discuss this film with more people, as it presents a challenge to simply write about, let alone explore on a deeper level.

Upstream Color is certainly layered and full of ideas.  Where Primer was an exercise in filmmaking based around a very technical story, Upstream Color is very much an organic story, relying on much more of an emotional connection that accompanies the technique on display.  Applying any sort of rating is practically futile, as I need more viewings or possible discussion to really get a firm grasp on my overall opinion of the film, but I am certainly glad I saw it.

Aaron is a writer/reviewer for WhySoBlu.com.  Follow him on Twitter @AaronsPS3.
He also co-hosts a podcast, Out Now with Aaron and Abe, available via iTunes or at HHWLOD.com.
By Aaron Neuwirth
2013 Films Amy Seimetz Brief Thoughts Drama Independent Science Fiction Shane Carruth
Reactions: