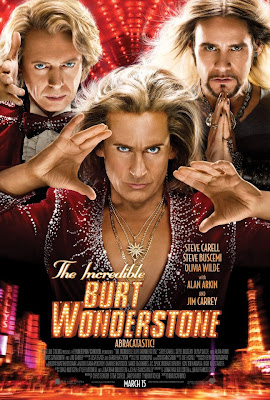 The Incredible Burt Wonderstone:  3 out of 5

Here is a movie that has a promising premise that could have been better pulled off if it was either structured differently or came out a decade earlier.  The idea of competing magicians in Las Vegas is a good one, but The Incredible Burt Wonderstone does not quite have a script to really pull off a 90-minute movie out of this concept.  Despite its short-comings from a story point, however, I do think the film generates a lot of laughs, which is the ultimate goal, of course, as well as create at least one character that I would be happy to see more of.  Comedy is always the hardest type of film to critique, given how much humor registers differently to different people, but a film that makes me laugh is obviously doing something right.  ‘Burt Wonderstone’ does not quite push the envelope, but it does set in on fire and make a dove appear inside of it, which is as good a trick as making me chuckle more than a few times in a movie that is flawed. 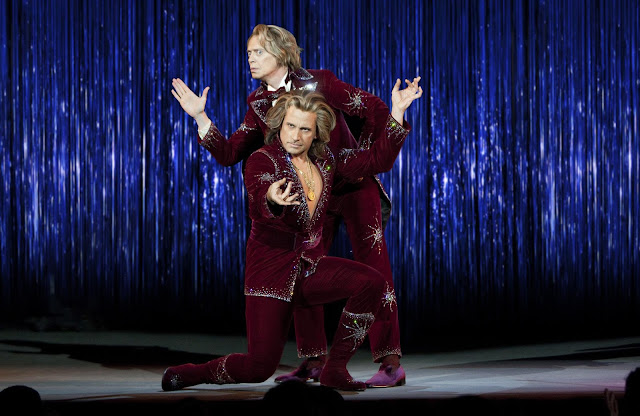 The film opens with a prologue that features a young boy getting bullied at school, only to be given a magic set for his birthday, develop a friendship with another boy interested in magic, followed by a cut to the present.  I am not sure if the bullying stopped, but the two friends formed a successful magic act in Las Vegas.  The two are now known as Burt Wonderstone (Steve Carell) and Anton Marvelton (Steve Buscemi) and they have become outdated.  As the duo performs the same act to a smaller and smaller crowd, a street-magician known as Steve Gray (Jim Carrey) is gaining a higher and higher profile.  Things come to ahead as Burt Wonderstone becomes so self-absorbed that it costs him the show that they’ve been performing at Doug Munny’s (James Gandolfini) casino for years, as well as his friendship with Anton.  Having alienated himself from everyone, Burt must now get it together and reignite the spark that made him want to do magic to begin with.

The Incredible Burt Wonderstone also stars Olivia Wilde as Jane, a former assistant for Burt and Anton’s magic act, who has mixed feelings about Burt, after meeting him.  Alan Arkin also shows up as Rance Holloway, the magician who inspired Burt to begin with and currently takes residence in an elderly care center, having given up the magic trade.  A few people were involved in the development of The Incredible Burt Wonderstone, but the film’s screenplay was handled by John Francis Daley and Jonathan Goldstein, the duo responsible for writing Horrible Bosses.  And lastly, directorial duties were handled by Don Scardino, who has been a long-time television director, most notably having handled a lot of episodes of 30 Rock.  I make note of all this because there are a lot of talented people here and I wish the film was more than just hit or miss. 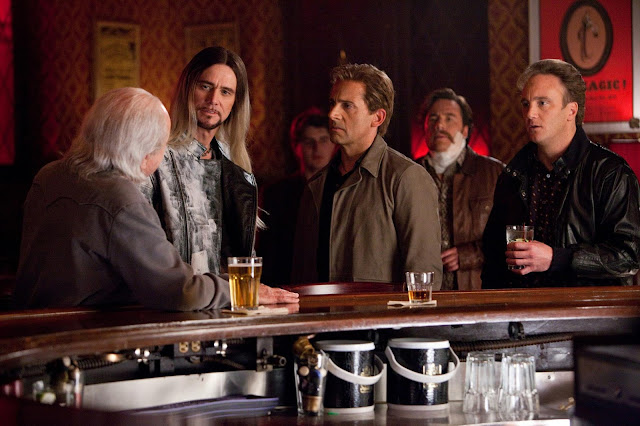 I will say that the film was more hit than miss for me.  Despite its issues from a story and character standpoint, which I will get to, the film succeeded in making me laugh quite a bit.  Magic acts are not really my forte, but I do enjoy seeing it and am familiar with what is being skewered in a comedic way.  One can easily see how Siegfried & Roy, Criss Angel, David Blaine, and David Copperfield (who makes a cameo) are being poked at in the way this film has its characters dress and act.  A lot of goofy hair and costumes are seen and while it may be easy comedy in various instances, it was silly enough to make me smile.

The best example of this is Jim Carrey as Steve Gray.  He creates a great character in this film, constantly making me laugh and utilized just enough to not wear out his welcome.  Gray is a long-haired, tattooed street-magician who practices in ridiculous stunts, rather than traditional magic.  We see him perform acts such as not closing his eyelids and holding in his urine for days at a time.  His attitude is that of a mean-spirited, suave, magician hipster and Carrey really sells it.  He is the ‘villain’ of the film, but Carrey is very much in a supporting role and he gives it his all (including getting ripped for the part) whenever he is on screen. 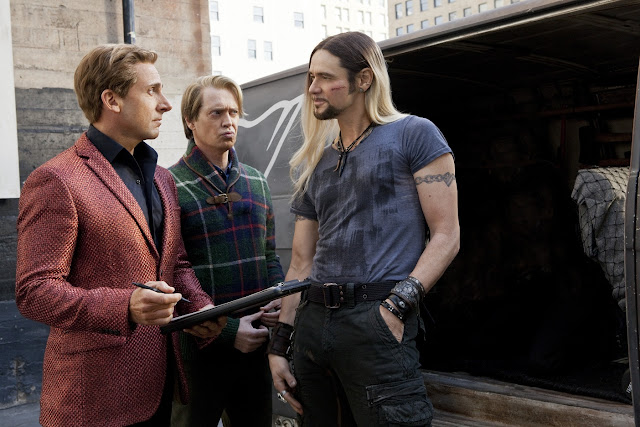 Steve Carell is the true star here, but not as incredible as the title suggests.  This is the Carell who channels all the worst parts of his Michael Scott character from The Office and plays them up here, magician-style.  The way he acts is quite deliberate, as he insults others and plays up his own importance, so it is hard to get on board when he has to have a change in heart midway through the film.  With that said, he does seem to be having fun playing this jerky character.  Somewhat similarly, Steve Buscemi seems to be having a lot of fun too in his much more earnest role as Anton.  I was just happy to see Buscemi back in a film, in another ridiculous role that makes him fun to watch on screen.  Sure, he’s great on HBO’s Boardwalk Empire, but I miss seeing ‘Buscemi Eyes’ on the big screen.  It should go without saying that Arkin is a lot of fun, as well, but I will shout out how much I enjoyed his dark comic reading as to how he accomplished one of his illusions.

Olivia Wilde is here as well, but I saved her for this point in the review because her character represents one of the film’s problems.  Wilde is fine with what she is given, but her character does not have much to offer, as there is only half a movie here, with the second act rolling through the motions of where this film needs to go, despite having some fun gags along the way.  We understand who these characters are and get that they need to mix things up if they want to survive in the magician world, but once Burt Wonderstone is on his own, all that he is left to do is team up with the character who put up with a lot of his nonsense, only to have her push it aside, because the movie has Burt’s name in the title.  If this was a reality show, Wonderstone would be voted off the magic island, but as it stands, he remains and while there are still jokes, there is uneasiness about the movie balancing a mean streak against its sly or darker comedic elements. 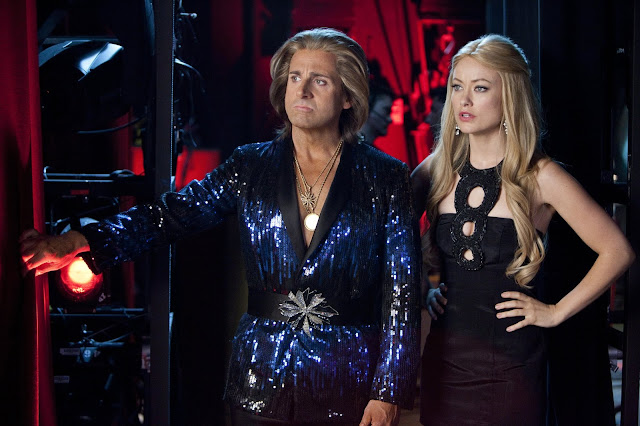 The more frustrating thing is that despite there not being much movie here to work with, Burt Wonderstone becomes more engaging to watch in the meandering second half.  Once Carell turns his jerk switch off, he brings out the more human side to himself, which tends to be effortlessly watchable, because that is what Carell is good at (aside from Brick in Anchorman).  In saying that, I could make the obvious statement that this is really a Will Ferrell-type role, but I don’t think he could play the character any better, I just feel that the script is lacking by not having set us up with Burt’s character well enough to begin with.

Putting all of this aside, I will point out again that I did laugh during this film.  I laughed enough to give it a mild recommendation, because that’s the overall goal here.  The Incredible Burt Wonderstone is not a laugh riot, like The Prestige (*holds for laughs and moves on to next point*), but I was still entertained by a premise that does not reach its full potential, despite having some fun ideas.  Jim Carrey is a big reason behind that, so I can only hope this brings on more good roles, supporting or otherwise, for him in the near future.  And honestly, Alan Arkin’s pencil-thin moustache was the real thing that worked its magic in this movie. Aaron is a writer/reviewer for WhySoBlu.com.  Follow him on Twitter @AaronsPS3.
He also co-hosts a podcast, Out Now with Aaron and Abe, available via iTunes or at HHWLOD.com.
By Aaron Neuwirth
2013 Films Comedy Don Scardino James Gandolfini Jim Carrey Olivia Wilde Steve Buscemi Steve Carell
Reactions: