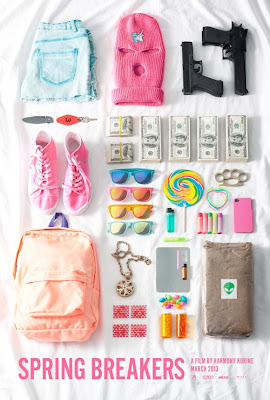 Spring Breakers has a very easy hook, by providing us with the image of young college girls in bikinis, wearing ski masks.  The high concept phrasing is just as simple: a group of college girls rob a store in order to fund their spring break.  The cast consists of young girls, best known for their family friendly image, which is done very intentionally, as I find it key to note that the film is sly and satirical in what it’s depicting.  The film is also very aggressive in terms of its filmmaking style, but in a way that makes for a hypnotic viewing experience, regardless of how much I enjoyed the film.  Spring Breakers presents a barrage of boobs, butts, sex, drugs, and criminal activities, but beneath its colorful and explicit surface, I found a film with a thesis that I would consider fascinating. 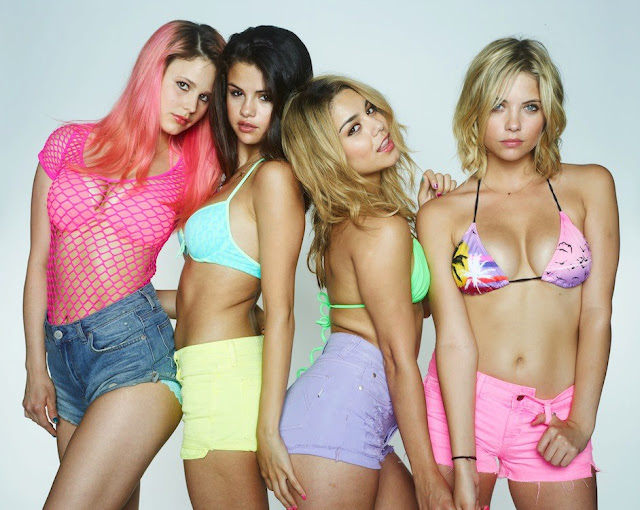 The film begins by introducing us to what the most explicit vision of spring break in Florida is, or at least what it is that our main characters our after.  It is a series of attractive, college-aged coeds, sometimes in swim suits and bikinis, sometimes less; partying on the beach, while drinking, dancing, and engaging in sexual shenanigans.  The majority of this is shown in slow motion and it is all set to the tune of “Scary Monsters and Nice Sprites” by electronic musician Skrillex, who assisted in scoring the film (quite effectively), along with Cliff Martinez.  It is an effective scene, but not because of ‘how crazy it is’ or because it presents a ‘parent’s worst nightmare’, but because it lays out what we are supposed to consider to be the ultimate goal for our characters and what we hope they become involved in.  As this introduction to the film carries on, we begin to see flashes of what the rest of the film is going to have to offer and also become clued into how this film will present itself, by calling back and ahead to other scenes, making for a collage like atmosphere and letting us observe all that is going on, stacked on top of itself at times.

We follow Candy, Brit, Cotty, and Faith (Vanessa Hudgens, Ashley Benson, Rachel Korine, and Selena Gomez), who are all college girls with a desperate need to get out of the area they are in and visit what they consider to be paradise.  None of these characters are all that different from each other, with the exception of Faith, who is in fact a very religious girl, despite participating in a vacation that will be filled with drugs and alcohol.  These girls have not been able to save up the amount of money they would need to have the ultimate spring break, so three of them (guess which one is not involved) decide to rob a store and use the money to get to Florida.  The girls are successful in this endeavor and make their way to paradise. 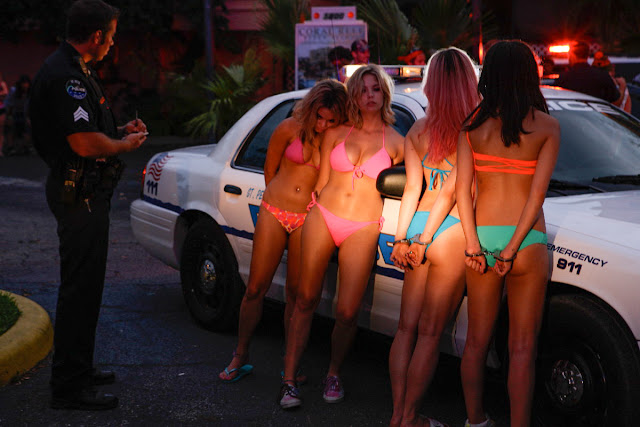 The robbery sequence is flashy but very well done, as the first time we see it is from the perspective of the getaway driver.  Two girls are inside robbing the store and its patrons, while we sit with the third girl, in an entirely unbroken shot, and watch the activity in motion, from the outside.  It also brings forward the notion that not everything is what it seems, as these girls pull off the robbery very easily, a construct that will be seen throughout the film.  Spring Breakers is very stylized in terms of its depiction of reality, which is quite fitting, given what this film is trying to show us and how it attempts to reach that goal by introducing these girls to more and more ridiculous situations.

One of these ridiculous situations is embodied by the character of Alien, played by James Franco.  Alien is a street hustler/rapper with an aggressive, but charming attitude that could be linked to someone like, I don’t know, Patrick Swayze’s Bodhi in Point Break.  This is a man with dreadlocks and silver teeth, who is able to put three of the girls under his spell.  They all meet, because the girls wind up getting arrested for their behavior, but can’t afford to pay a fine without calling their parents.  Alien spots them and pays their fees, with the silent understanding that the girls stay by his side.  Faith is not pleased and obviously uncomfortable, but the others are happy to stick with Alien and are lured even further down the dark path, as they begin to embark on criminal activities with him. 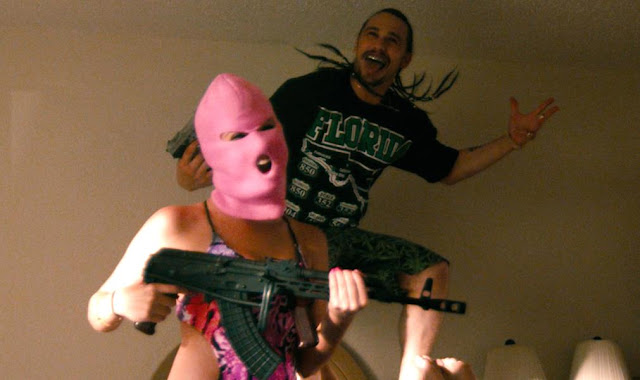 I am not sure how he does it, but Franco is kind of amazing in this role.  Having just seen him be slightly underwhelming in Oz the previous week, the fact that he is playing another charming conman character and pulling it off much more effectively is impressive.  Franco sinks into this role, establishing an outward personality, while also pulling off another performance that lurks behind that guise and suggests what Alien is really all about.  It is a performance that is very watchable, even as Alien makes things uncomfortable for those around him, and pulls off a tricky balance of how annoying he may seem.

Annoying is a key term that can be taken into consideration for this film as a whole, as it approaches this on many occasions, given how flashy everything is, how lurid the content can be, and how vapid some of the characters are.  However, that is what I found to be very intriguing about the film – taking into consideration how much of this was deliberate.  It is difficult to knock the depiction of these girls and how strong there performances are, because I think writer/director Harmony Korine was very much going for this.  Does that make the film critic-proof or anything like that? Of course not and I can see this film dividing audiences, as it can be recognized for its poignant moments and ‘on purpose’ bad acting, as much as it can be for its meandering nature and shallowness. 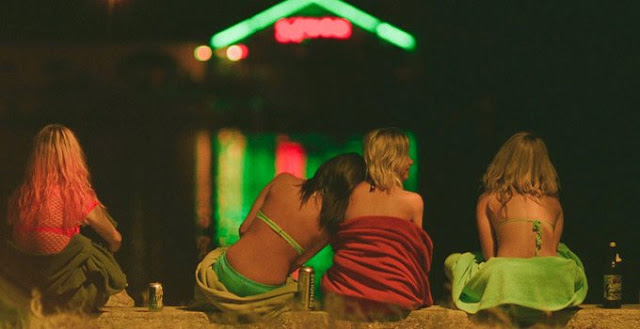 From a filmmaking standpoint, Spring Breakers resembles some kind of twisted MTV summer rom com by way of Tony Scott.  I have already described the visual aesthetic as hypnotic and it comes to no surprise for me that the cinematography was handled by Benoit Debie, who previously collaborated with Gaspar Noe on similarly visually dazzling films (regardless of the content) Irreversible and Enter the Void.  With this film, Korine relies on a lot of reoccurring motifs, replayed dialogue, clashing colors, slow motion and other techniques to truly let the film explore this idealized version of what a crazy spring break is, while also letting it segue into darker territory.

Some can scoff at the idea of attaching meaning to all of this debauchery, but I did find a few things to be gleaned from this film.  A key aspect revolving around expectations and finding purpose in life matched up against reality and the consequences of ones actions.  This is buried within a film that is quite funny and features four attractive girls riding rented scooters through an alcohol soaked ‘paradise’, but the film has some key moments that really emphasize these aspects, making it all the more intriguing to me. 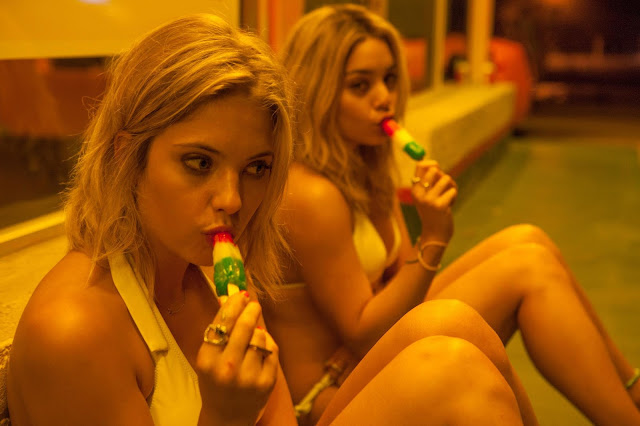 Getting back to where I started, Spring Breakers has a weird energy to it that I fell under the spell of.  I think it is slightly flawed in the way that not much more comes from what is set up, but I still think the film scores overall by creating a spellbinding atmosphere that relishes in the idea of making audience members want to continue forward, but also recoil, given the actions of some of the characters.  This and the magnetic performance by Franco kept me enthralled in a film with more going on than its outward, shallow appearance.  It is a sex-crazed film for sure, but where lesser films could come off as lazy, Spring Breakers attempts to be something with more depth.
Alien:  We’re in a magic place y’all! 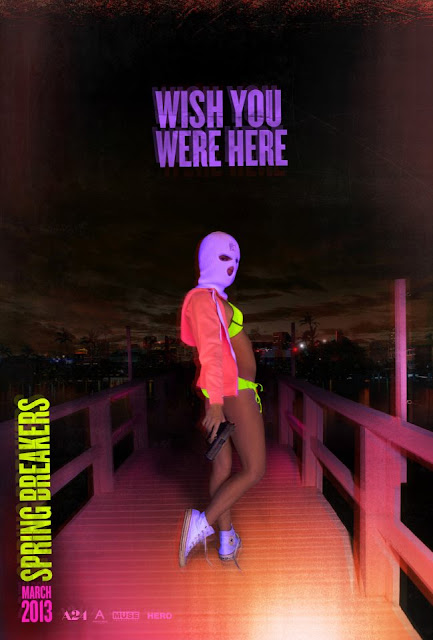 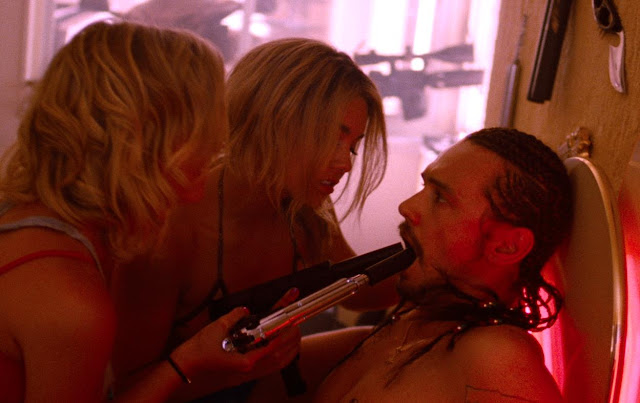 Aaron is a writer/reviewer for WhySoBlu.com.  Follow him on Twitter @AaronsPS3. He also co-hosts a podcast, Out Now with Aaron and Abe, available via iTunes or at HHWLOD.com.