Enter ‘Trance’ And Find The Reality In This Hypnotic Thriller 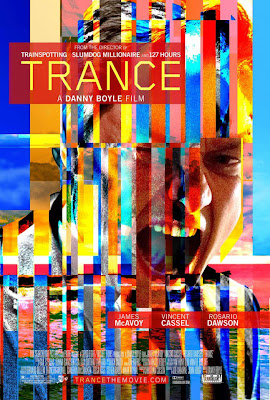 Elizabeth:  Have you ever been hypnotized before?
Simon:  Uh no…at least not that I can remember.

I love how in the dark I was about this movie.  The reason I jumped at the chance to see Trance is because I love Danny Boyle’s work, as he always tackles a new genre and injects his kinetic style into it.  This generally makes for a film that is quite unique, regardless of its quality.  Trance also features stars James McAvoy, Vincent Cassel, and Rosario Dawson, providing me with another reason to have wanted to check this film out.  Knowing nothing about the plot of this film going in, I was quite pleased with the results.  Much like how Stephen Soderbergh recently dabbled into the realm of neo-noir with his latest film Side Effects, Boyle has also made a film with noir-ish elements, while also exploring the idea of false realities created by hypnosis.  It is an interesting story, with plenty of energy to keep everything moving, and the added joy of providing the film with the structure of a sexy thriller. 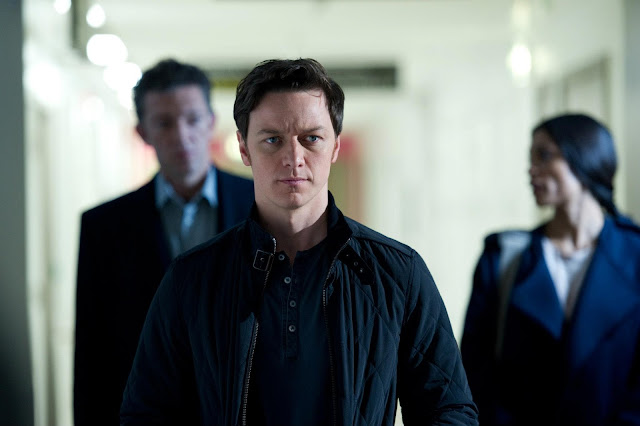 James McAvoy stars in the film as Simon, a fine art auctioneer who is a key player in a plan to steal a valuable painting during an auction.  The plan is pulled off almost perfectly, except for one thing – Simon called an audible and hid the painting elsewhere, away from the other criminals.  During the heist, Simon also takes a big hit to the head, hospitalizing him, and causing him to lose his memory in regards to where he hid the painting.  The leader of the criminals pulling the heist, Franck (Vincent Casel), is not at all amused by this and resorts to using a hypnotherapist (Elizabeth, played by Rosario Dawson) to help Simon recover his lost knowledge.  The stakes are raised, when Elizabeth’s relationship to the group becomes more complicated.  It does not help that Simon’s interpretation of reality has greater consequences, as the process of hypnosis borders on doing just as much damage as it does good.

The film actually has a lot in common with what Christopher Nolan has done in his films Memento and Inception.  While the way Trance plays with reality vs. the notion of hypnosis is not as elaborate as getting lost in multi-layered dreams, it does present the idea of how the mind can be tricked.  Similarly, while the film does not play backwards, it does have some shiftiness involved in its linearity and has fun with altering the viewer’s perception of the three main characters involved in this story.  Trance actually does a fine job of sharing the same realm with not just those two Nolan films, but Danny Boyle’s first film, Shallow Grave.  That film similarly featured three main characters, a story fitting of something that Hitchcock could have considered making, and the dynamic style that Boyle adds to all his features. 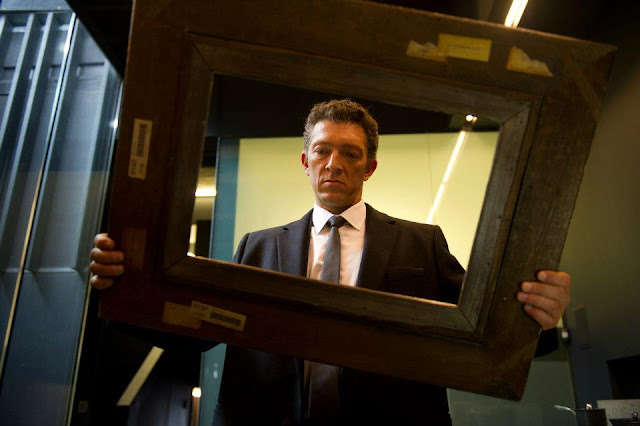 What makes Trance distinct is the way it goes about telling its story and allowing us to occupy the mind of Simon for the majority of the film.  It kicks off without warning, given that we are thrust into a heist that is minutes away from occurring and does not take a lot of down time, before reaching the credits.  True to form, when characters in this Danny Boyle film suffer pain in some way, the work by Anthony Dod Mantle as cinematographer and the use of sound design really heighten this to have the viewer suffer or at least strongly acknowledge what is being endured.  And the soundtrack is perfectly suited for a thriller revolving around hypnosis.  Rick Smith, member of the electronic group Underworld, provides an electronic score that is wholly appropriate for capturing the right tone in a frenzied telling of a noir-ish story.

The screenplay was written by Joe Ahearne and frequent Boyle collaborator John Hodge.  While the story’s third act, which focuses on a series of (sometimes contrived) reveals, loses a bit of focus and is not quite as clever as the rest of the film (at least to me, since I felt pretty clued in to what was going on), I really enjoyed the setup and what was done to have me appreciate the efforts of all three main players.  Trance does not try to give us an easy out by making one character a saint in any way.  Simon, Elizabeth, and Franck all have flaws that become more apparent for some, while others become more sympathetic as the film carries on.  I was also a fan of how the film is assembled when it deals with the hypnotherapy-based scenes.  Regardless of the real life research done or whatever, I liked the way we learned more about all three characters based on this central premise. 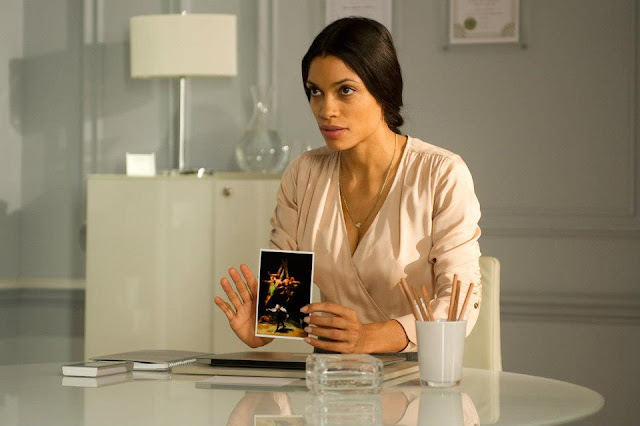 As Simon, James McAvoy seems like an obvious choice to fill-in for a younger version of Ewan McGreggor, whom Boyle worked with on his first three films.  With that said, I have nothing against McAvoy and found him quite good here, as he is not just an innocent that is caught up in heightened circumstances, but a more complicated individual that one would not necessarily suspect as a great danger.  My giant crush on Rosario Dawson aside, I found her to play well with the boys in this film.  I like that the choice was to make this character American, for a film set in London, as it added to some of the mystery of this film and set up a greater dichotomy between the characters.  Similarly, having the French actor Vincent Cassel as Franck was a nice choice, as it gave the character a quality that emphasized him as a hardened professional who can also be charming.  Of course, Cassel’s character is constantly portrayed in an antagonistic light, but I like how Trance tries to mix that up as it goes along.

Even Boyle films that I am not as big a fan of, such as The Beach or A Life Less Ordinary (which is a bit of a guilty pleasure for me), are films I find to be quite interesting.  The fact that his filmography does include Trainspotting, Sunshine, 28 Days Later, and 127 Hours, among others, is what keeps me invested in whatever he may be up to next.  Boyle has a collection of films that are all different from one another in terms of genre, but connected by their stylistic qualities and some thematic similarities.  Trance is another success for Boyle, as it provides an intriguing story that is matched by how we get to view it and the players involved.  It is a solid play on a twisty thriller, with the idea of hypnotism thrown in as a successful way to amplify these stakes further.

Simon:  Was I hypnotized? 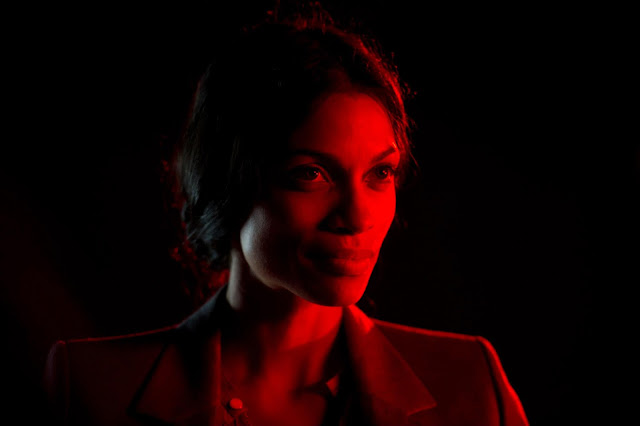 Aaron is a writer/reviewer for WhySoBlu.com.  Follow him on Twitter @AaronsPS3.
He also co-hosts a podcast, Out Now with Aaron and Abe, available via iTunes or at HHWLOD.com.
By Aaron Neuwirth
2013 Films Danny Boyle James McAvoy John Hodge Neo-Noir Rosario Dawson Thriller Vincent Cassel
Reactions: