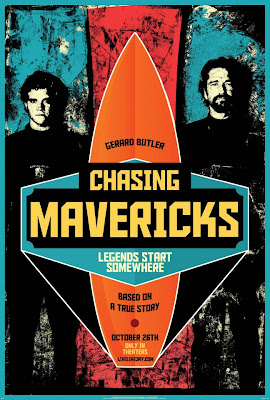 Chasing Mavericks:  2 out of 5


Frosty:  That wave is a myth and the four of us who surf it intend to keep it that way.

Chasing Mavericks is the kind of film that clearly has its heart in the right place.  I would not say that the story crashes like a wave onto the beach, because of its devotion to making its lead character a saint that can do no wrong, but it does suffer because it is so willing to not so much have real characters as it has easily defined types and several, by-the-numbers, dramatic subplots.  On the plus side, Chasing Mavericks does make the case for their needing to be a true IMAX documentary about surfing, because this film does feature some pretty wonderful cinematography, when dealing with the mythical waves that our hero hopes to surf one day.  It is a familiar sort of film, but being too familiar does not ruin it completely. 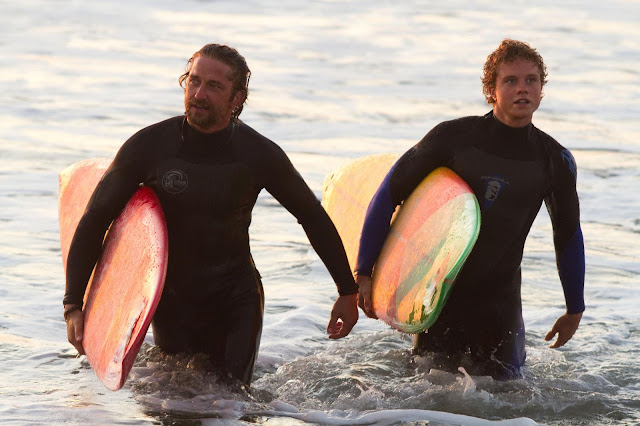 The film chronicles the journey of Jay Moriarity (Jonny Weston), who wants to reach his goal of surfing America’s most dangerous wave, which is thought to be a myth.  These waves are known as ‘Mavericks’ and Jay has only discovered them after sneaking onto his neighbor’s van and finding out about it.  Jay’s neighbor is Frosty Hesson (Gerard Butler), a man who has devoted much of his life to surfing and is among the few who know how to ride these giants.  Because Jay will probably kill himself trying anyway, Frosty begrudgingly decides to train Jay for survival, if he really feels that he can be a match for a Maverick.  Along with Frosty and Jay forming a unique bond, we also watch as Jay deals with other issues in his life and apply the Obi Wan-like knowledge that Frosty imparts to him.

Chasing Mavericks is based on the true story of Jay Moriarity; with a screenplay that I am sure takes a lot more dramatic license than it really needs, as it feels like an extended Lifetime movie at times, with the difference being that it incorporates some pretty epic surfing/wave-related cinematography.  The film was directed by Curtis Hanson, who unfortunately had some health issues that stopped him from completing work on the film, which lead to Michael Apted finishing it off.  I am not sure if either of these two men, both hovering around 70 years of age, are really into surfing, but I can see how some of the themes of the film play into the types of films they have made before.  It is just unfortunate that I could not latch onto these characters more. 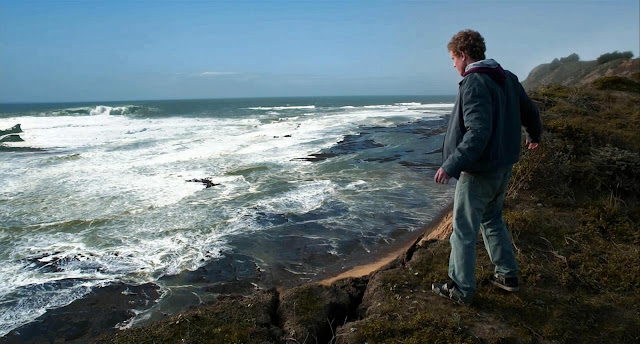 Gerard Butler was a key reason I wanted to see this movie, as I think he’s a pretty charismatic screen presence, especially when he seems to be trying, rather than just walking around being just as charming as the paycheck requires him for various romantic comedies.  In this film, Butler is a hardcore surfer, a family man, and a mentor all rolled into one, but something seemed off about him, up until a very specific point later in the film.   Maybe it was his strange American accent, which did not quite remove the Scottish inflections of his true accent or maybe it’s because his character is constantly dictating the themes of the film.  Regardless, while he does eventually get deeper into his character, it doesn’t quite match Butler’s best.

With all of that said about Butler, he is coming off a lot better than Jonny Weston as Jay.  I do not want to sound too harsh here, but as his big theatrical film debut, it seemed evident that Weston was kind of a rookie when it comes to delivering on a lot of what is required of him.  Sure he looks good in action, when we see the surfing and training montages, but his general demeanor in the film was not selling the variety of emotions that we are supposedly supposed to see that he is going through.  Weston smiles throughout this film in a way that eventually becomes way too distracting.  Whether or not this is something the real Jay was known for, the fact that we’re dealing with a kid whose father left and mother is sort of a mess, but neither of those things, let alone the impact that surfing has on his life, really registered in a clearer sense brought on by the actor, instead of the score, which hits you on the head with intention. 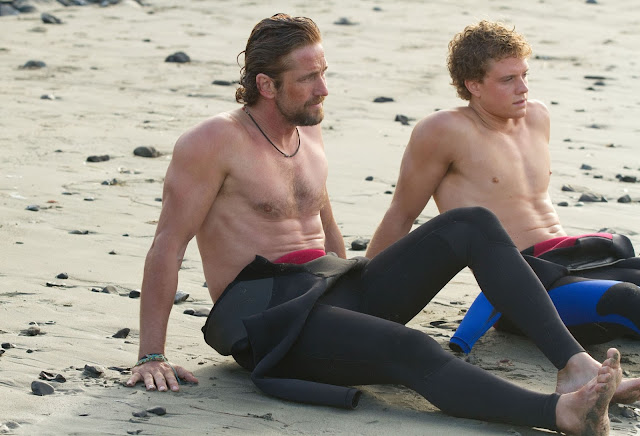 This leads to my other main issue, which is that the film has a big problem with subtlety, as in it lacks it in almost every area.  The characters in this film are all very specific types, meaning that we get very obvious scenes where the ‘good’ characters say helpful and nice things, while the ‘bad’ character act like huge jerks for no apparent reason, other than to provide some sort of conflict.  These things are handled rather haphazardly and distract from the main arc of the film.  As Chasing Mavericks lasts nearly two hours, a number of subplots could be dropped and this would perhaps be a pretty solid film about a guy training to conquer something successfully that plays pretty quickly, while looking good and showing off the positive aspects of working hard to achieve something.

Speaking of positive aspects and the film’s lack of subtlety, I get that the film is trying to provide a great image for a guy that people loved, but Chasing Mavericks basically makes Jay into a saint.  In the film, Jay is great at everything he does – surfing, skateboarding, biking, and exercising.  He also has a job, helps his mother get up for work every morning, doesn’t do drugs, does his homework and chores, is incredibly polite to everyone he talks to, and works hard to save up his money.  I guess I can see why “Live Like Jay” is a strong motto that people have embraced, but the fact that the movie presents an individual whose only flaw is that he needs to reach deep inside to write a better essay about why surfing a Maverick matters is not a lot to make him all that interesting. 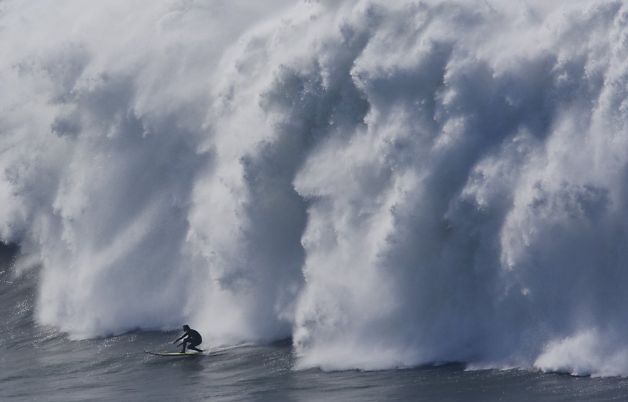 The most redeeming quality of Chasing Mavericks is the fantastic cinematography by Bill Pope.  I don’t know how he was able to capture some of the wave footage seen here and I am not sure what to think is a visual effect of Butler or Weston surfing and what isn’t, but the fact that I was always convinced in what I was seeing and found some of these scenes to be quite breathtaking is impressive.  As I said at the beginning, a full-on IMAX presentation of surfing footage would indeed be righteous, but for now, if you’re tiring of Endless Summer and Riding Giants, at least Chasing Mavericks has some pretty solid footage captured here. (But seriously, someone get on making that IMAX surfing documentary, I want to see that.)

Chasing Mavericks pretty much measured up to what I was expecting, even though I had interest in seeing it.  I do wish it was better, despite having an appreciation for the film’s solid ocean footage and respect for the real life figure they are representing.  If only the narrative did not fall so flat in presenting a dramatic storyline on top of the already engaging main surf training arc.  The movie does find some decent moments scattered throughout, but you’ll have to paddle through some muddied waters to find it.


Frosty:  This is about more than just surfing.  It’s about finding that one thing in life that set you free. 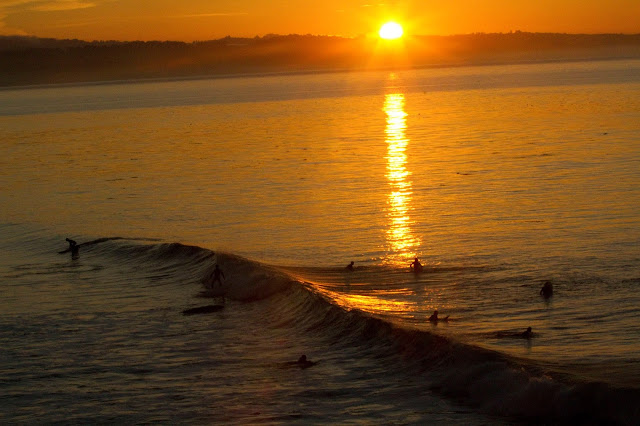 Aaron is a writer/reviewer for WhySoBlu.com.  Follow him on Twitter @AaronsPS3.
He also co-hosts a podcast, Out Now with Aaron and Abe, available via iTunes or at HHWLOD.com.
By Aaron Neuwirth
2012 Films Abigail Spencer Based On a True Story Curtis Hanson Drama Elizabeth Shue Gerard Butler Jonny Weston Leven Rambin Michael Apted Surf
Reactions: