‘Robot & Frank’: A Buddy Movie From The Near Future 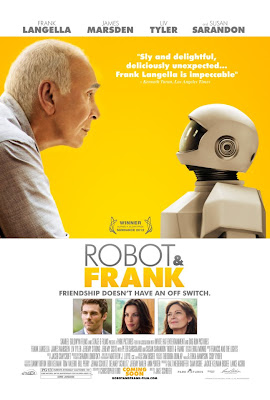 Robot: Hello, Frank. It is a pleasure to meet you.
Frank: How do you know?

Sometimes it all just boils down to something as simple as a man and his robot.  Robot & Frank is a very low key story that takes a simple sci-fi premise and manages to pull off something pretty affecting.  It features a wonderful lead performance from Frank Langella, who is tasked with playing an elderly man who befriends a robot, which leads into a film that ends up being a drama, a buddy comedy, and a heist film all in one.  The result is a charming feature that is both sly and heartfelt.  There may not be much more to this film that adds further dimension to this world or social commentary in any way, beyond the basic themes and concepts, but is still an enjoyable and well-made film, nonetheless.

Frank Langella stars as Frank, an aging ex-convict, who currently lives at home in a near future setting.  Frank is beginning to suffer from dementia, which causes some lapses in memory at times, but does not stop him from taking walks to the library, flirting with the librarian (Susan Sarandon), and reading real books, as opposed to submitting to technology.  Frank also has two children.  One is Madison (Liv Tyler), who is constantly away doing philanthropic work, but is happy to video call her father once in a while.  The other is Hunter (James Marsden), who has a family of his own and has had issues with his father before, but takes a lot of time to visit and check up on Frank.
Eventually, Hunter becomes too tired of these visits and worrying, which leads him to purchasing a robot companion (voiced by Peter Sarsgaard) to help care for Frank, as opposed to having him sent to an elderly care facility.  With the robot making Frank submit to a daily routine to help him keep his mind focused, Frank is at first put off by its presence and wishes to reject its services.  However, Frank eventually warms up to his mechanical companion, especially as he realizes the robot could help Frank in some criminal activities that he is still partial to planning out and participating in.  As the story carries on, we see to what lengths this unlikely friendship will go, as Frank continues to delve into old habits, despite his own health issues.

The film was developed by director Jake Schreier and writer Christopher Ford.  The two wanted to make a film about the way technology has been rapidly developing and having an impact on everyday people.  They ended up with this quaint, little film about an elderly man making a friend.  Of course, there is also the added factor of that friend being a robot capable of doing a variety of different functions, which is interesting, but the film really gets more mileage out of having its heart in the relationship, as opposed to the nature of the technological aspect that is involved.
The depiction of technology may cause issue for some who are expecting more.  I was a little surprised at how simplified the film’s story was, given that we are in a futuristic setting, to an extent, but did not really delve into any of the morality involving the choices being made when accepting technology into our lives.  At the same time, this is kind of refreshing.  As opposed to a darker future society or one that has secret resistance groups looking to stop the machines from taking over, this film does not depict the arrival of more advanced technology as a good or bad thing.  Instead, characters simply treat things as they are, which allows us to focus more on the characters of interest and our understanding of them.

In getting to these characters, this film is clearly the ‘Frank Langella show’ through and through.  Langella is playing an older man who has done some questionable things in the past, but wanted to stop in order to be with his family, although things just did not quite work out that way.  As a result, he is alone, trying to stay active, but ultimately distraught, despite having that emotion come out in different sorts of ways.  He has an initial resistance to the robot, which only leads to him accepting it, over time, as a certain version of a child/buddy he could never have.  It is a great development that goes through a number of stages that are appropriately humorous and affecting.
The soft vocal performance by Sarsgaard (who I was sure was Kevin Spacey re-doing his performance from Moon, until I got to the credits) is very helpful as well, as it does enough to make us care about this robot, despite how we are constantly reminded that the robot is not ‘alive’.  Between the two of them, the performances resonate quite well.  The supporting cast is fine as well, though Sarandon, Marsden, and Tyler really only amplify what Langella is given to do.

I was genuinely surprised with how taken I was with this film.  It has a warmth to it, which makes it immensely likable.  It is a low budget feature, but does a lot with what it has, given that the co-lead is a robot.  Langella is very good here, playing up the “grumpy old man” persona, but not in a way that feels trite.  The rest of the film also manages to not feel trite, which is great, because, despite the simplicity of the film overall, I was into the core relationship enough, where I felt moved by the time it had finished.  Robot & Frank is a good little movie, as clever as it needs to be, and certainly satisfying on the whole.

Robot:  I’m glad to see you so enthusiastic.
Frank:  I haven’t felt this good in years.  C’mon, let’s arm wrestle.