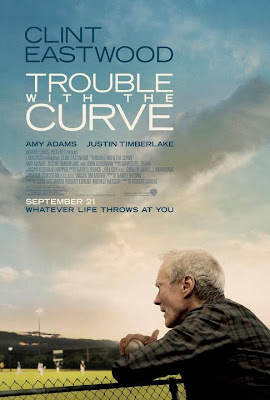 Gus:  Get out of here, before I have a heart attack trying to kill you.

So Clint Eastwood has returned to the big screen for a movie that does not require a whole lot of effort from him.  Trouble with the Curve is a fairly slight film about a number of old American chestnuts, such as baseball, getting older, trusting your instincts, and the father-daughter relationship.  It is not necessarily bad, it is just nothing that is all that special, as everything about the film is predictable, lacking in subtlety, and tied up in a nice little package at the end.  The reason to show up is for Clint of course, but how much you appreciate him depends on how much you want to put up with his grumpy old man shtick.  The likability of Amy Adams and Justin Timberlake add a bit to the film, but overall, it is a fairly slow walk through the ballpark. 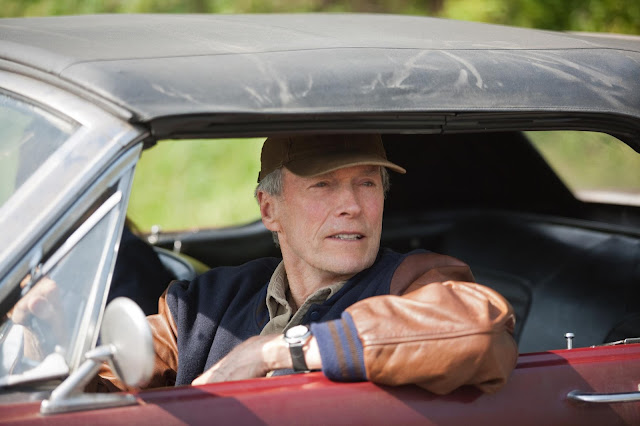 Eastwood stars as Gus Lobel, an aging baseball scout for the Atlanta Braves.  Gus is having issues lately, as his advancing age is making the organization skeptical over how well they believe Gus is at doing his job.  One of the higher ups and a friend to Gus, Pete (John Goodman), is hoping that Gus can at least finish out the time left on his contract, so he convinces Gus’s daughter Mickey (Amy Adams), to join Gus on the next scouting trip in North Carolina.  For Mickey, times are constantly hectic for her.  She can barely hold onto a relationship, because she is so busy with work at a law firm, where she is hoping to become a partner.  A trip, where she has to help out her father is not one that she is really looking forward to, given the nonexistent relationship they have.  Neither Gus nor Mickey is looking forward to the idea, but things move forward anyway.
While in North Carolina, watching a key player for a minor league team, which a lot of scouts have a lot of interest in, Gus and Mickey attempt to make the best of it, or at least the best they can make of it.  During this time, a rival scout, who used to be a player Gus scouted, Johnny (Justin Timberlake), arrives and sort of pals along with Gus and Mickey.  From there, we see all of these characters work towards various goals, including doing a good scouting job, watching if Mickey can juggle her job with her dad’s business, see how close Johnny gets to Mickey, and find out if Gus can make up for his past parenting abilities with Mickey.  Play ball. 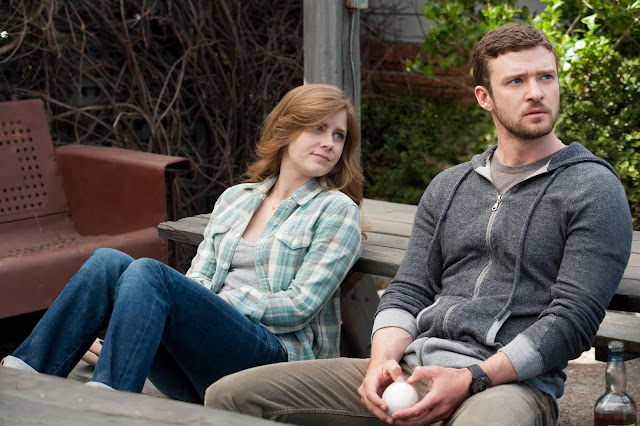 It is somewhat notable that this is Clint’s first time acting since 2008’s Gran Torino, let alone his first time acting in a movie he did not direct himself in almost two decades.  With that said, while I don’t love Gran Torino as much as I know others do, if that were to have been Eastwood’s final role as an actor, I would have preferred it to this.  A big issue I have with Trouble with the Curve is that it feels like Eastwood is just going through the motions of this kind of role, rather than brining something to it.  I would not necessarily say he’s playing a parody of himself, because Eastwood remains an enjoyable presence for the most part, but it just did little beyond make a tired story slightly more interesting.  Prior to this film I had just seen Frank Langella in Robot & Frank, which similarly has an elderly actor playing this sort of role, but Langella was easily more engaging and enjoyable to watch, as it seemed like he invested a lot in that sort of role.  The material may seem easy, but it is possible to play beyond just providing what to expect from an ‘old man performance’ and actually dig into it.
Coming off better in the film are Adams and Timberlake.  Adams does not have to do a whole lot to make herself likable (it was more impressive to see her do the opposite in The Master), but she fares well here as a character who could be warmer, were she given the chance to have some fun.  That fun comes in the form of Timberlake, who is really the best thing about this movie.  The guy is so charismatic and regardless of how obvious the storyline revolving around him and Adams is, they have a charming level of chemistry that serves the film well.  And not that he factors into too much of the film, but I always enjoy seeing John Goodman around in general. 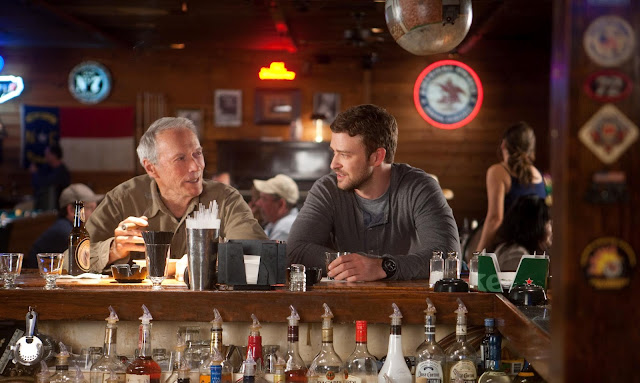 The film was directed by Robert Lorenz, who has previously served as Eastwood’s producer and assistant director on around 20 of his films.  This explains why Eastwood decided to come out of his supposed retirement from acting, as the film is basically tailored to him, despite my reservations about his performance.  Trouble with the Curve certainly does have the feel of an Eastwood-directed film as well, given the sort of style the film has, i.e. the pacing, the look of some key flashbacks, etc.  For a first time director, the film has been made well enough, but some awkward choices were made and first time screenwriter Randy Brown may have contributed to more of the issues that I have with the film in general.
The story is not necessarily bad, but it does have some weird flaws that give the impression that this film is purposefully trying to be very old fashioned.  The film has a whole lot of tells that indicate exactly where the film is going, which is best exemplified by the very black and white supporting characters.  The characters in this film who are supposed to be good are basically saints.  The ‘villains’ of the film are clearly evil.  There is a huge lack of subtlety in getting the audience to root for how certain events should play out, which led me to think that the approach to this film was very dated overall.  It also felt fairly humorous to me that the film is against the idea of digital and all for the old way of doing things, which is best exemplified by Eastwood’s hatred of computers. 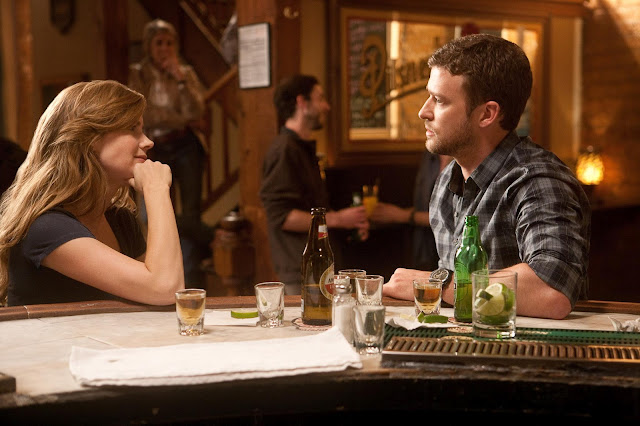 Other noticeable qualities about the film include the use of humor, which puts the ratio of one humorous moment to three ‘Eastwood is an old man’ jokes.  The film is a light drama overall, so I am not getting on the film about having a sense of humor, but I am just curious how far audiences are willing to roll with grumpy old Clint.  On the other side of this, we have the dramatic father-daughter story being told, which is basically fine, but we are just hitting many of the same beats over and over, until the pivotal conversation that changes everything happens.  And then there is the ending, which manages to wrap up every plot point within about an hour.
I am sure that this is the kind of feel good drama that will be enjoyable enough for the same crowd that appreciated Hope Springs, which is fine, it’s not a movie that needs to change the world.  As it stands, it is not so much a baseball movie, as it is a movie about people that really enjoy the sport.  It is much more a character drama centered around two people who have issues connecting, with a charismatic Timberlake along for the ride.  I just wish I was more into Eastwood’s performance.  It is not that he is bad, I just think he’s playing this same grumpy guy that people are expected to like.  Along with the perfunctory story, that features plenty of arguing and an inevitable ending, there just isn’t a whole lot to make this film standout.  It’s not a strike out, but it didn’t exactly pull off a strong hit to get to its base either.

Gus:  I just didn’t want you to have life in the cheap seats.
Mickey:  What are the cheap seats?  Spending every waking moment with my dad, watching baseball?