Pixar’s Princess Learns How To Be ‘Brave’ 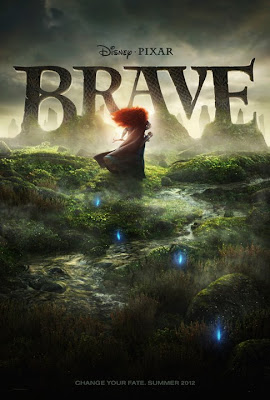 Princess Merida: If you had a chance to change your fate, would you?

It is interesting how this year’s feature from Pixar is both somewhat of a departure, yet also a familiar story that they are attempting to tell.  Brave, first and foremost, is an enjoyable film, which manages to provide a story that is humorous, exciting, and fitted with some emotional stakes that seem true to Pixar form.  What makes it both different by Pixar standards, yet familiar as well, is the fact that it stands more closely to being a traditional Disney film, featuring a princess character who makes particular choices and is forced to tackle a life-changing adventure, to an extent.  The result is a film that eventually heads down a path with an inevitable conclusion, while also meeting the acceptable requirements of servicing a strong, lead female character, and providing a strong mother-daughter relationship tale.

Brave takes us back to Ye Olde Scotland and the kingdom of DunBroch.  Merida (voiced by Kelly Macdonald) is the headstrong princess, who is betrothed to one of the sons of the three neighboring lords, but would rather make decisions for herself, live her own life, and have fun practicing her skills as an archer.  This is seen as a problem to Merida’s mother, Queen Elinor (Emma Thompson), who wishes her daughter to act as a true queen should, while her father, King Fergus (Billy Connolly) is more content with letting things be, so long as he can have a good time.  Following an angry argument between Merida and her mother over Merida’s choice to defy one of the kingdom’s traditions, Merida takes off to the woods and finds herself in a situation that could lead to changing her fate.  As a result, Merida quickly realizes that she has made a mistake and must learn what true bravery is, as she faces various challenges in order to correct it.
Something Pixar deliberately does every time out is deliver a creative marketing campaign in the lead up to their films.  The basic premise is established, with enough provided to put people into theaters, but I feel it is rare that I really have any idea what the story is actually going to be past the first act.  That stands as very true for Brave, as I found that I knew next to nothing about the true elements of this story, given the major turns that it takes, once it really gets going.  As a result, that factor alone makes it rewarding, as it is nice to be in somewhat unpredictable territory, when walking into a film.  Of course, it also comes down to how I will view the film upon looking back on it and considering how well it holds up, given that I will now already know where it is headed, when it comes to thinking about revisiting the film.

Given Pixar’s ability to take interesting themes and fit them into stories that break away from the norm, Brave actually follows a fairly traditional story structure to an extent, which is fitting of a Disney princess film.  That said, Brave is not a bad film because of this story direction, on the contrary, it manages to take the somewhat familiar story and give it enough life, humor, excitement, and emotional stakes to have us hope that things work out well for the characters involved.  I am afraid I will have to remain fairly vague, but things I do admire about this film are many of the decisions made not to go down certain routes, given that the story has to head in a certain direction.  In that regard, the least revealing thing I can mention is that I find it interesting in what the villain of the film is compared to how other films would handle what Brave presents, let alone the concept of a love interest.
What I also tend to enjoy about Pixar is their ability and deliberate decisions in picking people that are right for the roles, as opposed to choosing the biggest stars available.  Kelly Macdonald is an actress who I enjoy quite a bit, though she is prone to darker material (Boardwalk Empire, No Country for Old Men), but I thought she brought the right kind of spunkiness to the role of Merida.  Emma Thompson is quite strong as well, fitting in the domineering wife and mother role that is required of her.  The rest of the cast, which includes Kevin McKidd, Craig Ferguson, and Robbie Coltrane, is mostly around for comedic support and they deliver, with Billy Connolly constantly delivering enjoyable lines as King Fergus.

True to form, this is another gorgeous looking Pixar film, with special notice going to Merida’s wild, flowing red hair.  Every so often, Pixar manages to come out with a new feature that raises the bar on the quality of their animation.  I would not necessarily call Brave a giant leap forward, but given the period setting and the use of human character animations, which is fairly infrequent for Pixar films, it is a film that looks very good throughout.  Composer Patrick Doyle also does Brave a great service by fitting the film with an appropriate score that is enjoyable and full of native Scottish flavor.
There are a few reasons as to why I would still only rank this as a fairly strong effort from Pixar, as opposed to a top tier one.  As mentioned, the story structure does have the familiar element to it, which is not a terrible thing by any means, but does have the drawback of not quite stacking up with the studio’s previous efforts that really strove for ambition.  I did also find issue with some of the details revolving around what Merida needed to do to accomplish her key goal and other, more spoiler-y elements that I cannot really get into.  It comes down mainly to the film seemingly wanting to be more about the mother/daughter relationship in the film, while not having quite as firm a grasp on the story as a whole.

Brave may feel more conventional by Pixar’s standards, but it is also has Pixar’s standard of being a visual treat that’s fun to watch, with some emotional stakes as well.  I think it easily plays to all audiences, as it is a well-made feature, with many talented people having been involved in its production.  I may not be listing it as one of my favorite Pixar features ever, but then again, I do not go in expecting some sort of instant classic every time from one of the most consistent studios currently producing feature films on a yearly basis.  Brave does just fine at hitting its target.

Princess Merida: I am Merida, and I'll be shooting for my own hand.

Note #1:  As with every Pixar feature, there is an animated short that precedes Brave.  This time it is the Academy Award nominated La Luna, which is delightful and successful in being creative, fun, and quite capable of providing a sense of the relationships between the characters that we only get to see for about 7 minutes and making the brief journey we see them take as a rewarding one.
Note #2:  Obligatory 3D update - I saw the film in 2D. 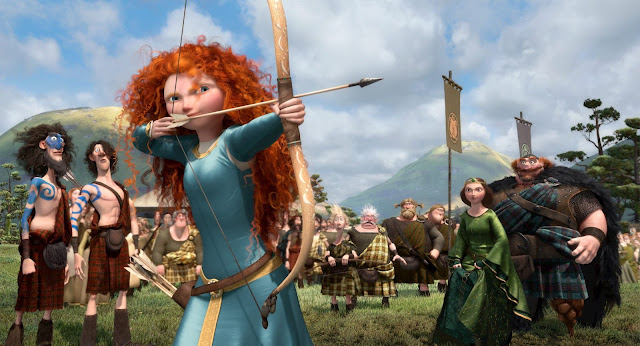