‘Lincoln’ Lincoln, What You Thinkin’, Those Vampires Have Blood They’re Drinkin’ 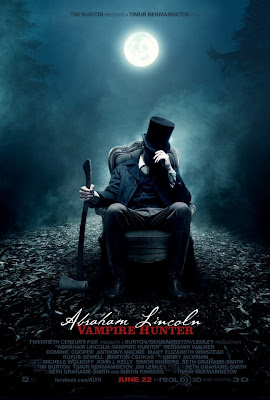 Henry Sturges: There is darkness everywhere! You are not the only one who has lost everything.

There is a certain level of expectancy when seeing a movie like this.  I was first made aware of this bizarre sounding mash-up idea a little over a year ago.  The film is based on a book by Seth Grahame-Smith (who also served as the film’s screenwriter), which became a bestseller.  I read the book based on recommendations and obvious intrigue, due to the fact that it’s called Abraham Lincoln: Vampire Hunter, and I found it to be a really interesting read in the way it told a tale that involved vampires, while clearly being well-researched in the way it tied story elements into historical events.  Unfortunately, the film represents little that was seen in the book, which would not be a bad thing, except for the fact that the movie is not very good on its own.  There is some fun to be had in the campy/stylized way the vampire hunting action is portrayed, but all of the other clunky aspects make it feel like just another generic action movie that happens to be set in a particular time period, with a layer of the supernatural to help distinguish it. 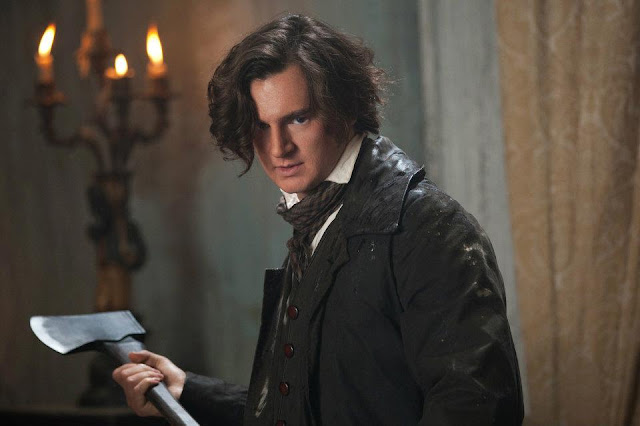 The film revolves around Abraham Lincoln’s secret life as a hunter of the undead.  Starting off with his childhood, we see that Abe’s mother was murdered by a vampire and he grew up vowing revenge.  Once becoming an adult (played by Benjamin Walker – who looks like a mix of young Liam Neeson and Jean-Ralphio from Parks and Rec), Abe attempts to have his vengeance, only to nearly be killed and subsequently saved by Henry Sturges (Dominic Cooper).  Henry has great skill in hunting vampires and becomes Abe’s mentor, training him to be an efficient slayer of these undead creatures.  Equipped with an axe coated with silver, Abe settles in Springfield, Illinois to take down vampires, based on the names that Henry sends him.  During this time, Abe also manages to reunite with his childhood friend and former slave, William Johnson (Anthony Mackie), as well as develop a relationship his future wife, Mary Todd (Mary Elizabeth Winstead).
As time moves on, Abe eventually starts to seek further justice by becoming a politician and an abolitionist, and eventually the President of the United States, of course.  He has also become a thorn in the side of Adam (Rufus Sewell), the head vampire in America, who has some sort of dastardly scheme that involves him enslaving humanity (which requires him and his vampires to fight on the side of the South during the Civil War).  Adam and Abe are clearly on different sides of justice and life, so it will come down to who can either be more honest or ruthless in their fight for what is right.  Spinning-jujitsu-axe-focused action ensues. 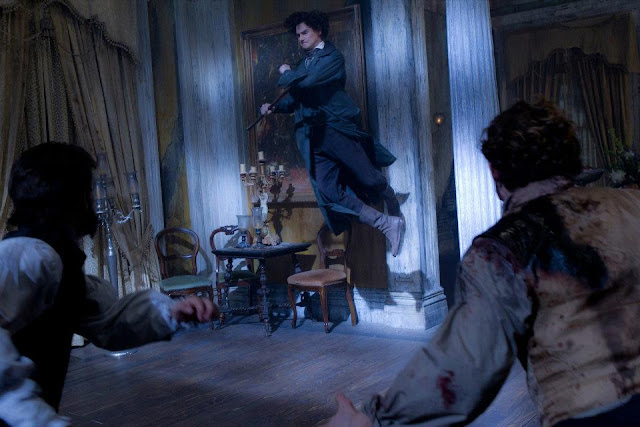 My biggest film disappointment from last year was Cowboys & Aliens, as it looked to be a fun ride.  It fit a similar mold that is seen in ‘Abe Lincoln’, where a very specific setting was given a fantastical twist.  The problem was that no one seemed to be clear on how that should work as a film (seven writers and a slew of producers were involved) and it ended up being a pretty empty experience.  Despite really enjoying the book, I would not say ‘Abe Lincoln’ was as big a disappointment though, because the film never really looked like it was going to be a proper representation of the book.  The film is not so much an empty experience, as it does have its various bits of fun, but it does miss out on being better thanks to poorly written dialogue, a contrived plot, and other factors that strip away the cleverness seen in the book, in favor of what one would assume comes from a film with a silly title like Cowboys & Aliens, Snakes on a Plane, or Abraham Lincoln: Vampire Hunter.
The film was directed by Timur Bekmambetov, who previously directed Wanted and has since become BFFs with Tim Burton, who served as producer for the film.  The result is something akin to what people have seen in Wanted and Bekmambetov’s previous vampire films from Russia (Night Watch and Day Watch), which is to say that it is highly stylized, despite the late-1800s setting.  There is plenty of slo-mo axe twirling, atmospheric settings, and ferocious-looking vampires, all shot in glorious/decent looking 3D.  From a visual standpoint, the film has an over-the-top vibe that definitely feels planned out and never really betrays itself.  The tone is semi-serious in an attempt to keep it fun without being tongue-in-cheek, which is fine.  It is also worth noting that the visual effects/makeup, while somewhat goofy in regards to one or two key action sequences, are pretty solid. 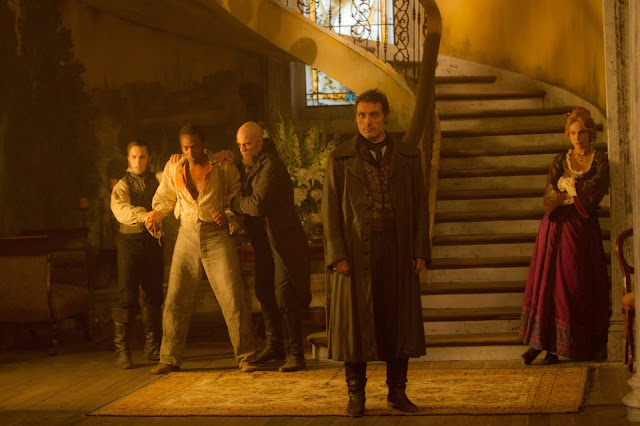 Again, the real issues of this film come down to the scripting and how we are supposed accept certain developments in the story and the way it is being told.  While the book was written as a journal (and is admittedly in a format that is much easier to develop a fully fleshed out story), the film follows a straight-forward narrative that never really does anything that innovative.  It does not help that so much of the dialogue is un-ironically bad when it comes to letting everyone understand the plot.  Then there are issues with world-building.  We get that vampires have various tricks up their sleeves and learn some information about them (every vampire film has different rules), but we are essentially thrown into the stylized aspect and forced to accept certain aspects of the film, with no explanation.  No information is given to why Abe is able to be as skilled as he is (a training montage and balancing on logs didn’t cut it for me) and little is done in justifying his development as a politician.  Some films do not need these types of questions to be answered, but ‘Abe Lincoln’ does not quite find the balance that suggests I don’t need to care.
Beyond Benjamin Walker, who feels suited enough to filling the shoes of Lincoln in a film titled Abraham Lincoln: Vampire Hunter, the rest of the cast has little to do, beyond try to give their bland roles their best shot.  Coming off the best of these supporting parts is probably Dominic Cooper, who at least gets to have fun as the Vampire-Mr. Myagi character.  Rufus Sewell is cast in yet another bland villain role, where he gets to seem intimidating, despite having little else to offer.  Anthony Mackie fades into the background for the most part, besides having some scenes where he gets to show off some of his own vampire hunting skills.  And Winstead fits right into the mold of concerned female character. 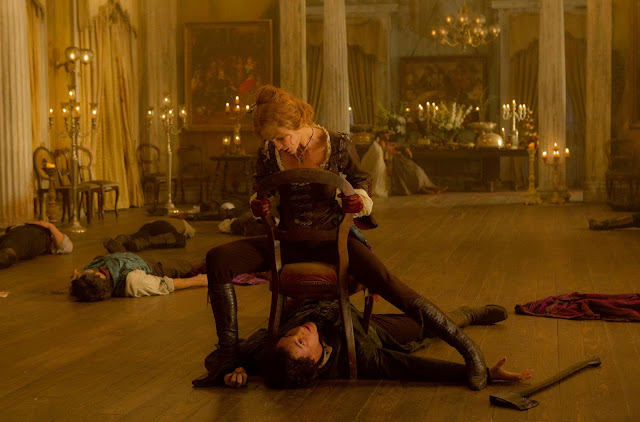 In the past two months Seth Grahame-Smith has served as the screenwriter behind two disappointing vampire films; Dark Shadows and now this.  It is especially sad to think that Smith could not properly adapt his own book to the screen.  Abraham Lincoln: Vampire Hunter has instances where one can set aside its problems and embrace the campy fun that it tries to have with its concept.  I just wish the film was more of an interesting watch and less a bland action flick.  While this year has provided interesting double feature possibilities by releasing both The Raven and ‘Abe Lincoln’, neither of these genre mash-up films has amounted to more than forgettable flashiness.  In the case of Abraham Lincoln: Vampire Hunter, twirling axes, while looking grim was just not enough.

Abraham Lincoln: History prefers legends to men. It prefers nobility to brutality, soaring speeches to wild deeds. History remembers the battle, but forgets the blood. However history remembers me before I was a President, it shall only remember a fraction of the truth... 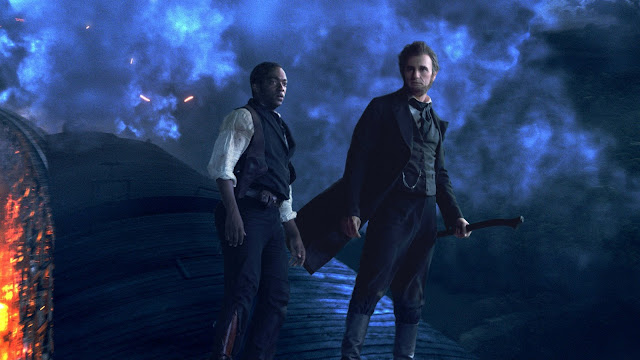