I Found Joy During ‘Seeking A Friend’ 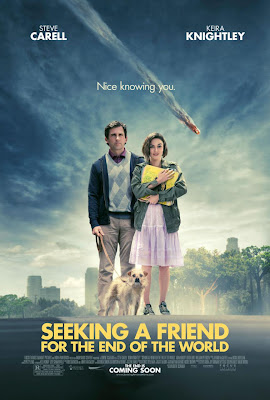 Roache:  The sky is falling.

Sometimes I just really like it when things work out the way I expect them to.  In the lead up to Seeking a Friend for the End of the World, I had a pretty exact image of what my response was going to be upon seeing the film and it ended up being more or less everything that I wanted out of it.  Should that sully my feelings toward it, given that I predicted my own reaction to the film?  I don’t think so.  Should I be disappointed that the film did not surprise me by going in a different direction than what I expected?  I don’t think so either.  I was initially intrigued by the film based on the setup and who was involved and got what I wanted.  ‘Seeking a Friend’ presents a premise that is inherently dark, but adds on some sensibilities of a romantic comedy and a likable cast, which makes it a rewarding film to see. 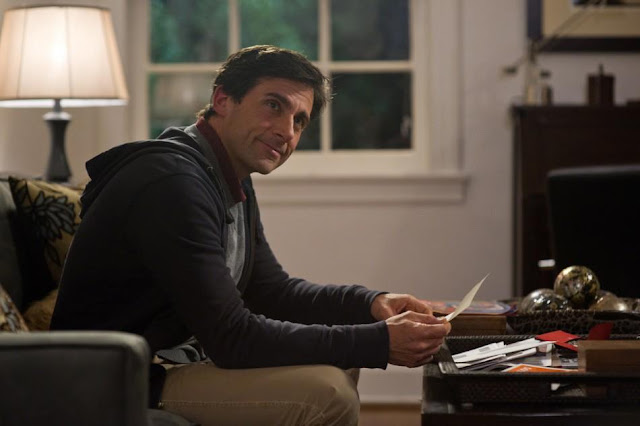 The story:  Dodge (Steve Carell) and the rest of the world are alerted of a terrible, upcoming event.  A 70-mile wide asteroid, known as “Matilda”, is headed on a collision course towards earth.  The team of astronauts (which I only assume was led by Bruce Willis, Robert Duvall, and Tom Hanks) has failed in their mission to stop it and the world has only 3 weeks left, before it reaches its end.  First thing to happen to Dodge:  his wife takes off in a big sprint.  Dodge is a regular guy; insurance salesman; and understandably gloomy.  He meets a woman, Penny (Keira Knightley), who lives in the apartment below him, and the two form a bond as kindred spirits.  Due to ensuing riots, they head off on a road trip of sorts, with intentions of possibly getting Penny to see her family and possibly getting Dodge to find the lost love of his life.  But really, the majority of the film revolves around these two approaching the end and observing each other and the people around them dealing with their final days.
Given that I am going to go on to praise many aspects of this film, I can get to the obvious faults first.  Despite the intriguing premise, it is easy to recognize the romantic story element that runs through this film as somewhat contrived and even sappy.  However, that almost feels like an argument for wanting the film to be something it’s not.  The theme of finding someone and developing a relationship with another is a constant factor in this film (and basically spelled out in the title).  Still, given this aspect, there is a predictable sense as to how things will end up for the characters, though there are commendable ways it plays with convention. 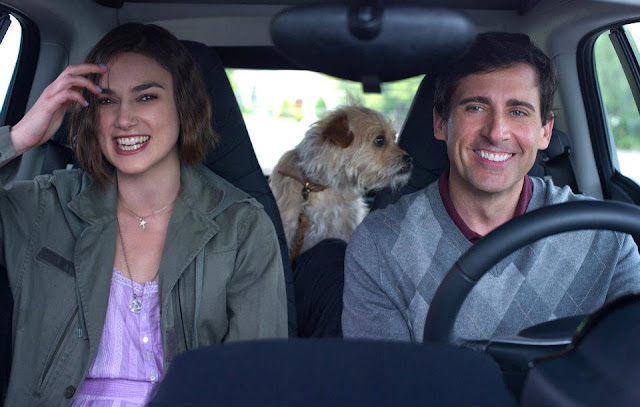 The other issue was something that actually cleared up as the film went along:  the score.  There was a sitcom-y vibe to the way the score entered into this film in its early going, which was upsetting the tone of the film for me, but as the film evolved, so did the music, which ended up fitting quite well into the picture.  There were still moments that did a bit too much to punctuate the emotion one is supposed to have during various scenes, but the film worked a lot of this out over time.
Getting into why I am very happy to really embrace this film, I just love the premise.  Writer/director Lorene Scafaria has said she wanted to, “tell the story of boy meets girl with a really ticking clock,” and has done so while also presenting the idea of a great “what if” scenario.  What if one of the “race against time/end of the world” blockbusters didn’t have a happy ending and we were left to deal with what people were going through back on earth?  The film deals more with this aspect on a wider and broader level in the early acts, before focusing on Dodge and Penny’s journey, but the two do encounter several characters along the way, each with different thoughts as to how to approach their impending demise. 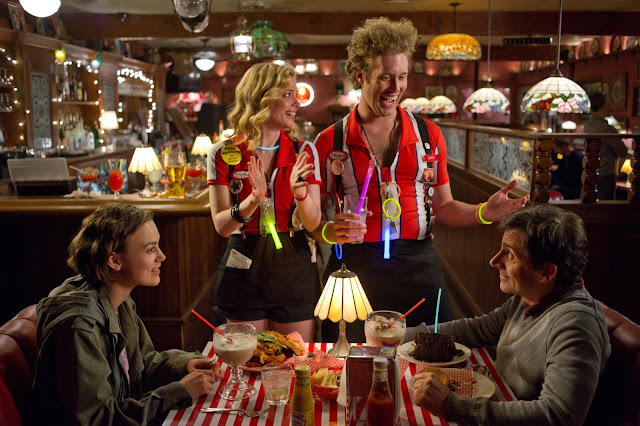 The early goings of the film does provide the chance to see panic and a sense of freedom slowly settle in.  An assortment of actors and comedians all pop up to provide their own logic as to how to handle things.  Patton Oswalt’s character, for example, communicates to Dodge at a “last supper” party that he is able to sleep with all sorts of women now, because everyone has been freed of inhibition.  There is also the apparent option of hiring an assassin to secretly kill you, before the end of the world, so the preference of an untimely surprise is still a possibility.  More blunt examples occur as well, including riots and orgies.  One of the biggest impacts on Dodge is someone leaving him in the care of their dog, with a note that simply says, “Sorry”.
When ‘Seeking a Friend’ does settle on being about the connection of Dodge and Penny, there is still plenty done to make their journey meaningful, both in getting us to learn about them and in seeing more people they encounter.  Whether it is a man acting very committed to the concept of having a fallout shelter or seeing the employees of Friendsies acting as positive as possible, these play like small vignettes that I really found interesting and/or humorous.  In getting to know Dodge and Penny, it speaks well to Carell and Knightley as performers, given that I found them to be a strong pairing. 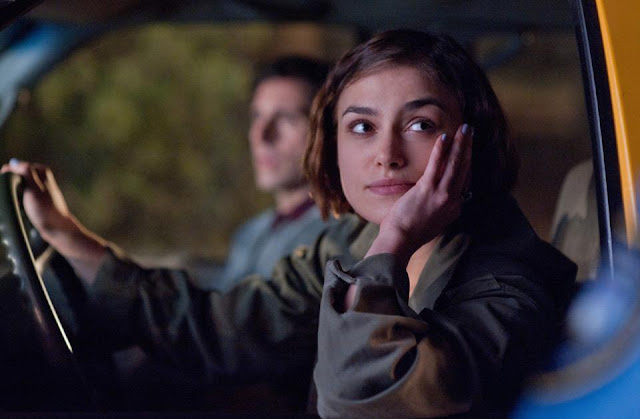 The film is setup as a comedy and advertised as such too, but it seemed clear enough to me that the dramatic stakes were neither going to go underutilized, nor not serve as a reason to put characters in tough spots in regards to choices made and understandings that they come to.  The results make for a dramatic feature with comedy that lessens, as the film moves along.  Fortunately, I find Carell to be a solid performer in this regard, where he can fit in some comic lines, but imbue them with pathos.  I also really liked Knightley in this film and found it an interesting note to see this as one of the few times she has played a contemporary character in a film.
In the past year, I seem to have found myself drawn to film like this.  Melancholia and Another Earth were both on my top ten list of last year and are both films dealing with similar issues, though in a more disheartening and independent sort of way.  Seeking a Friend for the End of the World has more audience appeal perhaps, as the cast is quite solid and the comedic aspect makes it more watchable, but it still veers away from the mainstream by not compromising on its premise.  There is a sharpness and intelligence in how this film plays out and I also found it to be emotionally satisfying.  The film tackles the concept of the end of the world with a well-worn romantic plot at its core, but I really enjoyed watching that endgame play out.

Penny:  So what are you doing with the end of your life?
Dodge:  Oh…catching up on some me time; find god; maybe move around some chairs. 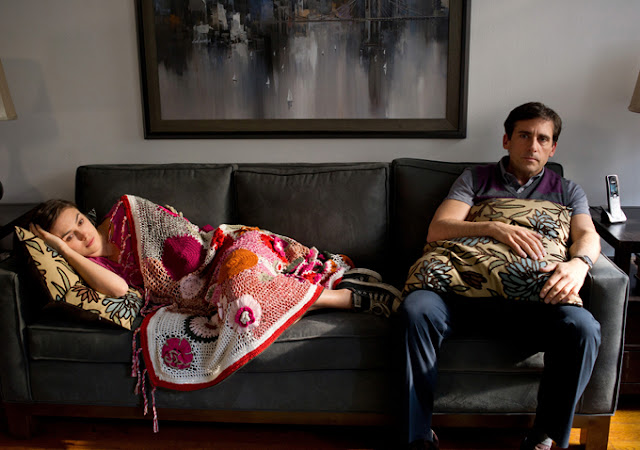