Swinton Excels, While Talking About ‘Kevin’ Can Be Soul Crushing 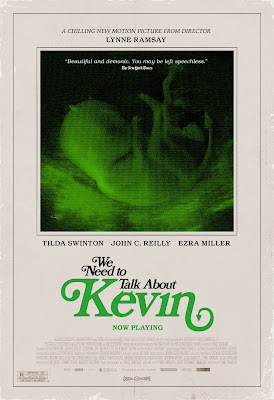 Kevin:  Just because you’re used to something doesn’t mean you have to like it.  You’re use to me.

In times past, when it comes to certain horror movies or thrillers, I have noted that the “creepy kid” subgenre is one that usually gets to me pretty easily.  We Need to Talk About Kevin is not quite a horror film or thriller, but more a psychological drama surrounding the mental state of a mother dealing with her son who is, for lack of a better term, a psychopath.  While his actions certainly escalate to creepy, it is the way this plot unfolds and how we see all of the things the mother has to deal with that kept me involved on an incredibly frustrating level regarding Kevin’s growth from a young child onward.  We Need to Talk About Kevin is certainly well acted, but it very much became an unlikely chore for me to not attempt to reach into the screen and slap Kevin. 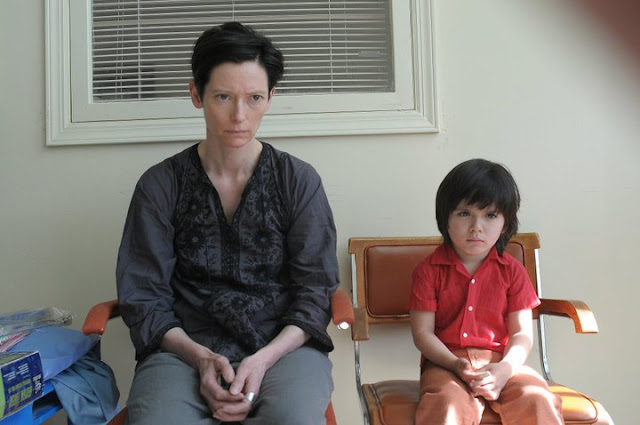 While the film manages to clue you into what is going on, I will tread lightly on what the basics of the plot are.  Tilda Swinton stars as Eva, the mother of Kevin (played as a teen by Ezra Miller).  Eva is currently living on her own, in a small, run-down house, and working a meaningless job near the prison where her son is now located.  The film flashes back and forth between two timelines. One is this present time where we see Eva visit her son and attempt to continue living her life, despite those familiar with who she greeting her with utter disdain.  The other is more or less a depiction of various memories Eva has of Kevin, as he was growing up.
Nothing suggests that Kevin was ever a regular child and all of his actions seem to revolve around making Eva miserable.  As a baby, he would never stop screaming while in her care.  Getting older, he refused to speak, let alone become potty-trained, for quite some time.  As he grew even older, everything about his attitude towards his mother seemed to suggest something more nefarious than just simple, possibly meaningless, foreboding glances.  Of course, only Eva was witness to these actions, while her husband, Franklin (John C. Reily) and younger daughter Celia seemed to think the world of Kevin.  Given that we are aware that Kevin is in prison early on, something sinister is definitely lurking underneath. 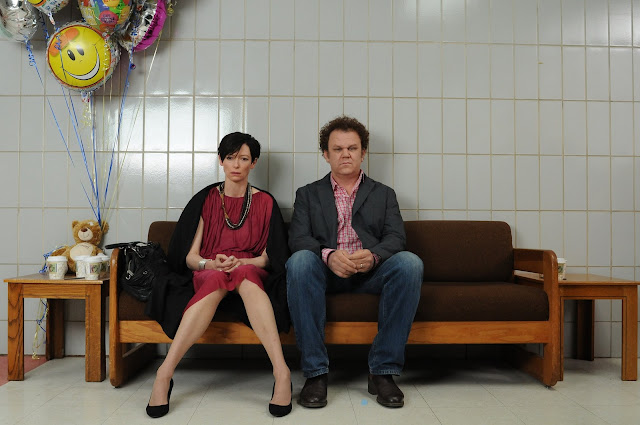 Part of what always gets to me about creepy kid-type movies is the way that only one character is clued into the strange and foreboding situations that are afoot, while everyone else writes off the signs (which is especially tough to take when the kid seems so obviously evil).  Tilda Swinton is really put to task in this film, putting up with everything her insufferable child makes her go through, let alone the mental state we are all witness to, following the events that lead her to her current situation.  It is because of this that I must praise the work done by Swinton and Ezra Miller as Kevin (to an extent), because such a strong reaction was brought out of me while watching this film.  The frustration of not being able to do anything about the mental anguish that one’s own child is putting you through, especially once it is too late, is truly soul crushing and the film is very effective in that manner.

Eva: Why would you have something like that?
Kevin: I collect them.
Eva: Doesn't it a weird thing to collect?
Kevin: I don't like stamps.
Eva: Then what's the point?
Kevin: There is no point. That's the point.

Frustration aside, my compliments for this film mainly stem from the unnerving atmosphere created by the vivid photography seen throughout, the intense close-ups of certain details, some fancy editing, and the score by Johnny Greenwood.  The fact that Swinton is not afraid at all to really portray a deeply affected character definitely helps.  Watching her stress out and deal with Kevin in various other ways is quite interesting, particularly since Kevin is at his most sincere (creepy as that may be) around his mother.  It is a unique type of relationship and chemistry that occurs on screen that creates a weird sort of unsettling balance for the film.
Issues I have with the film basically revolve around a lot of what comes with the premise.  I was incredibly depressed after having seen the film, with appreciation only coming after the fact in regards to what I can step back and admire about the film as a whole.  But while engaged with the film, it was mainly a fixation on the story rooted through so much frustration against what Kevin does.  The length/pacing of the film did not really factor in as a negative for me, but the fact that the emotional response created was rooted in anger more than anything does not make me want to automatically champion the film, regardless of how good the performances by Swinton and Miller are. 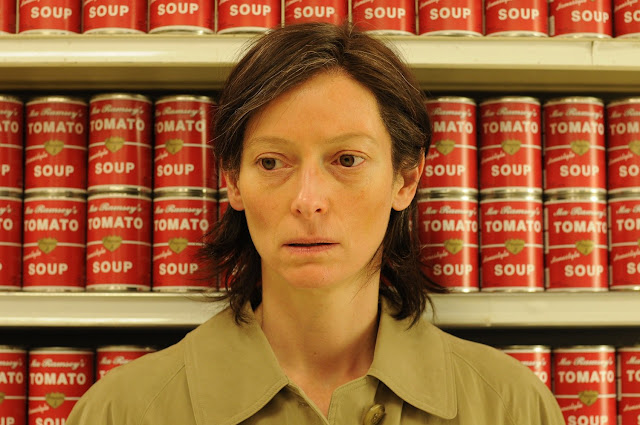 Now, keeping all of these anger-related feelings in check (and trust that I really am trying to do so, as the film’s overall rating should really not be based around how much I wanted to cuss out a child), it is still a good film as a whole.  It is well constructed in a sort of art-house psychological thriller sense and certainly features strong performances by the cast.  We Need to Talk About Kevin is just also a film that did not create the enjoyable kind of stress that one has when watching movies that try to be another iteration of The Bad Seed or The Omen (and yes, I am aware that this film is an adaptation of a book, which is constructed quite differently).  It is a domestic horror story that makes one uncomfortable, but induced lots of frustration as well.

Franklin: Hey, Kev. Listen buddy, it's easy to misunderstand something when you hear it out of context.
Kevin: Why would I not understand the context? I am the context. 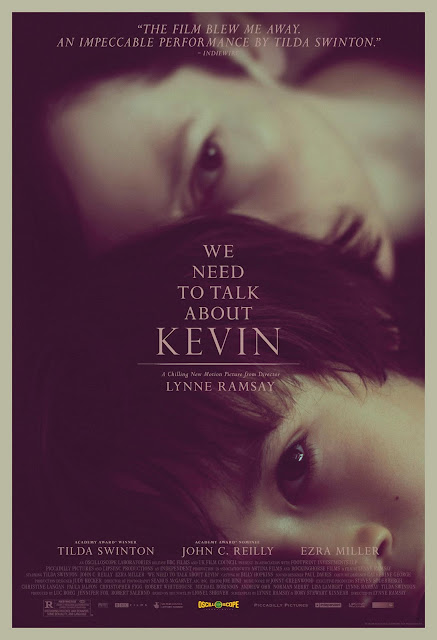