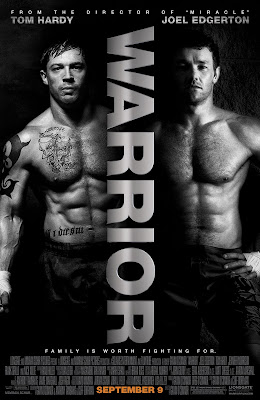 Principal Zito:  Brendan you’re a teacher, you have no business being in the ring with those animals.
Brendan:  Actually, I used to be one of those animals

When it comes to addressing the sports movie genre, I tend to be a bit unenthusiastic.  While there are many good sports movies, I feel it’s a genre of film that really needs to do something special to get me to want to appreciate it more.  Warrior has done that.  It is an inspiring, heartfelt, and action-packed film that features great performances all around and manages to place itself within the higher rankings of the sports film genre.  I would not say it manages to completely subvert some of the standard conventions of this type of film, but it does a great job at embracing some of them, while not turning up the melodrama or going overboard with the dramatic stakes of the film.  Most importantly, this is a film that is completely engaging thanks to its fine performances based around two brothers caught up in believable family drama and the extreme world of mixed martial arts. 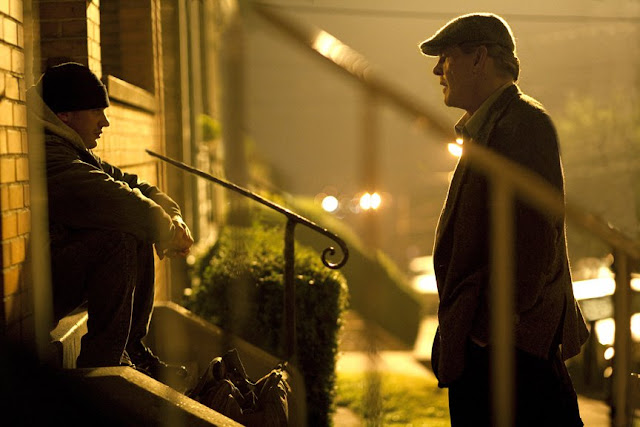 Warrior provides us with two different lead characters to follow, who are in fact brothers.  Tommy Conlon (Tom Hardy) is a former marine who has just returned home and seems in desperate need of blowing off some steam.  Brendan Conlon (Joel Edgerton) is a high school physics teacher and former MMA fighter, who has been sneaking off to easy, small-time bouts in order to keep a roof over his wife and daughters’ heads.   Due to various circumstances, both are in need of a payday and a huge MMA tournament becomes the draw for both brothers, despite the fact that they are barely aware of each other’s presence leading to this contest.
In spite of his extreme contempt for his former alcoholic father, Paddy Conlon (Nick Nolte), the man responsible for tearing the whole family apart years ago, Tommy stays with him, as Paddy helps him train for the tournament.  Brendan manages to find his own way to get on the path for the tournament, which is not helped by the fact that his bruises from fighting get him suspended from teaching.  While we know early on why Brendan needs to do this, Tommy remains a bit more of a mystery, while the film slowly reveals his motives.  One thing is for sure, both men are very qualified fighters.  Brendan is confident when it comes to endurance and skill, while Tommy is a rage-filled powder keg when it comes time for the fight.  Both men have something to prove and knowing what they would fight for provides for the kind of will that should make them unstoppable. 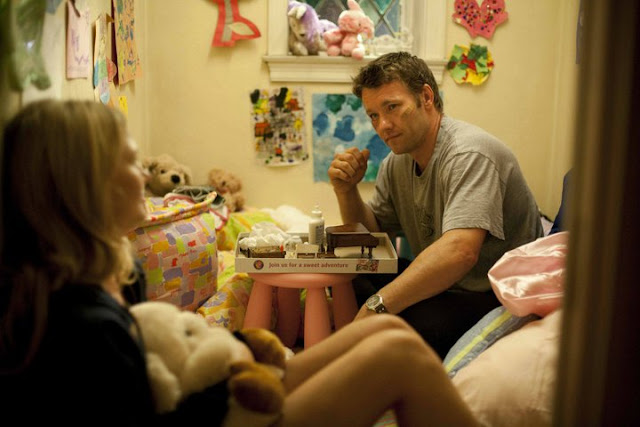 The fact that this film is giving us essentially two for the price of one, by having two different lead characters to follow seems to have made the film all the more engaging for me.  By having this form of storytelling in play, Warrior becomes something like the Heat of sports fighting films.  Rather than simply following one honorable man, as he works his way up to defeating the big bad final opponent, we get to see both sides of the equation and find that both challengers have incredibly honorable reasons for being where they are.  Without going into spoilers, there are a few conveniences that one may have to look past with how things ultimately play out, but these would be petty gripes compared to how effective I thought the story played out in this film.
The actors involved all do a remarkable job as well.  Starting with the leads, who are both actors on the rise, it is great to see what is basically the underdog story performed by two guys that some might not necessarily get behind right away, because they haven’t established themselves as reliable winners to many already.  Tom Hardy, who was extraordinary in a violent drama called Bronson, stole scenes in Inception, and will be known big time come next summer’s The Dark Knight Rises, does a tremendous job of giving life and personality to a brutish character with mystery surrounding his past.  It doesn’t hurt that the many pounds of muscle he added on to himself in order to look very intimidating in the ring worked very well to do just that.  Joel Edgerton, known mostly in Australia, was in 2010’s Animal Kingdom, and is starring in a number of upcoming films, is also great as the slightly more sympathetic older brother trying to look out for his family.  As he is older and smaller in frame, he has the larger challenge of surviving in the ring, but it is due to how well he gets you to root for his character that cheering for him feels so right to do when these all or nothing matches get underway. 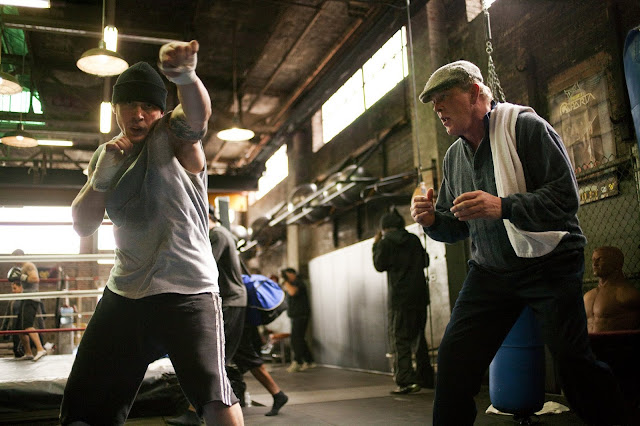 Nick Nolte does probably some of the best work of his career as the father, Paddy.  Estranged from his sons, never having met one of his granddaughters, and only clinging to AA meetings, church sermons, and his book on tape (Moby Dick) to keep him on the straight and narrow, it is rough road to tackle and Nolte pulls it off wonderfully.  His interactions are almost entirely with Tommy and it provides for scenes that do all they need to in order to describe the history without completely having to lay it out.  The other supporting characters on Brendan’s side are not sidelined as simply one-note either.  Jennifer Morrison, Frank Grillo, and Kevin Dunn as Brendan’s wife, trainer, and the school principal are all quite effective as well, never feeling like characters serving as plot points, but as real individuals involved in Brendan’s life.
Director and co-writer Gavin O’Connor manages to get a lot out of this story and these characters, while also making everything feel earned.  When the film gets to the various beats required in these types of films, whether they are fitting of the stamp for emotional manipulation or not, it is justified.  Elements of the story, such as a sick child, how a father reacts to seeing certain characters, or what is to be said about various injuries are not played over-the-top or with too much swelling of the music, but with the right kind of direction that relies on subtlety or reactions based on how we have come to understand these characters.  Is this film devoid of falling victim to many of the same conventions seen in these types of movies? No, but it does a great job of being engaging and properly handling familiar territory.  And who doesn’t love a good montage? 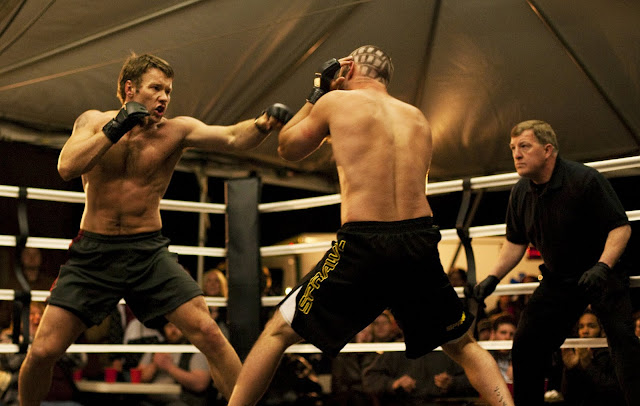 I just realized I haven’t even got to the action scenes in this film when it comes to the MMA fights.  Not being one who watches these sort of events, I can only speculate on this next thought, but the fighting, while exciting, felt a bit over-the-top, which is to be expected.  A movie like this would not rely on boring MMA matches to create suspense for these characters.  With that said, while I was caught up in the moment for many of the fights, I could not help but also be distracted by the disorienting camera angles and editing employed for some of the bouts.  There were not nearly enough wide shots to my liking, with a bigger focus being on capturing the gritty intensity by placing the lens right up there with the actors.  I can say that the thrills of these matches were there, I only wish they were shot a bit better in an overall sense. 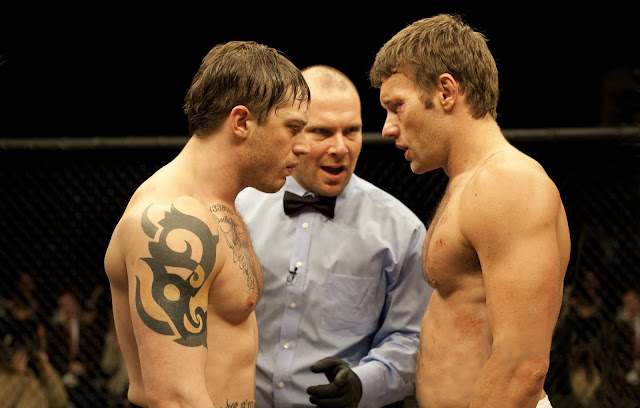 Minor gripes aside, as an assured, character-driven sports film, Warrior is one of the best I have seen in quite some time.  The performances are fantastic; maybe less showy then ones seen in 2010’s boxer pic The Fighter, but certainly on par and with less moments that feel out of place.  The story really grabbed me, as I appreciated how it set up two different plot lines, had them connect at points, and followed through with having the plights of two men converging for a final showdown.  Warrior is a spot-on, engaging action-drama about family, honor, and properly showing what some men would fight for. 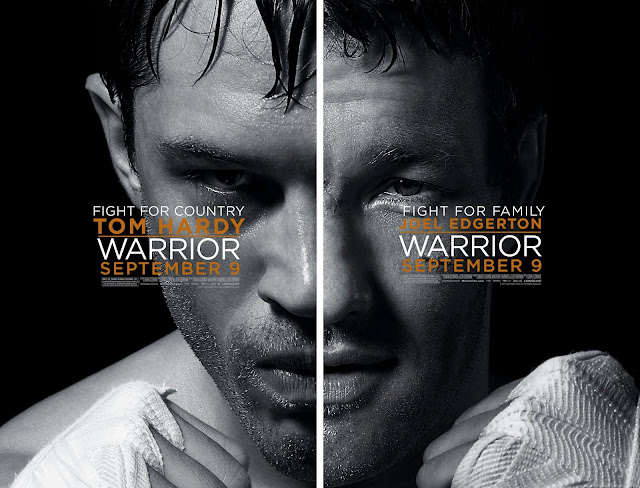