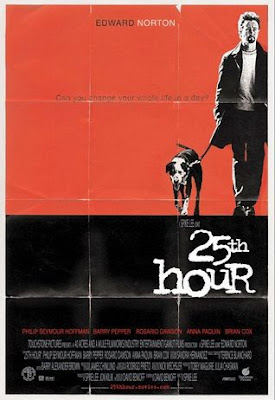 Note:  I took time to revisit 25th Hour, as I had not watched it in quite some time and had been wanting to.  What's posted below are my written thoughts about the film, which I originally had written long ago, before my style had evolved to its slightly better structure seen in my other posts, enjoy.
Monty Brogan: Champagne for my real friends, and real pain for my sham friends.

A Spike Lee joint with all the familiar trade marks, visuals, and a stellar cast. Everyone brings their A-game, especially Ed Norton who is great as a busted drug dealer, who has just one day to settle the things in his life before he goes to jail, essentially ending his old life.

Jakob Elinsky: What do we say to him?
Frank Slaughtery: We say nothin'. The guy's going to hell for seven years, what are going do wish him luck? 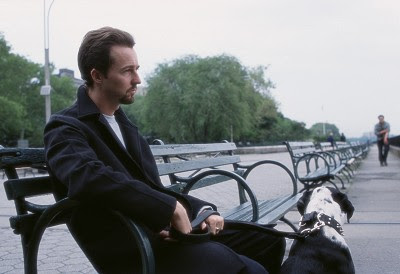 His friends, girlfriends, and father are played by actors who know what they are doing. Philip Seymour Hoffman, Barry Pepper, Rosario Dawson, Anna Paquin, and Brian Cox are all great here.  Like in most Lee joints, the soundtrack sets a good tone for the movie, with a downbeat jazzy quality, mixed with some other music cues to go along with some of the themes, and a few good hip hop beats as well.  The cinematography is also admirable. With a number of scenes that use a variety of different film stock, along with some creative and subtle camera work.

Another part of the film that is handled well is the dealing with the aftermath of 9/11. A great job is done with the opening credits showing a certain setup done after the event as well as a scene later in the movie showing a visual aftermath of what had happened. Spike Lee is a New Yorker, and he does use this film to convey some of his feelings on the subject, without hammering things home to hard.  A scene that overlooks the destruction as Hoffman and Pepper's character have a long conversation, all within a single take is quite effective in this regard. 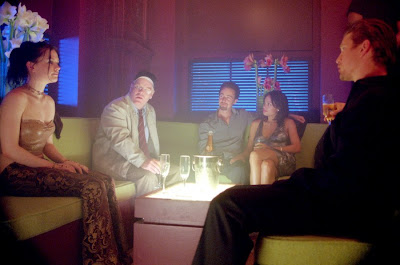 All that being said, the movie can also be very funny with a lot of good human comedy. The opening scene easily sets the tone for how enjoyable this movie is, while taking other aspects very serious as well.  A very good character study about people dealing with themselves and their friends lives.  It is a great showcase for Norton as an actor and Lee as a director.  Wonderful film.

Uncle Nikolai: This is my advice to you: When you get there, figure it out who's who. Find the man nobody's protecting. A man without friends. And beat him until his eyes bleed. Let them think you are little bit crazy, but respectful, too. Respectful of the right men.