‘The Eagle’ Soars At About Mid Altitude 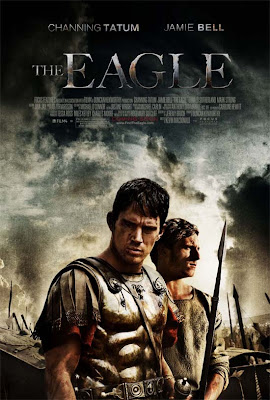 The Eagle presents a story about a soldier trying to redeem his family’s honor by retrieving a lost treasure of the Roman nation.  It is also a buddy film that unites two unlikely friends.  I would have liked to enjoy these two aspects of the film more if this film tried to make it more interesting.  While I appreciated the practical aspect of this film when it came to the action sequences, there really isn’t much else to grab onto here.  The film goes through its predictable motions without developing any aspect that is particularly unique.
The film is set in 140 AD.  Channing Tatum stars as Marcus Aquila, son of the famed commander of the Ninth Legion.  I say “famed” because the Ninth Legion (consisting of 5,000 men) famously disappeared in the mountains of Scotland, and Marcus’s father has been put to blame.  So Marcus arrives at a new encampment, hoping to find a way to restore honor to his family.  After a small battle, Marcus manages to save his camp but is injured in the process, forcing him to be honorably discharged.  Disappointed, Marcus settles into life, living with his uncle, played by Donald Sutherland.  During a gladiator fight, Marcus helps save the life of a slave, played by Jamie Bell.  This slave, Esca, soon becomes property of Marcus, which will prove to help him on his next journey.  Marcus plans to go out into unknown territory in an effort to retrieve a golden eagle, which was lost along with the Ninth Legion.  Since Esca hails from this area, he can hopefully provide help for Marcus, but trust can be a tricky situation when entering into enemy territory. 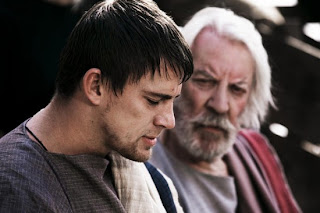 It is fitting that I recently watched director Neil Marshall’s 2010 film, Centurion, which also deals with the Ninth Legion.  While not a great film, it was very well made and crafted an identity of its own, mainly due to the way it depicted its violence (it also helped that the film starred the awesome Michael “Magneto” Fassbender).  The Eagle suffers from a lack of ambition.  It goes through the motions of its plot and features some well made scenes, but does not have any sort of style to make it stand out.  Director Kevin Macdonald, who has made better films (Touching the Void, The Last King of Scotland, State of Play), has stumbled a bit here.  He creates neither a compelling period action drama nor a B-movie period thriller.  What is more of a shame is the fact that this film managed to become better as it went along, from a filmmaking perspective.  The third act actually features some distinct camera work and the action becomes more involving.  It is a pity that the whole film could not have felt more like this. 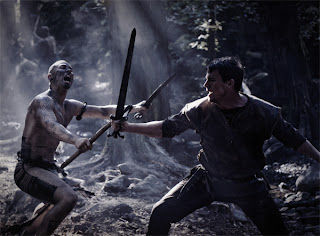 Also not doing the film any favors is the casting of Channing Tatum in the lead.  I don’t have a problem with Tatum in particular; I actually think he can bring the right kind of energy to the right kind of role, even if his range is a bit narrow.  He can easily work at being a character that is tough and handsome, but also soft and a bit dim.  In this film, Tatum is miscast.  The character he is playing has no charisma, so added to a film that already lacks an evocative style; a bland lead does not help the proceedings.  His “here a minute, gone the next” accent does not help the film either. 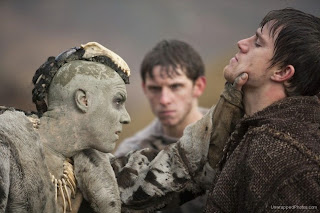 The film does get help from Jamie Bell as the slave, Esca.  Similar to someone like Ben Foster, who I watched recently in The Mechanic (which, ironically, also had Donald Sutherland), Bell is a talented young actor, who brings a certain quality needed to a film that would be otherwise very boring to watch.  Bell knows how to do a lot with some of the emotion he displays in his looks towards the other characters, and the film is all the better for it.  While he is not a saving grace for this film, Bell at least makes his character work and actually provides a decent enough weight for Tatum to play off of.  I also have to mention that Mark Strong turns up for a small role as well, and for some reason I always enjoy seeing this actor. 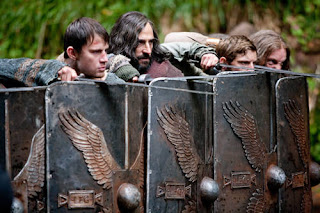 I did enjoy the handling of the action, for the most part, in this film.  While budgetary reasons probably factored into this as well, I can appreciate a film that manages to really dial down the CG and work with a lot of practical elements instead.  It is nice to see a battle scene staged with tons of people that are physically on camera and not digitally created later on for a change.  Despite some of the early action scenes being, once again, filmed incredibly close up and shot at night, the film built its way up nicely, as it staged more cohesive battle sequences.  The PG-13 rating means that this film, which is supposedly depicting the savageness of both Romans and those opposing them, is rather bloodless, but still gets its tone across well enough. 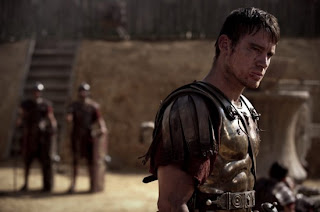 The overall experience of this film is one of the worst kinds of ratings I can give, which is to say that it is merely acceptable.  It is not laughably bad or terrible by any means, but it also isn’t very good; The Eagle just kind of sits in the middle.  There is some decent action, some really nice scenery (Oscar winner Anthony Dod Mantle handled the cinematography here), but the film is also slowly paced and lacks any sort of charm (the final bit at the end is also pretty silly).  I would say seek out Centurion if you are in the mood to learn more about the Ninth Legion in a silly action movie type of way, because this eagle has landed a bit below passable. 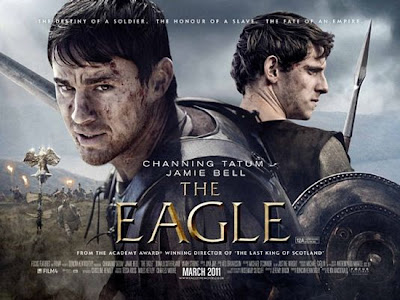