Let’s Be Cops, A Comedy, And An Action Movie (Movie Review) 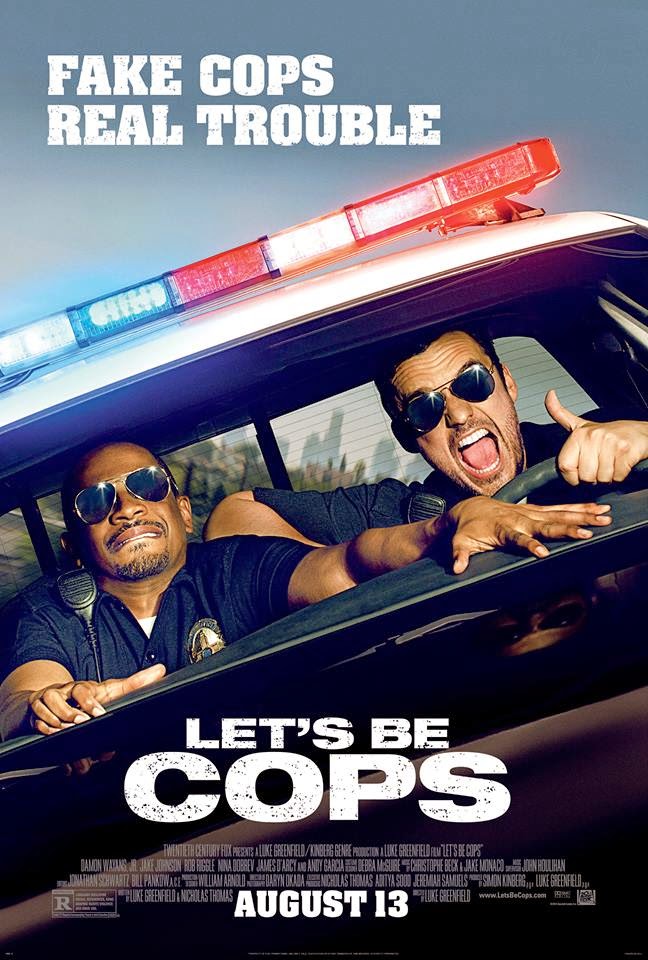 I see a lot of movies and I enjoy rewatching a lot of movies.  One would think that I would rewatch movies that I especially like, but that is not necessarily true.  The example that applies here is a film called Blue Steak.  This was a forgettable Martin Lawrence comedy from 1999, where Lawrence starred as a jewel thief posing as a police officer.  It is not especially clever, but I find it entertaining and seem to watch it, for some amount of time, whenever it appears on TV.  Let’s Be Cops is similar in both being about some guys posing as police officers and that it is not especially clever either.  The film is not even as good as Blue Streak, but hey, I would maybe stop to check in on Let’s Be Cops, were I to find it on TV years from now. 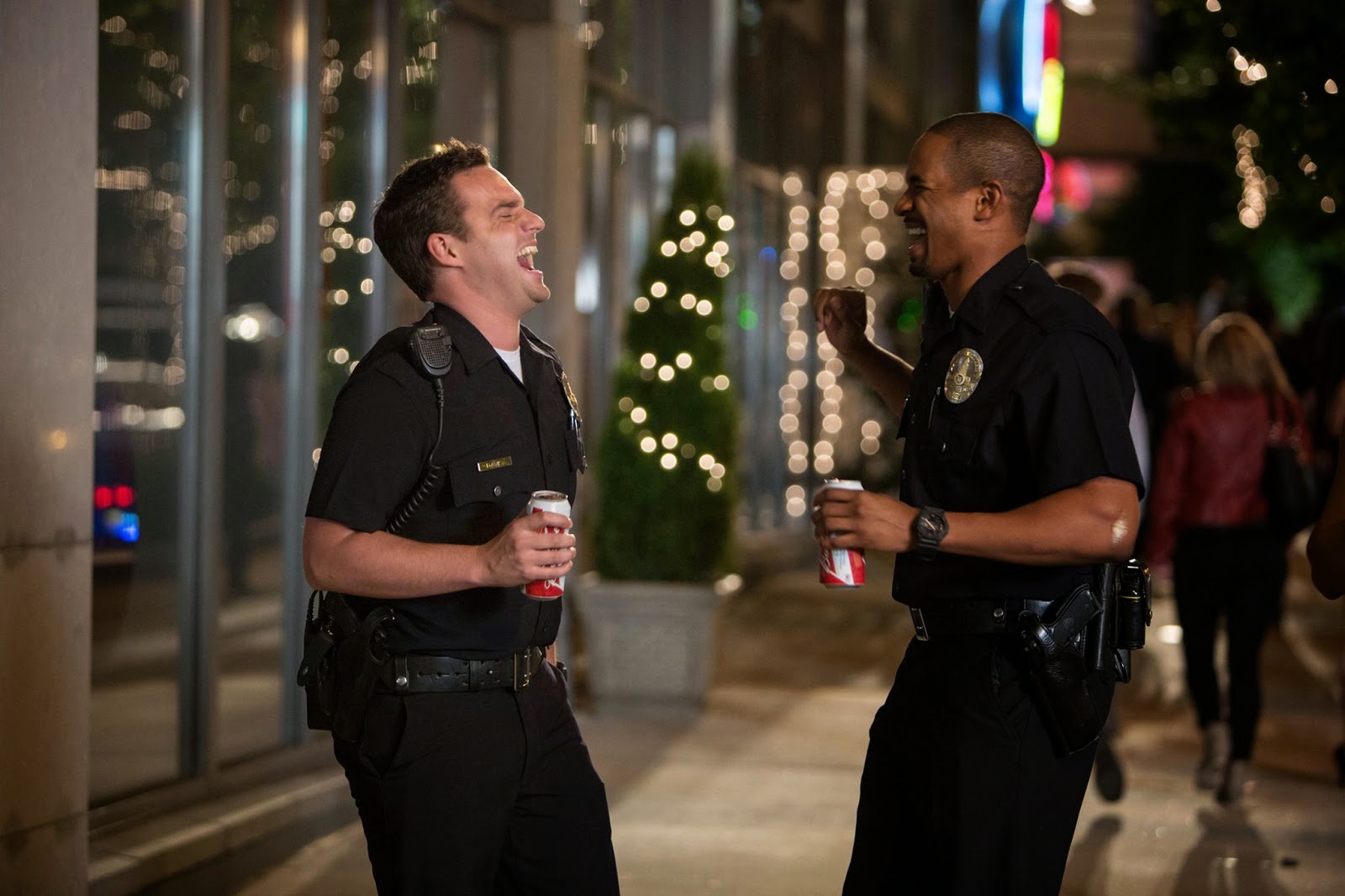 The film has a simple setup that grows into something much more complicated, as best friends Ryan and Justin (Jake Johnson and Damon Wayans, Jr., both seemingly on break from filming New Girl together) decide to dress up as cops for a costume party, only to find that the uniforms suddenly put them in the good graces of many onlookers.  Ryan is a bit more willing to keep the charade going, as he soon purchases a police car off of eBay and gets some basic training via YouTube.  Soon, the two find themselves involved in some nasty business with some gangsters and corrupt cops.

There is a lot more I could talk about regarding the plot and that is part of the problem, Let’s Be Cops has far too much story for a film that seems like an extended skit from a sketch show.  The film goes from a natural place of fun for Johnson and Wayans to be in and utilize their obviously solid chemistry to a serious buddy cop movie.  As a result, the film ends up being far too long and too mixed up in what kind of tone it wants to have.  There is a lot of slapstick humor, there are some dark comedy moments, there is a lot of raunchiness, and then you have the kind of commitment you’d see between Riggs and Murtaugh in the more serious moments of a Lethal Weapon movie, without this film treating that with any sort of irony. 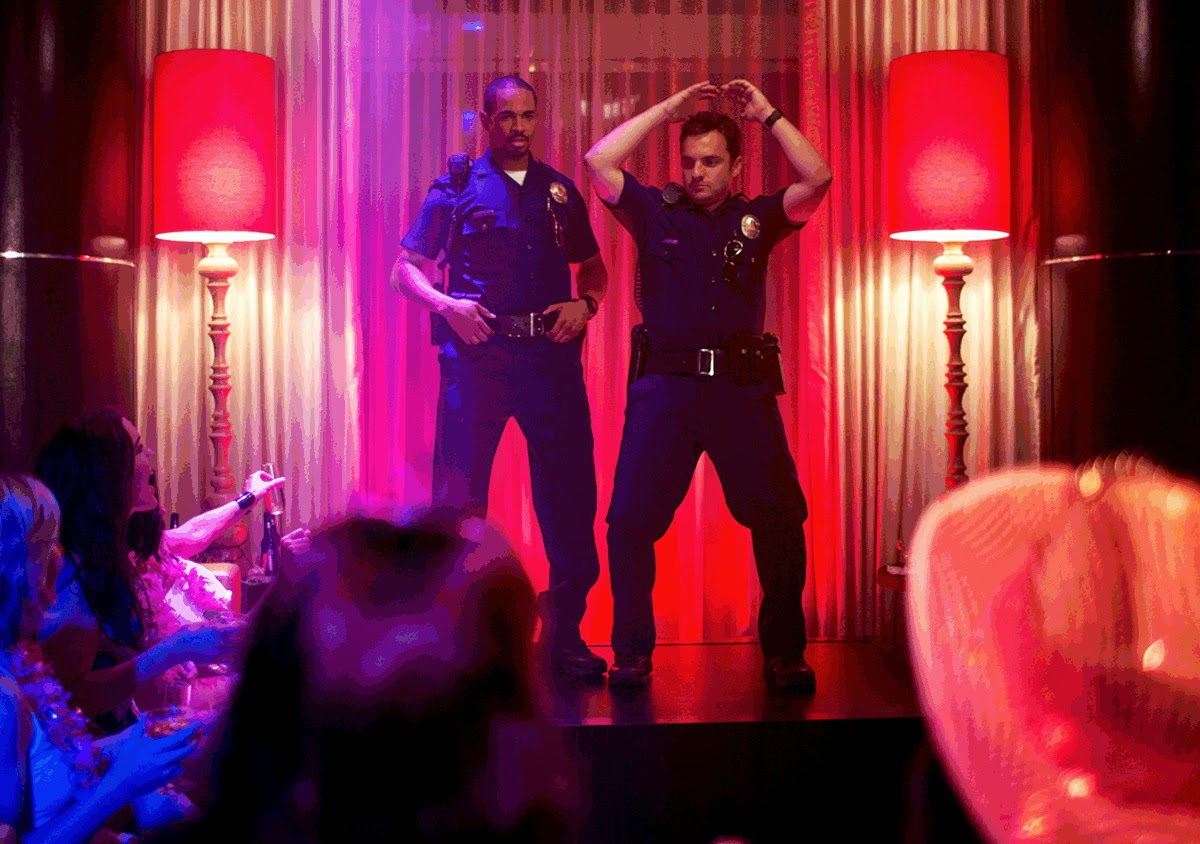 It is not that I need every buddy cop comedy to be Hot Fuzz, but even a film like Ride Along from earlier this year managed to do just enough to be watchable and decently entertaining.  Let’s Be Cops is not devoid of humor, but there are plenty of flatlines in a movie that would benefit from a lot of tightening up and some structural changes.  Drawing out the serious criminal element is not a terrible idea, just not handled in a way that fits with the rest of the film.  Focusing on how Ryan and Justin are not all that they know they can be is a fine base for the characters, but going to the places that this film puts them in, while delivering on their style of humor feels like more of a jumbled mess than effective balance.

The supporting characters are also a mixed bag.  Somehow it was decided to tone down Rob Riggle, a comedian I enjoy in ways that this movie decided not to feature, save for a line of dialogue or two.  Keegan-Michael Key is fun, as he clearly got to play a ridiculous character and say whatever he wanted in an accent.  The Vampire Diaries’ Nina Dobrev plays the token female role and it is actually kind of wonderful that this film does not go the route of making her a hostage at the end.  James D’Arcy, who I mainly know from Cloud Atlas, appears hear as the big bad and was almost unrecognizable to me, along with being suitably evil enough to play a villain in a movie that would have been better served by this performance.  Lastly, Andy Garcia shows up enough to play a typical threatening Garcia role all the way to the bank. 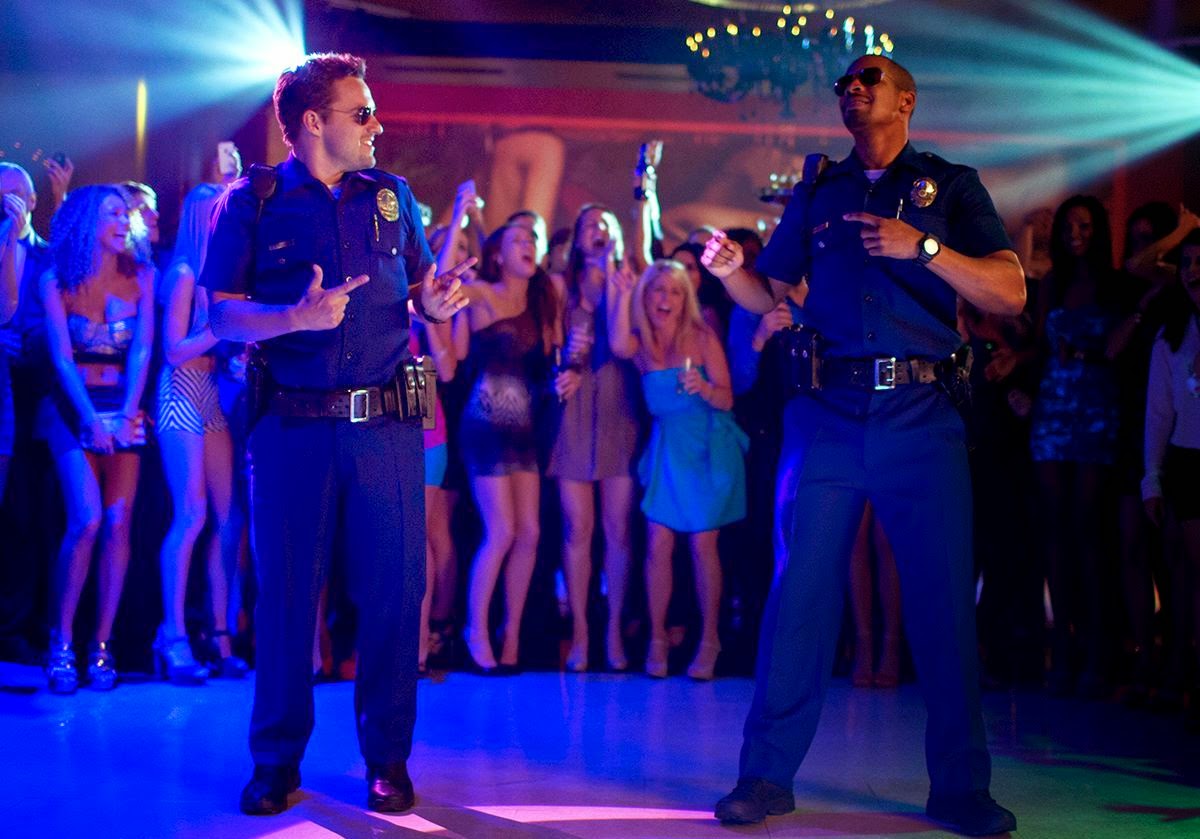 More emphasis should be placed on the fact that Let’s Be Cops is not terrible, just underwhelming in many ways.  The premise does not exactly lend itself to a full on film, but even an 85-minute feature with some simpler arcs would have made this movie click a bit more.  At 105 minutes, the film wears out its welcome pretty quickly.  Not helping is a fairly dull first 15 minutes or so, until the duo finally gets their cop uniforms on, but even as the film carries on there are plenty of dull spots in the film, leading up to a finale more focused on action than the good fun that was seemingly intended.  Still, I cannot deny the moments of fun that are in this film, as the chemistry between Johnson and Wayans is there, the film has a lot of good one-liners, some of the gags work pretty well, and the movie, as a whole, is far from being anything offensive, despite its R-rated humor.

Let’s Be Cops is forgettable and messy, but not unwatchable.  It is less of a missed opportunity and more of the result of a limited idea running its course.  That in mind, the movie has its moments and a share of jokes that work.  The film is nothing special, but it can be harmless fun, occasionally.

Ryan:  That’s what you get. 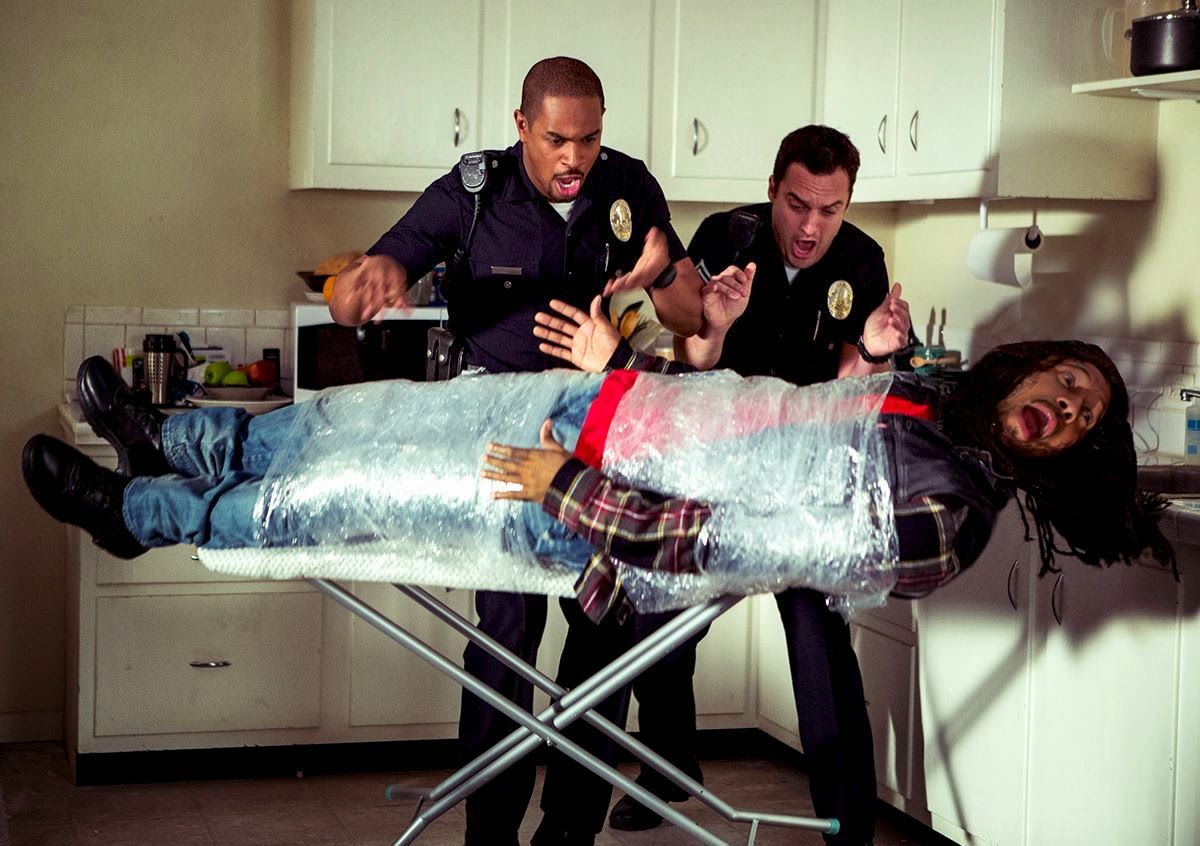 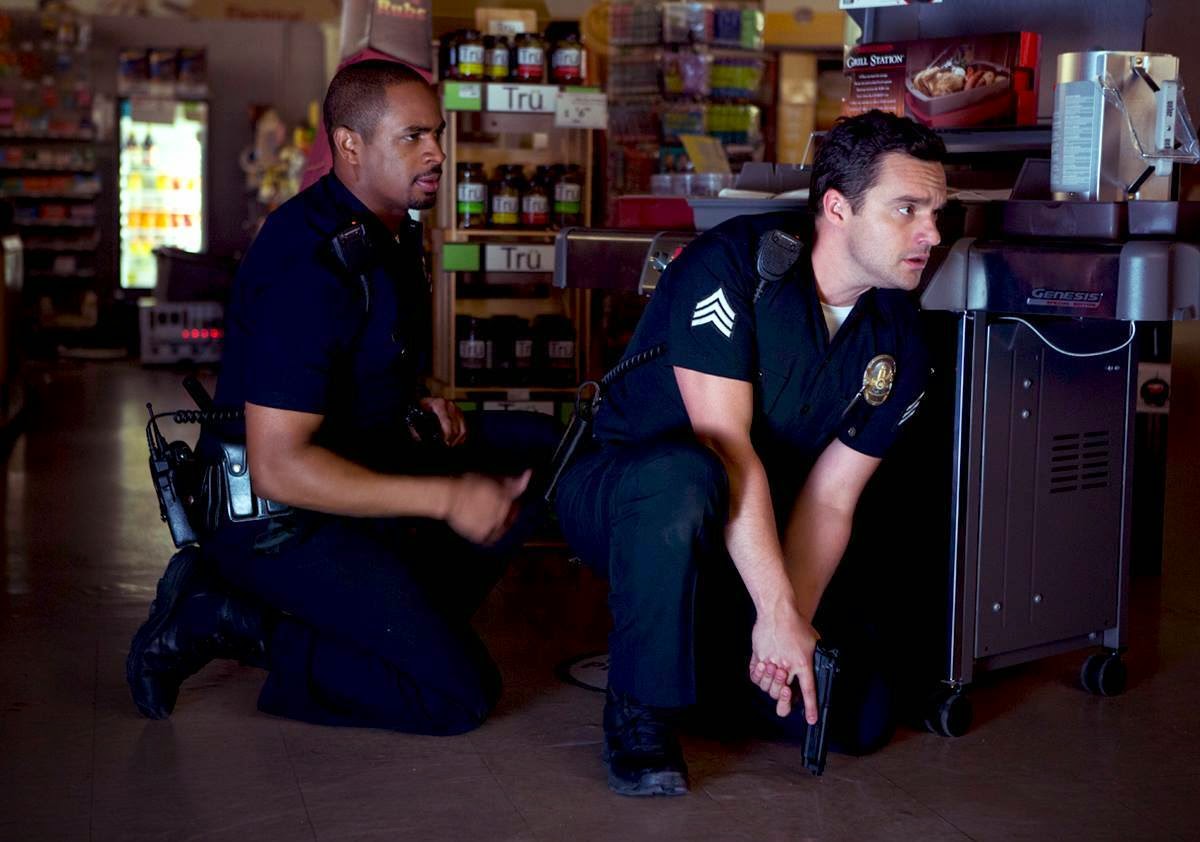