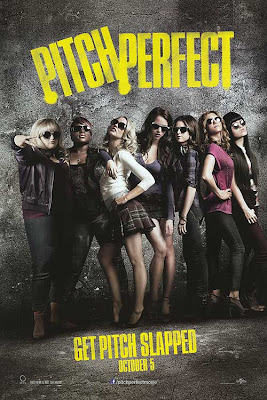 I may be a guy, in his 20s, who writes about movies and Blu-rays, and plays video games, and would have seemingly no reason to want to see a film about competitive a capella groups, but I found the trailer to be slight, but enjoyable, and who can say no to a smile from Anna Kendrick?  Pitch Perfect is pretty much what I expected; sometimes charming, sometimes incredibly formulaic, with a soundtrack that will be dated by the time the film leaves theaters, but it’s harmless.  It has some fun performances and a neat a cappella battle scene that I wanted to see more of, but the standard plot bogs it down.  Essentially, if you are a big fan of Bring it On, you will probably have plenty of fun with Pitch Perfect, so take that as you will. 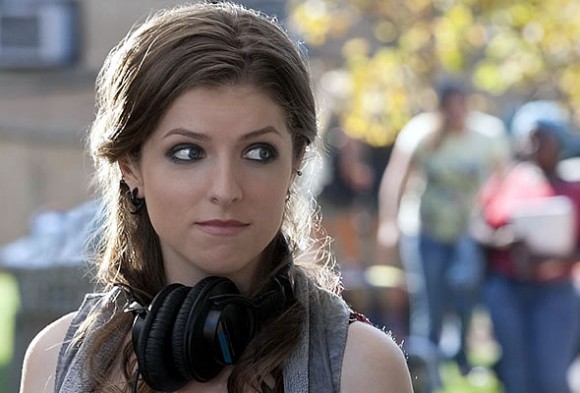 The story follows Becca (Anna Kendrick), an aspiring DJ who wants to pursue a career in LA, but her professor dad has made a deal with her:  Attend a year in college and get involved with an extracurricular activity, then see what LA has to offer.  Becca begrudgingly agrees, heads off to college, and eventually finds herself as a new member of an all-girls a cappella group. How?  This all-girl group, known as The Barden Bellas, is one of the many a cappella groups on campus and they are looking to rebuild, after a disastrous occurrence that we see at the beginning of the film (Hint:  there is far more gross-out humor than expected in Pitch Perfect).

Headed up by Aubrey and Chloe (Anna Camp and Brittany Snow), The Bellas manage to recruit a number of new members, which includes Becca (who Chloe ambushes in the shower, after discovering she has a great voice) and Amy (Rebel Wilson), who refers to herself as ‘Fat Amy,’ so the skinnier girls don’t do it behind her back.  Along with a few more quirky girls (one is a butch girl, one has an incredibly low voice, another is a slut – hilarious!, right?), The Bellas hope to win a cappella championships that their legacy members have won before them.  Their challengers:  The Treblemakers, a rival, all-guy group that is headed by the super dickish Bumper (Adam DeVine).  Fortunately, Becca may be able to inject some originality into The Bellas’ performances to put them over the top. 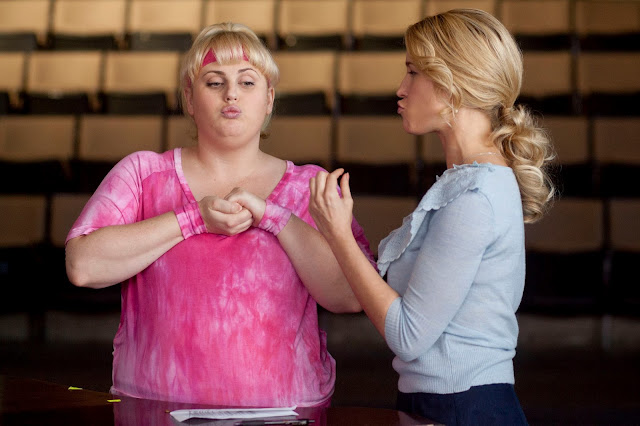 The story goes pretty much where anyone would expect it to, but that is not necessarily a bad thing, if the film is able to make up for it with likable characters or a sense of fun, when it comes to movies about competitive a cappella groups.  Pitch Perfect only gets so far in accomplishing this though.  While Becca is the lead character and we have to follow her generic journey as a sort of throughline for the film, the breakout character will obviously be Fat Amy, as Rebel Wilson does what she can to make “the fat girl is funny” jokes, but with a level of Aussie wit, which gives it a bit more edge.

The film really flounders when it tries to deal with Becca’s romantic suitor, Jesse (Skylar Astin), who is a part of the rival team, but interns at the same radio station Becca does and is set on winning her heart.  There’s not much of a question of how this will play out, but I would have at least liked to have had more time spent elsewhere.  The same can be said in regards to questioning the leadership of the group, with Aubrey wanting to stick to the old way of doing things, while Becca has useful ideas.  This is a plot point that constantly comes up and has such an irritatingly obvious conclusion that made it harder to get behind the fun spirit of the film overall.  It also gets me back to Bring it On, which has a similar theme revolving around the “Cheer-ocracy” in that film (Pitch Perfect is happy to add its own take on this, by having characters add “Aca” to the beginning of many words, e.g. Aca-amazing). 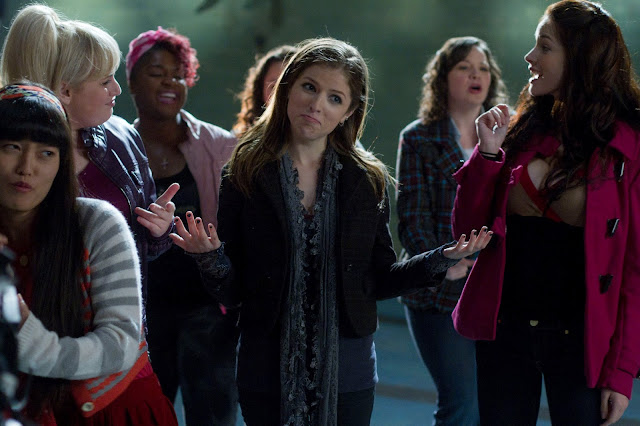 Focusing on more of the good, aside from the occasional moments of charm, which the movie does have a lot of (I did expect this, which is why I saw it to begin with), the music is quite good and the film takes the performance aspect seriously.  While I don’t think the film gets away with being satirical with how its plot plays out, if it even tried for that, the actual scenes that involve these groups singing are quite well-produced, regardless of how much post-production may have been added.  The best scene in the movie, which I wish was longer or there was more of in other areas, involved a sing off of sorts (called a “Riff Off”) between the different groups, which had its own rules and was a lot of fun to watch.  Given that the film is essentially a sports film about singers, seeing the “sport” be portrayed well was certainly a nice touch.

Pitch Perfect is fine for what it is.  I am sure others will enjoy it more than I and I am happy for them.  Anna Kendrick is pleasing enough for me to watch.  I had enough fun with Fat Amy, regardless of how much I can take of eccentric fat characters joking about being an eccentric fat character.  The actually singing and especially the face-offs were fun.  I just wish the film either had a better approach to the story or embraced the idea of having more fun with how generic it is and went for a more satirical approach.  Still, it has its moments and I didn’t feel like I got pitch slapped for watching it. 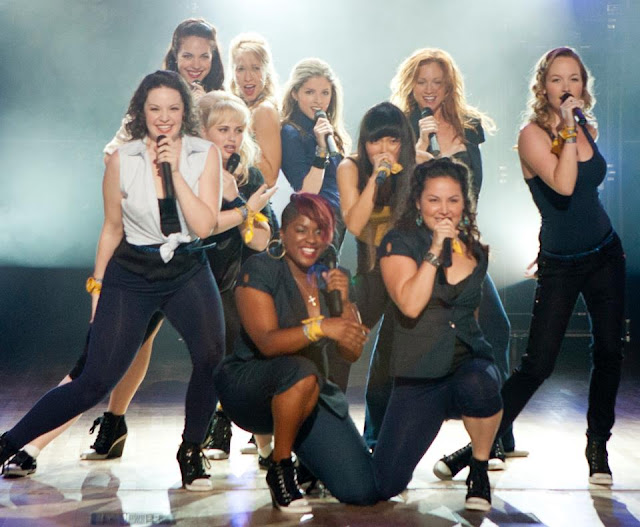 Note:  To focus on more of the weird for a second, is there a channel that plays a cappella championships?  I ask this because Elizabeth Banks (who also produced the film) and John Michael Higgins are in this film as announcers, giving the play by play for all of the singing competitions, but I have no real idea if they are being filmed or what.  They appear to have officiating-type power over the standings, but what if they literally just showed up to events all the time and just happened to be doing sports-like commentary? 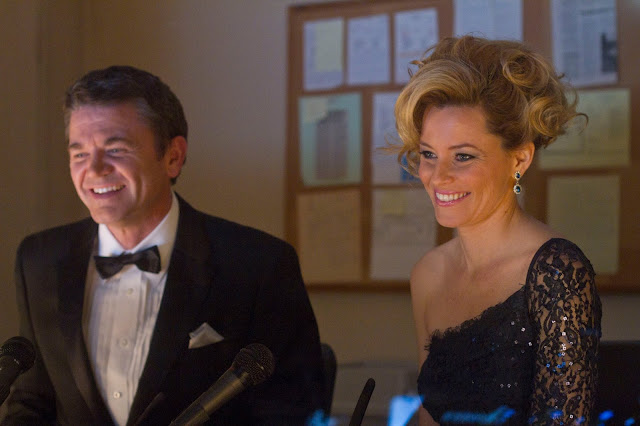