How About That Trailer? - X-Men Apocalypse


I guess I picked the right time to start doing these write-ups, as we have lots of big movies coming and new trailers for all of them. X-Men Apocalypse is among the films looking to clean-up this summer and I have to wonder if it really can do that. Days of Future Past was a solid hit, but it also had the "let's bring everyone back together again" vibe to help it out. Apocalypse will be riding on that film's reception to ideally be another big event, so long as the other superhero films don't overshadow it.


Based on this trailer, it feels like Fox is doing their best to really sell Oscar Isaac's Apocalypse character this time around. I will admit I was a bit nonplus about his initial reveal, but I've been nonplus about this film in general. It's not the fault of the cast or even the concept, which I find to be genuinely exciting (X-Men vs. Apocalypse is a pretty great comic adaptation to see come to life). Really, I think it comes down to Bryan Singer.

To his credit, Singer did make the first X-Men way back in 2000, doing more than just making a comic book movie work again (Blade), but doing a successful enough job to really kick off a new wave of superhero movies. He also made X2: X-Men United, which still stands high in the rankings of all-time great superhero films (Singer was reportedly a mad man on that set as well). That in mind, it has become clearer and clearer to me that his look for X-Men films has no real life to it. Things are generally drab and so are the character interactions (save for a one-liner or two from the more charismatic actors, like Hugh Jackman who will be featured very little if not at all this time around).

X-Men should honestly be a lot more fun and while Apocalypse is the kind of character that ruins fun and brings a certain tone with him, I kind of hope to see fresh blood jump on board for the next entry in this franchise. Honestly, just think of the spark and life that was found in Matthew Vaughn's X-Men: First Class. As someone who was warm but not amazed with DOFP, I can only hope this film is a fitting conclusion to the First Class trilogy that emerged in this 8+ film franchise, but more curious to see where things go next.

Okay, aside from Singer bashing (and I generally like the guy's films and appreciate a lot of he attempts), the film has plenty of other interesting elements. I'm mainly hoping Jennifer Lawrence actually does a good job as Mystique this time (she's clearly slumming in this role), but I'm also excited for more James McAvoy and Michael Fassbender. Given that Nightcrawler has always been my favorite mutant, I could do with more footage of him, but I'm sure he'll have plenty of moments in the film. There's more, but it just amounts to listing cool shots from the trailer.

X-Men: Apocalypse opens Memorial Day, May 27, 2016. We'll see how beautiful this world is after the film arrives. 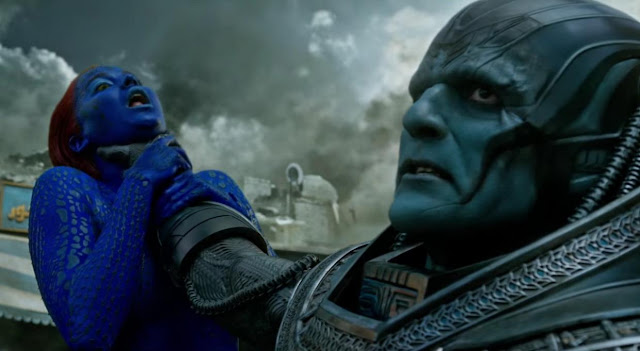