‘Krampus’ Plays Nice With The Comedy, But Naughty With The Horror (Movie Review) 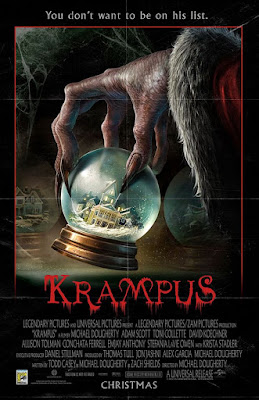 A Christmas horror-comedy is wonderful to see. However, it is unfortunate that Krampus does not quite reach the heights of a film that can sit up with pride over the fireplace. Despite a great cast, some terrific production values and a fine mix of practical and digital effects, this is a film that only manages to just get by. 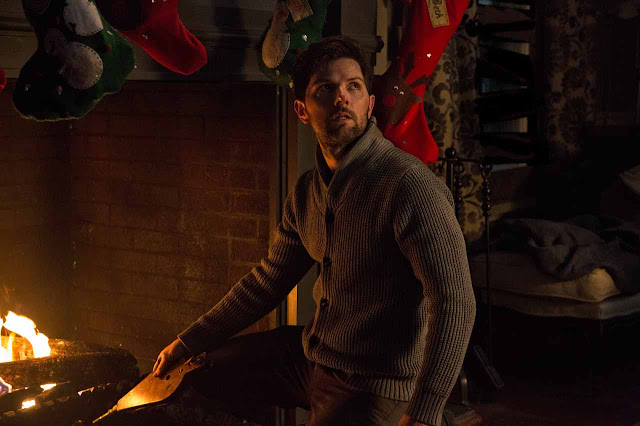 After a darkly humorous opening credits sequence depicting last minute shoppers going to war against each other in a department store in slow motion, the film gets underway. We follow young Max (Chef’s Emjay Anthony) and his family dealing with the Christmas season. His dad and mom, Tom (Adam Scott) and Sarah (Toni Collette), are doing what they can, but nothing can prepare them for the in-laws, which includes actors David Koechner, Allison Tolman and Conchata Ferrell.

Max loves Christmas and has a letter from Santa, but bad behavior from the rest of the family disheartens him and leads him to rip up his letter and throw it out the window. That sort of naughty behavior triggers a dark cloud and blizzard to kick up around the house, taking out all electricity and everything else. There is also the issue of random holiday-themed demons lurking around the area, including their leader, the evil shadow of Santa Claus, Krampus.

The idea of a home invasion thriller with a dark comedy undercurrent blended with a character from classical German folklore is a novel one to say the least. Director Michael Dougherty (Trick ‘r Treat), gets plenty of credit for going to absurd and ambitious lengths to provide an appropriate, character-driven set-up and then mess around with expectations as the film gets into horror territory. Sadly, it is the earlier, somewhat satirical scenes that work best.

A few problems arise, once this film gets into horror territory and it is based around story, character response, and sadly the rating. I am not one to hit a horror or action film too hard when it turns out to be PG-13 instead of R given what I expect and being a level-headed adult. That said, given how we watch victims of Krampus be taken one by one, there is a lack of tension due to a lack of stakes. Those lack of stakes stem from the takedowns of various characters not being intense enough to really communicate the danger everyone is one.

The other issue that stems from this is the lack of concern given to the disappearance and possible deaths of various characters. Those familiar with Trick ‘r Treat are aware that that film had distribution issues because it involved the deaths of several pre-teen characters. Suffice it to say, this film involves some similar scenarios, but the parents are not given nearly enough time to deal with this fact. It would be one thing if the film was breathlessly paced or a bit more tongue-in-cheek about what is going on, but Krampus takes a good amount of time in between the action to keep us coming back to the characters.

This is what helps the film maintain a level of heart, but I also wish there was more payoff to some of the relationship setups. Particularly Collette’s character, who seems to have suffered the most in terms of her family life, but is given little resolve. Scott fairs better at both taking the lead and relating to the others. There are also great moments from the other actors, including a take charge scene from Tolman, who I’m happy to see do anything, after her terrific work in TV’s Fargo. 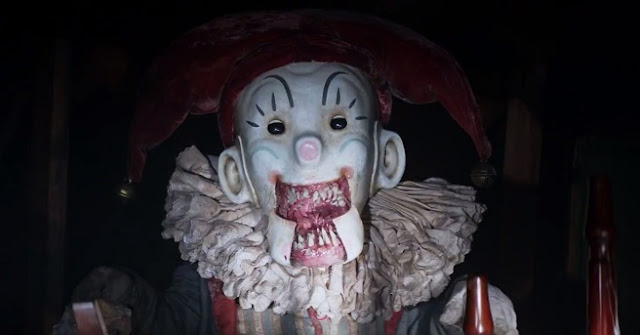 Krampus also makes great use of the visuals. Granted, there are some hectic action sequences that are far too over-edited, but the film does take time to slow down now and again and the visuals we get are quite creepy. There is some over-the-top stuff akin to Gremlins, but there is a level of viciousness to some of the weird demons we see.

If only the film felt like it mattered more. All the right ingredients are here to make a solid Christmas-themed horror-comedy, but the film comes up short in multiple ways once the horror starts to go down. It does have its fair share of highlights, but the film seems to miss out on delivering something better.

There is too much good stuff here to call it a failure, but it merely works as a mediocre effort. Still better take advantage of something different for the holidays though and this holiday-themed thriller has its fair share of entertainment. Have a holly jolly time, but watch out for Krampus.