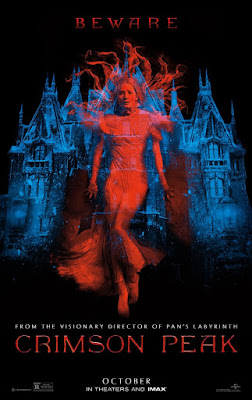 It is frustrating to see a film as magnificently beautiful and well-crafted as Guillermo del Toro's Crimson Peak and sadly know that it does not quite emerge as another astounding success. The man has gone back and forth between deeply personal projects (Pan's Labyrinth) and blockbuster silliness (Pacific Rim) and has even managed to combine the two at times (Hellboy II). Here there seems to be an attempt to once again approach that combination, but while audiences may be starved for a juicy ghost story in October, Del Toro apparently set his sights elsewhere and neglected to fine-tune a script that is up to par with what he is capable of. 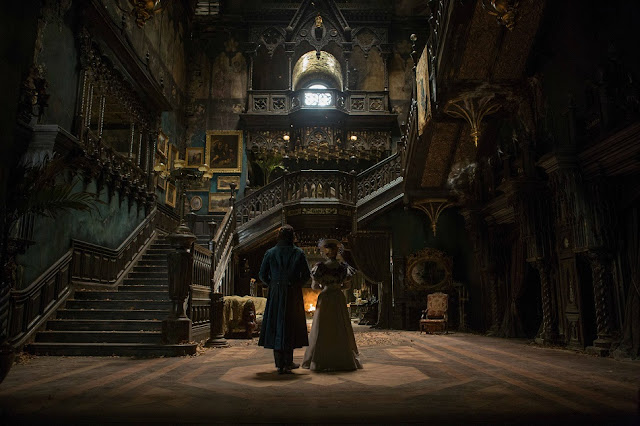 To its credit, this film would be right at home somewhere around 1962, in between The Haunting and The Innocents. You could perhaps push this up into the 70s, given the production values and splendid use of color. There's a time when a story would perhaps be given a little more slack, but that largely revolves around both the acting on display making up for it and audiences getting things they haven't seen before. No matter how good looking Crimson Peak is, it is a film that is largely rooted in ideas we have seen before. That does not necessarily take away from its impact, nor does the predictability spell doom, but Del Toro is savvy enough to know this as well, which leads to confusion on my part.

I am a huge fan of Del Toro and am happy to praise even his lesser works (Mimic and apparently Pacific Rim, no matter how much I personally like it). The guy has all the personality in real life that he does in his films, though in reality, his personality takes the form of a wonderful Mexican teddy bear. In his films, we get amazing imagery centered on a mix of dark subject matter, seemingly innocent characters and fantastical creations. For Crimson Peak, we get a ghost story where the ghosts really don't matter and a gothic romance that is suitably well-done to a point.

The issues arise when it comes to balancing what could either be considered a waiting game for the inevitable to happen or determining whether or not this story has any real weight to it. Crimson Peak features Mia Wasikowska as a young, idealistic writer, Edith Cushing, who immediately falls in love with Sir Thomas Sharpe (Tom Hiddleston). The film is set in the 19th century and despite every sign that Sharpe is up to no good, which includes having a sister (Lady Lucille Sharpe, played by Jessica Chastain) who is always making sinister looks and being able to see ghosts that literally warn her not to trush them, Edith ends up finding herself married to Sir Sharpe and living with him and his sister in their crumbling mansion.

Not only is this mansion crumbling, it sits atop a mountain containing red clay, so the walls actually bleed. It is among the many amazing sights you will see in a film that is clearly caught up in sweeping you off your feet visually, just as Sir Thomas sweeps Edith off hers. That may work for some and in turn hide the fact that there is not much else to this story, once you know all the tricks to be revealed. Even after everyone shows their hand, the film has little to add, which is what puts me is a frustrating state to begin with. I want to love this movie, but its story is not so much captivating as it is a by-the-numbers narrative that happens to be somewhat self-aware.

It is not as if this movie needs more winking, but as opposed to successfully mixing various genre elements like say Sleepy Hollow, the film feels overly reliant on impressing you with visuals and audio in the vein of something like Francis Ford Coppola’s Bram Stoker’s Dracula. That film has its fans, but it is one clearly rooted in looking amazing, over telling a great story, no matter how close to the book it is. That’s where I am with Crimson Peak.

The writing is never up to the task of making the characters and the narrative any more interesting than it needs to be. The performances are strong and committed and I admire the way Del Toro decided to have his actors go a bit arch with their deliveries to enliven the tone. It just appears that this is a film that one would largely care more about if the strength in characterizations was there to have you deeply into the romantic story that serves as the film’s core. 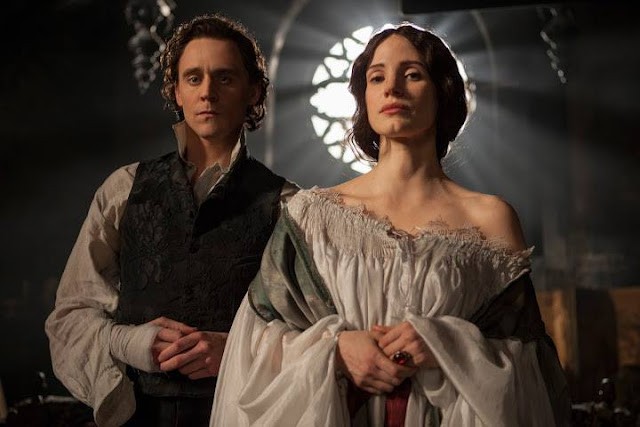 Oh, and this film has ghosts. There is a lot of CG tinkering to make them come to life (amidst all the practical production design), but they are certainly unique in their design and gruesome to look at. They matter little to the story though, which is why I haven’t put much emphasis on them. With this film you are getting something close to Wuthering Heights or Jane Eyre, with a dose of the supernatural, because that’s how Del Toro rolls. The film also has its share of violence and a third act that goes far into exciting territory, as far as seeing how certain actions play out. These are moments that fit well into Del Toro’s wheelhouse, so it’s fine to see it all take place.

At the end of it all, you have a film that screams at you literally, when it comes to showing off its style. Sadly, the narrative fails to be more exciting. If it wanted to echo more satirical beats in the hopes that the audience knows what they are getting into, the beats are not sharp enough. If it wanted to be completely serious, well it succeeded, but at the expense of not keeping the secrets secret for very long to anyone that has ever seen this sort of movie. The thing is though, I still had a very good time watching the film. Hopefully Del Toro can deliver a more fully-realized script on his next project, but at least in every other category, I am deeply pleased with what I watched. 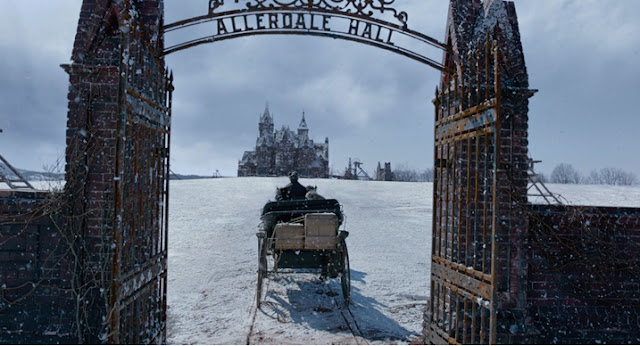