'Insurgent' Continues 'The Divergent Saga', But Is Still Not Very Engaging (Movie Review) 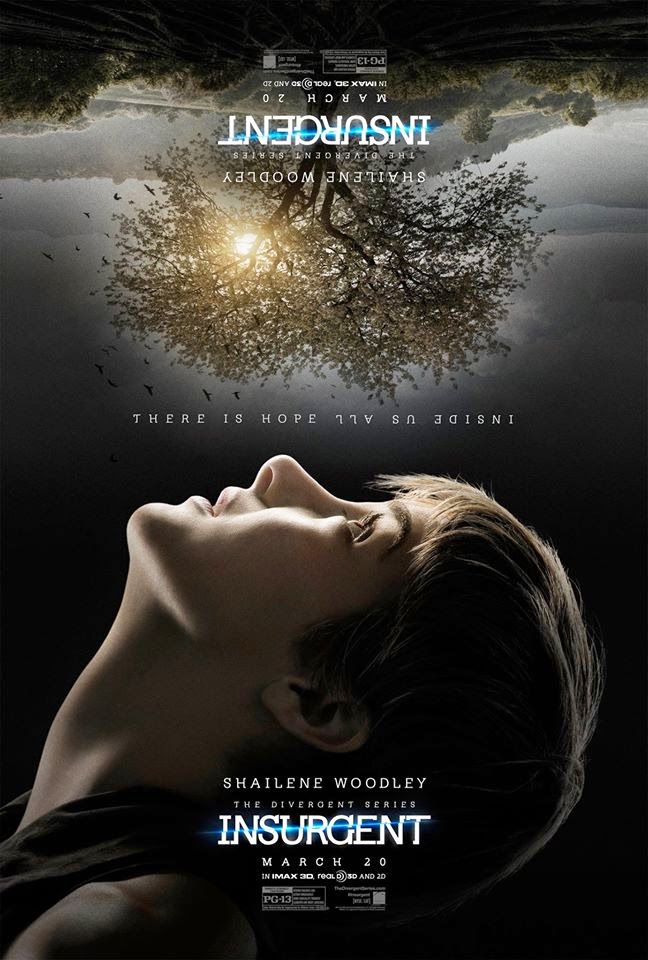 Last year I watched the first entry into 'The Divergent Saga', which introduced me to Tris Prior (Shailene Woodley) and her overcomplicated world of factions existing, in a dystopian society, built from the ruins of Chicago. It was a messy film with some neat ideas, but ultimately not all that memorable. I say this because the sequel, 'Insurgent' does little in the way of handholding to reintroduce me to this world. Enough was done so I was not lost, but my lack of memory concerning Tris having killed what appears to be a major character in the first movie, so much so that lots of dialogue surrounding this comes up, seems to indicate how uninvested I am in this franchise. It was not for a lack of trying, as this film is loaded with talent and some nifty visuals, but ultimately, my lack of concern for the thinly drawn characters or the primary story held me back from embracing this sequel any more than the first.

It does not help that 'Insurgent' takes a while to really get going, in terms of the stakes at play and what character motivations are important. The film essentially boils down to Kate Winslet's evil Jeanine character wanting to open some box that was found in the home of Tris' dead parents (Ashley Judd and Tony Goldwyn briefly make appearances). She needs Divergents to do this, which means hunting them down. Meanwhile, Tris, her tough boyfriend Four (Theo James), her brother Caleb (Ansel Elgort), and her rival Peter (Miles Teller) are all on the run, after living through the violent mess that ended the previous film.

There could be something more to say about how 'Insurgent' manages to have three of Woodley's different on-screen boyfriends from various films (see: 'The Spectacular Now', and 'The Fault In Our Stars') all sharing screentime together with her, but that would be more about my desire to see a film like this that has a much better sense of humor about itself. Part of my issue with 'Insurgent' is its consistency. There is a moderate amount of fun to be had in some of the banter, as poor Miles Teller is at least given some time to be humorous, but the film is deadly serious, without much time spent to really understand why any of this matters, beyond the fairly generic conceit that this group of people wants to kill this other group of people. Hand them all a bunch of funny names and specific costumes and you have a cinematic world to invest yourself in, but what does it matter?

The other thing I wonder is what we are supposed to take away from this film. Yes, it is great to have another YA adaptation that centers on an empowered young woman, but what else is there this time around? I may have been more positive if Tris didn't seem like such a side character in the grand scheme of things. Sure, she is apparently "the chosen one", but so much of this film sidelines her, allowing for macho Four to do a lot of the heavy-lifting. In fact, while we, the audience, know that Tris being a Divergent is important, the film takes forever to get the other major characters to realize that she is the one most Divergenty of all the Divergents. Again, my memory of the first film is apparently hazier than expected, but this wasn't a thing we had already established?

Robert Schwentke ('Red', 'R.I.P.D.') steps into the director's chair for this film, which seems like a downgrade from Neil Burger ('The Illusionist', 'Limitless'), but he honestly does take the film to some interesting places visually, while also ramping up the pace to make 'Insurgent' at least a fairly watchable film. We see the turf of other factions, including the non-liars (Candor) and the hippy people (Amity), as well as the factionless (led by a brunette Namoi Watts, so we don't confuse her for Winslet), and each one is distinct enough.  Add on the final 20 minutes, which features a lot of wild CG-dream action, and you at least have a film that will make good use of IMAX screens.

Still, while the direction is solid enough, it took three writers to adapt Veronica Roth's book into a film and while some of the action-driven scenes are well-staged and generally character-driven, the dialogue is so perfunctory that it somehow keeps newcomer actors to this series like Watts and Octavia Spencer from being more interesting. It says something when your film, which is packed with good actors, is never able to really utilize them in a more engaging manner, yet Jai Courtney as Eric actually comes off as a more entertaining presence than ever, given how ruthless this film is when it wants to be, giving him the chance to be a villainous proponent of the rather ample amount of gun-related violence in this young adult novel adaptation. Both sides use guns a lot, actually, which is not the worst thing (despite the implied lack of consequences, given the lack of any blood), but remember when kids just used wands?

If anything, the main frustration comes from how much good talent is here, yet feels largely wasted. I like a lot of this cast and see the semblance of good ideas throughout the film, but despite being visually engaging at times, 'Insurgent' feels empty. Woodley is fine in the lead role, but I have no real understanding of what it is that she, as a character, really needs to accomplish overall. Additionally, somehow the film manages to bring a sense of closure to a film series that still has two entries left, but I have almost no interest in where anything could really go from here. 'Insurgent' may have thrown us deeper down the rabbit hole, but I'd still rather crawl out than explore.