‘Cinderella’ Is All Dressed Up And Ready To Go (Movie Review) 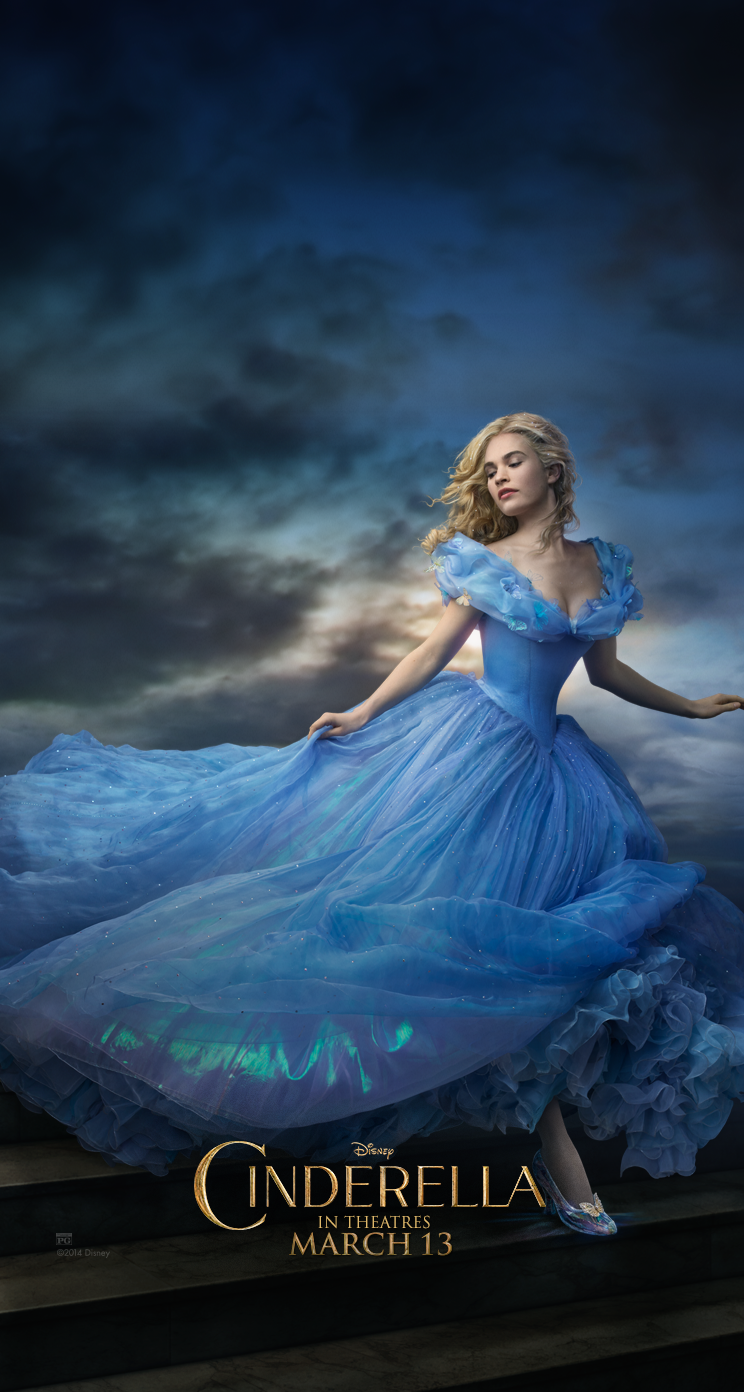 I was not sure what to expect from Disney’s new Cinderella. The track record has not been great for the recent crop of live-action remakes of classic Disney animated features. Alice in Wonderland was elaborate, but bland; Snow White and The Huntsman (not Disney) went the forgettable “dark and gritty” route; and last year’s Maleficent turned a good idea into a CGI mess, with far too much tonal imbalance. My anticipation was not high for yet another one of these films, but low and behold, it turned out to actually be pretty good. 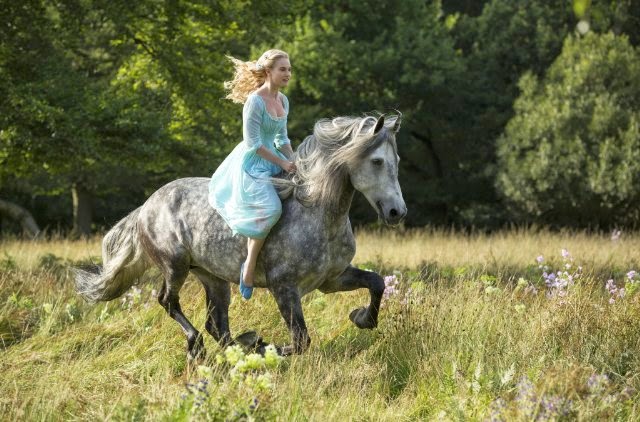 While not a direct remake of the 1950’s Disney classic, this live-action adaptation does hit all of the basic story beats, with a little more backstory thrown in. Lily James stars as Ella (later nicknamed “Cinderella” by her evil stepsisters). After the death of her parents, played sweetly by Hayley Atwell and Ben Chaplin, Cinderella finds herself waiting on hand and foot for her evil stepmother, Lady Tremaine (Cate Blanchett), and her two evil stepsisters, Anastasia (Holliday Grainger) and Drizella (Sophie McShera). As fate would have it, Cinderella meets Prince Charming (Game of Thrones’ Richard Madden) prior to the fateful ball where the two will meet again. Getting there proves to be difficult, but with the help of a Fairy Godmother (Helena Bonham Carter, who also narrates the film), Cinderella has the chance to look her best.

That is almost beat for beat what takes place in a sizable chunk of the running time, with a few added twists to the story here or there, but I do not feel like I am spoiling anything. I should not make assumptions about the readers of this review, but everyone does pretty much know the story already. With that in mind, I was surprised that this film was able to get around that issue and be an enjoyable romantic fantasy anyway. Yes, the film is held back by basic familiarity and a lack of much else in terms of narrative push to really have had me more invested in what would take place, but it works as an entertaining cinematic experience nonetheless. 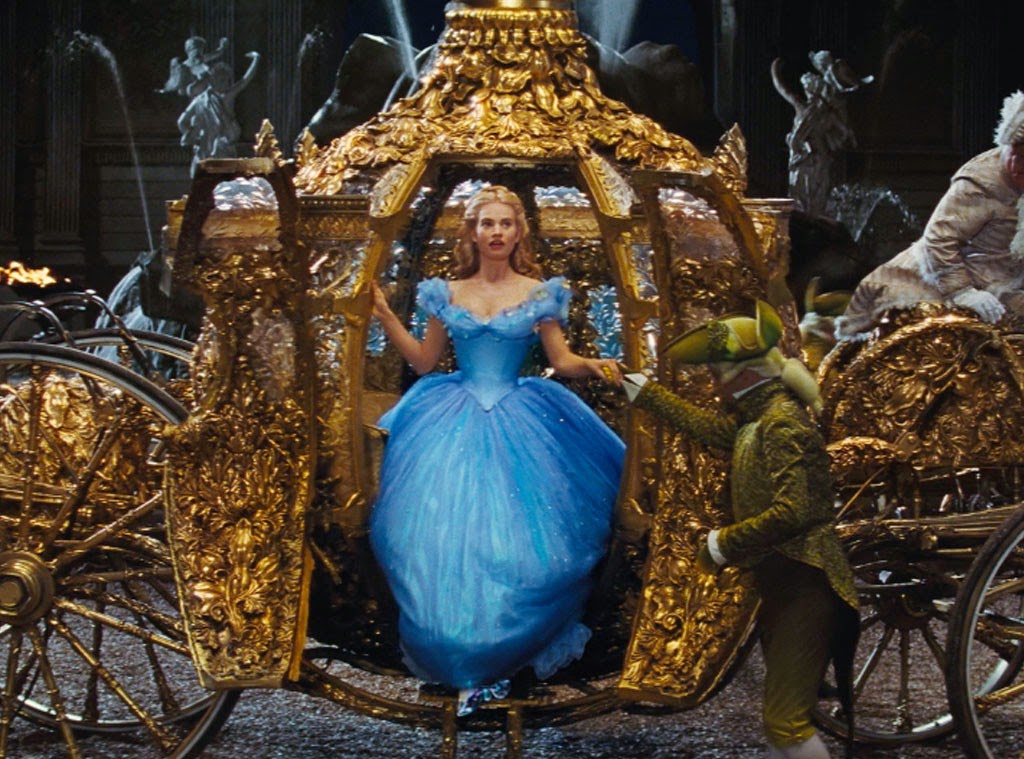 A lot of this comes from restraint. The film is quite elaborate in its presentation, make no mistake about that. Between the costume design by Sandy Powell and the production design on display, this film is wonderfully colorful and just as elaborate as any award season period film. What I am referring to more, in terms of restraint, is how the film knows how to say enough. One of the cinematic highlights for many viewers will obviously be what kind of fantastical creations occur, based on what the Fairy Godmother brings to the film. As opposed to Maleficent, just enough is done to bring these elements to life. The pumpkin turns into a carriage, mice turn into horses, Cinderella is suddenly given a fantastic outfit, topped off with glass slippers, to go to the ball with, but the film does not overdo it.

Helping things further is the cast.  A genuinely likable bunch of people are featured in this film, with a villainous performance from Cate Blanchett that is as good as expected, because she is 2-time Academy Award winner Cate Blanchett. Cinderella may not seem like the most interesting of characters, but Lily James does a lot to make her genuinely nice qualities standout, while unfortunate things take place around her in her own home. Once given the chance to breathe thought, she equally does enough to remain an engaging presence. I was also happy to see a Prince Charming that did not feel so bland. The dialogue has a level of wit that I enjoyed and screenwriter Chris Weitz should be commended for doing just enough to have fun, without having the need to push it into satirical territory akin to Enchanted or The Princess Bride. 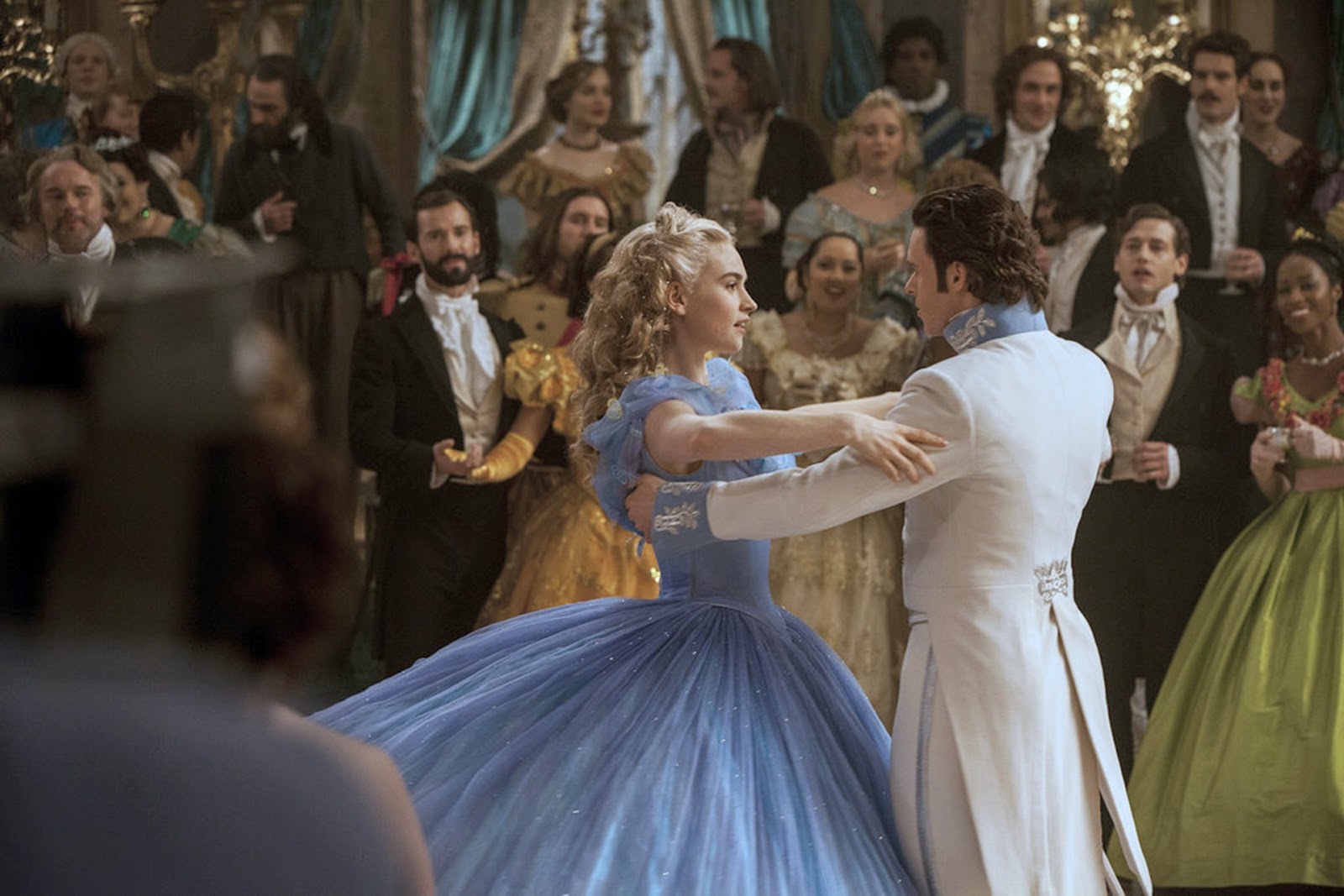 Sometimes a straightforward adaptation works just as well, which was evidently what director Kenneth Branagh thought as well. While not going as overboard with the Dutch angles as with Thor and his other more recent directorial efforts, he manages to keep the film moving and fun enough, while playing up the drama of Cinderella’s station in life as a servant for all it is worth. I did not enjoy this young girl being tormented and abused, as has been seen in various past incarnations, but it was also only a factor up to a point and it was done well enough to have me care, without there being any imbalance of the sort of tones this film goes for.

There are other nice things as well. The production values are quite good all around. Other cast members, including Bonham Carter, Stellan Skarsgard, Derek Jacobi, and Nonso Anozie all make a fine impression. The score by Patrick Doyle is suitable enough. Really, I am happy to say that Cinderella is quite charming all around. It is not the quintessential fairy tale story out there, but it is a fine recreation of one of the more popular princess stories out there. Many are sure to find it pleasant in the same way.

[Note: Initially I was more excited for Frozen Fever, which plays just before this film begins. While I was surprised by the overall quality of Cinderella, I will also say that Frozen Fever is a nice little short film that brings us just enough of the characters that many really responded to the first time around.]

Prince Charming: I have to see her again. 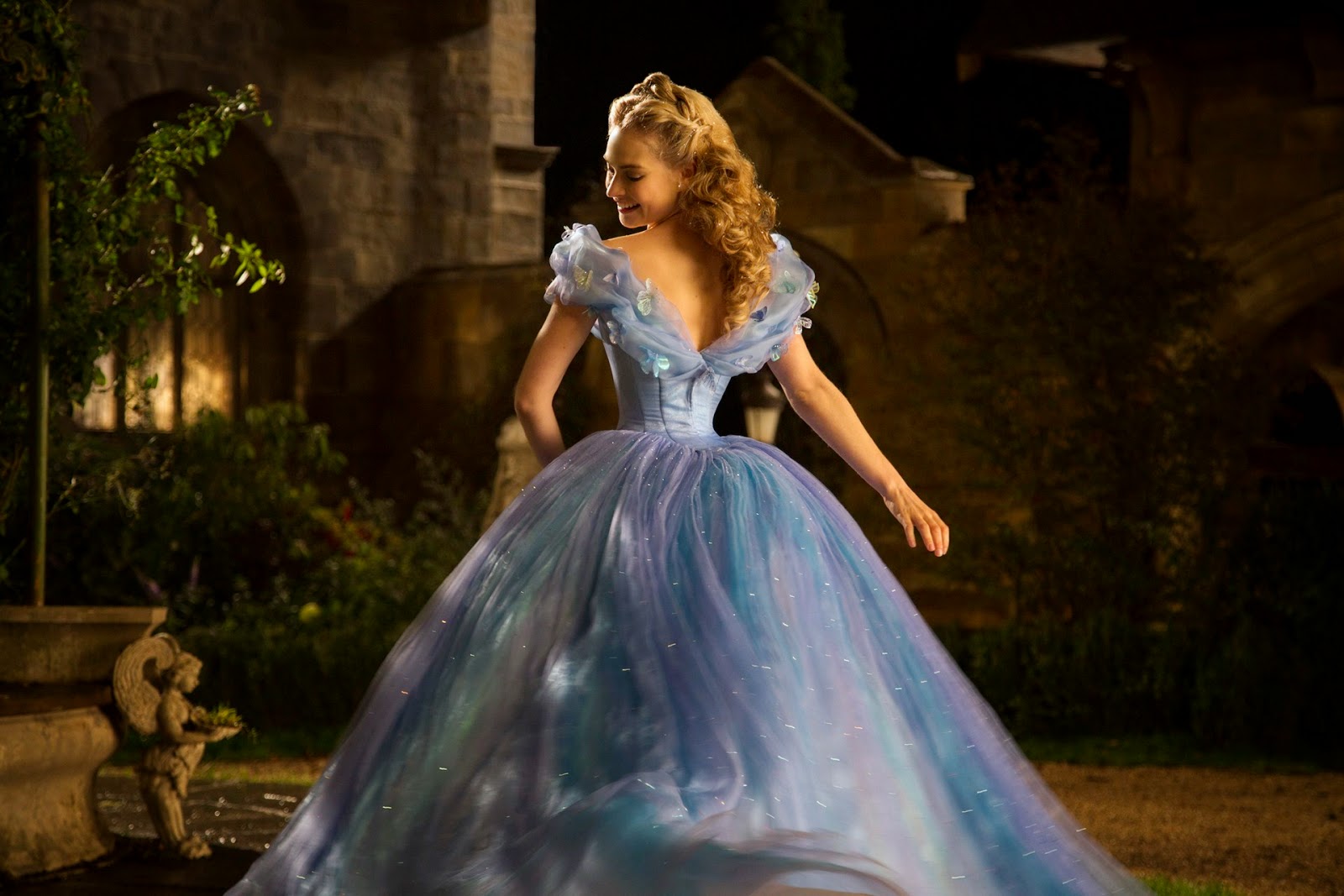 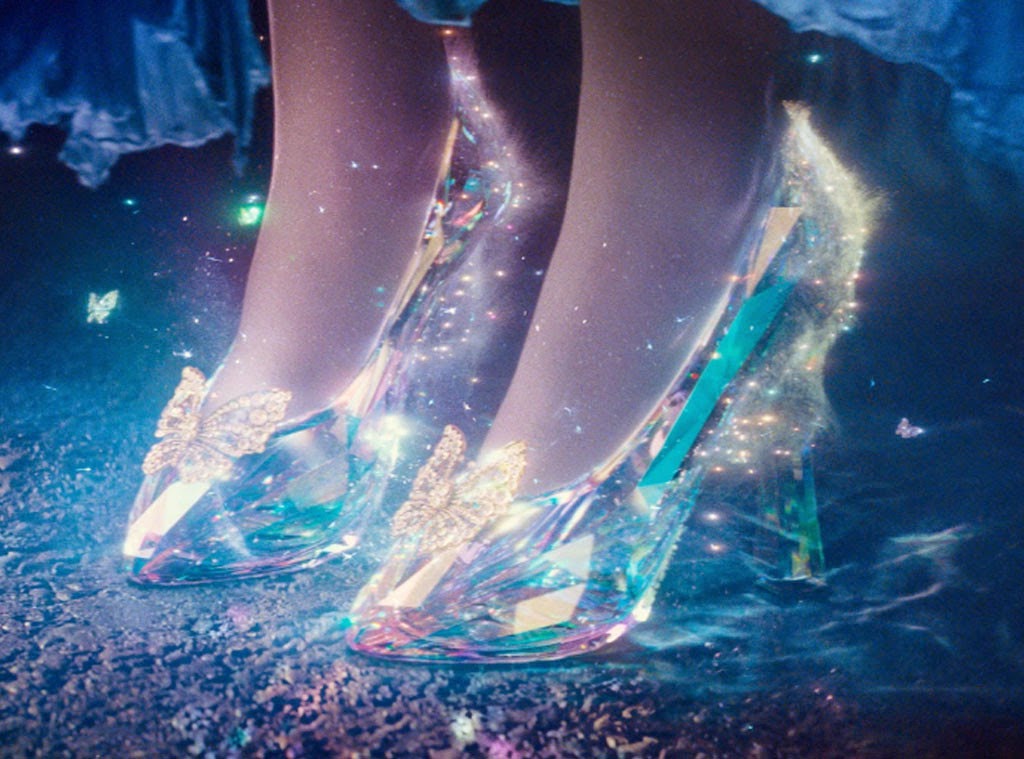