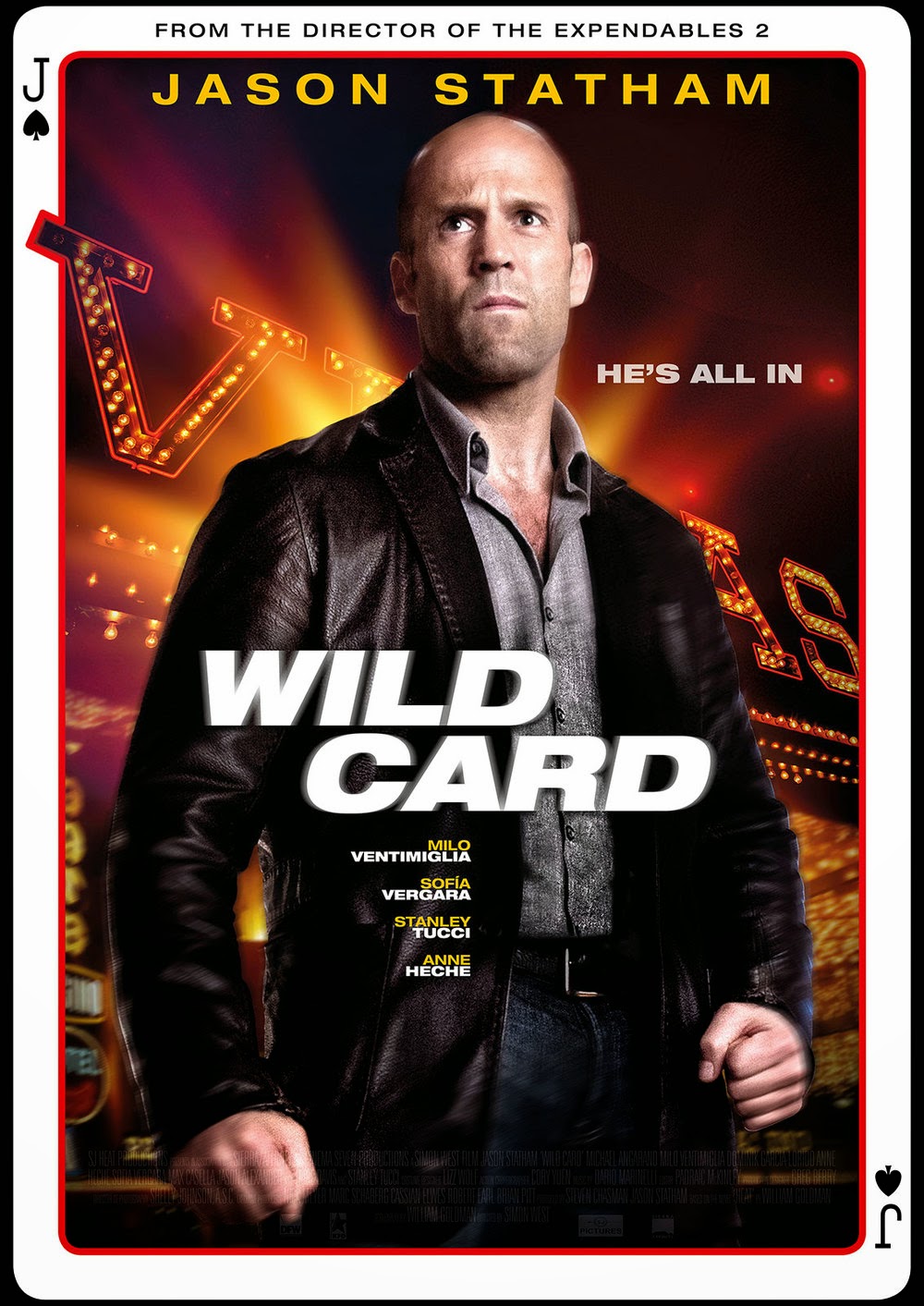 Nick: I can take care of things, that’s all you need to know.

Jason Statham has plenty of talent.  Best known as an English tough guy, Statham may not have what some want to call range, but he does know how to direct his energy and inherent charisma into different shades of somewhat similar performances (the dichotomy between The Transporter and Crank is a perfect example).  It is promising to learn that Statham took on Wild Card as a personal project, in which he could utilize the skills that he has, putting them into a character drama, which happens to have some action.  Unfortunately, too much of this film is dull and plodding, with some questionable performances, and a lack of cohesion, given what the film eventually amounts too. 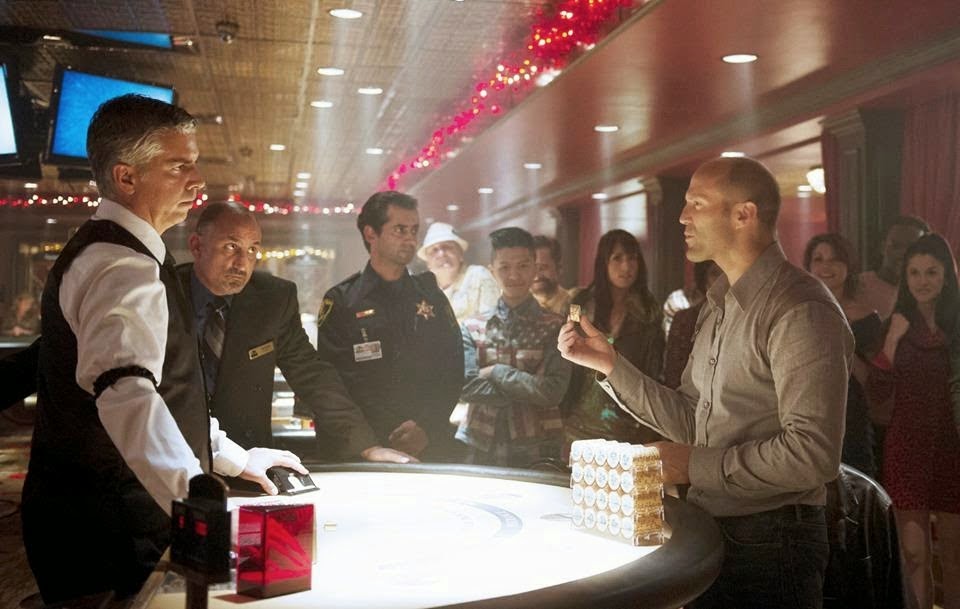 Originally based on a novel, Heat, by acclaimed writer William Goldman (who adapted his own book into a Burt Reynolds flop back in the 80s and once again for this one), Statham stars as Nick Wild, a tough guy for hire, who has an eventful week in Las Vegas.  Following a cold open that sets up a loose understanding of who this man is, Wild is recruited by two people.  One is Cyrus Kinnick (Michael Angarano), a young billionaire who is looking for some muscle to help him out with a night of gambling.  The other is Holly (Dominik Garcia-Lorido), a young prostitute who needs her friend Nick to help her get justice on a man (Milo Ventimiglia) who beat her up.  All Nick wants to do is get away from it all, which hopefully means making a nice sum of cash and driving the hell out of town.  Of course, there is also the issue of Nick’s gambling problem…

So here’s the thing, adding a gambling problem in this film seemingly comes out of nowhere.  Given that I came into this film knowing nothing about it, it was actually quite jarring to see that kind of turn.  It was almost as if a typical Statham tough guy movie was being made, only to have everyone see The Gambler remake coming out, with the sudden decision made to then uproot what they were going for and switch to another version of that, with more action.  That is not really the case, but given how this was a film adapted for the screen by Oscar-winner William Goldman, it feels like that bizarre reading of mine is just as appropriate as whatever actually did happen. 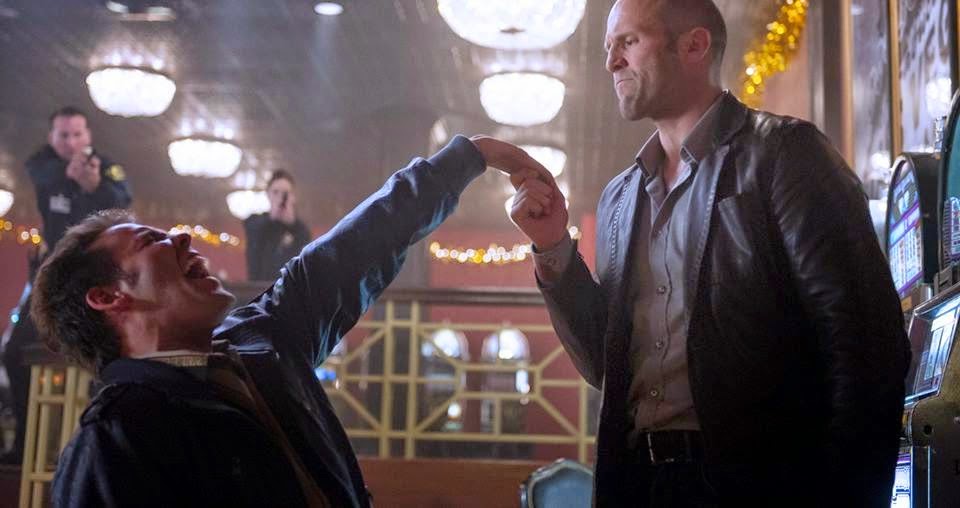 Perhaps it has to do with the abilities of Simon West as a director.  The man behind the goofy fun that was Con Air has not exactly helmed the best films since, but given that he is apparently good buddies with Statham (West directed The Mechanic and The Expendables 2), perhaps that natural rapport suggested the idea of putting something small, but accessible together.  That is not how things turned out though.  Even with some stylish moments and competent action scenes, the film’s character-based scenes are largely bland and not nearly as clever as the film treats them.

To his credit, Jason Statham is very good here.  He is not doing career-best work on an acting level (see: The Bank Job, Safe, Redemption), but he is putting in the effort to play a character with levels complexity.  Even the rest of the cast, save for Angarano (too awkward) and Garcia-Lorido (too stiff), are certainly game for having some fun.  The problem is the film’s execution of these supposedly important character scenes and the dialogue that goes with them. The way it is assembled, the slack in pace, the editing; nothing seems to come together, with a serious lack in momentum as Wild Card continually moves forward.  Honestly, a scene with Stanley Tucci is (clearly) the highlight of the film and gave me the impression that things were finally headed somewhere, only for the film to end 10 minutes later. 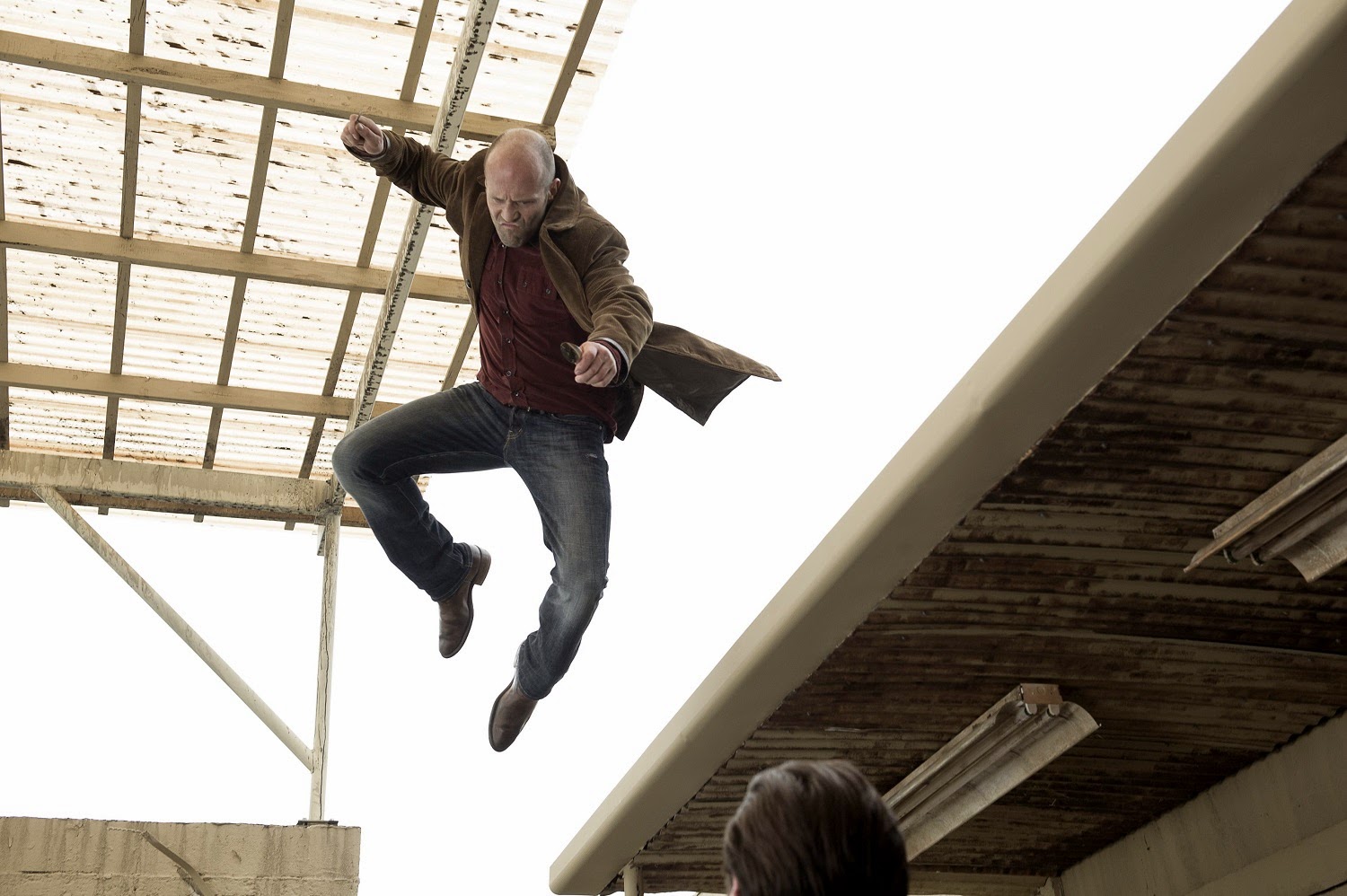 I did mention that Wild Card featured some action and it does.  These scenes are accomplished well enough, because action/stunt choreography by Corey Yuen will amount to cool scenes of Statham kicking ass, but it is not nearly enough to turn this into a good movie.  That in mind, I was not expecting much action and the only reason I bring it up is because the film highlights Yuen’s action direction in the opening credits.  This is a character study that Statham invested himself in (he’s one of the film’s producers), but the film just does not have enough going on, despite the presence of many supporting roles who all seemed to want to verbally spar with Statham at some point.

Wild Card is a misfire.  It has a lot of the right elements, but not enough is done to make it all that compelling to watch, save for some key scenes.  I wish I could have gotten more, especially given how involved Jason Statham is here, but it ultimately does not go anywhere.  Maybe in another world we could reshuffle and deal out a new hand, but this current version is not a winner.

Nick:  I don’t want any limit. 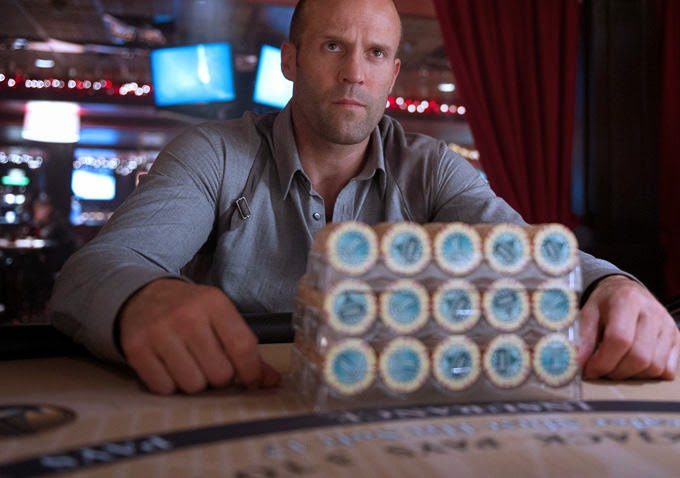 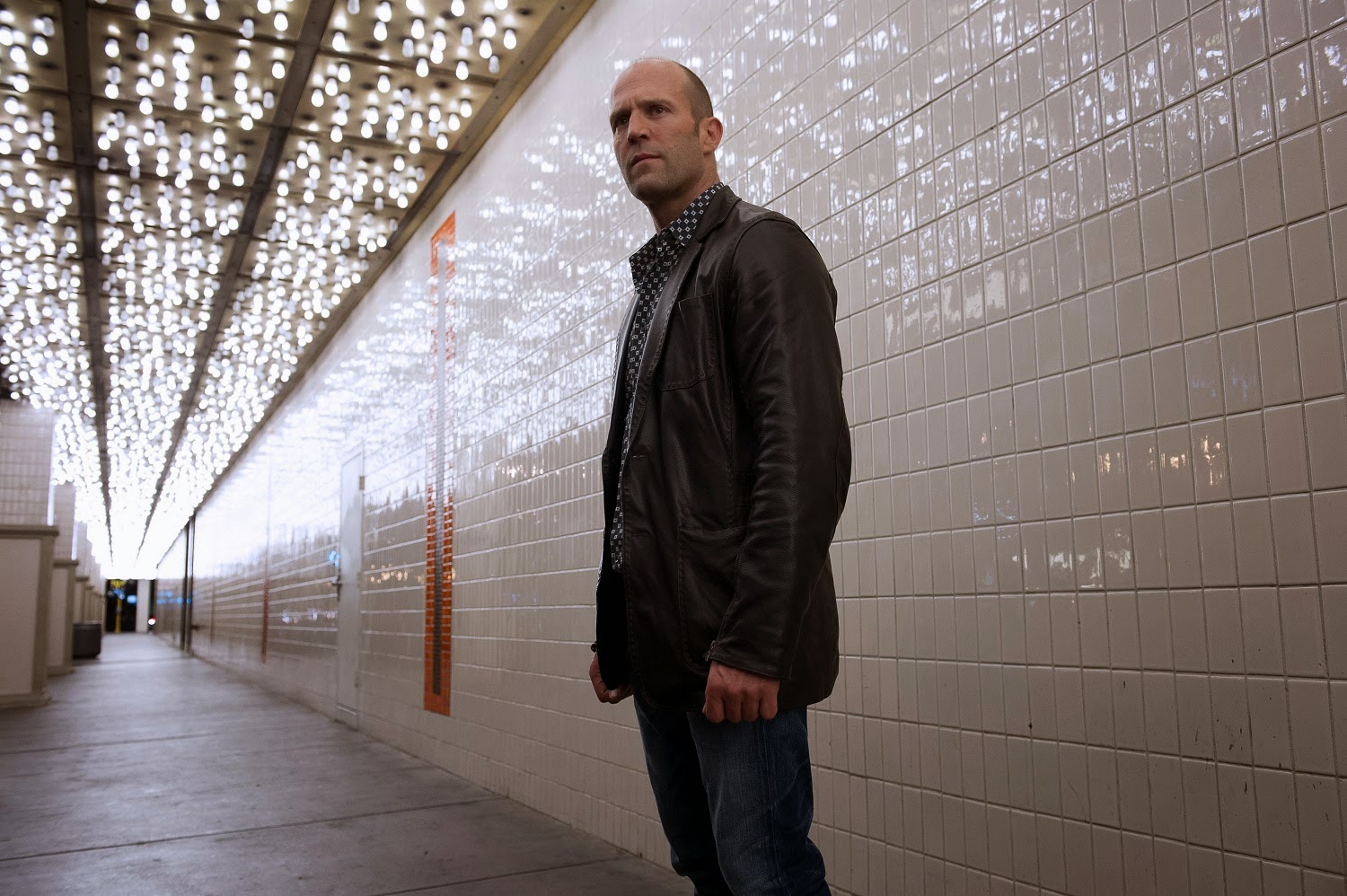 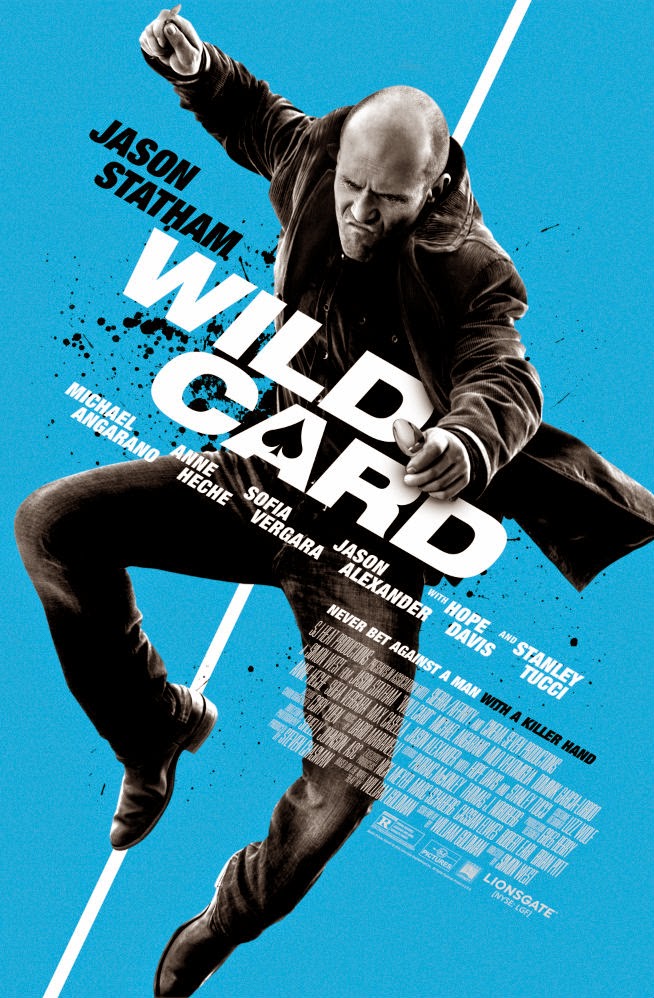