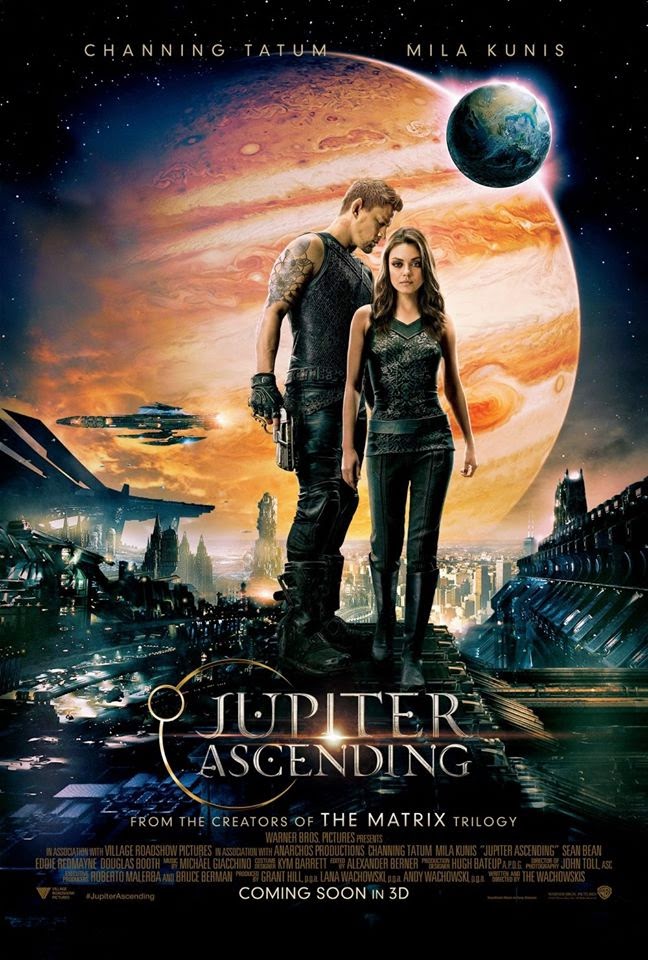 Caine:  It can be difficult for people from underdeveloped worlds to hear that their planet is not the only inhabited planet.

After months of speculation and curiosity, countered by delays and implied bad buzz, things have unfortunately not tipped in favor of Jupiter Ascending, the new, original sci-fi/fantasy film from the Wachowskis.  I really wanted to like this movie and all of the right elements are certainly there, given the fairly game cast, the production design, the visual effects, the score, and more.  Ultimately though, the general wonder and wackiness that comes with the ambitious world-building effort is not enough to help the chaotic story being told, which is both too repetitive and too impersonal to have garnered more connection to a film that tries really hard.  Even worse:  I can no longer say I have loved everything the Wachowskis have done.

Thinking back on what Jupiter Ascending was trying for, I really wanted to imagine what my younger self would have to say about a film like this.  As a person who has always loved Star Wars, for example, and continually wants to enjoy going all in on similarly fun types of films, I cannot deny making various comparisons from that series with that of this new property.  The thing is, Jupiter Ascending has less in common with the original Star Wars trilogy and more in common with the prequels.  Adding on to that further, as one who genuinely enjoys a lot about the prequels, what separates Jupiter Ascending from those films is the way they manage to still be enjoyable, even with the talk of trade embargos, tariffs, and what have you.  Say what one will about tricky political intrigue not being as inherently interesting as the force of the Galactic Empire versus a band of rebels, but at least all 6 (soon to be 7) Star Wars films have crazy lightsaber battles and space-based dogfights that provide a sense of stakes and excitement.  That is not so much the case with Caine Wise (Channing Tatum), a half-albino/half-wolf who surfs around on hover boots and repeats the same video game-inspired flip-kick move again and again.

And now I have said something about a character that sounds plenty intriguing, so I should continue.  Yes, this is a film where Channing Tatum plays a surfing wolf-man and is just one amongst the very many interesting-looking, other-worldly characters in this film.  The story revolves around the idea that Earth is actually more like a farm that will be harvested by powerful alien dynasties.  With the death of a matriarch, Earth has now become the center of a sibling rivalry between three spoiled, duplicitous children (including Oscar nominee Eddie Redmayne).  Problems arise and everyone throws their hands in the air upon learning of the existence of Jupiter Jones (Mila Kunis), a lowly, Earth-born janitor who is actually royalty and the true heir to Earth.  This is what leads to Channing Tatum’s Mog-like character (half man, half dog, he is his own best friend) to track down Jupiter and attempt to keep her safe. 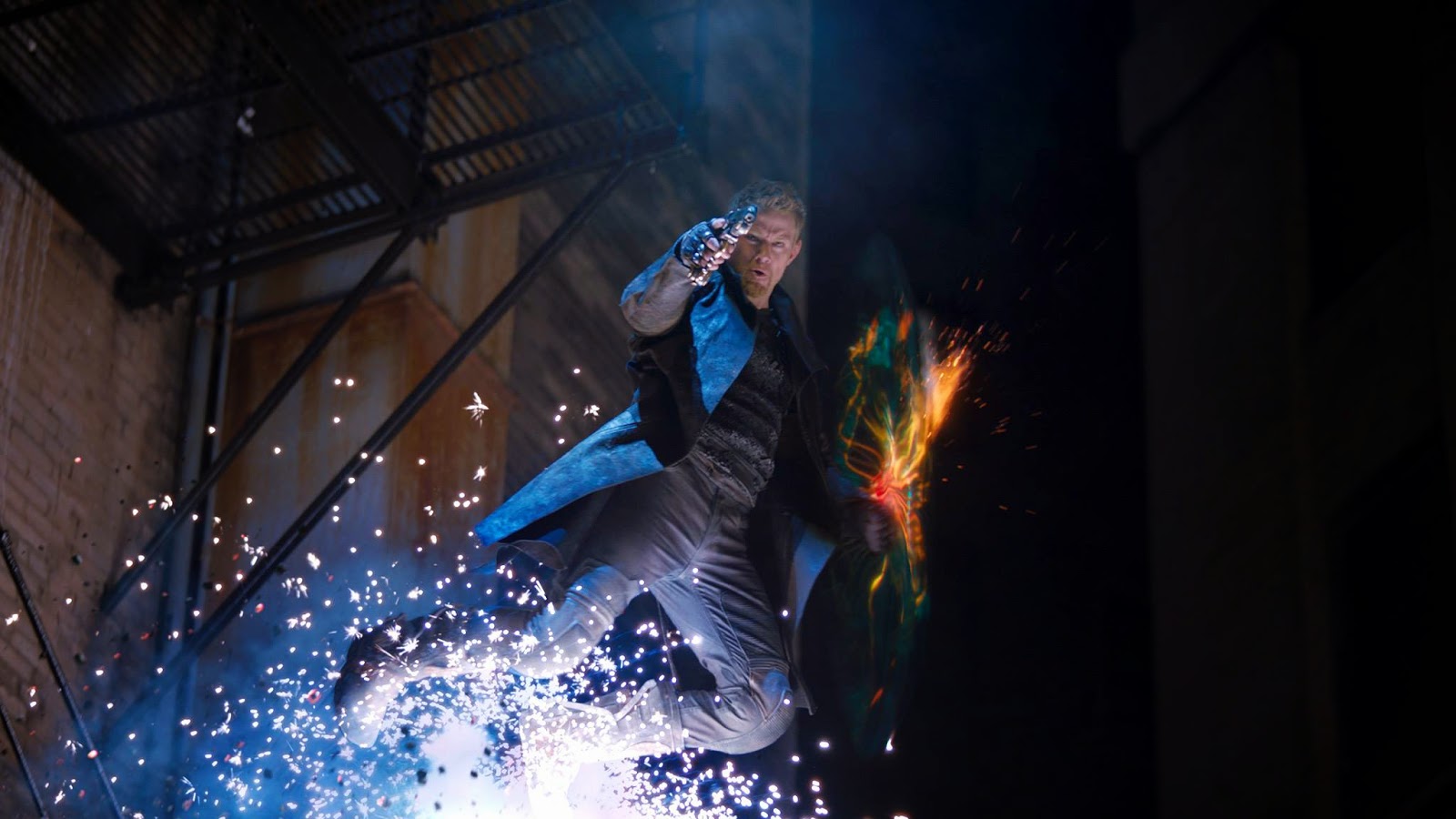 Explaining all that is a good way to keep everything straight and while I did not know any of this going in, I can only hope that people that do see this film get a better idea of what is going on, as the film is going on, as it could only make things more interesting to feel invested in the story for reasons that extend beyond just finding a lot of joy in the visual spectacle of it all.  The strange thing is that I have never really had much of an issue following the narratives of other Wachowski films, as seemingly convoluted as they may be.  I like the mumbo jumbo being spouted in The Matrix trilogy, I adore the blending of family melodrama with corporate espionage in Speed Racer, and Cloud Atlas is a beast of a narrative that had me completely invested.  Jupiter Ascending, on the other hand, takes a repetitive structure (Jupiter is basically kidnapped and rescued throughout the film) and then overcomplicates things with all sorts of talk about dynasties and what will make for the best profit margins.

Given that I am not particularly excited by the stakes involving Eddie Redmayne’s villainous character’s profit margins, the hope would then be that the directors behind The Matrix films would then at least be able to deliver tremendous visuals and really exciting action sequences.  Unfortunately, they only get half of that done.  Looking at this film (and listening to it, with a wonderful score by Michael Giacchino), it is very clear that the money is all on screen.  This is a big budget epic and it is certainly made to feel that way.  The mix of practical and CG effects is pretty remarkable, the costumes are great, and I am sure there is so much more going in various single frames of this film that is not even apparent until one goes back and pauses it or dives into the special features on the eventual Blu-ray.  It is the action that leaves much to be desired. 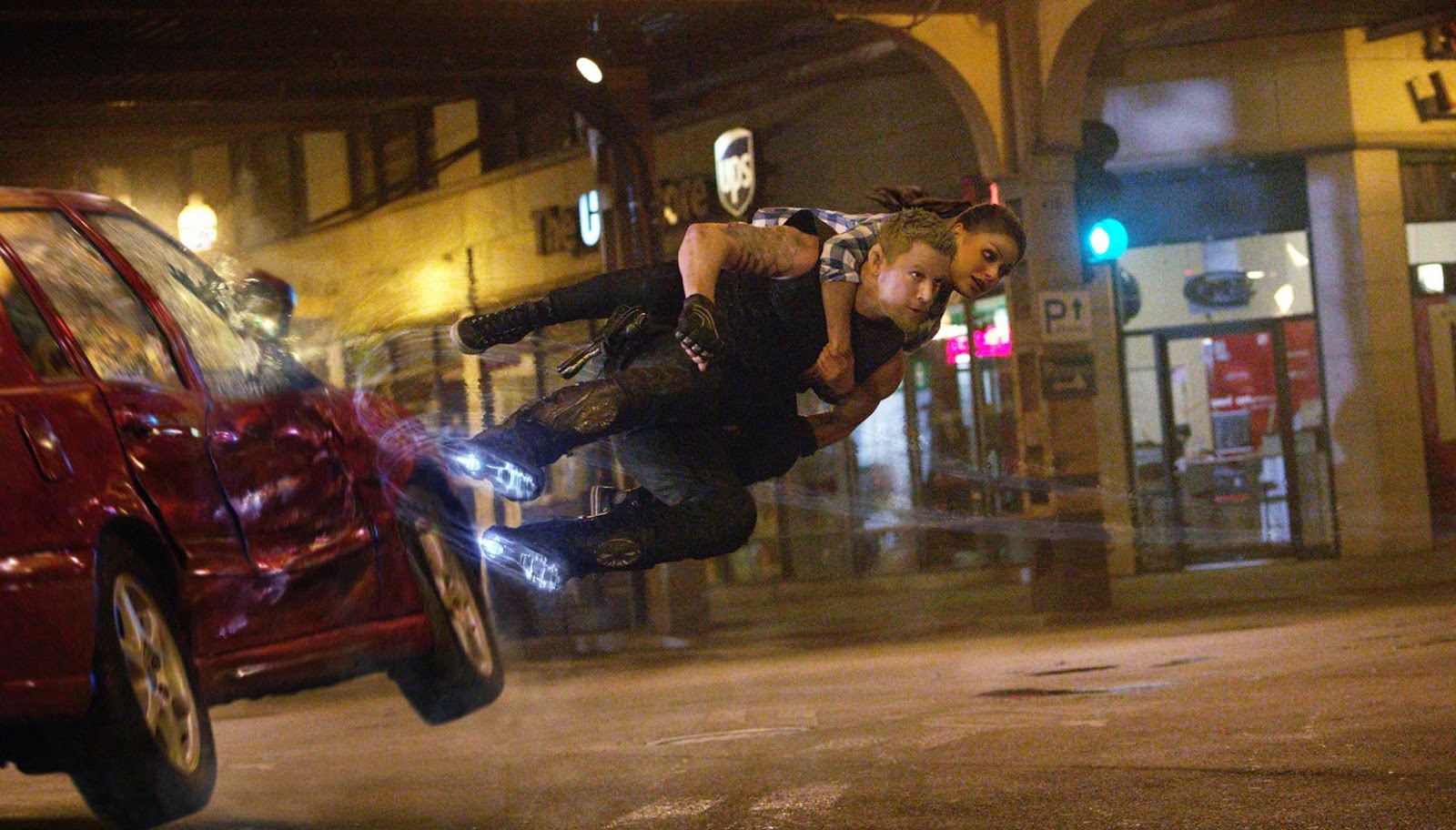 There is one great action sequence, which comes early on and is set on Earth.  Wolf-man Tatum sky surfs around Chicago, with Jupiter clinging to his back, as a team of evil aliens go after him; laser blasts flying everywhere, the score providing all the right kinds of propulsion.  It looks great and is quite exciting.  It’s also the only memorable action scene.  A lot of action takes place in this film, but it is all far less engaging than this early scene, which is unfortunate.  I believe a lot of it has to do with not taking the stakes of this film all that seriously, but it also feels as if the Wachowskis and their crew somehow ran out of ways to create a sense of variety and wonder in a film that involves laser blasters, hover boots, and dragon creatures.  It all ends up feeling very familiar instead, which is a shame, given how much I (again) really wanted to like this movie.

With a story that was not as exciting as I hoped and action that was not as engaging as it could have been, it leaves me with little to recommend, in terms of overall thoughts on the film.  Still, this is a visually marvelous film in terms of presenting its audience with whole new worlds, a sense of the technology, architecture, characters, and other designs.  The actors are mostly fine, with Eddie Redmayne clearly going for the ‘Most Acting’ award, while Tatum and Kunis have fairly relaxed chemistry together.  The film also allows for plenty of potential for sequels.  I mention this because even though the film does not work, overall, I would rather encourage more people to see something big and original like this than not, make up their own minds, and ideally give way to more original voices attempting to carve out something new, when given the big bucks to play around with.  Jupiter Ascending won’t change the planet, but it was an ambitious attempt and crazy enough to almost work. 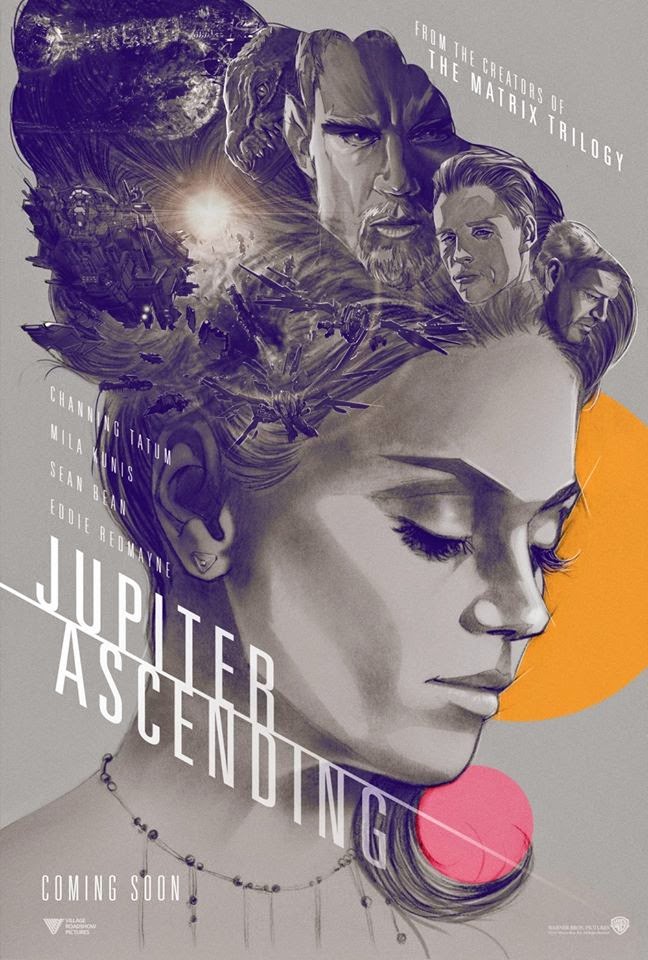