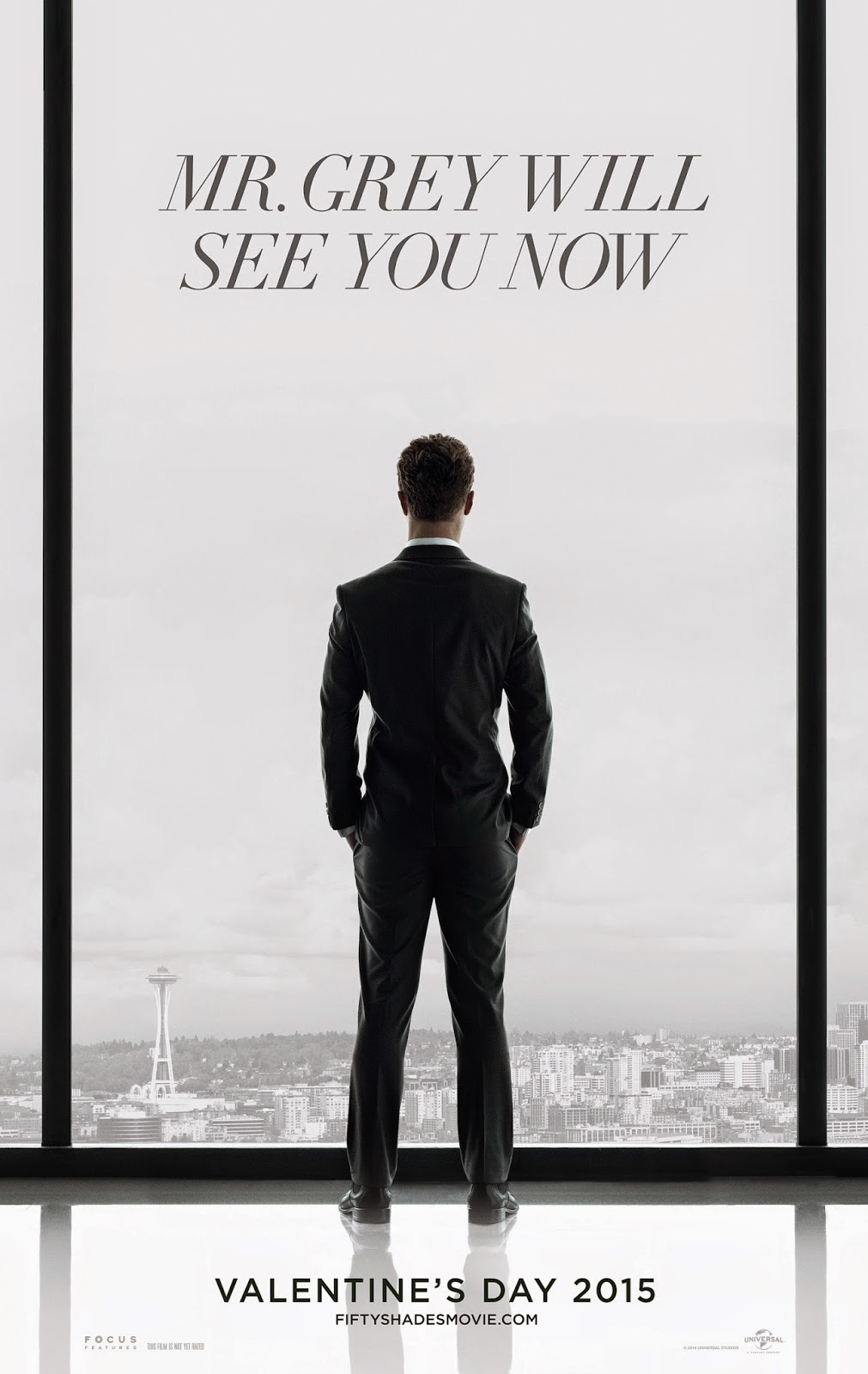 Kate: What was he like?
Anastasia: He was polite, intense, smart.  Really intimidating.

Fifty Shades of Grey is one of those movies that will end up being credited more for the hype around it than what is actually seen in the film.  This is a film based on the first book in a trilogy of bestselling erotic romance novels that seemingly aspires to be placed in the same territory as something like Sex, Lies, and Videotape or Body Heat, but is far too bland in execution, which seems like the presumed result of Twilight fan-fiction come-to-life.  I imagine there could be plenty to say about a potential blockbuster film based on a novel by a woman (E.L. James), adapted by a woman (Kelly Marcel), directed by a woman (Sam Taylor-Johnson), and featuring a female lead (Dakota Johnson) who takes charge on a man who masks his inadequacies with a certain kind of appearance and use of dominance behind closed doors, but it comes more from what the viewer ultimately needs to extrapolate from the film, rather having a film that more effectively conveys proper purpose in a story like this.  The only caveat I can provide at this early stage is that I have not read the book, but I doubt the many giggling women at my screening have read it either.

That is not an attempt to malign the audience for this film in some way, but it does speak to what the ultimate goal of this film may be.  While I am not blind to the reputation Fifty Shades of Grey, the novel, has in regards to its content, I was unaware of what the actual premise was.  Now having seen the film, it is quite clear that whatever deeper and more explicit descriptions took place in the novel have been heavily dialed down for the film.  That is not at all unexpected, as this is a Universal Pictures release, but having to tell and not show could have allowed the film to be more flirtatious and exciting with its dialogue and performances.  Instead, non-subtle implication is everywhere, between the positioning of characters relative to the camera angles, to the use of music, and down to the various forms of double-speak we hear.  Keeping all of that in mind, this is what brings me back to what the audience expectation is, versus the original intent of this story.

To its credit, there is material here to make for an interesting character study, which is only masked by the level of sexuality on display.  That being said, there are more effective films that have managed to balance its use of characters and how they interact with the level of sensuality and sexuality (intense or otherwise).  Of all films I could reference, Magic Mike is one that comes to mind, as the audience attending is essentially the same (minus many of the folks who came to see a Steven Soderbergh film).  While not brilliant (which many would argue), that film has the content that leads to the wild reactions from its audience, while also serving as a story full of humor and drama focused on the lead characters involved, and even has a way of commenting on the economic state of society at the time, given Mike’s entrepreneurial endeavors and future plans.  Aside from a strong performance from Dakota Johnson, Fifty Shades of Grey comes up lacking any real form of engagement, aside from the audiences who spent money purely on having the chance to see sexuality portrayed on the big screen up to a point, given the limits a major studio has in what they can show.  Sure, Magic Mike may have advertised only so much, in terms of knowing what audience it was pulling in (though, again, Soderbergh fans likely knew of the ‘something more’ that would also take place), but the film still benefited from having more to offer than just male strip shows.  Fifty Shades of Grey does not have more and is really just trying to sell one thing.

But maybe all of this matters little.  Perhaps there are those that really just want some sort of titillating experience that has the same sort of appeal to a select type of audience as superhero films have to comic geeks, or (given how that is a broad and expanding audience) horror films have to genre fans.  The question then becomes, “Is Fifty Shades of Grey trashy enough to be worth that audience’s time?”  Not really is my answer, as the film has some pretty easily identifiable flaws.  One has to do with the tone of the film during its ‘signature’ scenes, which is too serious to make for anything resembling much eroticism and too focused on the female form, which seems to defy the logic of having a bunch of woman lining up to see a hunky guy in action.  Another key flaw is the characters.  This is the story of a soon-to-be graduated college student, Anastasia Steel (Dakota Johnson), meeting the wealthy, handsome, and intense Christian Grey (Jamie Dornan) for an interview.  There is an immediate attraction, which leads to Mr. Grey developing a sort of pact with Anastasia that they will be together, but she has to go along with his dark, sexual tastes.  Somewhat humorously, a lot of paperwork is involved for this, but unfortunately, only Johnson seems involved, as far as the humans in this story go.

I am not familiar with Jamie Dornan as an actor, but he seems to be playing Christian Grey in a way that resembles a robotic drone from the same office that American Psycho’s Patrick Bateman works in.  The line readings and dialogue is often laughable in delivery, which may or may not be intentional, but the lack of chemistry is certainly more noticeable.  There is one scene where these two connect.  It has nothing to do with physical sexuality, but a contract negotiation of all things.  It is the one time the writing and performances seem to match up, but given the character, it seems like it would not be much of a difference if any straight laced character was forced to bounce lines off of Anastasia at that point.  I say all of this, because one can plainly see that more has yet to be developed, but it is not at all unapparent what is going on with Mr. Grey in some sense.  The film is simply choosing to not reveal things until a later time, which can make for a frustrating viewing experience, if I already feel steps ahead of everyone in this story.

What I am left with is a film that struggles to make any of its characters interesting, has little else to present in terms of topical content or even engaging forms of sexual content, as far as skillful direction is concerned, and a lack of a more playful screenplay.  Basically, Fifty Shades of Grey is rather boring.  The laughter that stems from both the rowdy crowd that came to see R-rated, studio approved sex scenes and those who are nervous around this kind of content may feel like they were satisfied, but I was left not caring much about any of it.  If one wants to see passion, head somewhere that did not need a hype machine to bring you.

Christian: What is it about elevators?