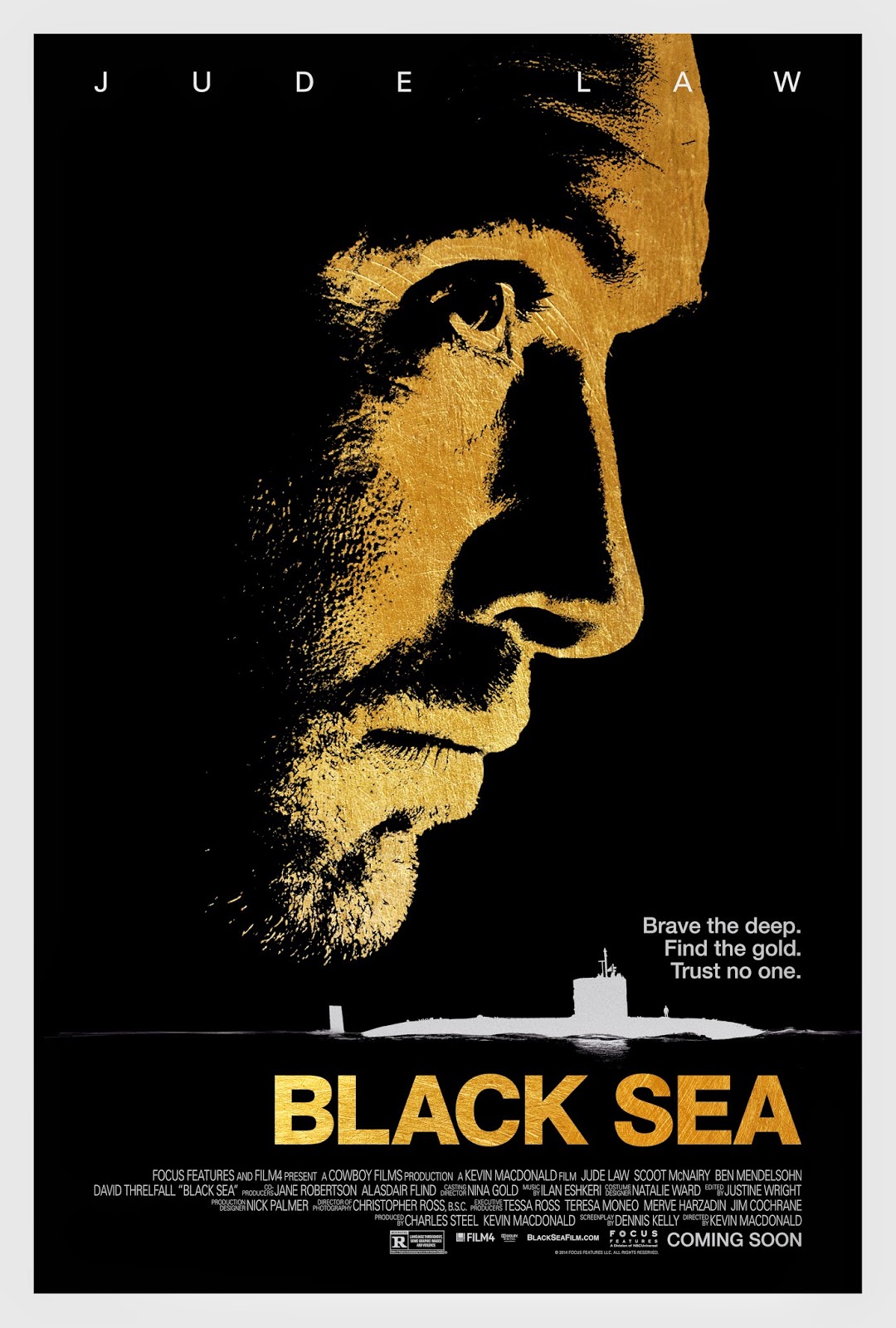 Robinson: I’ve been working on submarines for nearly 30 years.  I lost my family to this job.

There was a time when I used to say I was not a fan of submarine movies.  I have since found that to be inaccurate, given how much I appreciate the ones considered to be the best and even some of the more average attempts.  I believe it to come down more to whether or not the film is effective in getting across the key idea of what works best in a submarine movie, which is effectively building the claustrophobic tension that comes from having multiple characters stuck with each other in a narrow enclosure, deep below the ocean’s surface.  Black Sea manages to do this.  It takes the premise of a heist film and combines that with what you can get from a submarine thriller, making for a unique sort of drama held together by some solid performances and an interesting play on what these characters actually desire most. 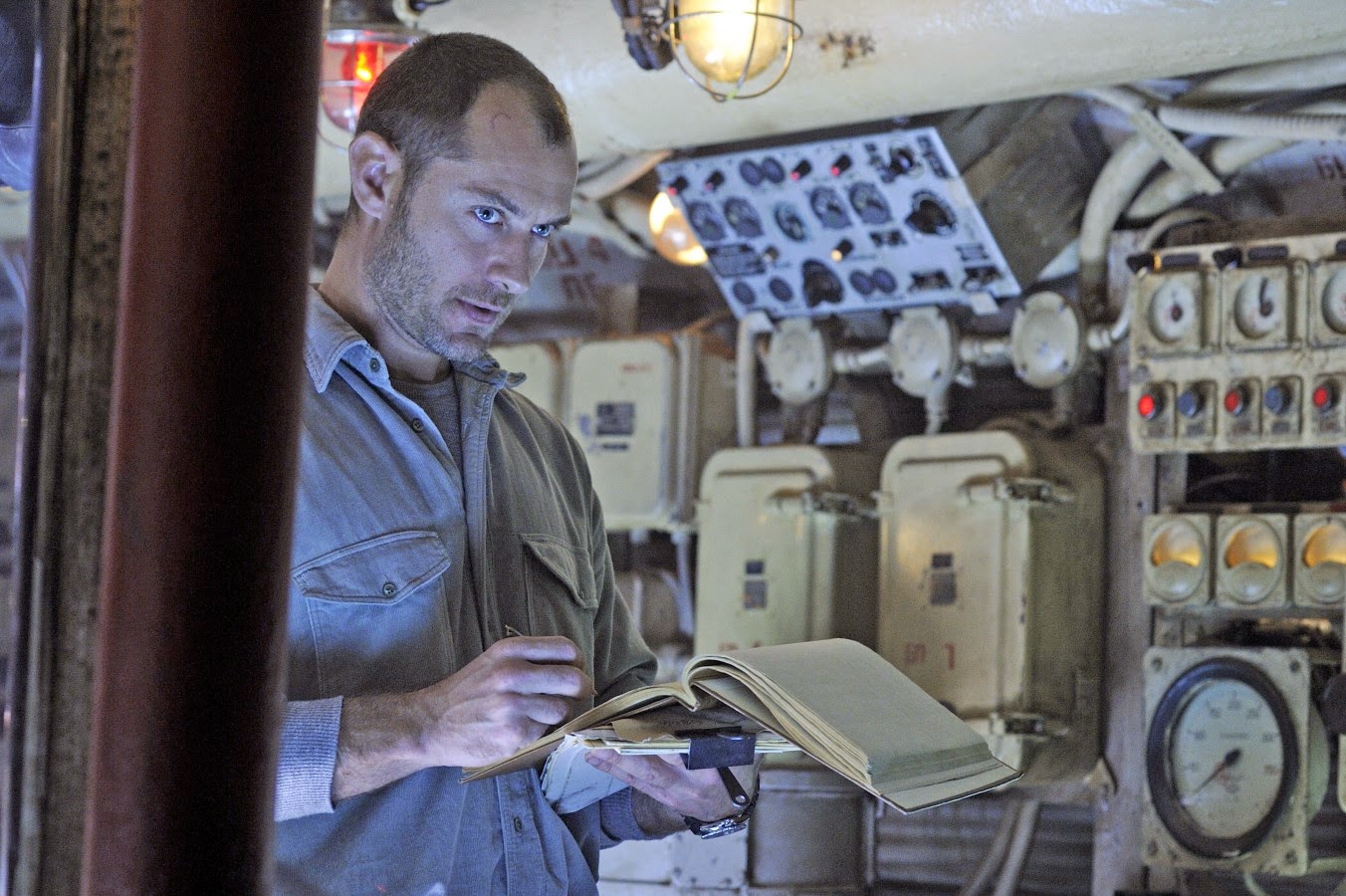 Part of the fun comes from realizing how colorful and pulpy the basic plotting is, despite the serious nature of the characters involved.  Here we have a film that features a submarine captain, Robinson (Jude Law), taking on a job that involves recovering lost Nazi gold from a sunken German U-Boat.  Right there, saying the phrase, “recovering lost Nazi gold,” already sounds like a fun adventure and the film does have a level of fun with this premise; it just happens to be buried under the guise of tense masculinity, stubbornness, and paranoia.  Robinson accepts the position to lead this job for reasons that go deeper than just making a lot of money, but he decides to select a team that consists of British and Russian men, with the addition of the American middleman (Scoot McNairy), who helped arrange this mission.

Having this set of men aboard the sub is what sets things down a dark path, as the two groups, while necessary to have, according to Robinson’s logic, quickly divide themselves, producing a lot of tension aboard the sub.  For the record, it is the Brits who have the harder time getting along, namely the character Fraser (Ben Mendelsohn), who is basically the source of the most trouble in this film.  Writer Dennis Kelly really does not do much to smooth out the script in this regard, as Mendelsohn, while good with what he is given, is essentially a constant troublemaker so the film can have various twists and turns take place.  I would imagine there is an implied backstory that should have us understanding why Fraser is the way he is, but the film is lean enough to only have us learn so much, which unfortunately does not amount to getting a better understanding over just seeing a bunch of men arguing, because of some poor choices at various points in the film. 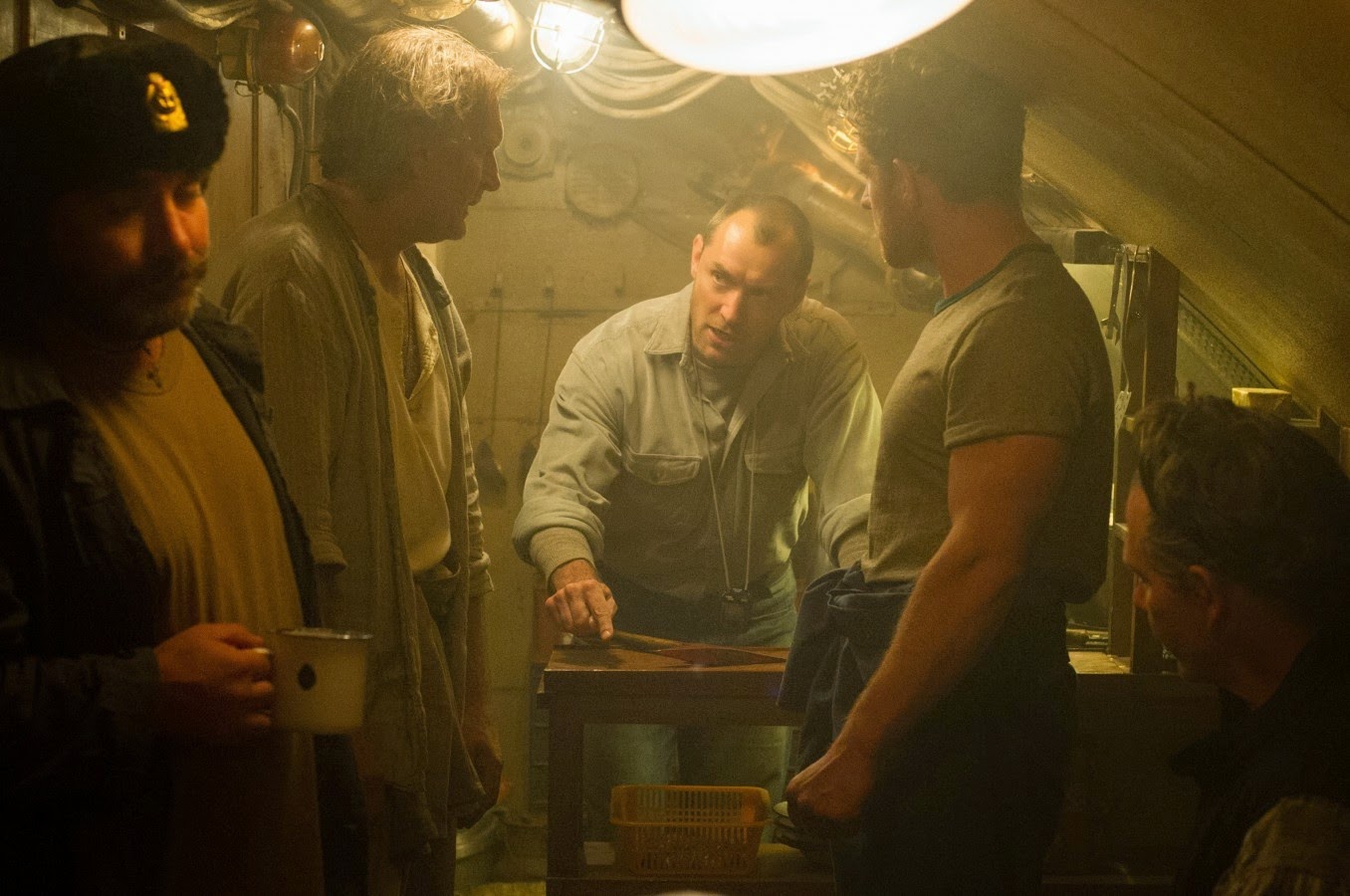 With that being said, if the film’s biggest issues stem from not having enough to help me understand why Black Sea eventually turns into an effectively tense thriller, that is a minor problem compared to what I do get, which is a taught cinematic exercise that looks at how far one will go in order to reach his desired goal on the basis of principal over greed.  That is what I see in Jude Law, who I found to be terrific in a role that requires him to use a particular accent (Aberdonian), while showing the conviction and obsession he has with sticking it to the man.  The film does a fine job with setting up who his Robinson character is, where he is coming from, and why he takes certain actions.

Jude Law is a performer I have been happy to admire for some time now and while this may not be the greatest film he has been a part of, he is very good at putting the character’s motivations on display through his expressions and little actions, as opposed to really hitting every theme on the head.  I would not go as far as to say Robinson is a character as rich and well-performed as Humphrey Bogart in The Treasure of the Sierra Madre, one of my favorite movies and one that has about as much influence on this film as Das Boot or The Enemy Below, but he is certainly a man you come to understand well enough, and are intrigued by when it comes to seeing where all of this leads.

Black Sea was directed by Kevin Macdonald, who has effectively gone back and forth between narrative-based dramas (The Last King of Scotland, State of Play) and documentaries (Touching the Void, Marley).  Being back in drama mode, he does a fine job of using the submarine setting and the various elements of a heist thriller to their fullest, both in the way he pits the characters against each other through cinematic means and in how he captures the feeling of isolation and distrust, given where these characters are and the constraints they have.  Being caught inside a submarine and adding on technical issues that could easily mean death if these men do not work together is a great way to keep one invested, especially with the added value of a golden prize for everyone involved (well, the survivors at least) at stake.  There is also a very tense and interesting sequence involving some of the men going outside of the sub, while it is deep underwater, which kept me very invested in how things would play out.

The film is a well-done exercise in dramatic tension.  While some narrative conveniences come in the form of actors yelling at each other for the sake of raising hostility and leading to some big turns in the film because of it, I was invested in this crew and whether or not they would both get the gold and survive.  The added value of Jude Law, along with some of the other performances, certainly does help (we get a Killing Them Softly reunion with Ben Mendelsohn and Scoot McNairy!); as does the directorial work of Kevin Macdonald, whose work I tend to quite enjoy.  Black Sea ends up being a unique sort of heist adventure, with a proper dramatic tone to make it all the more effective.  It may have some familiar elements, but matching up sub movie tension with a strong Jude Law performances is more than enough to make for an engaging film.

Daniels:  What happens when one of them figures out that their share gets bigger, when there are less people to share it with? 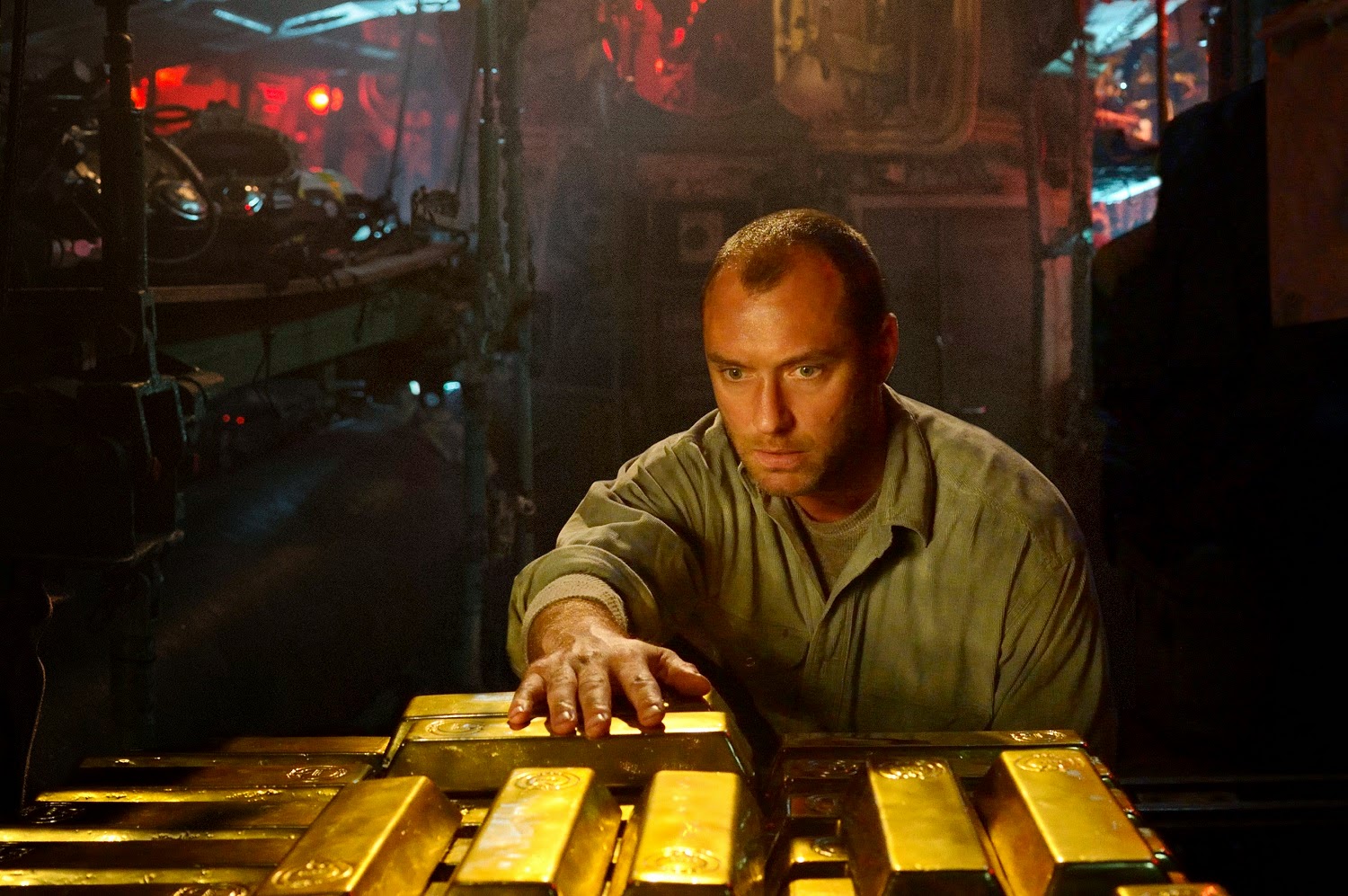 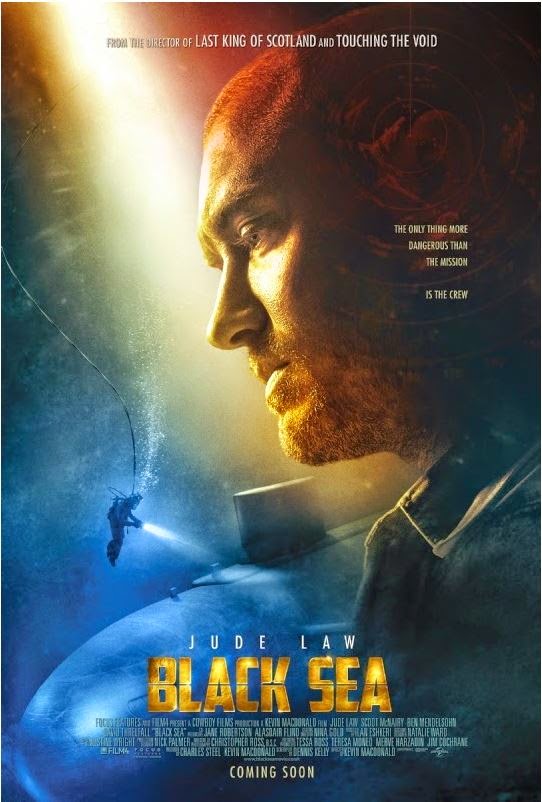