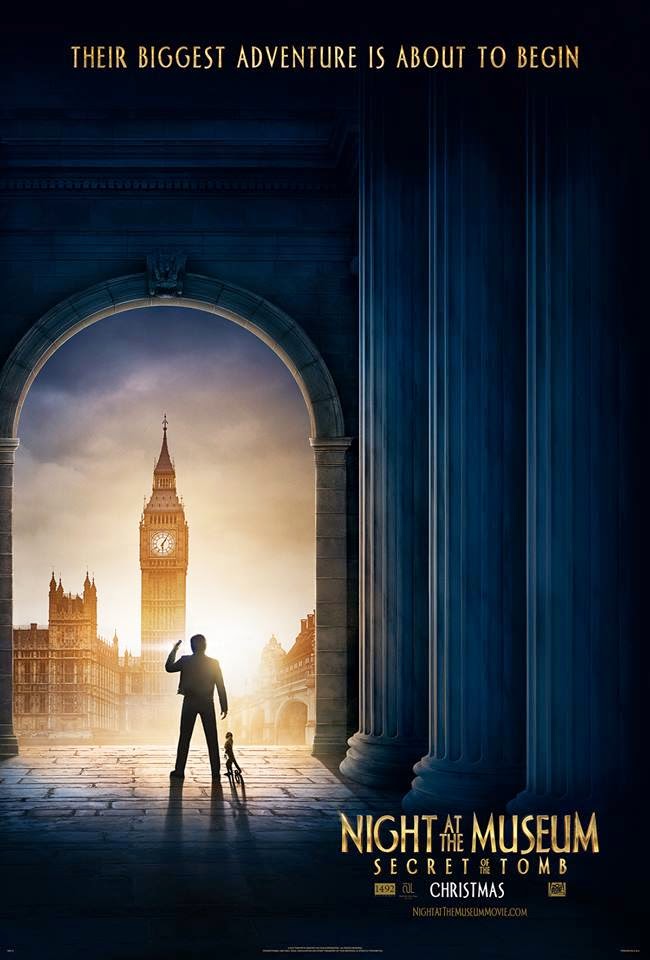 Night at the Museum: Secret of the Tomb: 3 out of 5

[shaking hands]
Lancelot:  Sir Lancelot, at your service.
Teddy Roosevelt: Theodore Roosevelt, President of the United States of America.
Lancelot: [excitedly friendly] I have no idea what that means.

I had fun with this film.  There is more to read, but how much do I really need to say about the third film in a series about Ben Stiller interacting with museum exhibits that come to life at night, thanks to the power of a magic tablet?  Okay, so maybe that sentence alone can be deconstructed plenty, given how absurd it may sound, but with that in mind, I cannot say the Night at the Museum franchise has been one I have been overly enthusiastic about, but I can say I’ve enjoyed the sequels more than the original film.  They are simple enough family comedies, featuring enough supporting performances going over-the-top in ways that make me smile to recommend them for what they are: harmless fun.  Given the sense of finality in this installment, a little extra something is added, but for the most part, Night at the Museum: Secret of the Tomb may not be the sequel everyone has been pining for, but it is an easy watch for the intended audience. 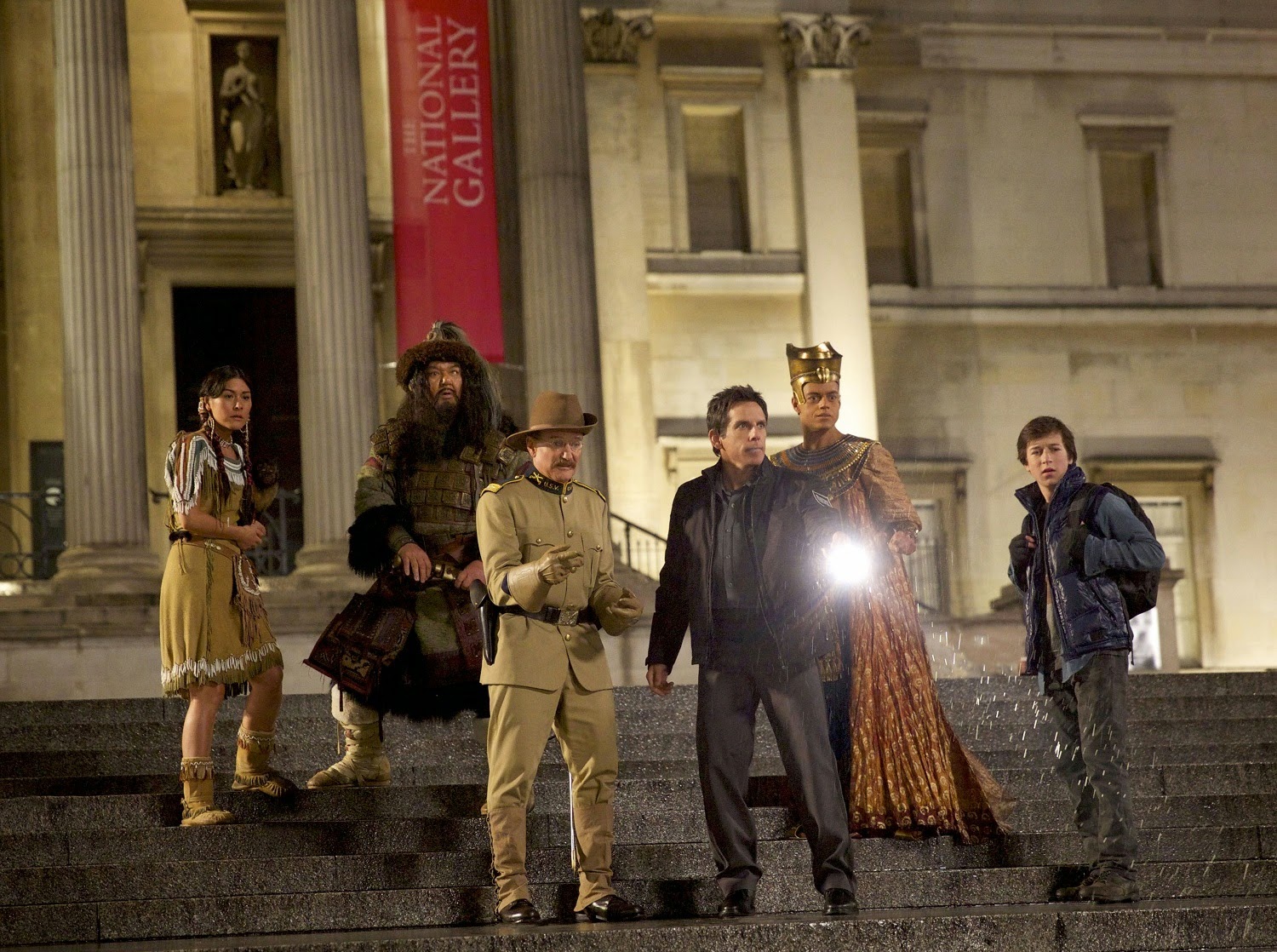 In the film, Ben Stiller returns once again as museum night guard Larry Daley.  Following a brief prologue that changes everything we know about the Night at the Museum franchise as we know it, setting up a possible dark, apocalyptic future if things don’t go a certain way! (not really), we learn that the tablet that brings the museum exhibits to life is losing its magic.  To solve this problem, Larry, his son Nicky (Skyler Gisondo), Theodore Roosevelt (Robin Williams), Ahkmenrah (Rami Malek), Jedidiah (Owen Wilson), Octavius (Steve Coogan), Attila the Hun (Patrick Gallagher), Sacagawea (Mizuo Peck), a Neanderthal named Laa (also Stiller), and of course Dexter, the monkey, all head to London in an attempt to find Ahkmenrah’s father (Ben Kinglsey), who knows the secret to restoring the tablet’s magic.

The film wastes very little time getting to the one night that matters, even if it means setting up very little to make the presence of most of these other figures make much sense from a standpoint not revolving around the comedic hijinks that take place.  That in mind, I appreciated the Battle of the Smithsonian for similar reasons.  I was not a big fan of the first film, but what I liked about the sequel was the sense of urgency that came with its plotting.  The Secret of the Tomb has that similar concept of focusing on one main night and not slowing down too much as it goes on.  For that reason, every joke, regardless of how effective it was, came fast and moved on to the next joke just as quickly.  I like that.  That is all I really need in a film like this and it worked. 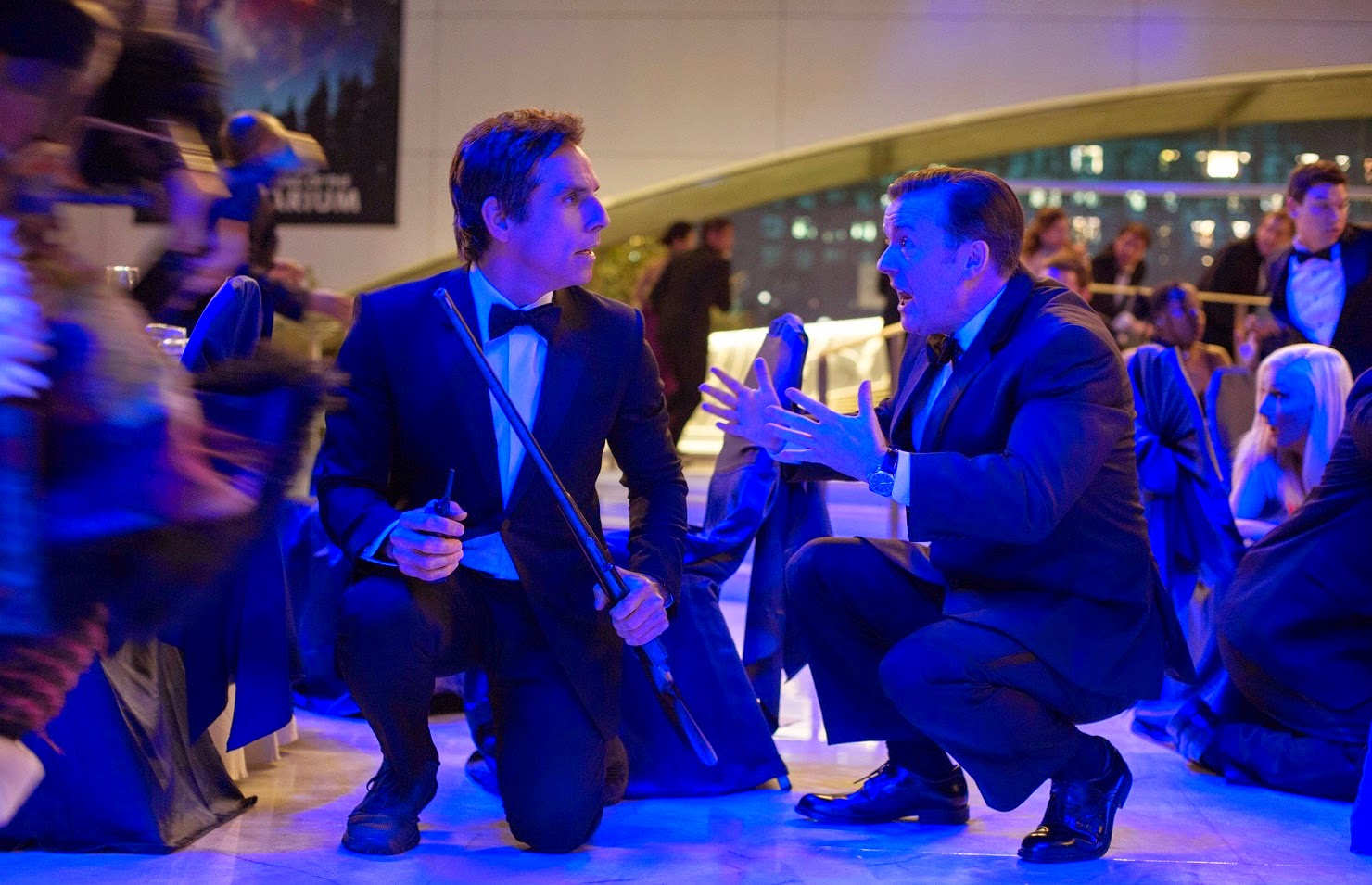 Still, this film does try to bring too much of some elements.  I don’t know how much comedic fodder I could take out of seeing Dexter the monkey peeing on things, but at the same time, it is times like those where I thank Fox for not making director Shawn Levy convert this film into 3D.  Putting those broader, ickier moments to the side however, this film did have some neat ideas.  Like the last film, which jumped inside of a painting at one point, this film has a moment like that as well that is quite clever and fun.  There are also some neat takes on how to bring certain museum exhibits to life in general, such as various statues and the constellations.

With all of this you get a fun cast.  The previous film benefited from Amy Adams as Amelia Earhart (who was better than Hillary Swank in Amelia from that same year) and Hank Azaria’s evil pharaoh character, which were enough to make me smile and look past the shortcomings of that film.  This film has all the key players back and some newcomers.  Downton Abbey’s Dan Stevens shows up as one of the surprising wild cards in this film as Sir Lancelot, a knight who does not realize that he is not real.  Rebel Wilson also enters the film as a security guard at the British museum and she brings what people generally like about her comedic performances.  The returning cast is fun as well, with the continued dynamic between Wilson and Coogan serving for some easy laughs, and welcome expanded roles for Robin Williams and Rickey Gervais, given how active they seemed to be this time around. 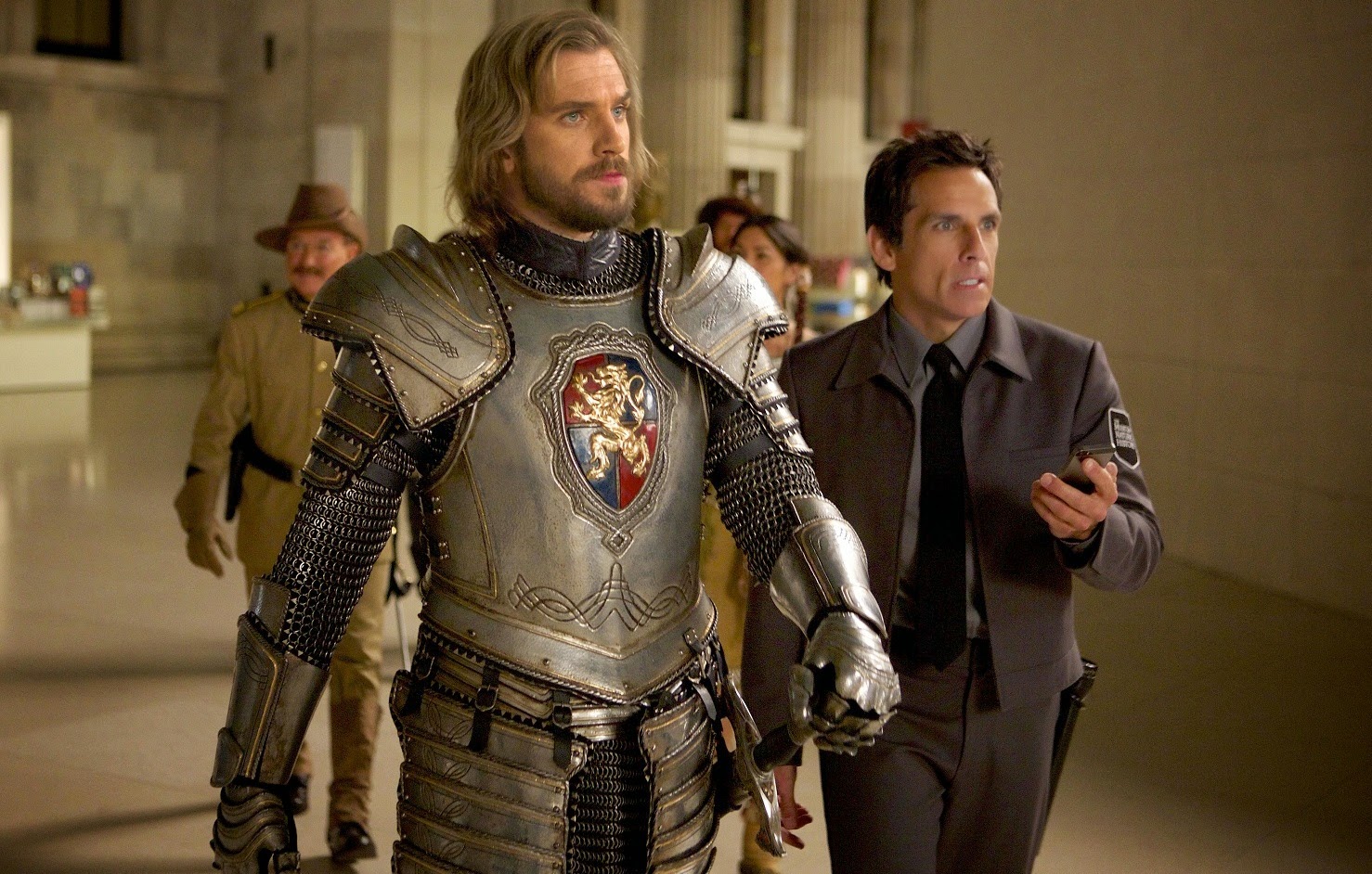 Of course, going over all of these cast members, the core of this film really surrounds Larry and where he is in his life.  He has been doing this museum thing for many years at this point and is now looking at what is going on with his son as well as with where things may take him in his continued role as a father and a man who kind of just fell into his current position.  It is with these notions that the film attempts to find ways to conclude the series, which is pretty straightforward and handled in a manner that can elicit emotion from many pretty simply, but I admire the film for going in that direction.  Given that I did not really need three of these movies, the fact that I was a little caught up in what was going on in this supposed final chapter is at least a small triumph, so kudos.

Night at the Museum: Secret of the Tomb is the kind of family feature that will get sucked into this holiday season’s shuffle and likely do decent business.  It is nothing special, but it is entertaining enough to keep an audience happy, without having to do too much pandering in the process.  I had enough fun with it, which came from the cast (including a couple really fun cameos) and some of the inventiveness mixed with the frantic pacing to keep it all moving.  Not a holiday classic, but a decent entry into a series I am okay with.

Larry: These guys depend on me. 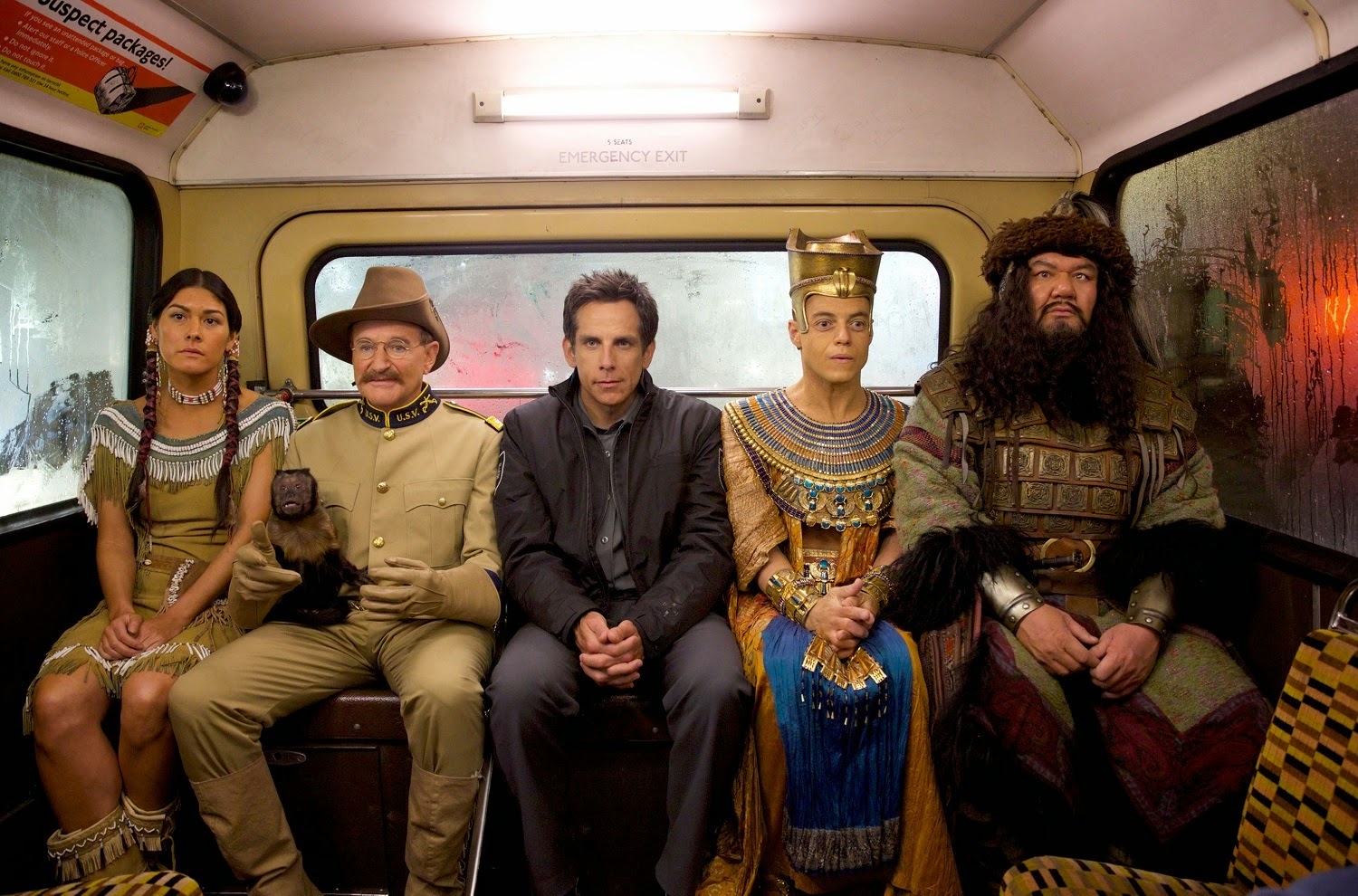 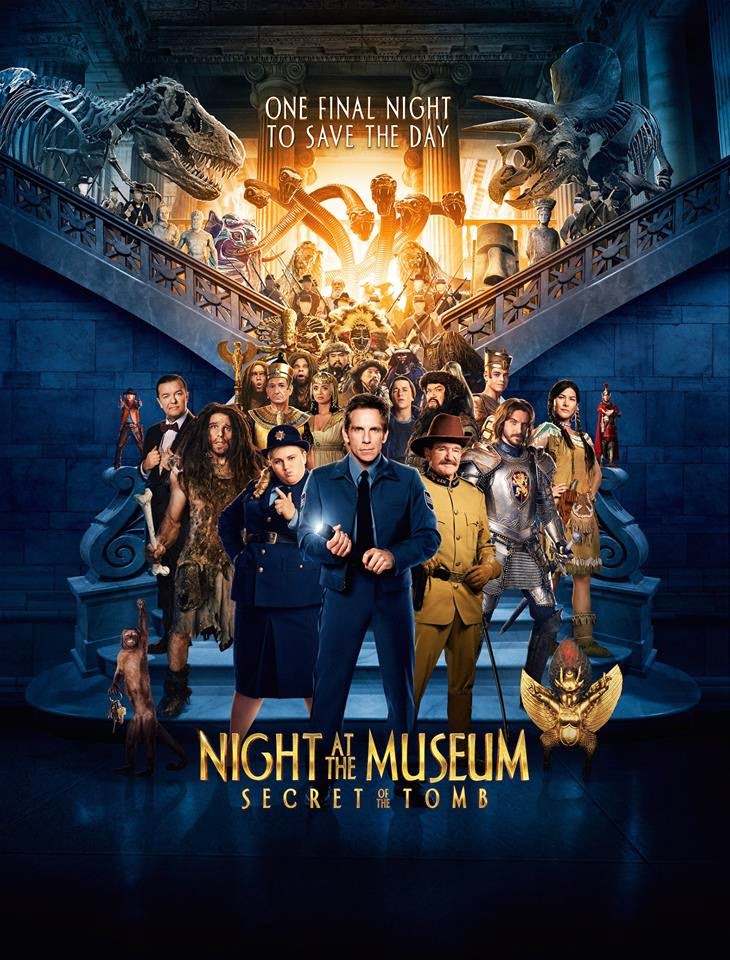