‘Dumb and Dumber To’ Too Much (Movie Review) 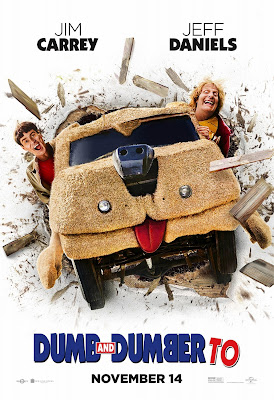 So I didn’t laugh all that much.  It is irritating to have to be on the defensive for an opinion of a film that really does not need critical weight to determine if someone wants to see it or not.  If I was not writing film reviews, I would have still no doubt seen Dumb and Dumber To, because I like the first one, I like the actors, I like the Farrelly Brothers, and I would be happy to embrace my curiosity on this thing.  As it turns out, I did not like this movie.  It is a mix of dialing up the antics and raunchiness, as any comedy sequel would be prone to do, while also relying on rehashes of what was believed to make the first film work.  This results in a film that is a little meaner (odd for the generally sweet Farrellys) and lot less funny.  Sure it is subjective and I have no shame in saying that I laughed a good few times, but overall, it mostly fell flat. 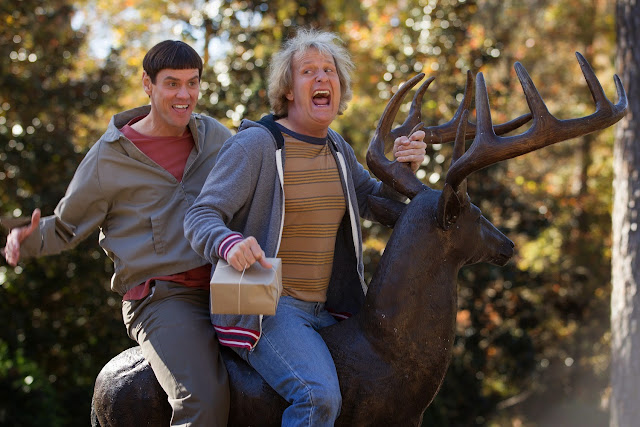 For those in need of a brief recap, this sequel to the 1994 comedy hit finds Jim Carrey and Jeff Daniels back together again as Lloyd and Harry.  Some brief attempts are made to poke fun at the fact that 20 years have passed and the guys are older, but nothing has essentially changed.  Following the opening minutes, which return the guys to status quo, a similar plot to the first film gets underway.  It revolves around Harry and Lloyd going on a road trip together in an effort to deliver something important to the girl of Lloyd’s dreams, all the while, a nefarious set of characters are also out to kill them.

If it sounds familiar, it is because it is.  While some comedy sequels know how to change things up the second time around (Addams Family Values), others are content to do the thing that worked the first time around (The Hangover: Part II), and others somehow do that same thing, but openly acknowledge it, making it somewhat better (22 Jump Street).  Dumb and Dumber To falls into the trap of retelling the same story, but it is not the plot that is bothersome.  Honestly, I don’t feel like I would be giving this film a fair shake if I were to criticize it just for having a similar plot.  It comes down to what I want from a film like this, and what I wanted was laughs. 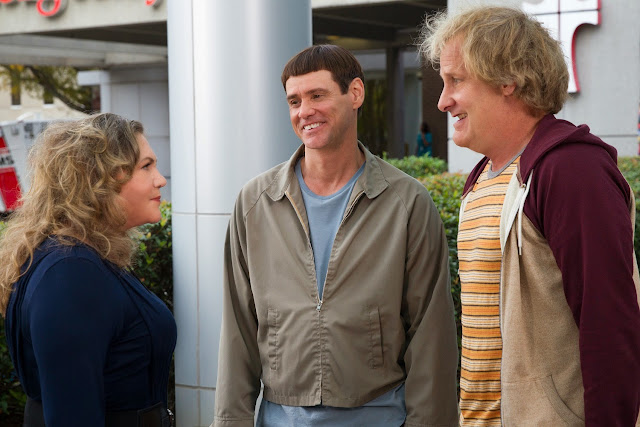 To back up, I am a big Farrelly Brothers fan.  I consider Kingpin and There’s Something About Mary to be two of my favorite comedies of the 90s.  I have varying amounts of appreciation for their films that followed, but even when I don’t find them to be laugh riots, I love the way they essentially put forth films full of sentiment and nice messages (along with their immense respect for the disabled).  This is why the original Dumb and Dumber is sort of an outlier in their catalogue.  While the main takeaway, beyond the gags, is the sense of eternal brotherly love, it is not nearly as sweet a film as the rest of the Farrelly’s features.  Now that we have a sequel, it is like watching more of that thing that worked so well the first time, because it came as a sort of surprise dare that worked, but now with the flame having gone out near completely.

Dumb and Dumber To is not without moments though and the cast is certainly game.  Jim Carrey is, like it or not, in the same sort of prime form that made him a star back in 1994, when he had Ace Ventura, The Mask, and Dumb and Dumber all breakout.  In this film, he is back to the absurdist goofball that tries to zing out jokes as fast as he can at all moments.  Jeff Daniels is not falling short either, as he attempts to mine at ton out of what works for him in this kind of film.  The guys clearly like having fun together, as the first half of the film is basically these guys riffing with each other.  That said, I think I actually liked seeing them separately a little more than together, as far as my tolerance for aspects of this film goes. 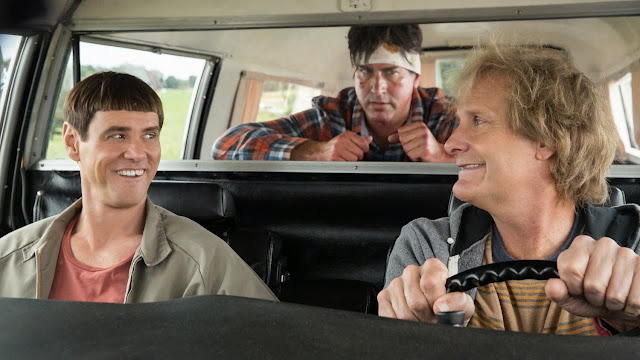 Along with Daniels and Carrey (who I must emphasize, really do look their age, but are still willing to go all in), the film is also populated by Rob Riggle, Laurie Holden, Rachel Melvin (who is delightfully doofy as well), and a very game Kathleen Turner.  The film may bring back a lot of fan favorite elements from the first film, but it does at least try to bring in a new set of characters for these idiots to interact with.  Still, some good gags aside, while this cast certainly tries to make things work, I just did not find myself laughing that much, which is all I really wanted to do.

There is not much else to say here.  One can argue that in order to laugh at a film like this, you really have to turn your brain off and just let it all go.  That is fine for those who do that, but I was pretty pleased to leave my brain on and watch the first film again a couple days ago, let alone other, very silly comedies, and laugh throughout.  Dumb and Dumber To is just not very good.  I laughed a little, not a lot, and not nearly enough to praise it for the sake of others.

Harry:  This is my associate, Dr. Christmas.
Dr. Meldman: Christmas, as in the holiday?
Lloyd:  No, as in the tree. 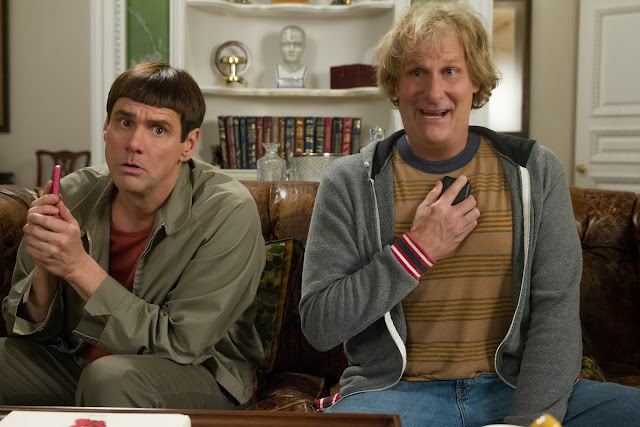