‘Whiplash’ Most Certainly Hit The Tempo I Wanted (Movie Review) 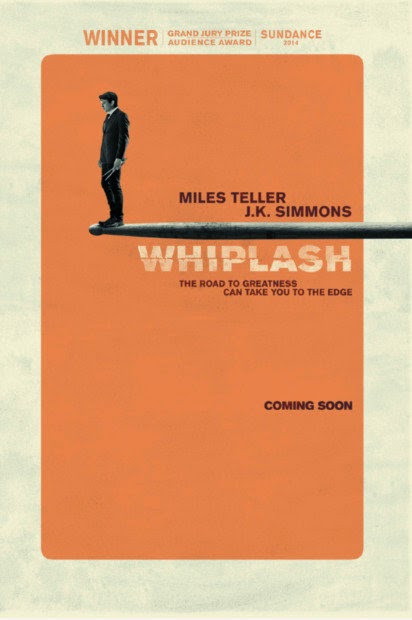 Fletcher:  You want the part?  Then earn it.

Being a great drummer is clearly no easy feat.  One would not think a young jazz musician wanting to play drum at a music school would be the source for a gripping thriller, but then again, writer/director Damien Chazelle was responsible for writing the film Grand Piano, which was a thriller about a man forced to play the piano (or else!).  That in mind, Whiplash is not a guilty pleasure take on a Hitchcockian thriller; it is an intensely focused drama that matches its ace lead performances with striking cinematic visuals to deliver a pretty fantastic film.  This is a film that pushes its characters to their limits, in an effort to show what it means to be talented, passionate, and transfixed by getting something exactly right. 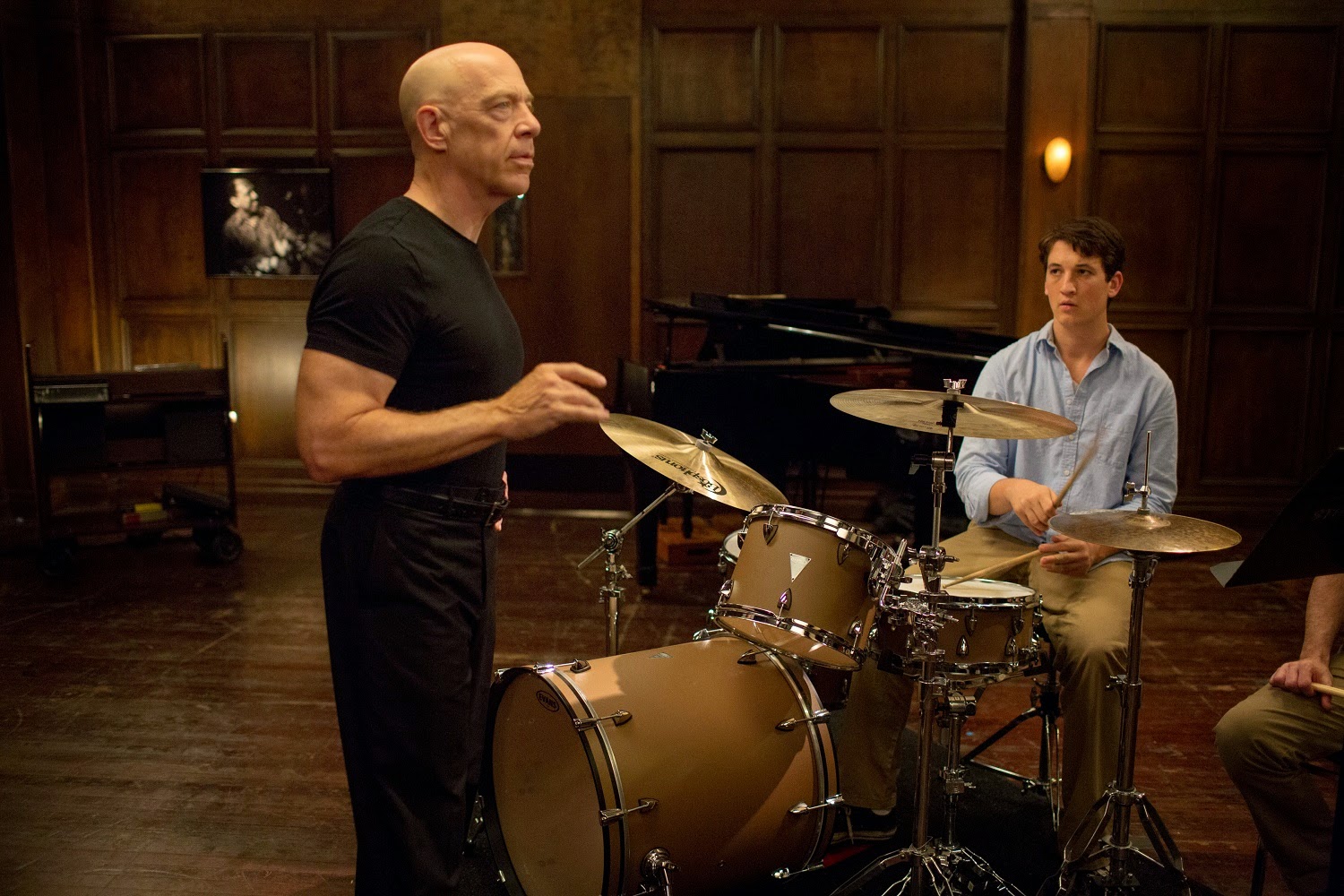 The film stars Miles Teller as Andrew Neyman, a young drummer who is currently a student at one of the most respected music academies in the country.  He manages to catch the eye of music conductor Terrence Fletcher (J.K. Simmons), who invites Andrew to join his band.  What the other students in this band know, which Andrew will soon find out, is that Fletcher is a terrifying perfectionist, who will say and do anything to have his students reach the potential he sees in them.  This leads to something of an all-out war between Andrew and Fletcher, as Andrew wants to stop at nothing to succeed in the eyes of the domineering Fletcher.

I will say again that this film was intense, but not in a traditional way.  Sure, the idea of an underdog rising up through the ranks and using a forceful mentor figure to help inspire someone are just some of the ideas that we have seen in films treading similar territory before, but Whiplash finds a way to somehow balance the tone of a psychological thriller with the vibe of a pitch black indie comedy.  I guess that combination equals ‘drama’ as far as simple genre classification goes, but regardless, Whiplash succeeds in not only showing what it is to go all out in an effort to match a dream of greatness, but in finding a way to make it painfully entertaining to watch. 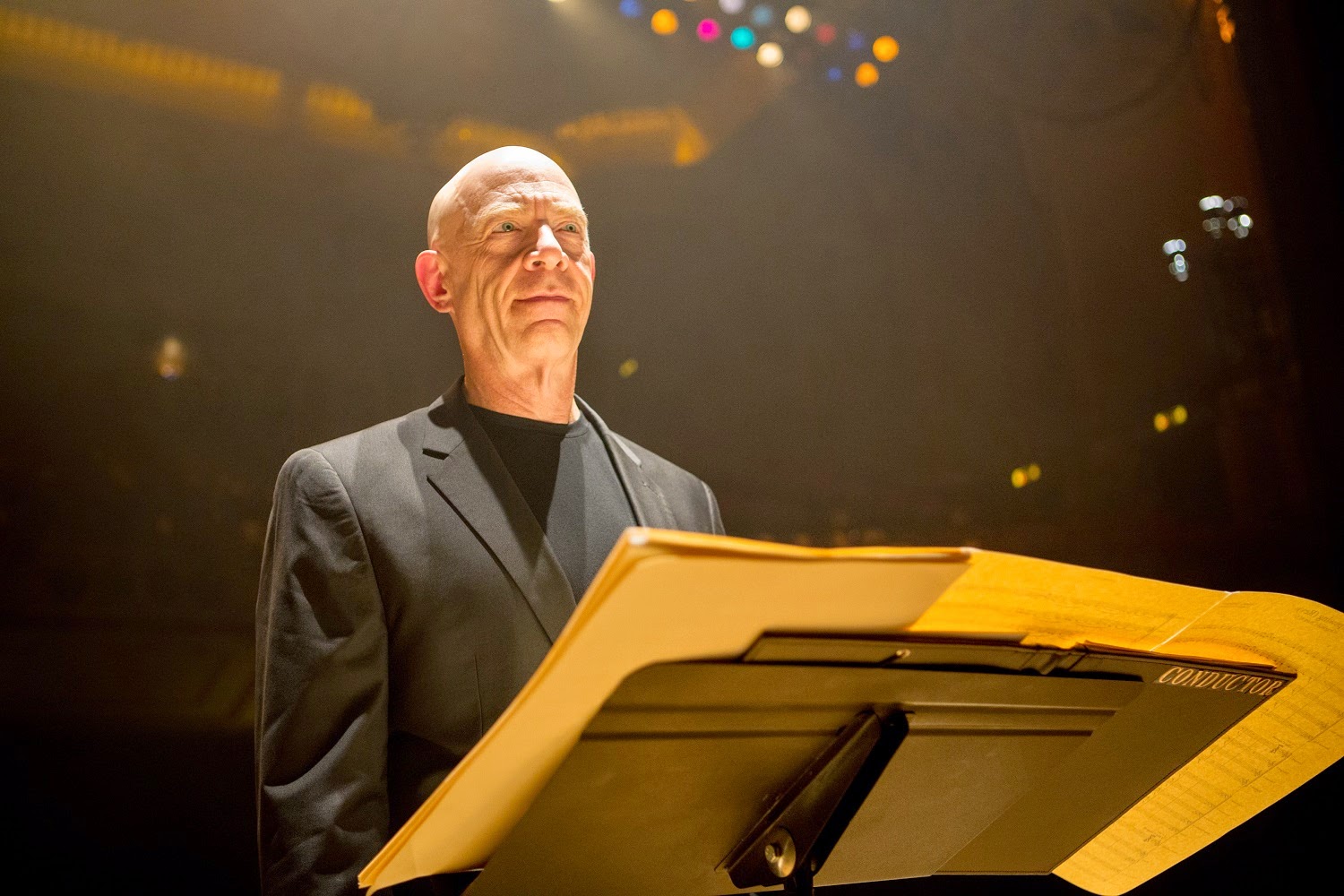 Given that this film incorporates some autobiographical elements, Damien Chazelle clearly had a vision of how he could best show the extremes that this film presents, but whatever his discussions to cinematographer Sharone Meir were like, they led to a film that goes to bloody lengths in an effort to show what it is to work so hard (or drum so severely), as Andrew works his hardest to please both himself and Fletcher.  A lot of the drumming was Miles Teller, some of it was the work of others, but regardless, you see the full extent of the damage this sort of practice can do to a person and the visual approach to it serves this film tremendously, which plays well into the performances we see.

As Andrew Neyman, Miles Teller shows himself as a committed young performer, who can go back and forth between charmingly likable and intense and brooding.  While I have seen his display of talent in films like The Spectacular Now last year and a lesser effort like That Awkward Moment earlier this year, Whiplash has him going toe-to-toe with another very reliable actor and he is very much able to hold his own.  Speaking of which, J.K. Simmons does not have to do much to be convincing on screen, but that was not enough for him with this Fletcher character.  This role relies on J.K. Simmons to walk a very careful line of being a mentor-figure as well as a bully, who is happy to throw things, slap students, and hurl out a variety of (admittedly very creative) slurs in order to inspire his band to be the best that they can.  Is it too much?  Of course it is, but in this film, Andrew wants to go to the extremes that Fletcher is pushing him too, and these two actors pull that relationship off incredibly well. 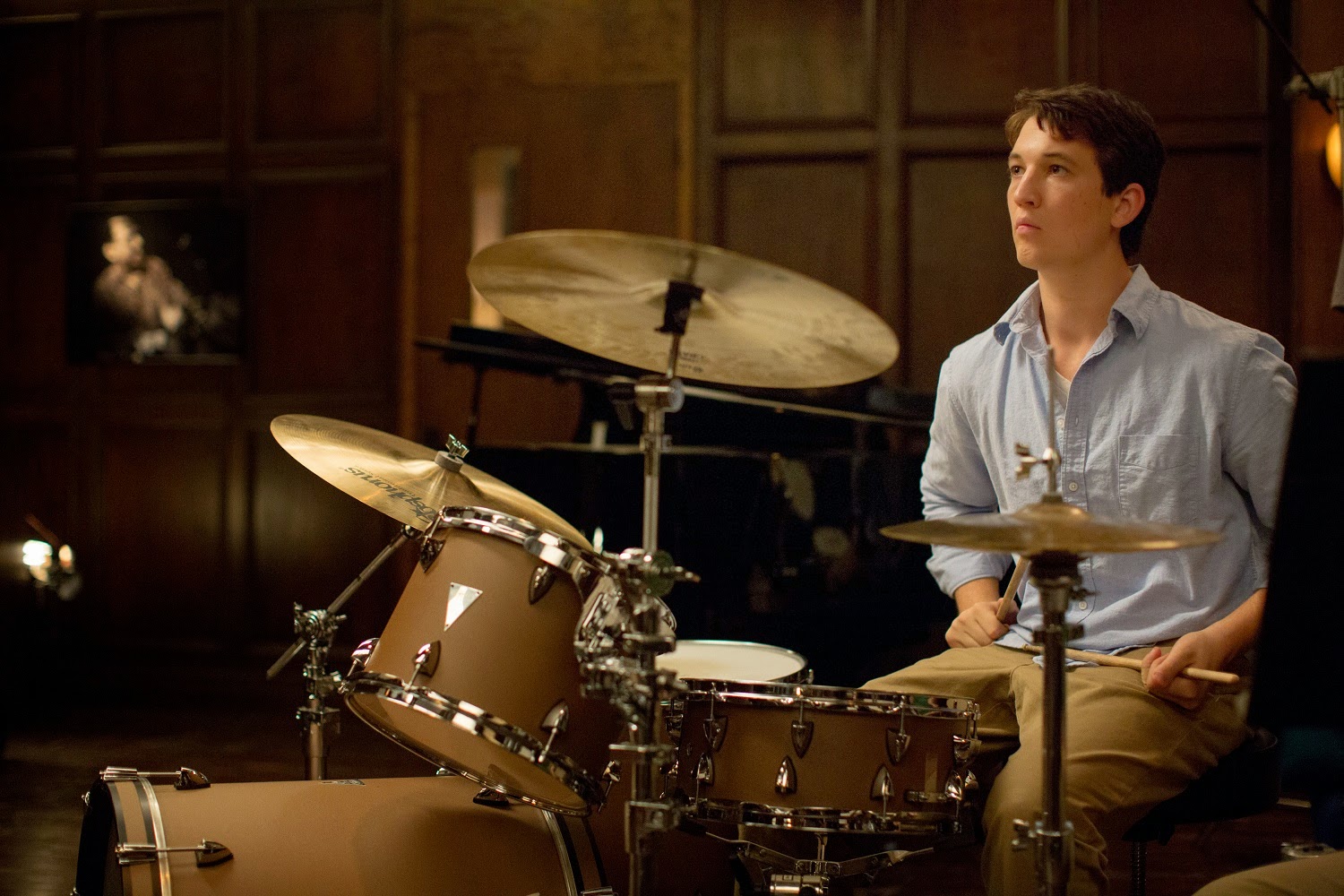 All of this in mind, the film is really fun to watch unfold.  Seeing Andrew suffer through his private practice sessions, which are visually put into detail via slow motion shots of bloody hands being shoved into ice water, can be painful to see, let alone the treatment he receives from Fletcher, but I could not take my eyes away from what seemed like electrifying work on display.  It helps that the film functions in a way where one can see the humor in some of the most excruciating of situations.  I may not ever want to go through some of the things that Andrew is put through, but his position and some of the turns in this film do manage to earn a share of dark laughs.

Even the calmer moments play well, beyond serving as nice breaks from main drumming action in the film.  Paul Reiser has a small role as Andrew’s father and he is plenty effective here, as is Melissa Benoist as Nicole, the girl who works at a movie theater, who Andrew eventually works up the nerve to ask out on a date.  These relationships are tested as well and serve as strong ways to understand if it is really just Fletcher that pushes Andrew to the lengths he goes to be the drummer he wants to be. 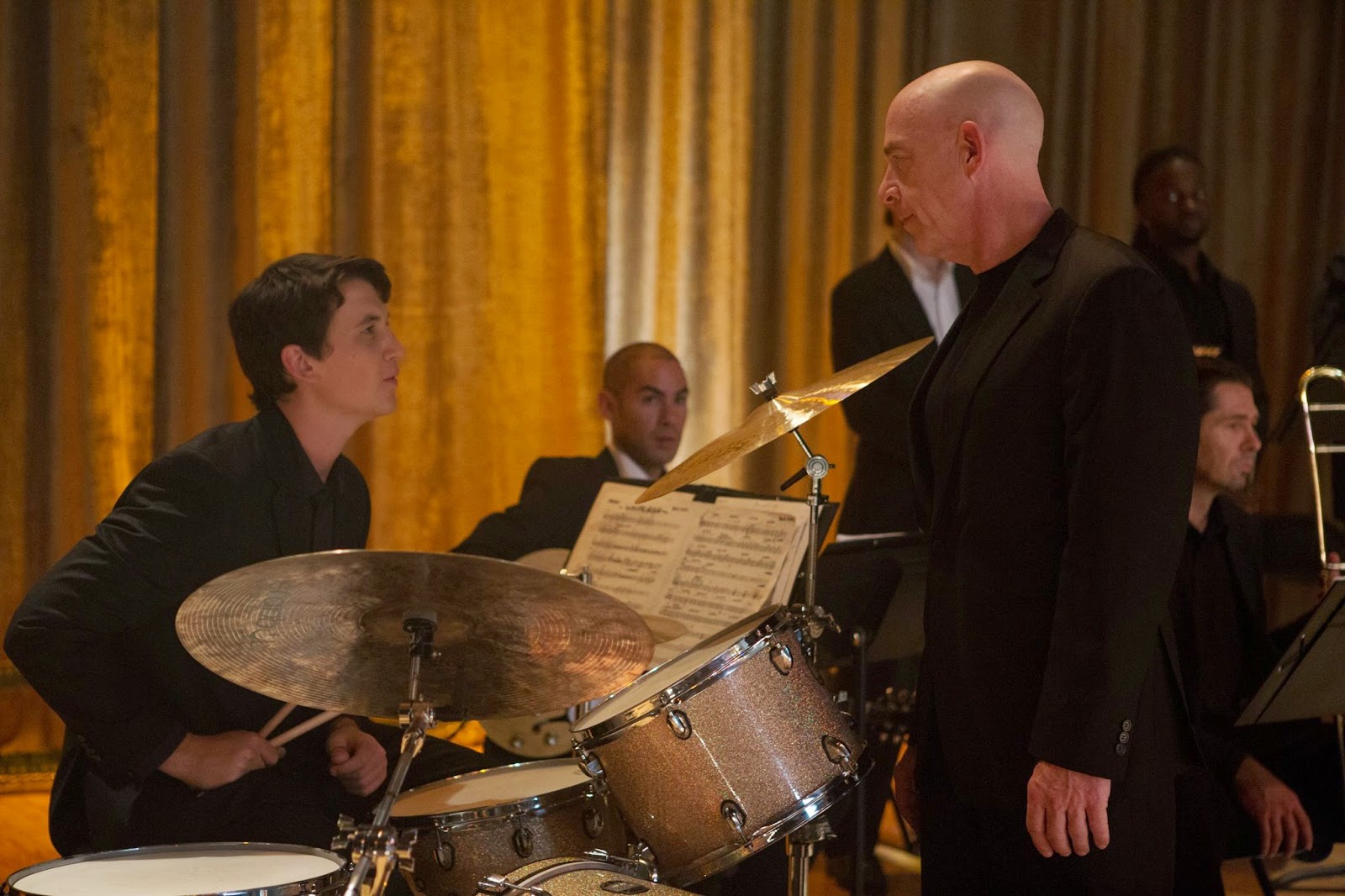 Whiplash is a wildly entertaining feature that capitalizes on strong performances and a great cinematic sense of how to really churn out thrills from the story of a kid at music school.  While Andrew is criticized for missing a beat, this film certainly does not.  It is both an enjoyable and intense experience that really finds a way for its audience to look at Damien Chazelle’s raw expression of jazz in the realm of film.

Fletcher:  It’s about pushing people beyond what is expected of them. 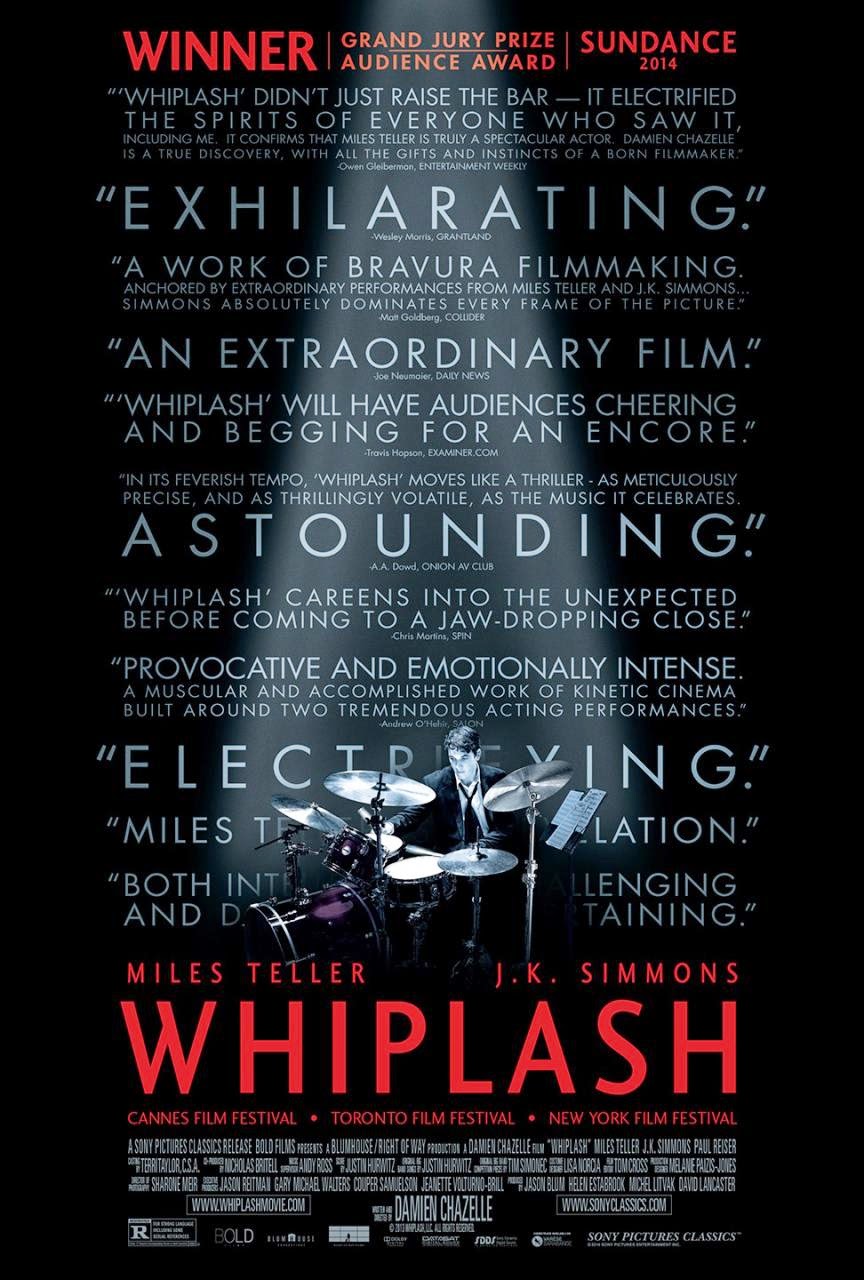