A Tough Drive And the ‘Fury’ Five (Movie Review) 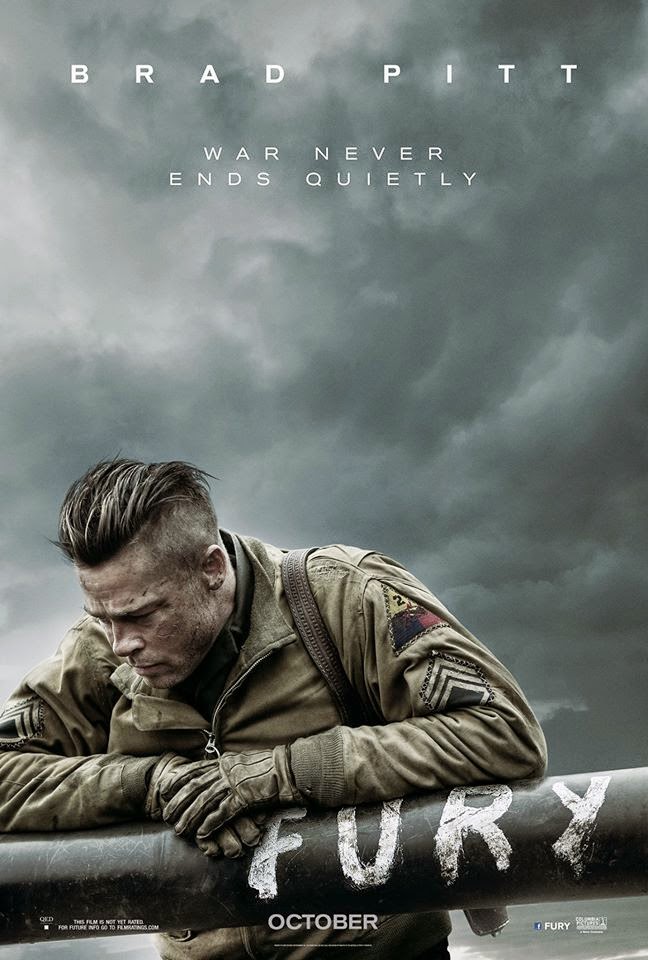 Wardaddy:  I had the best gunner in the entire United Army in S.E.  Now I have you.

World War II has been the source of a lot of great war movies, let alone movies in general.  It seems to have a near endless supply of material, when it comes to developing new ideas for screenplays.  Fury may not be the first film about a tank crew, but it does seem like a refreshing approach to this sort of film in modern times.  With that in mind, while writer/director David Ayer was able to provide some exciting action sequences, a thrilling final act, and strong enough material for the actors to work with, there is only so much a film like this can accomplish when we end up not learning a whole lot about who this crew is.  As a result, Fury is a pretty straight-forward and occasionally intense war film that certainly looks like the effort to keep it authentic was made, but does not have much complexity, beyond visceral thrills. 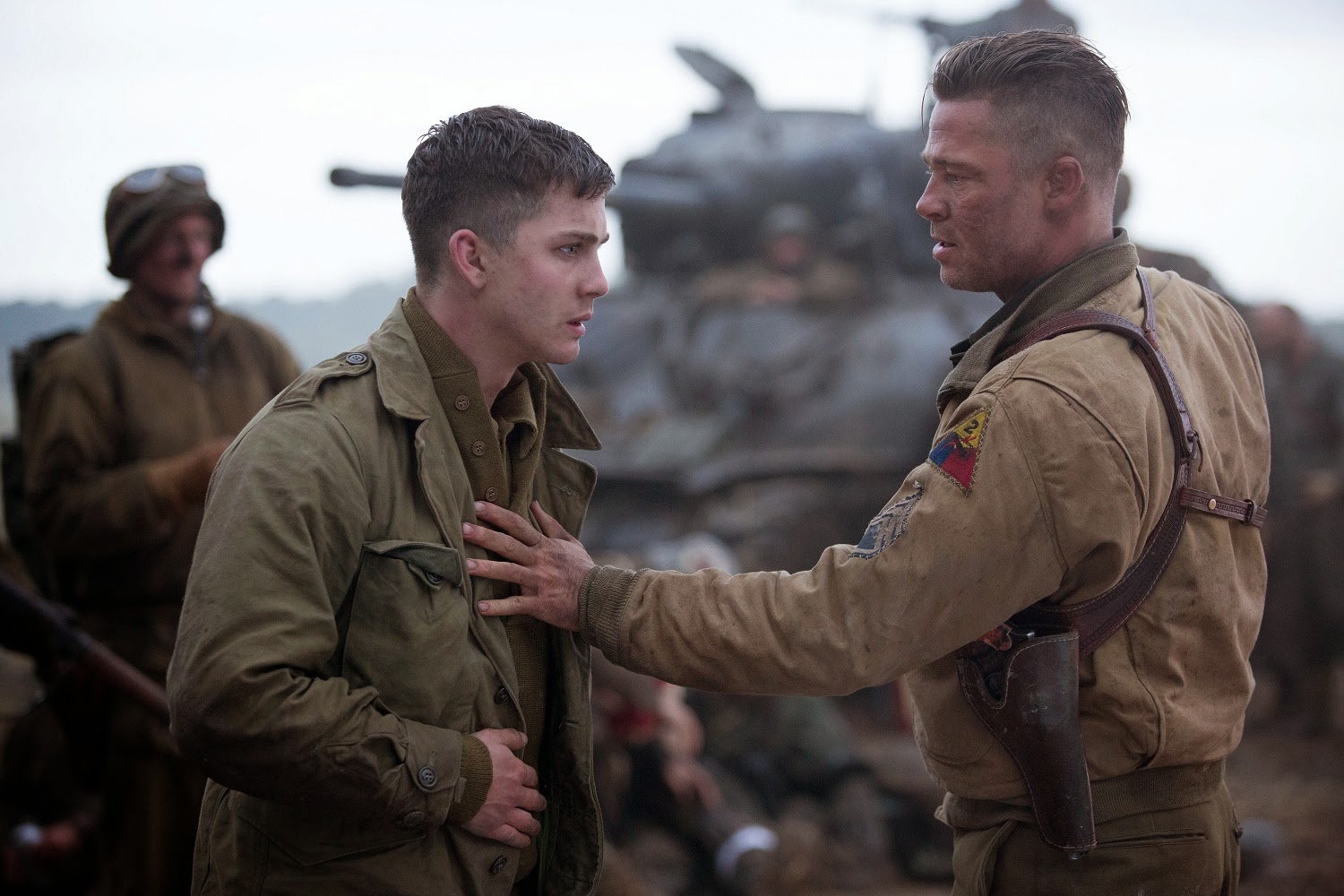 The film stars Brad Pitt as Don ‘Wardaddy Collier’, the commander of a Sherman tank, nicknamed Fury.  He leads a five-man crew that just lost a man.  A new gunner is brought aboard.  This gunner is Norman (Logan Lerman), who joins in with ‘Bible’ (Shia LaBeouf), ‘Gordo’ (Michael Pena), and ‘Coon-Ass’ (Jon Bernthal).  Which one do you think is the vilest?  Anyway, despite how green Norman is to the world of tank gunning, he is brought along in the final push into Nazi Germany during the last month of the European Theater.  Norman may or may not adjust to the life of a crewman on a tank, but he will be forced to act, when it comes to dealing with overwhelming odds.

At 2+ hours, regardless of how quick-paced it may have seemed, there is not much to the story of Fury.  That is almost a little strange to say, given that we do not really learn much about the various characters involved to make up for the simplistic story, but the film really only has tank battles and one very long segment that tries to carefully balance the adjustment these men have made to being constantly in battle, but still trying to hold onto their humanity when the time calls for it.  I will get back to that scene soon, but as far as this film goes, it is not as though it is excessive in its length, but I do wonder if David Ayer had more to say about these characters that was left out. 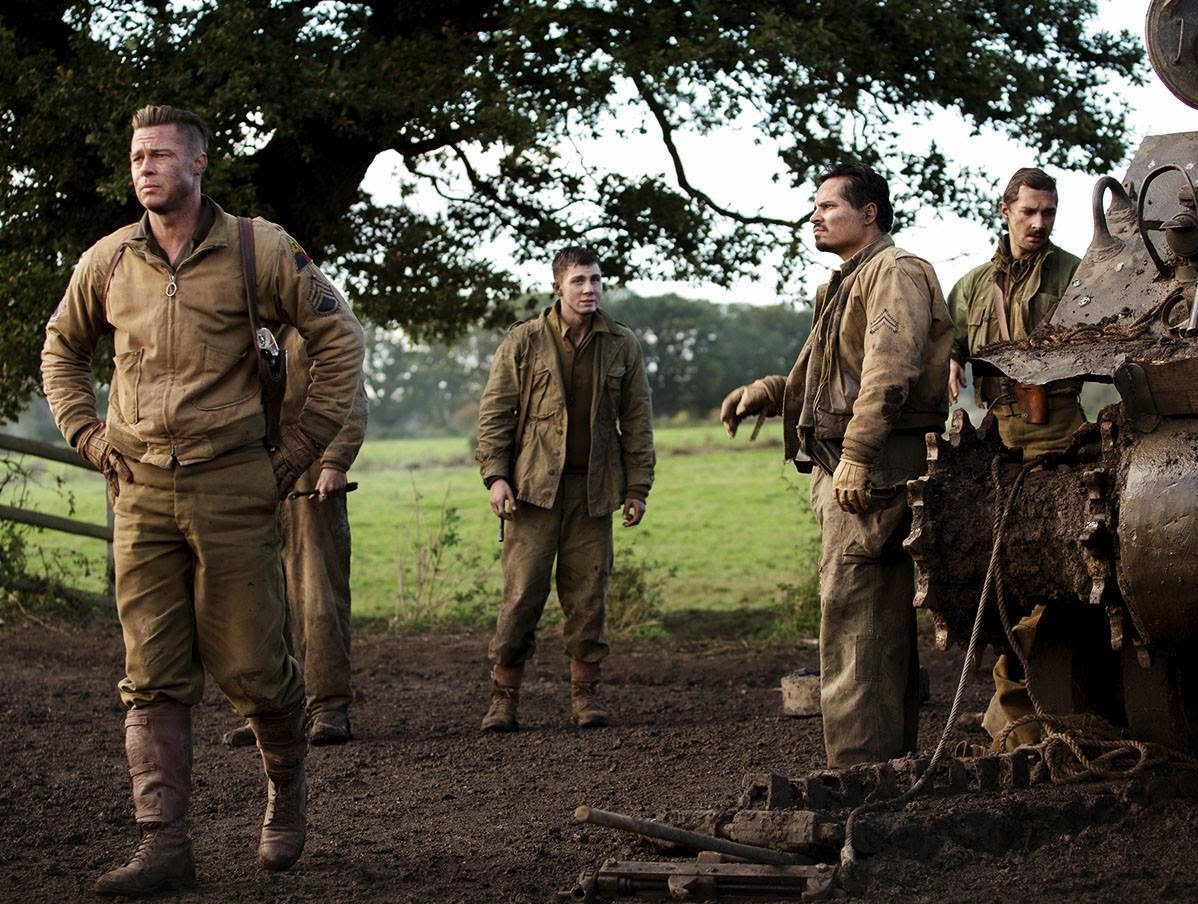 While Brad Pitt and the cast do a perfectly fine job at acting in the scenes that require them to do more than shout orders at each other and hurl obscenities at the Nazi soldiers, what do we really come away with knowing about them, aside from the basic details that distinguish them?  By default, we come to learn the most about Logan Lerman’s character, as he is basically the audience surrogate as well as the new guy that has to go through an arc of sorts, when it comes to dealing with the opposing forces and whether or not he knows how to cross a certain line regarding morality in war.  For everyone else, we pretty much get the most from just the assigned nicknames for each of them.

Brad Pitt is the battle-hardended leader, as he is called ‘Wardaddy.’  LaBeouf has a religious bent, as he is known as ‘Bible’.  Pena occasionally speaks Spanish and is known as ‘Gordo’ which is all we really know about him.  It goes on like this.  Sure, one can argue something similar for a film like Saving Private Ryan, which also featured a variety of characters defined by some simple character traits, but that film also had more going on thematically and in the development of the real key players in that film.  Fury does not match that complexity, it does not even make much of an attempt at standard melodrama, which is a bit refreshing as well, I suppose.  It did not leave me reflecting on impact it tried to create, once all hell broke loose and our five-man crew faced off against hundreds.  Beyond not wanting to see harm come to the leads, there was nothing that defined these guys in a way that made me want to be more sympathetic towards them.  Ayer is showing us that ‘war is hell’ and while it is not a profound statement, he does a fine job of putting that on display, just not in a way that stems from strong characters dealing with it. 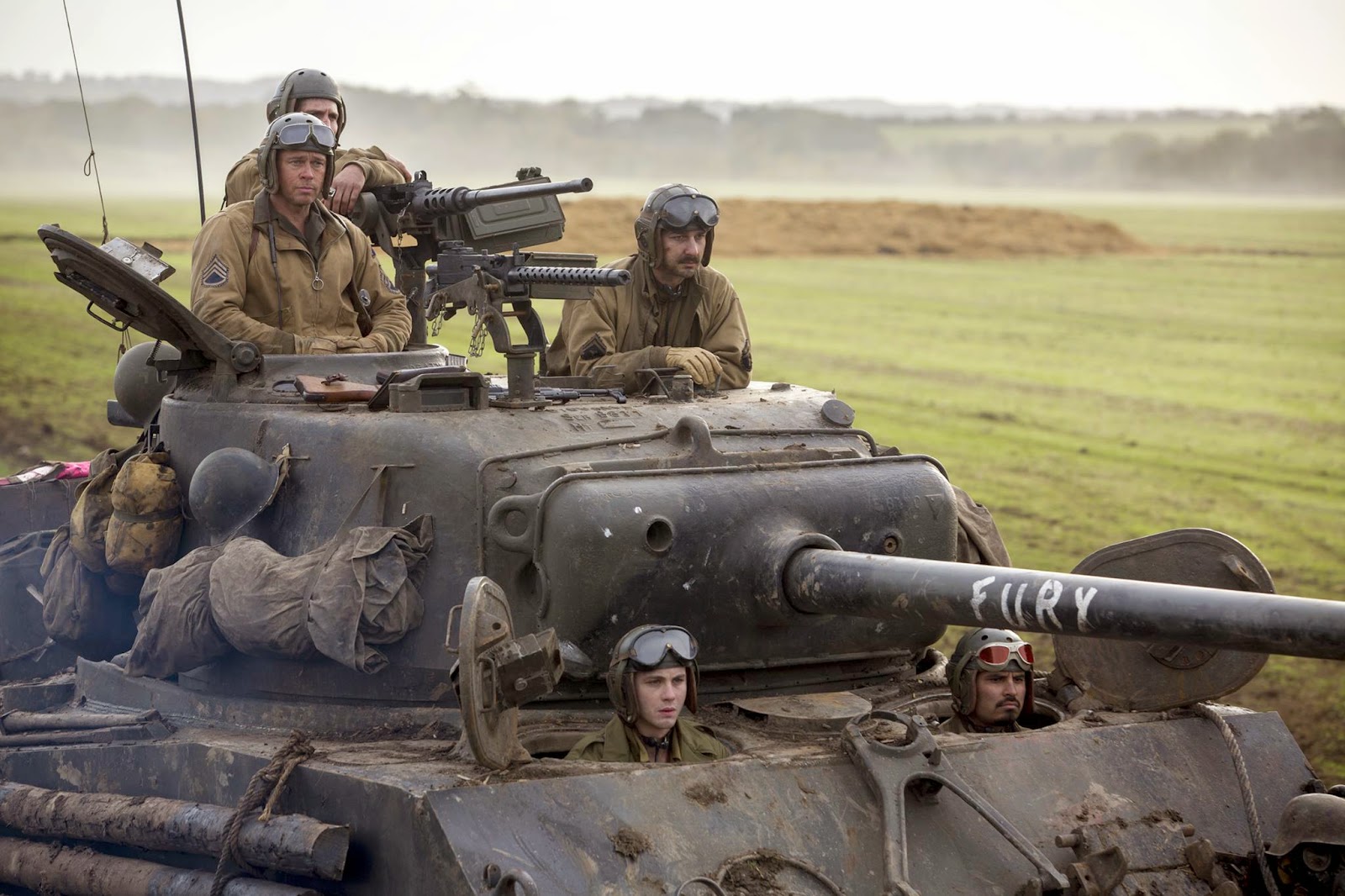 With that in mind, these actors are doing great work in this film.  I can go back to a scene I alluded to earlier.  One sequence finds Pitt and company having invaded a small German neighborhood and we find ourselves watching Pitt and Lerman explore an apartment building, only for them to find two women attempting to hide.  What follows is a frightening display of attempted normality, as Pitt essentially orders everyone to play house.  This scene goes on long enough to make you question the actions and then goes on even longer to fit in the rest of the cast.  In all of this, regardless of how an audience member takes it in, the acting is incredibly solid.  We see each actor buried in the roles they have been assigned to play.  It is the kind of scenario where clearly these actors know who they are playing, but the film is still holding us back from understanding why they are this way, beyond just the idea that ‘war has its effects.’

Putting this aside though, as a technical exercise, Fury is quite exciting.  Tank battles in this day and age can be made to look incredible and that is something this film is able to accomplish.  As much as I was a fan of Ayer’s work on End of Watch, seeing him take a break from gritty cop dramas (mostly set in LA) and spend some time back in WWII has led to a pretty solid action experience.  This film is brutal in its display of war-based battle footage and it looks and sounds pretty amazing, when it comes to the amount of effort put forward to really show what is necessary.  If there is a reason to see this film, it is to see the action on display, as the film’s story may have an inevitable outcome, but the thrills involved in getting to that point is very worthwhile. 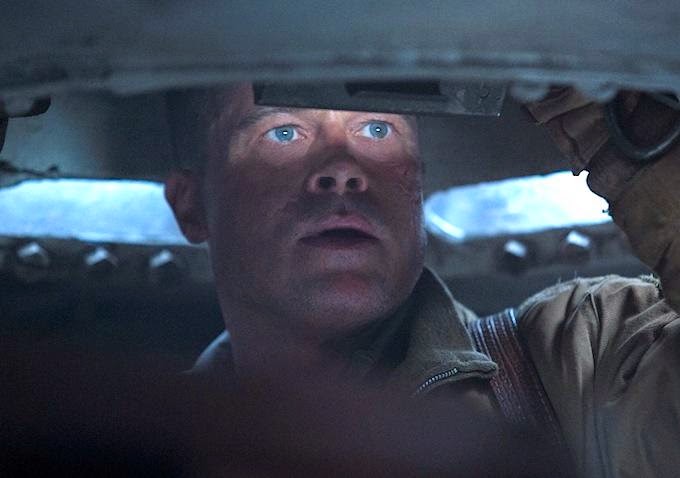 Fury amounts to being a graphic, but watchable war picture.  The characters are thinly defined, but the acting is strong from all involved.  It is the tank battles that really make this film stand out though.  David Ayer trades in deeper focus on the men involved in exchange for a tense and action-packed film that seems to nail the look and feel of an environment plagued by combat.  For that reason, this may not be one of the defining films that portrays WWII (nor does it need to be), but it is an effective display of the harsh realities of war.

Wardaddy:  Best job I ever had. 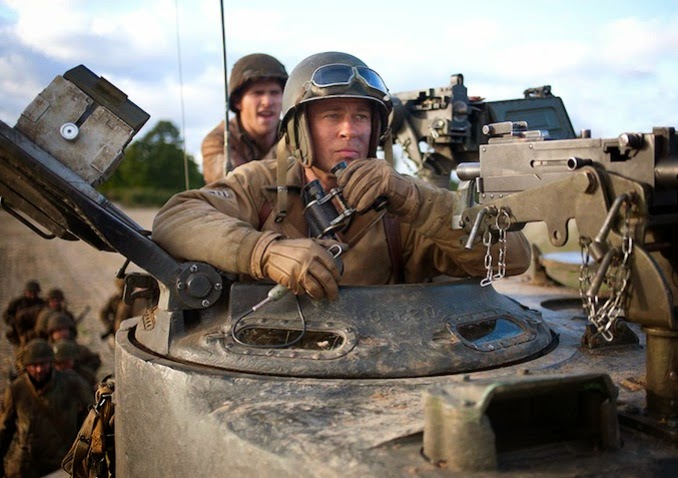 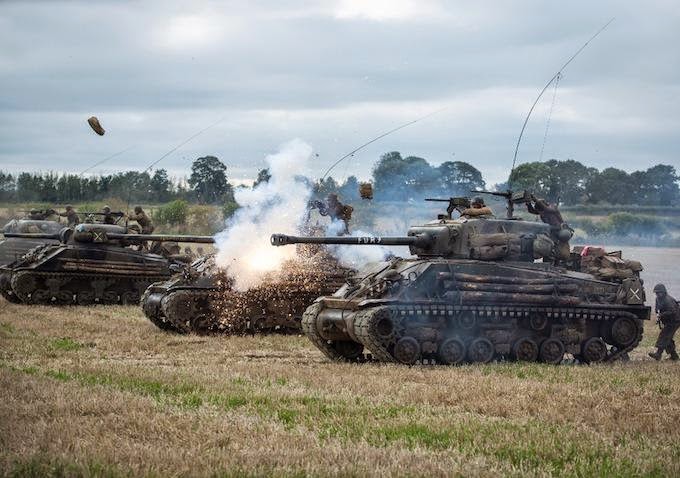 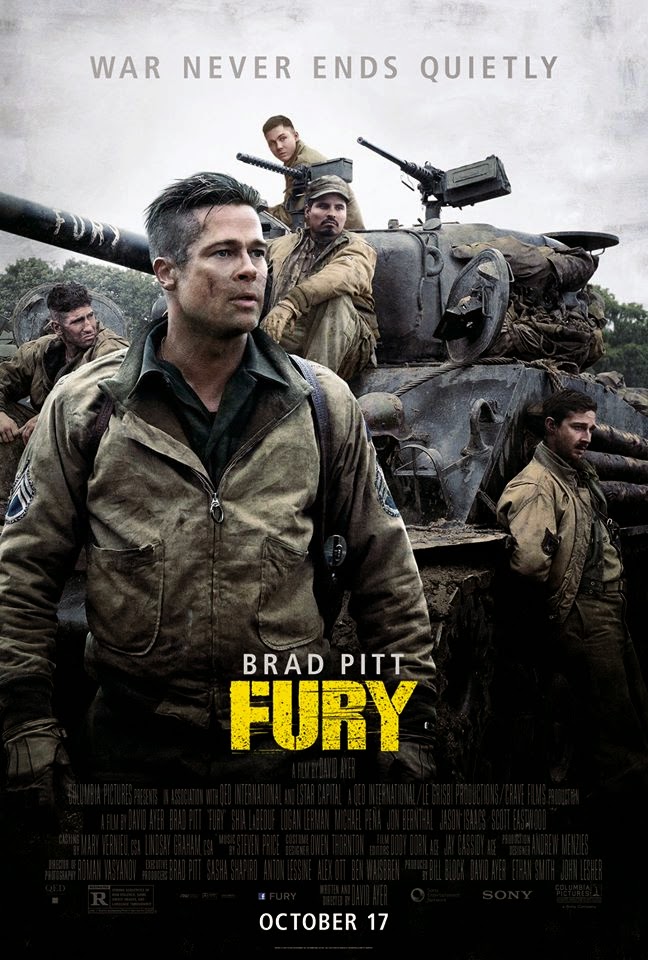