If You’re ‘The Maze Runner’, You Run Like Hell (Movie Review) 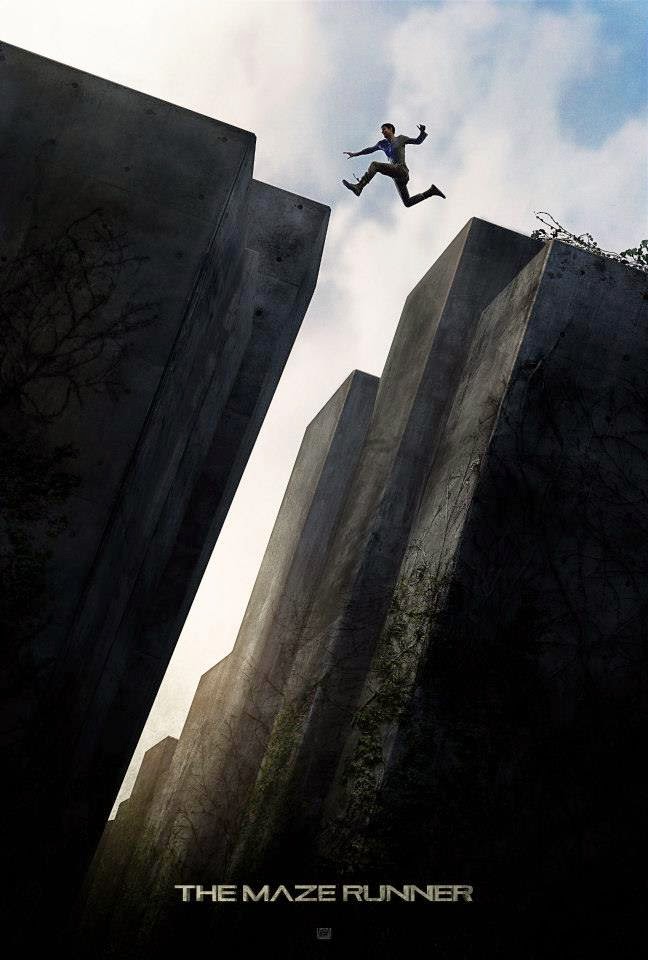 At this point, seeing another YA novel adapted into a film only brings up so much excitement.  Part of it comes from there being only so many of these types of books I want to see as films and the other part is pretty simple: lots of these films are fairly dull and too focused on being a franchise-starter first, an enjoyable film second.  I had no real opinion on The Maze Runner going into it.  I have not read this book series, the cast is made up of younger actors I have seen in some things, but haven’t regarded as ‘the next big thing’, and there is a rookie director at the helm.  Keeping all of this in mind, it would be easy for me to go into the flaws of the logic in a movie like this or even how it could have handled certain aspects regarding dramatic tension better, but honestly, I had a good time watching this film.  The Maze Runner has a key thing going for it and that is consistency.  It is not overlong, it is decently acted, features effective enough visuals, builds its tension and mystery well, and has a serious tone that does not come off as cheesy.  This may not be the next big triumph for YA novel film adaptations, but it is far from the worst. 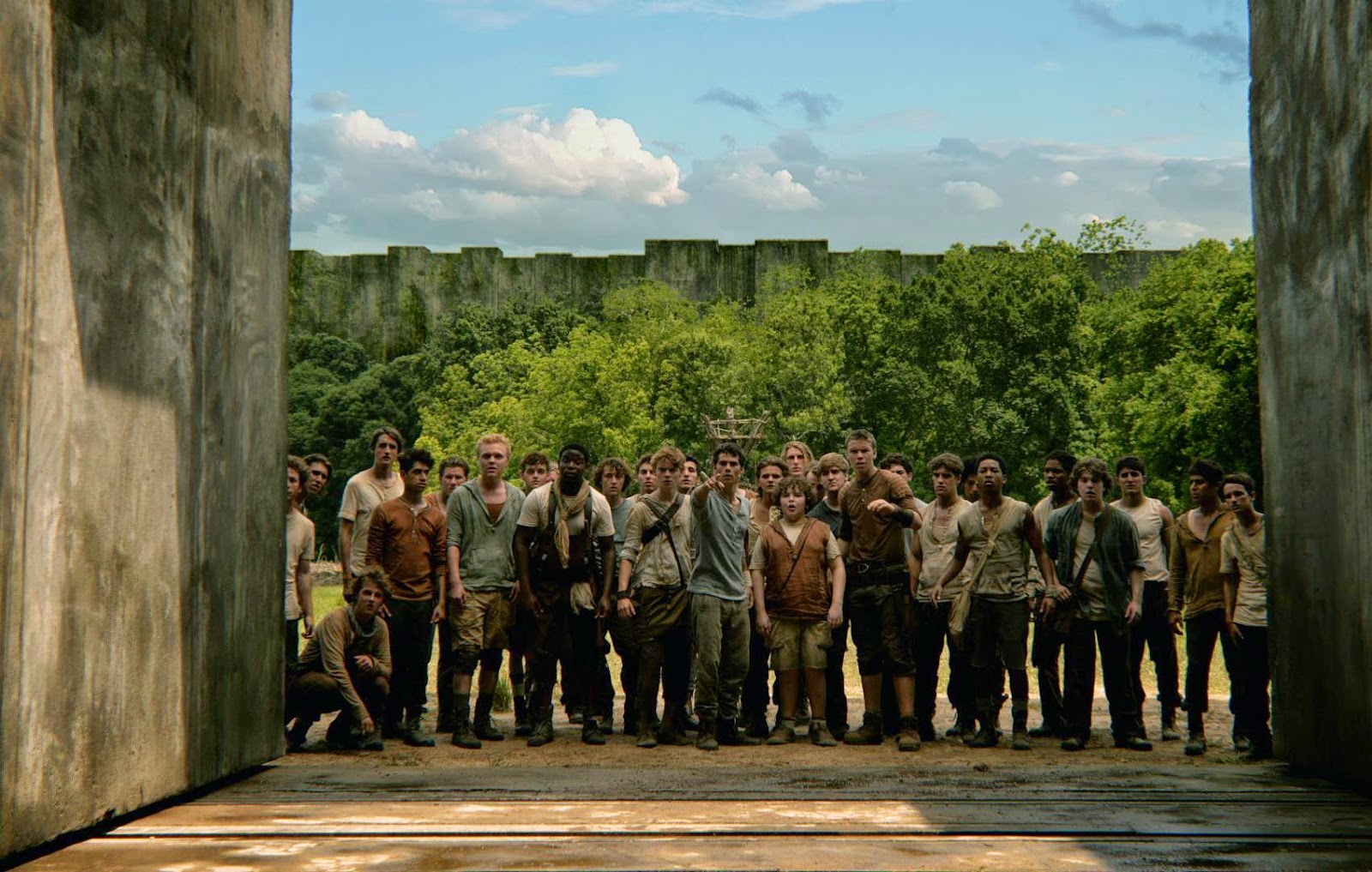 It is easy enough to bring up Lord of the Flies and The Hunger Games, so let’s just get that out of the way now.  This is a film where a random young man is thrown into a situation and has no idea who he is or how he got there.  The film begins with Thomas (Dylan O’Brien) waking up in an elevator that delivers him to an open grassy field, with a nearby forest.  He is greeted by a large group of boys, similar in age, and soon learns that he and the others are surrounded by giant walls.  There are openings in these walls, which lead to a preposterously large maze that shifts around and contains evil mechanical spiders, making escape pretty much impossible.  Some of the boys, known as runners, have the task of trying to find a way out anyway and while rules have been set to keep these kids from diving into inner-chaos, Thomas has no desire to just sit around and hope a solution is found.

Wisely, given that only so many of these types of films have proven to be successful, Fox decided not to hand a huge budget over to director Wes Ball, but instead apply a reasonable amount of money to bring this world to life (having young actors instead of movie stars certainly helps as well).  As a result, The Maze Runner plays out in a fairly straight-forward manner, meaning that the rules and geography of the world are established quickly and there is not too much visual noise to distance me from this very plot-focused film.  I had issues with the amount of darkness during scenes that feature giant mechanical spiders fighting kids at night, but that comes with the territory of keeping special effects costs low and was not enough to disinterest me in how things would play out.  Thankfully this film is not in 3D, which would only darken the experience.  Come to think of it, given the relatively low budget for a film like this, I would applaud the visual grandeur and presentation that is achieved, which includes the vibe created by John Paesano’s score and the very effective sound design. 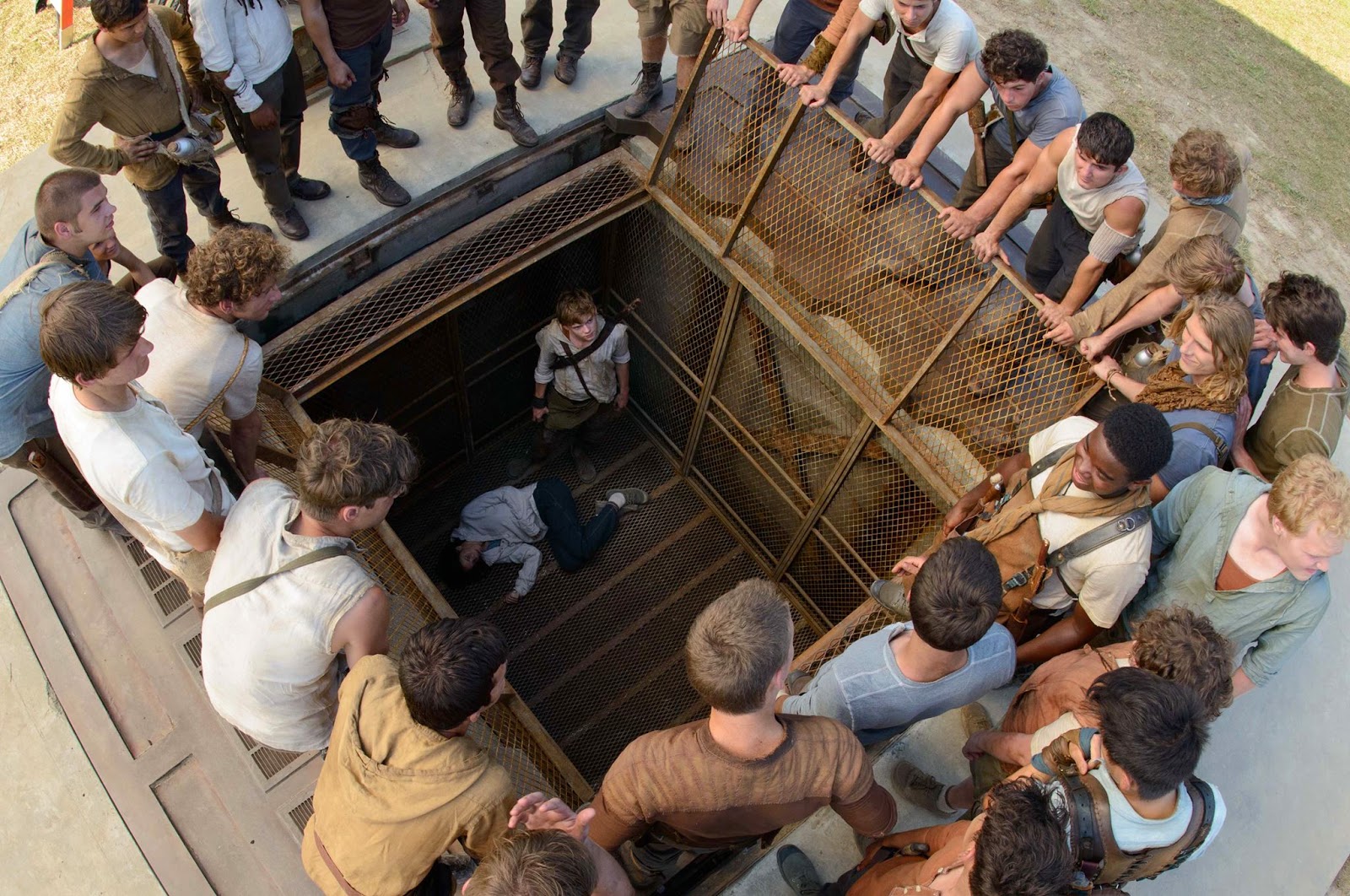 Without digging into the true nature of the maze and the ‘why?’ of it all, I do want to acknowledge the lack of much complexity here.  James Dashner’s original book may suggest more in the way of societal commentary, beyond some of the obvious notions of taking advances too far or what it means to bring a diverse group of characters together to work as a team, but the story in this film, adapted by Noah Oppenheim, Grant Pierce Myers, and T.S. Nowlin, feels pretty streamlined.  It is a bit refreshing to an extent, as that allows The Maze Runner to play as a glossy sci-fi B-movie for the most part, but it does limit the amount of inherent interest I have in this overall story, beyond finding out where these characters end up.  This can be emphasized by the fact that none of these characters are all that well-defined.

Dylan O’Brien does a fine job in the lead role of Thomas.  Whether it is simply do to him being a proactive guy or because I enjoyed seeing his go-for-broke style of running away from things, he was a compelling enough presence, simply because he wanted to take action.  At the same time, Will Poulter is saddled with the familiar character that just wants to naysay everything and exists to be a thorn in the sides of other characters.  I like Poulter in general, so it is a shame that he was the one to make me roll my eyes so much.  The other actors only register so much, depending on how pleased one is by their broadly defined characteristics.  Aml Ameen comes the closest to feeling the most fleshed out, as he is both the leader and the oldest, but even he is underdone by having us told about him by others, rather than really getting a chance to learn more about this guy from a more organic perspective.  I could mention the girl that gets thrown into this film (played by Kaya Scodelario), but she has very little to do, which thankfully does not include any sort of romantic plotline. 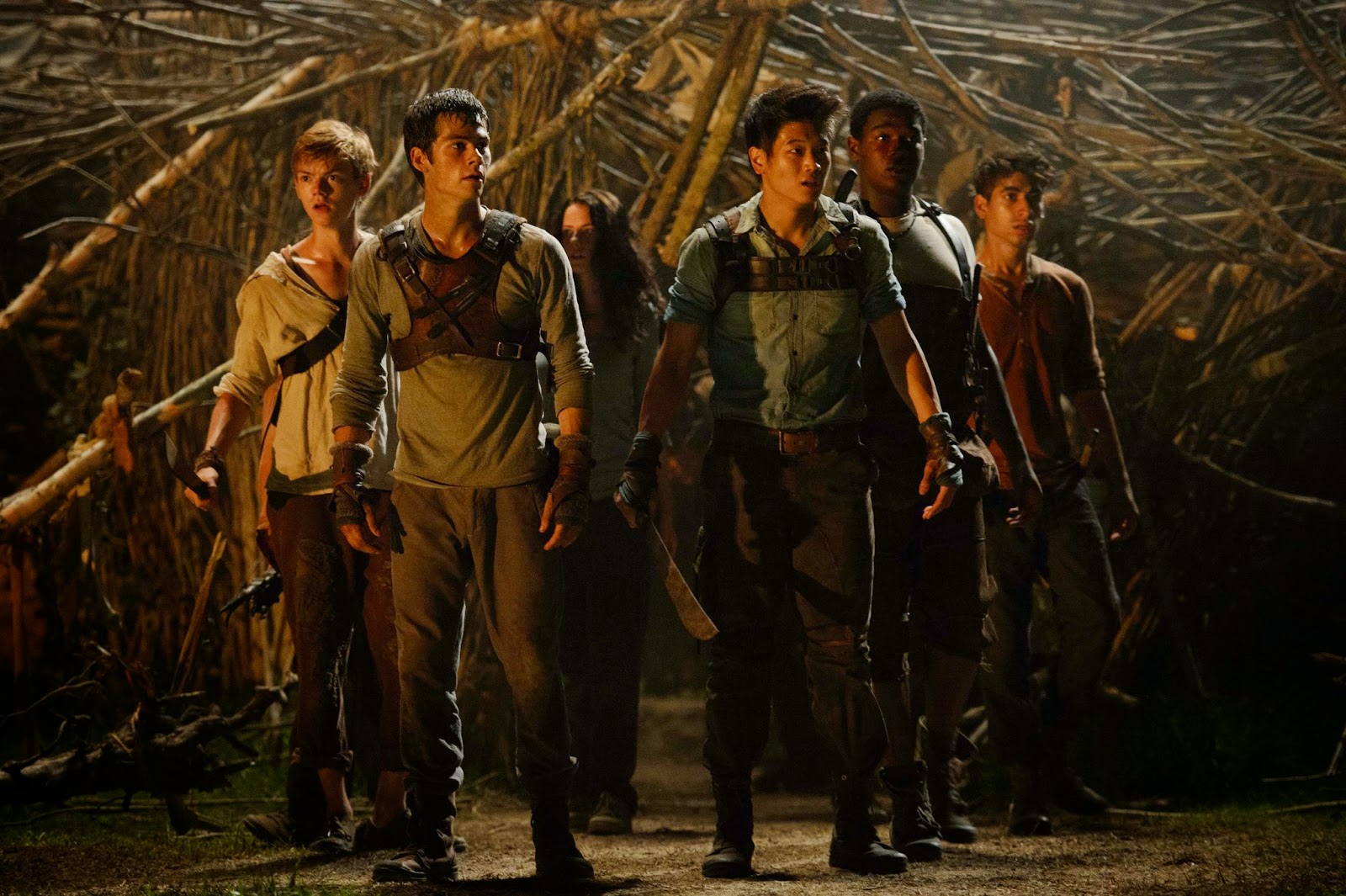 I have mentioned giant mechanical spiders a few times at this point, so I guess it is time to talk a bit about this film’s action.  In a film like this, I guess there is only so much to do in an effort to build a level or reality around the premise.  Make no mistake, The Maze Runner is silly from a certain perspective, but even if I had issues with how effective the visual depiction of these big ass spiders aka “Grievers” was, I think Wes Ball and his team did a fine job of communicating a level of danger that exists in this film.  No one is winking at the camera and while the film has next to no humor throughout, the level of seriousness was not something that bugged me, as it felt appropriate to how these characters were acting.  I may have desired more from who these characters were, but as far as seeing them progress through this story, I was happy to recognize the stakes involved.  Coupling that with the entertaining maze running antics taking place and this film does end up working as a solid boy’s adventure story.

There may be a lack of deeper layers to make The Maze Runner stand out as a great accomplishment in the world of YA novel adaptations, but the film works as visceral entertainment for a teenage audience.  Whether or not this is a faithful adaptation, I cannot say, but based on the film I watched, there was enough in the way of story to at least keep the film intriguing.  While I cannot say I was completely surprised by how things turned out, let alone felt a little displeased by the amount of setup work for sequels employed in the last few minutes, I can say there was enough here to make for an enjoyable work of light science fiction with some obvious influences.  Not every film needs to dive deep into the well of ideas and even while this film lacks aspects that could make it stronger, it is an effective enough ride through maze of enjoyable adventuring. 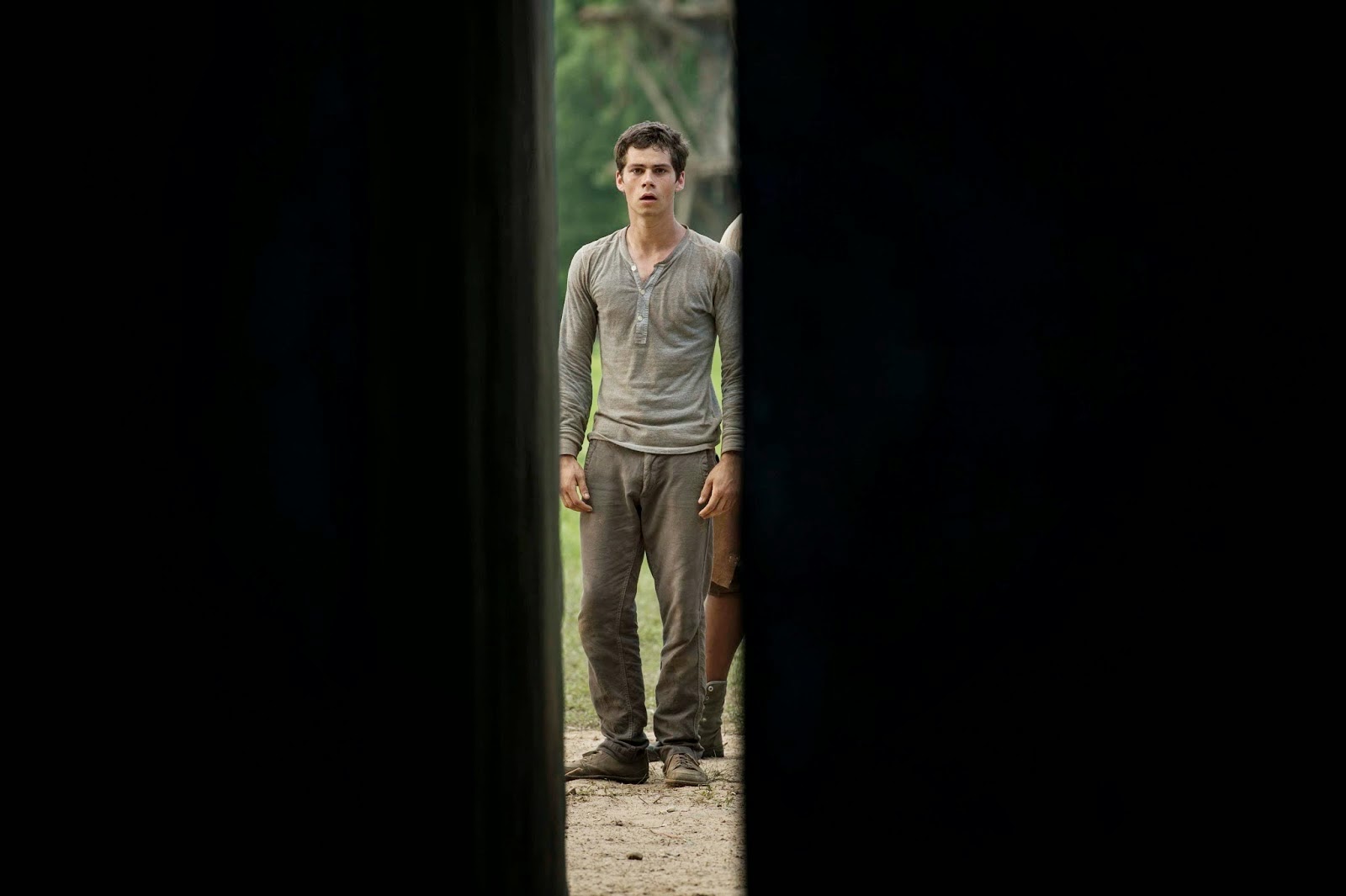 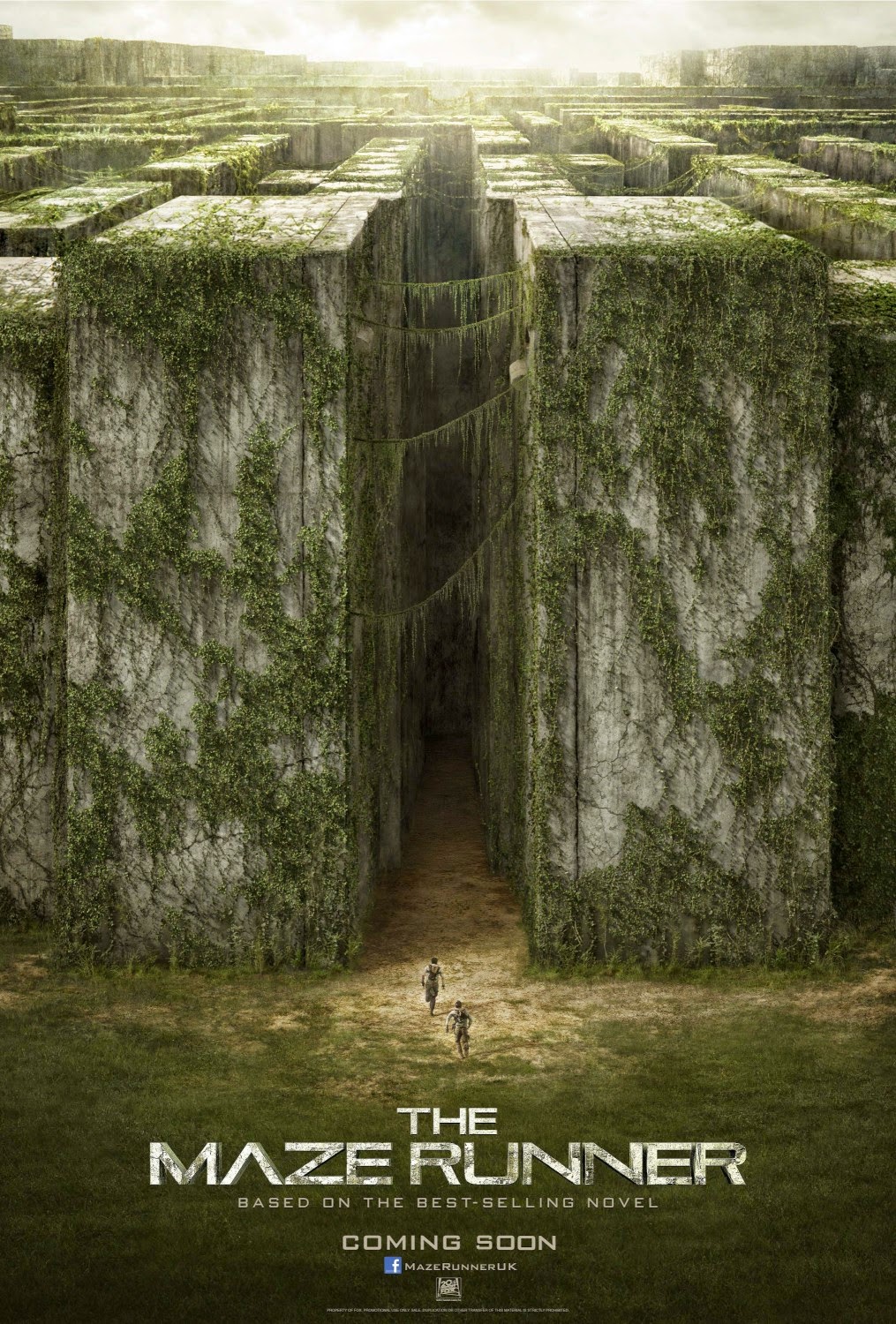