‘The Equalizer’ Takes Too Long To Find Balance (Movie Review) 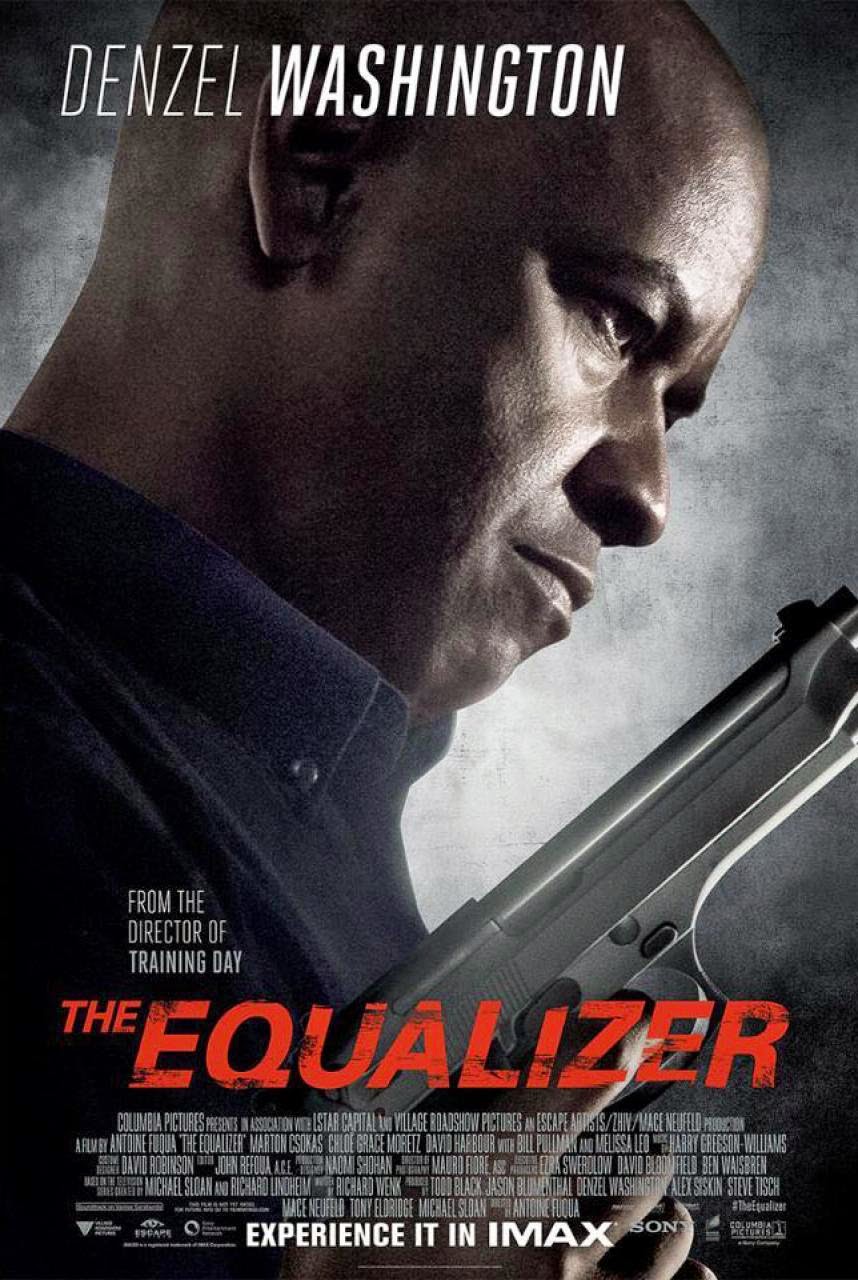 Robert McCall: When you pay for rain, you gotta deal with the mud too.

What do you see when you look at these older actors taking care of business?  A week after writing about Liam Neeson’s latest foray into the realm of B-movie thrillers, I now get to write about Denzel Washington’s latest action/thriller.  All I can say is The Equalizer certainly takes its time.  By the end of this 130 minute feature, it felt like I had watched a whole season of the CBS series that inspired this film and I would not exactly call that a good thing.  Denzel Washington may radiate confidence and director Antoine Fuqua may know how to stage stylish action sequences, but The Equalizer is a film that misunderstands how to balance a sense of poignancy with the slaughterfest that occurs anytime Denzel’s spider senses start tingling.  It also goes on to pad itself with a lot of dull material. 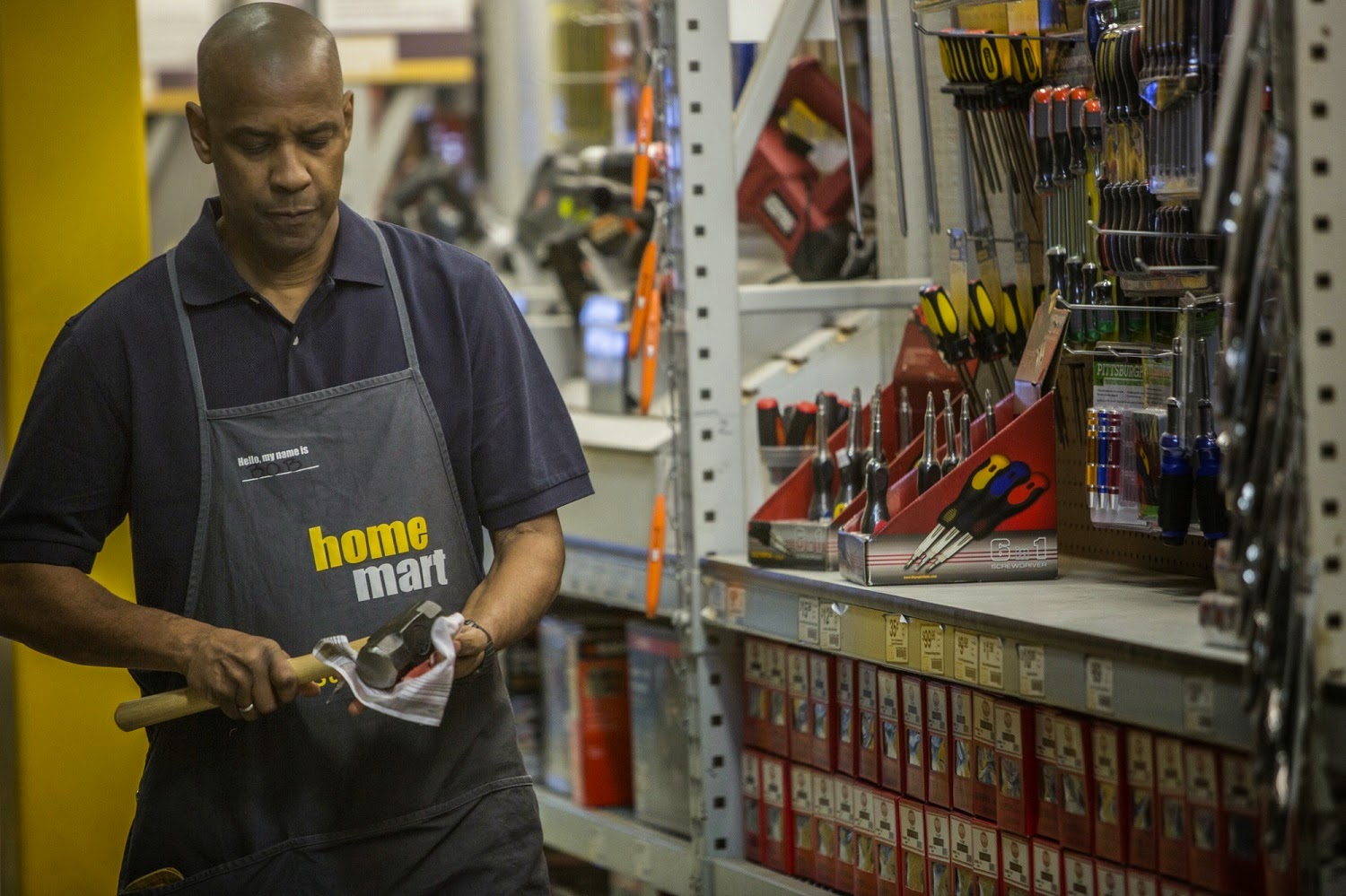 As Denzel Washington is a near spitting image Edward Woodward, it only makes sense that he take the mantle as Robert McCall in this update of the 80s TV series about a former covert operative attempting to live a quiet life, only to be drawn back into action, in an effort to help those in need.  Okay, so it makes little difference to me that Washington has little in common with Woodward.  With that said, he is a sort of older star that fits the bill.  In this film adaptation of that story, we get to see McCall help a number of people in need, but quickly finds himself at odds with a whole team of Russian gangsters, following his attempts to right the wrongs committed against a young prostitute (Chloe Grace Moretz).  Armed with his wits and a desire for justice, McCall does what he does best to sort things out with his violent opponents, only to then have to worry about cleaning up what he started.

Following more recent ventures into the action world with films like Safe House and 2 Guns, The Equalizer falls short on capitalizing on the cool that comes from Washington’s strengths at being an actor that emits so much confidence at all times.  I say this because the film takes entirely too much time to simply see him coast in a role that does not do much to challenge him as an actor.  If Washington wants to portray another heroic action lead that is fine, but do it in a film that is 100 minutes, not 130.  At the length this film is, we get some key scenes of Washington using his natural grace to stare down and confront bad guys, as well as use his particular set of skills to kill the bad guys in slick-looking (and very violent) ways, but we also spend a lot of time seeing things slow down so we can better consider if any of this matters.  One of the problems is right there:  it doesn’t matter. 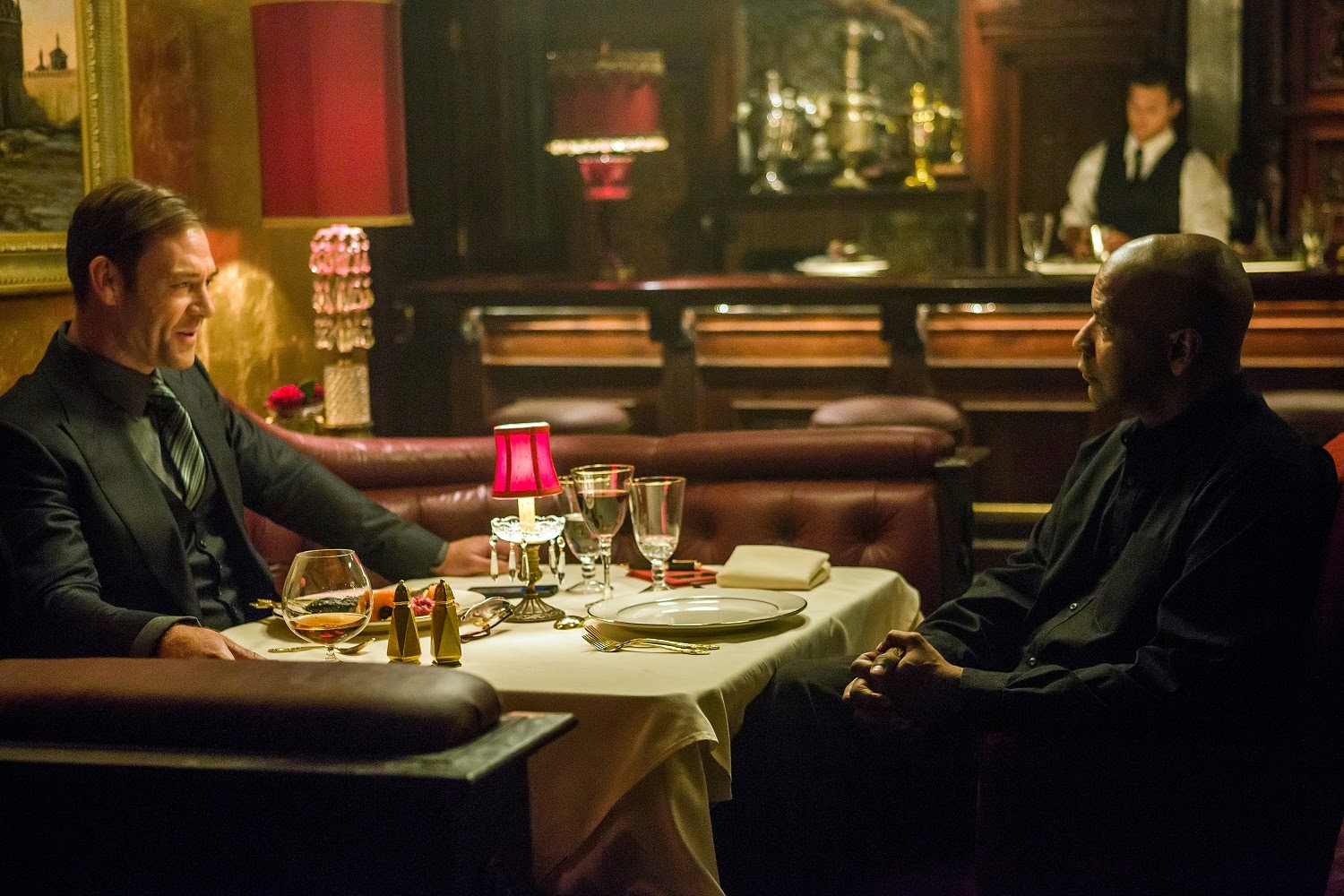 Reuniting with Antoine Fuqua (Training Day) may have been a fun idea, but even he seems to not quite know whether to focus on Washington the ‘actor’ or Washington the ‘star,’ as we get scenes of him reflecting on his actions, as well as slow motion shots of him walking away from explosions, without looking back.  Yes, there is a good amount of action in this film and it is all handled quite stylishly, but while Richard Wenk’s screenplay allows for consideration of how that violence effects the characters involved, there is very little complexity in this film and it never really finds a way to properly ride the line between being a serious thriller and a more entertaining one.  Instead we get scenes where Washington explains the meanings behind the books he reads in an effort to knock us over the head with the themes of the film.

That is not to say this film does not have its charms.  Washington may be coasting here, but he does that well enough, given his natural chemistry with most of the other actors.  Additionally, Marton Csokas villainous turn as a one-man Russian clean-up crew is portrayed well enough to make you feel tense when the film requires it, but intrigued by how far into camp territory he may try to go.  It still hurts to realize that he is the only other character with any real depth, but at least the scenes between he and Washington are quite satisfying.  I have less to say about everyone else in this cast, as most of the characters they play are pretty thin and quite dumb when it comes to the villains, but Moretz is certainly growing up fast, even if she’s no Jodie Foster when it comes to teenage prostitute roles. 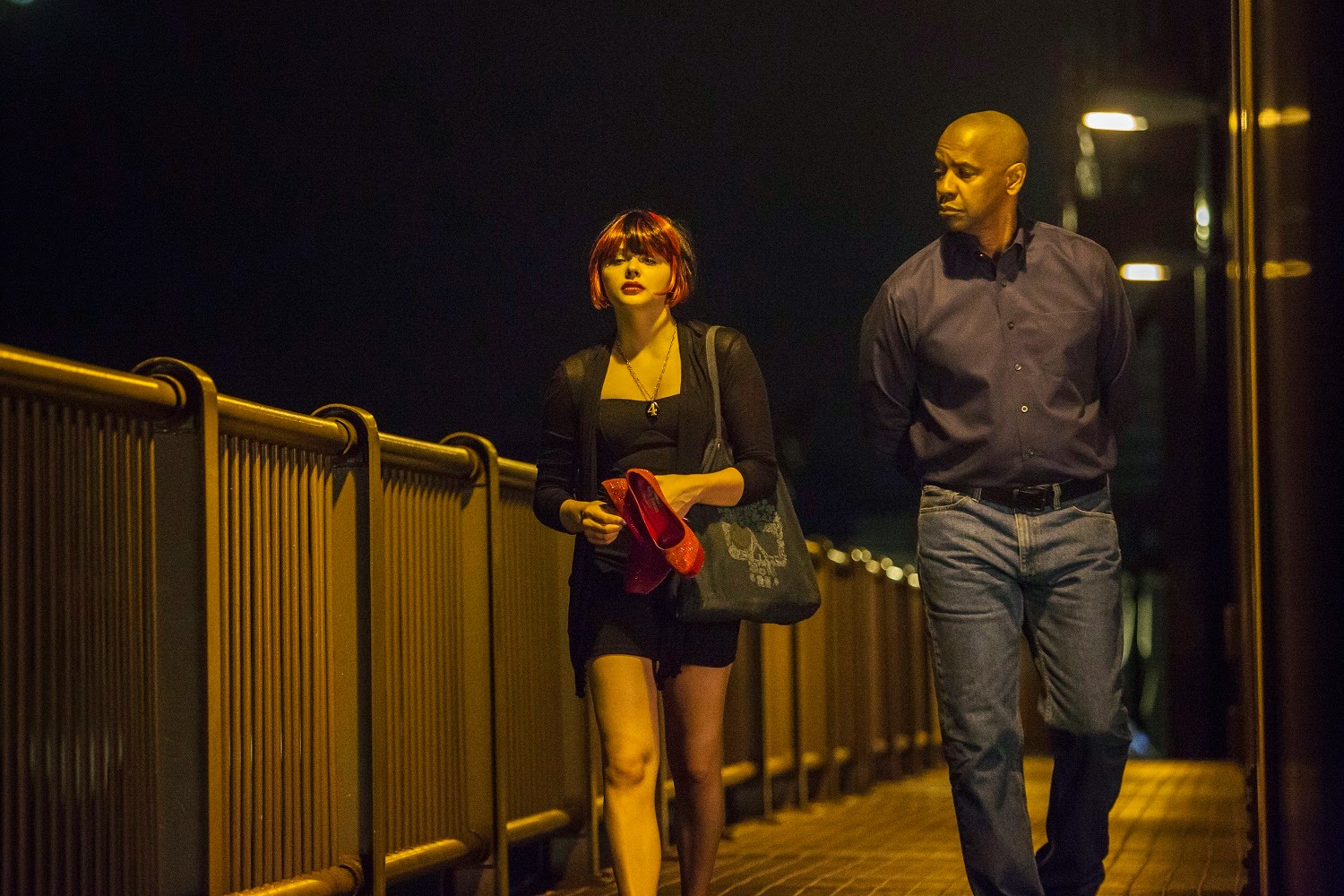 Inside The Equalizer there is a much more fun, pulpy thriller in which Antoine Fuqua uses his very unsubtle direction to create a story about a man fighting the good fight.  Unfortunately, the film pushes the proceedings too far into serious territory, which is undercut by being dull in a lot of spots and having others that feature some absurd violence that includes a finale set in a home improvement story that doubles as a sort of Home Alone meets Saw horror story.  Seeing Denzel kick ass is one thing, but matching it with a level of nihilism that stacks up with Death Wish is another.  Supposedly starring as this character may lead to seeing Denzel Washington make his first sequel.  If that is the case, I at least hope it’s shorter. 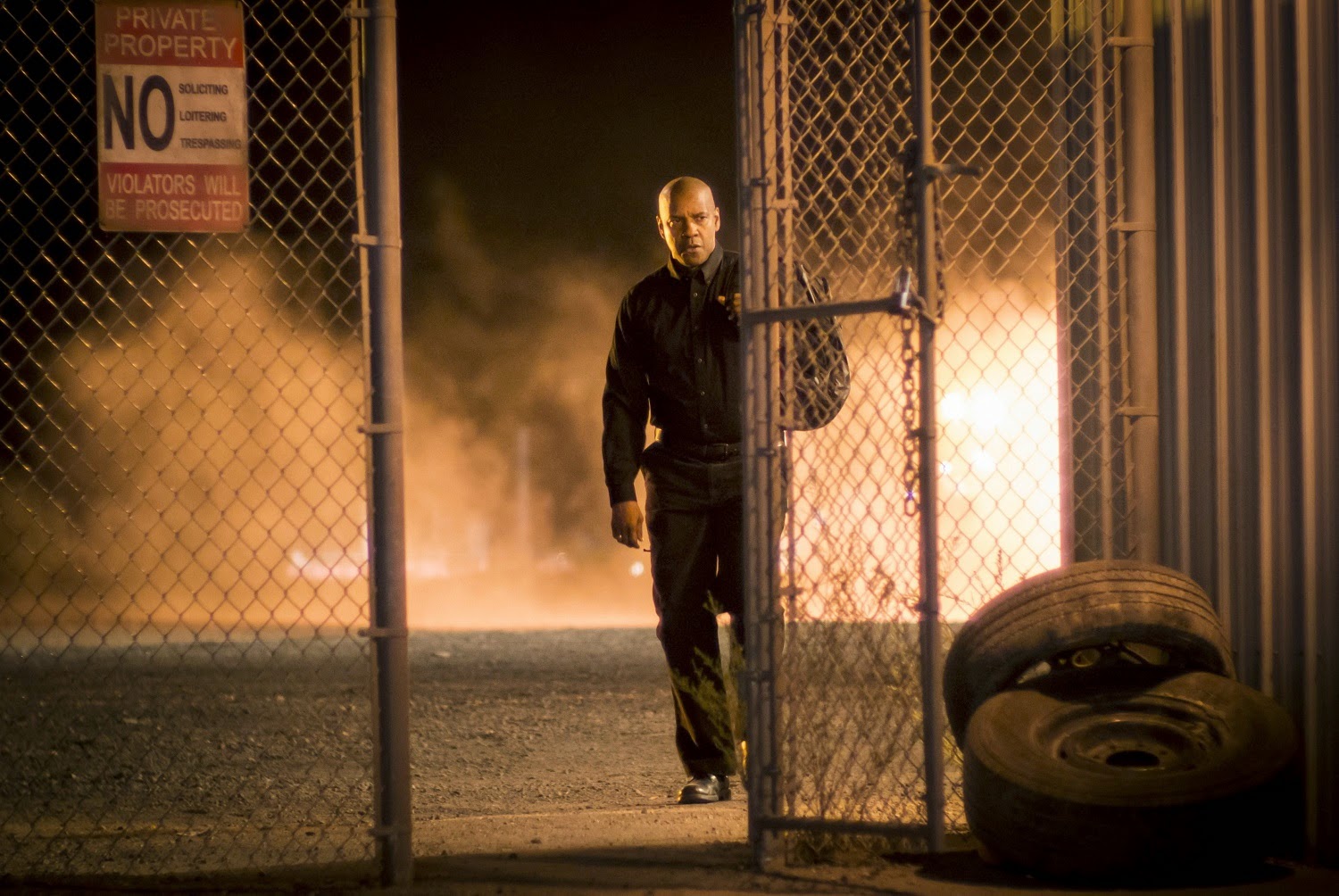