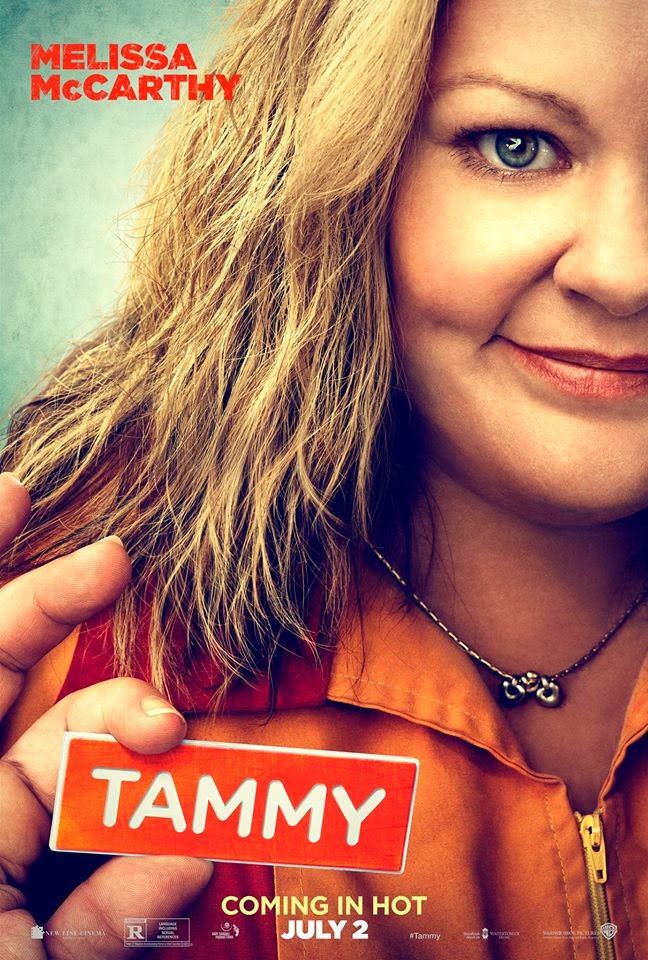 It is unfortunate that Tammy does not quite work overall.  Here we have a character-based, R-rated comedy, featuring a large number of female characters, with ideas that extend beyond big-budgeted set pieces, and it is arriving in theaters just in time for the Fourth of July.  Melissa McCarthy fans may certainly enjoy the opportunity given to her and her husband, Ben Falcone, who directed the film and co-wrote the screenplay with McCarthy, but perhaps not those who are expecting a traditional slapstick comedy. Or maybe it is the other way around.  What Tammy has in character exploration and some actual pathos, whenever McCarthy settles down with her antics, it loses whenever the film amps up its randomness, certain comedy routines, and disjointed plotting.  It makes the film an interesting watch, just not one that I found entirely worthwhile, as a whole. 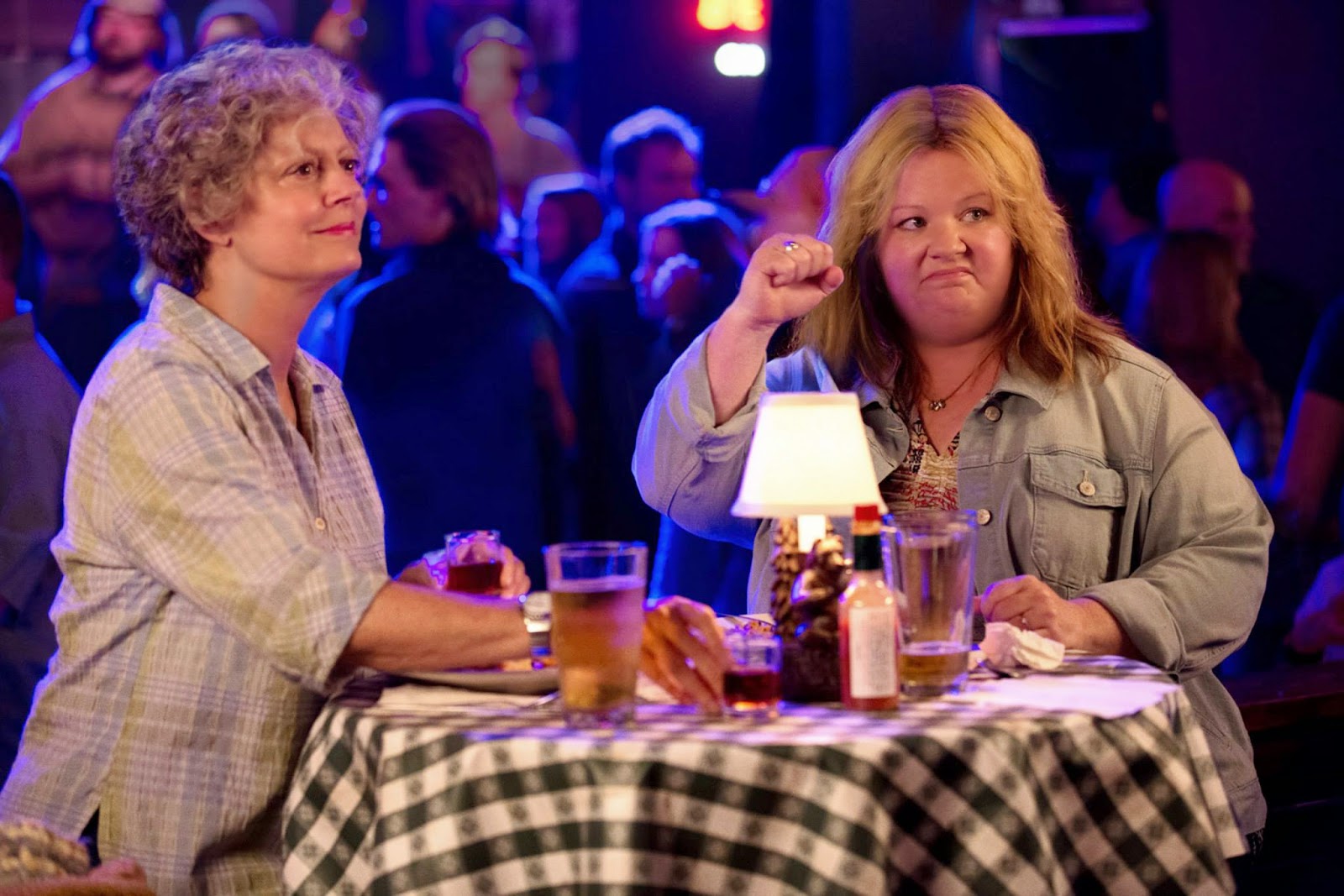 The film features McCarthy as Tammy, a slobbish fast food employee who starts out the film having a bad day.  She ends up losing her car, her job, and her husband.  Her solution is to go back to her parents’ house, who live a couple houses down from her, and drive out of town.  She plans to take her grandma’s car, grandma being Pearly (played by Susan Sarandon), but can only do so by taking grandma with her.  So that is what happens and the film follows Tammy and Pearl, as they go on an inconsequential road trip, which gives Tammy some time to figure out her life as well as do some crazy things with her very game grandma.

Following Bridesmaids, I have not been a fan of the films that Melissa McCarthy has been making.  I don’t know what it is exactly, but she has rubbed me the wrong way.  While she worked for me as a supporting character in Bridesmaids, having to deal with her as a lead character managed to leave me more annoyed than anything.  With Tammy, I actual saw through the shtick and found a character that was sad and lonely.  This does not spell out ‘hit Fourth of July comedy’ necessarily, but it is nice to see the possibility of a more developed persona coming onto the screen.  It does not hurt that I did get some laughs out of the Tammy character. 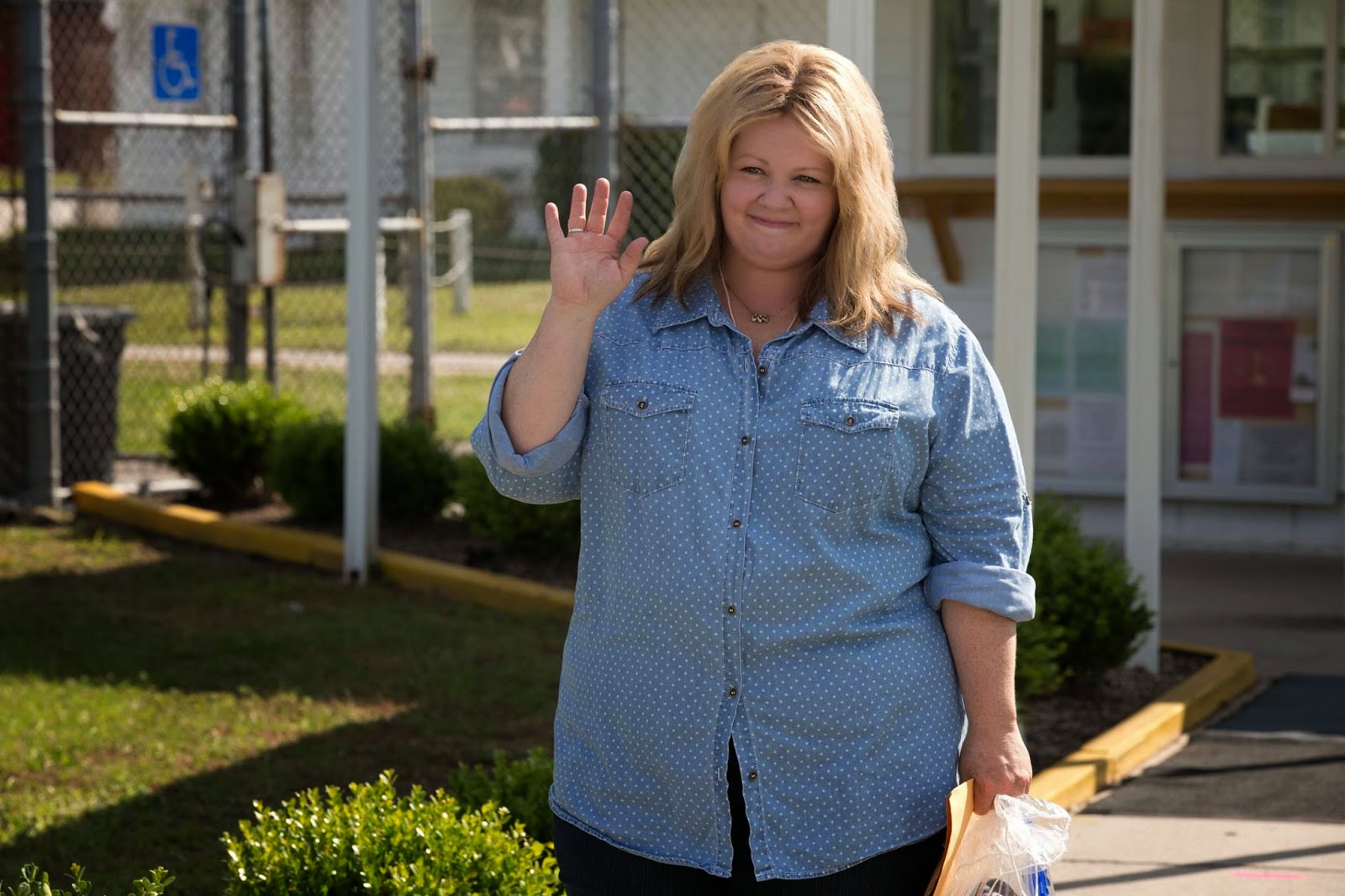 While lacking a solid narrative (Tammy and grandma literally just drive around the same couple areas for the majority of the movie), the dynamic between McCarthy and Sarandon is key to whatever successful aspects you may find in this movie.  This largely comes down to Sarandon being just as much a comedy instigator as McCarthy, rather than something like The Heat, which kept Sandra Bullock mostly in the role of the ‘straight man’/reactionary character.  As Pearl, Sarandon plays the role with a sort of glee that keeps her lively, but with a world-weariness that allows her to be grounded.  She’s also a drunk, which inevitably comes into play, with disastrous results.  Regardless, I liked the chemistry between her and Tammy, but this film still amounts to being about what Tammy needs to do.

With that in mind, McCarthy, does own this film, like it or not, and while I can’t say I was laughing a ton (I wasn’t), I did enjoy seeing some real acting that extended beyond her playing up her image in ways that are both expected and slightly turned on their head.  In many ways, I actually found Tammy similar to the acclaimed 2013 film Nebraska.  The dynamics and overall goals are very different, but Tammy is similarly a sad comedy that relies on how characters have not achieved much and what they have to say for themselves, while going on a silly road trip.  This is why I was happy to appreciate the relationship that develops between Tammy and Mark Duplass’ character. 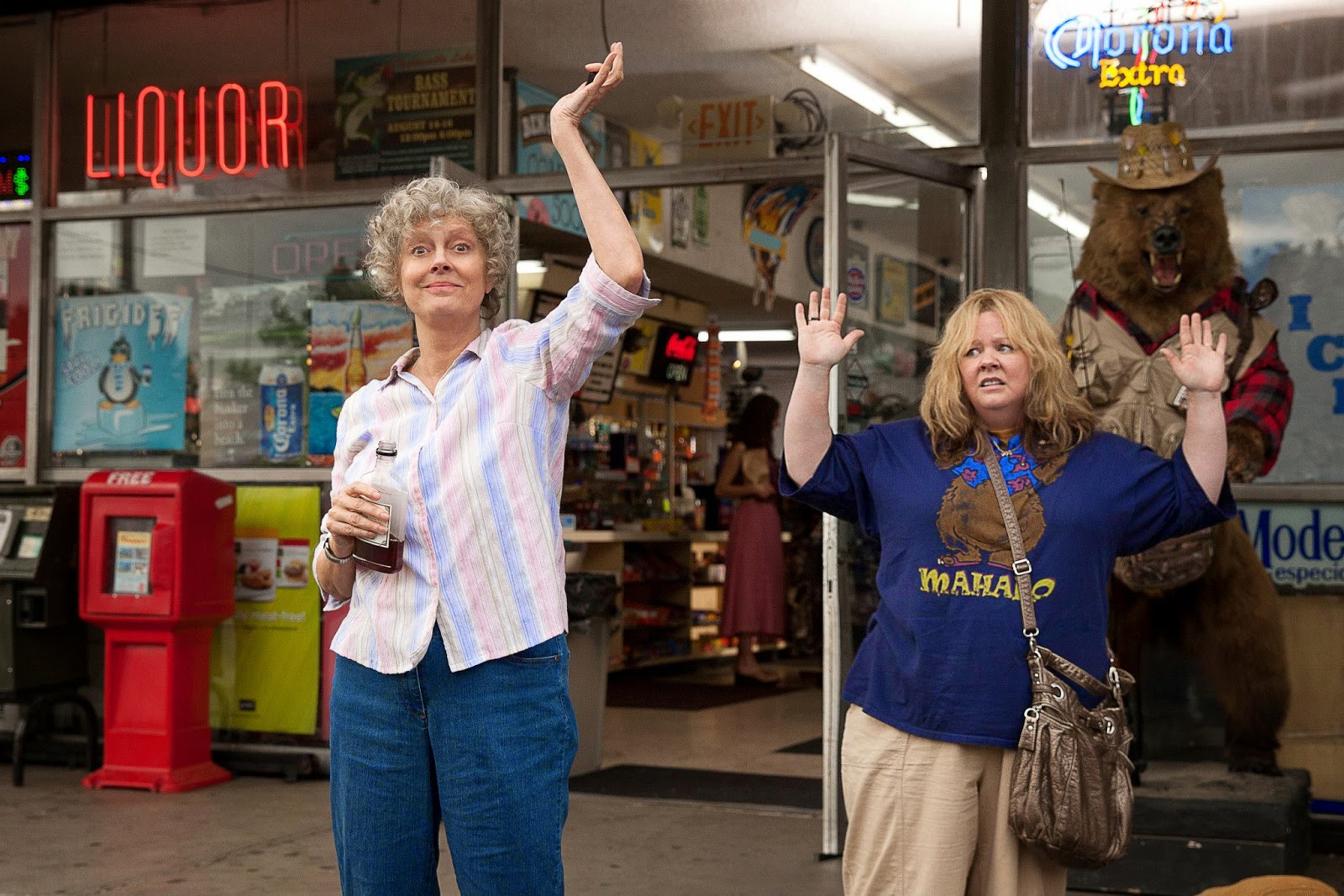 I should mention that this cast is really solid.  Along with Duplass and Sarandon, you also have Kathy Bates, Allison Janney, Sandra Oh, Toni Collette, Nat Faxon, Sarah Baker, the great Gary Cole, and the wonderful Dan Aykroyd.  Most of them are underused (the beauty of Blu-ray extra features these days is seeing what actors earned their paychecks for doing via deleted scenes, though this was a cheap movie, so perhaps they were just happy for the invite), but I will single out Duplass for playing character who seems similarly lonely, like Tammy, and expresses a laid back wit and understanding that works for this film.  Kathy Bates is also fun in this film, while having some words of wisdom that actually come across effectively.

It seems like I am leveling more praise on this film than it may deserve, but I kind of am.  Tammy is a messy film and it is not all that funny, but it nearly makes up for it because of the occasional emotional elements that show the characters as actual humans and not just (bad) joke machines.  This may have not been the best effort for McCarthy and Falcone as a married filmmaking duo, but if they can harness some of this energy and put it into a better film next time, I may be happy to enjoy what is offered in the future. 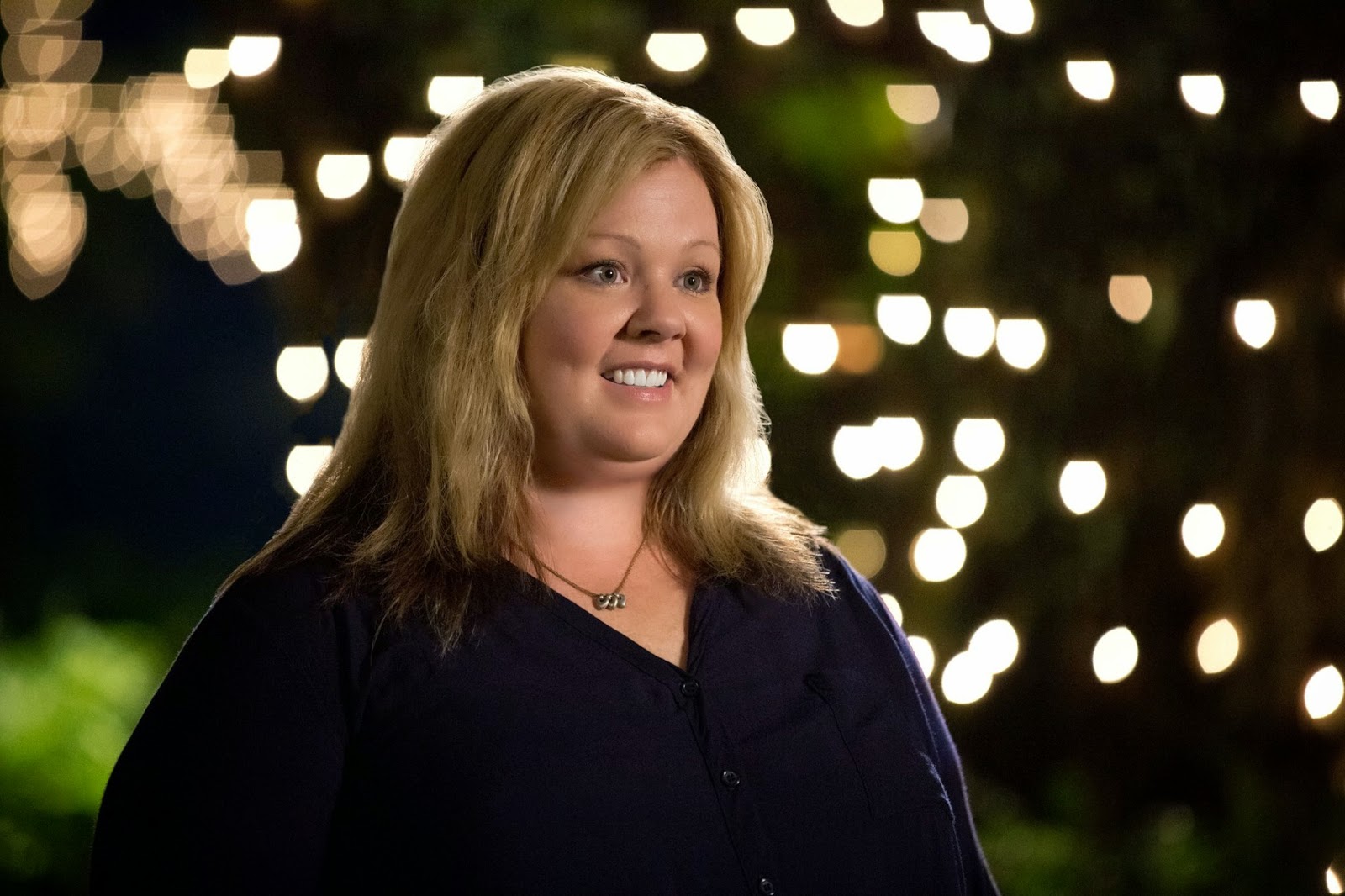