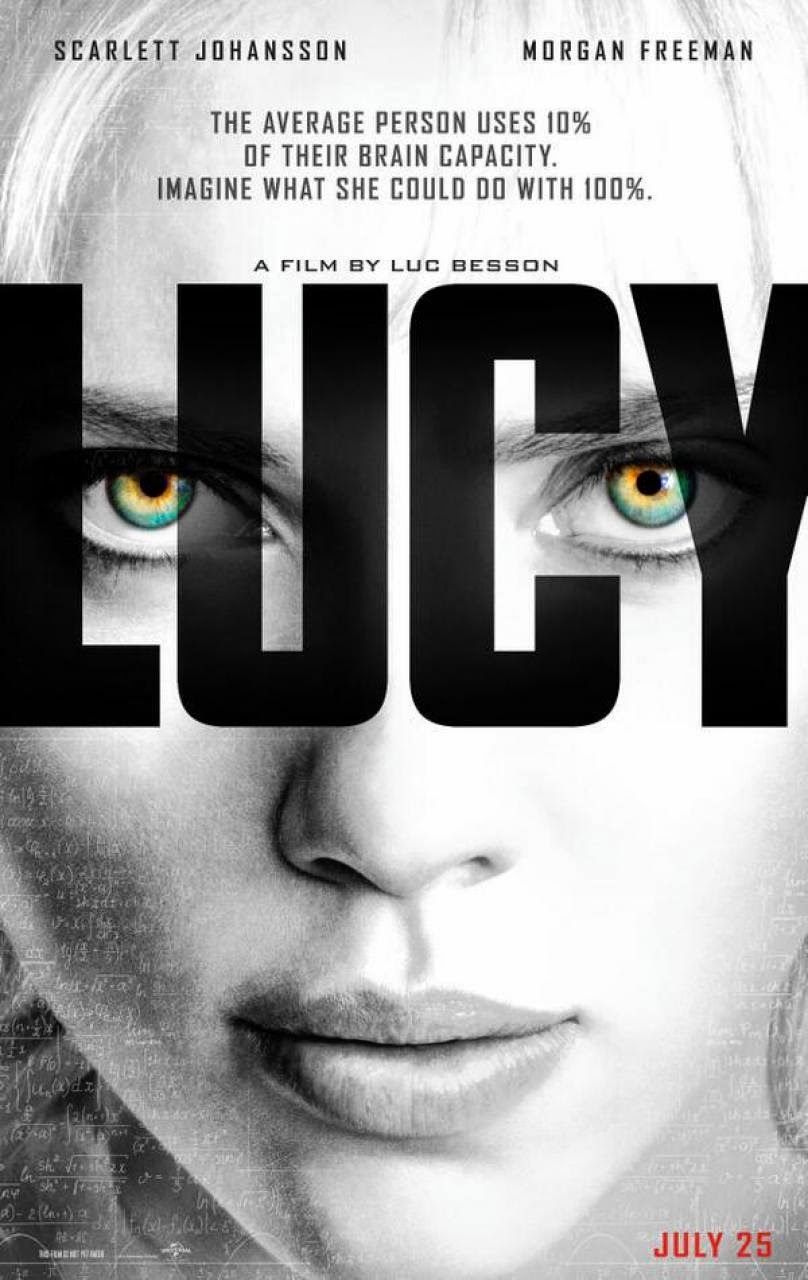 Lucy:  What did you do to my stomach?

In the premise for Lucy, Scarlett Johansson’s character is forced to deliver a package implanted inside of her, only to gain unique abilities after the package is ruptured.  I am sure some kind of variation of that description is what got writer/director Luc Besson the means to make this film as a big studio movie, as opposed to a smaller release.  With that in mind, it is almost as if Besson was able to pull one over on many, as he may have a film built up to be a slick, easy-to-digest, summer sci-fi/action film, but Lucy has more going on than one may expect.  It is unfortunate that the film’s ambition is masked underneath a wavy sense of actual science and Besson’s own penchant for kinetic (and very violent) action beats, but a strong central performance and a very fast pace keep Lucy from ever slowing down in its brief runtime. 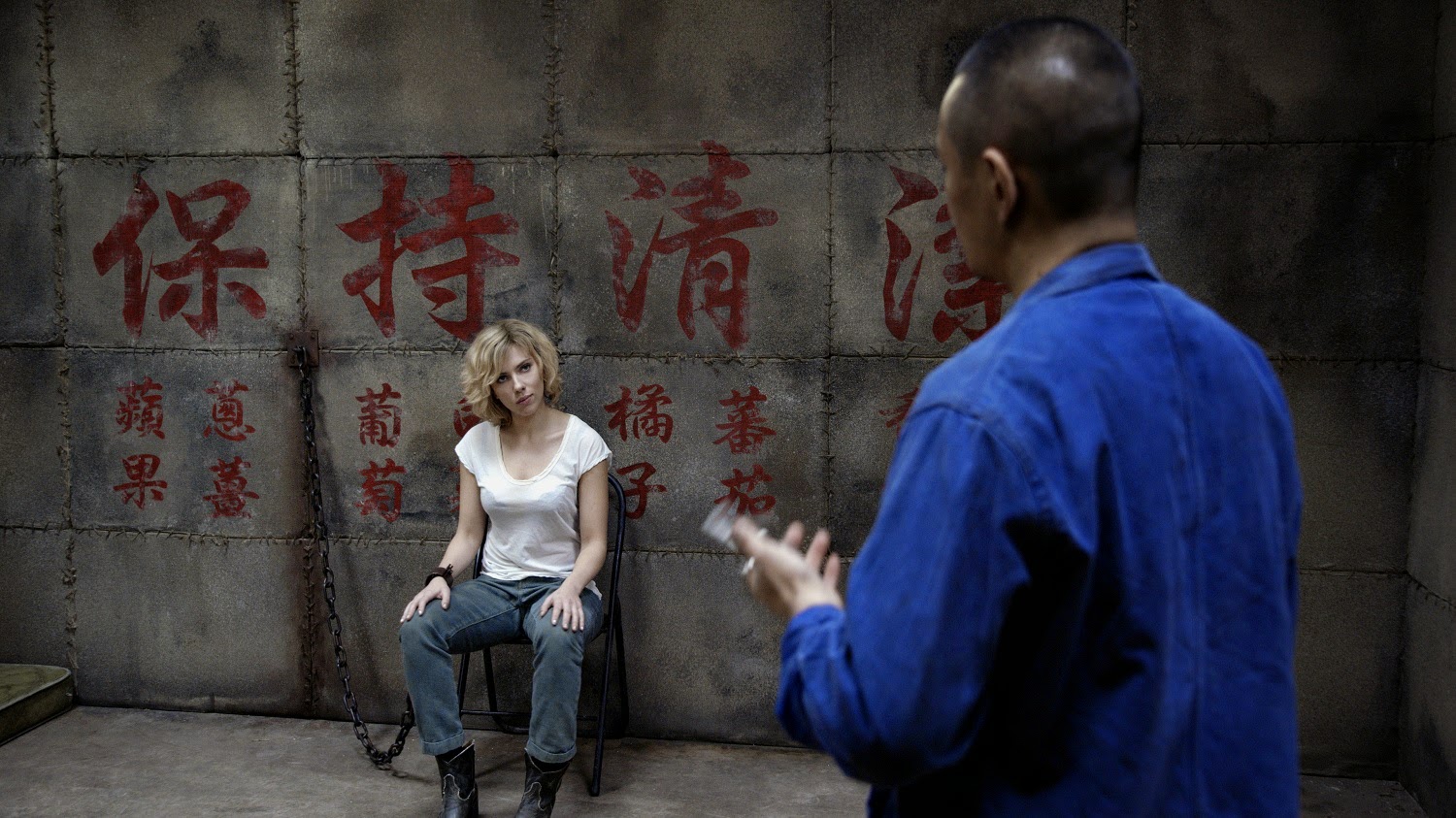 Honestly, I was open to anything with this film.  It has been a while since I have loved anything Besson has directed, though he has written and produced many B-level action thrillers (Taken, The Transporter, ahem…Space Jail), making action stars out of Liam Neeson and Jason Statham in the process.  At the same time, the last features I saw involving someone suddenly getting smarter or wanting to hook themselves up to the world were Limitless, which I shrugged at, and Transcendence, which was a waste of the talents of everyone involved.  If there is something Lucy has a handle on, it is keeping things interesting and at least trying to have fun with its silly premise.

Holding this film together is a job largely placed on Scarlett Johansson’s shoulders.  As Lucy, Johansson does a fine job of letting us share in the initial drama she inadvertently found herself in.  Lucy is forced to be a drug mule, with the package being implanted in her body.  Some excessive violence, which this film has a lot of, leads to Lucy taking some hits to her stomach, causing the drugs to leak into her system, expanding her cerebral capacity.  Yes the movie relies on the old idea that humans only use 10% of their brains.  Regardless of the validity of this idea, the film runs with it and basically tells the audience to go along with it too.  That is what happens when Morgan Freeman delivers exposition, you just have to buy what he is selling. 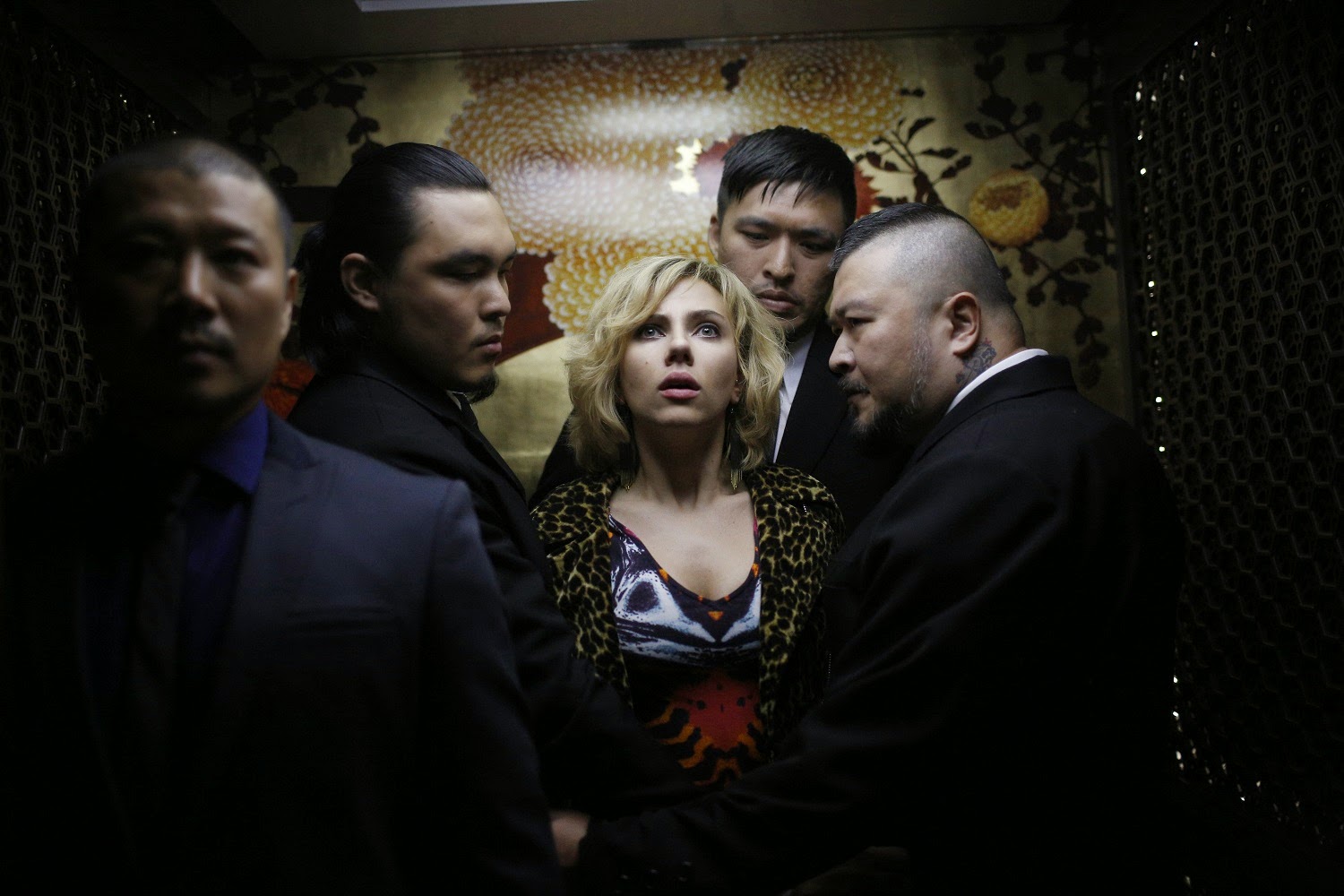 Getting back to Johansson, while a majority of the film relies on her being emotionally cold, as she becomes more and more aware of her superhuman abilities, causing her to shed her humanity in the process, there is a standout moment that basically lets us accept that this is where she is headed.  While having some surgery done (which causes her no pain), Lucy makes a phone call and is able to express everything she is going through with an effective level of emotion.  While this is not a deep character drama, Johansson is the kind of actress that can add a level of credence to a B-movie like this to at least have you empathize enough with what is going on for her.  With that in mind, the pace of this film is so relentless that one hardly minds the lack of character depth, based on what we are given.

While this film puts up a lot of big questions with its premise that is full of ideas, my biggest curiosity is what Luc Besson wanted to achieve overall.  At 82 minutes without credits, I wonder if there is more to this film Besson (or a studio) took out or if he really just wanted to settle on a film that has some neat ideas, but buries it underneath gratuitous action that feels especially gratuitous, given all that Lucy is capable of.  This speaks most to the ending, which I can easily see being described as the point where Lucy goes completely off the rails, which is sort of true, but I can’t say I was not intrigued by what was being presented. 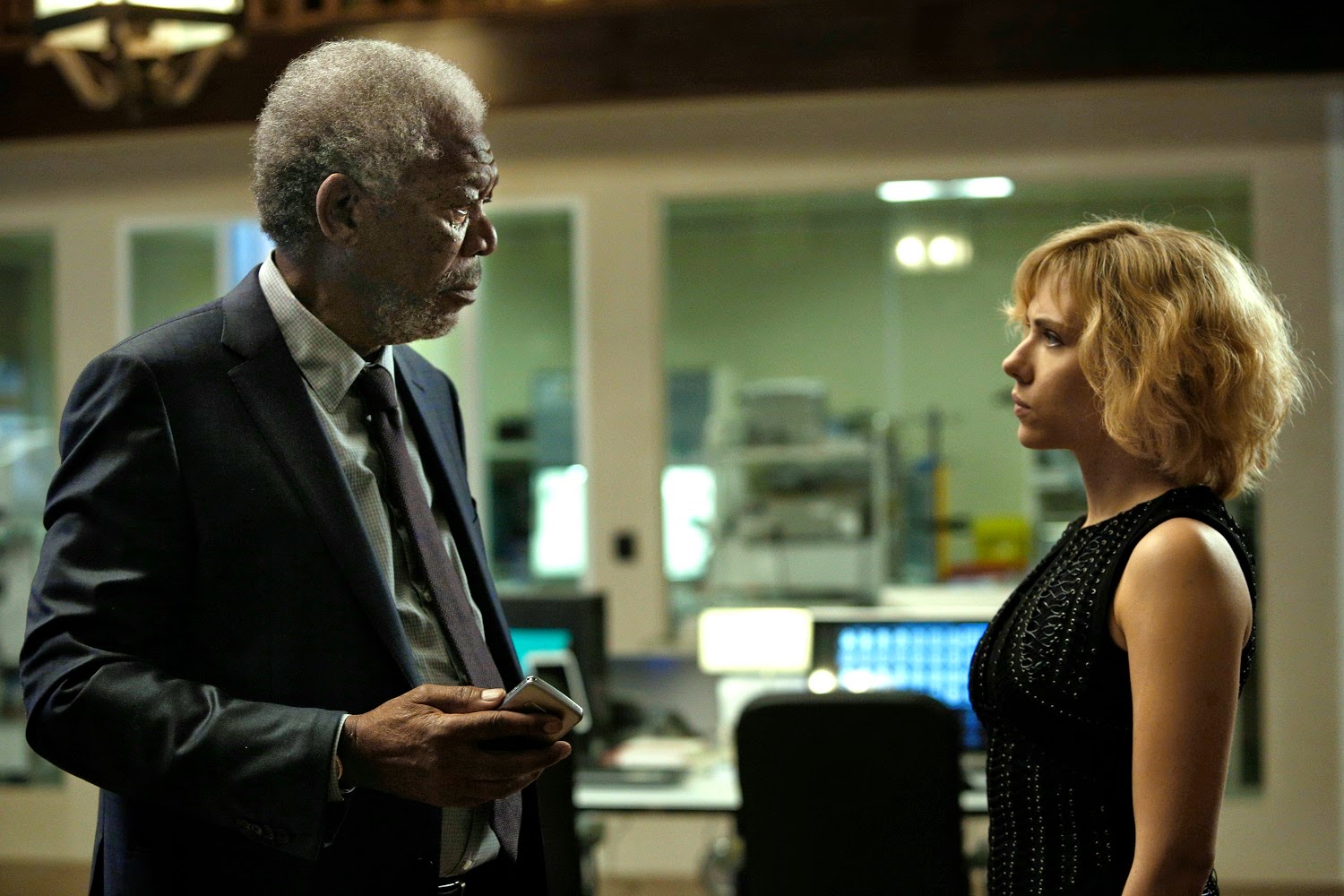 Speaking to the film as a whole, it certainly has a slick look to it.  Filming all over the world, in locations including Taipei, Paris, and New York, the film has a lot of sights to see and Besson and his regular crew, which includes cinematographer Thierry Arbogast and composer Eric Serra, do their best to make it look and sound like a Luc Besson picture.  The film has a matter-of-fact way of depicting violence, a strong female lead at the center, and a disregard for the more-or-less PC way sense of morality.  Besson’s frequent use of stock footage and other visual cutaways to serve as visual metaphors was a neat touch as well, to an extent, but all of these elements make for a film that may have a ridiculous premise, but at least feels different and held my attention.
Really, the most commercial aspect of all of this is the unnecessary gangster stuff; with Oldboy star (among many other Korean films) Choi Min-sik doing his best to channel Gary Oldman from other Luc Besson films like Leon and The Fifth Element.  I get the use of this as a setup, but the film banks on the gangsters working as a go to in order to keep the chase aspect up, I guess, which leads to action beats that are fun to watch, perhaps, but unnecessary when dealing with a story involving a person harnessing mind powers.  Of course, if Luc Besson ever had a desire to channel 2001: A Space Odyssey, this seems to be about as close as he could get. 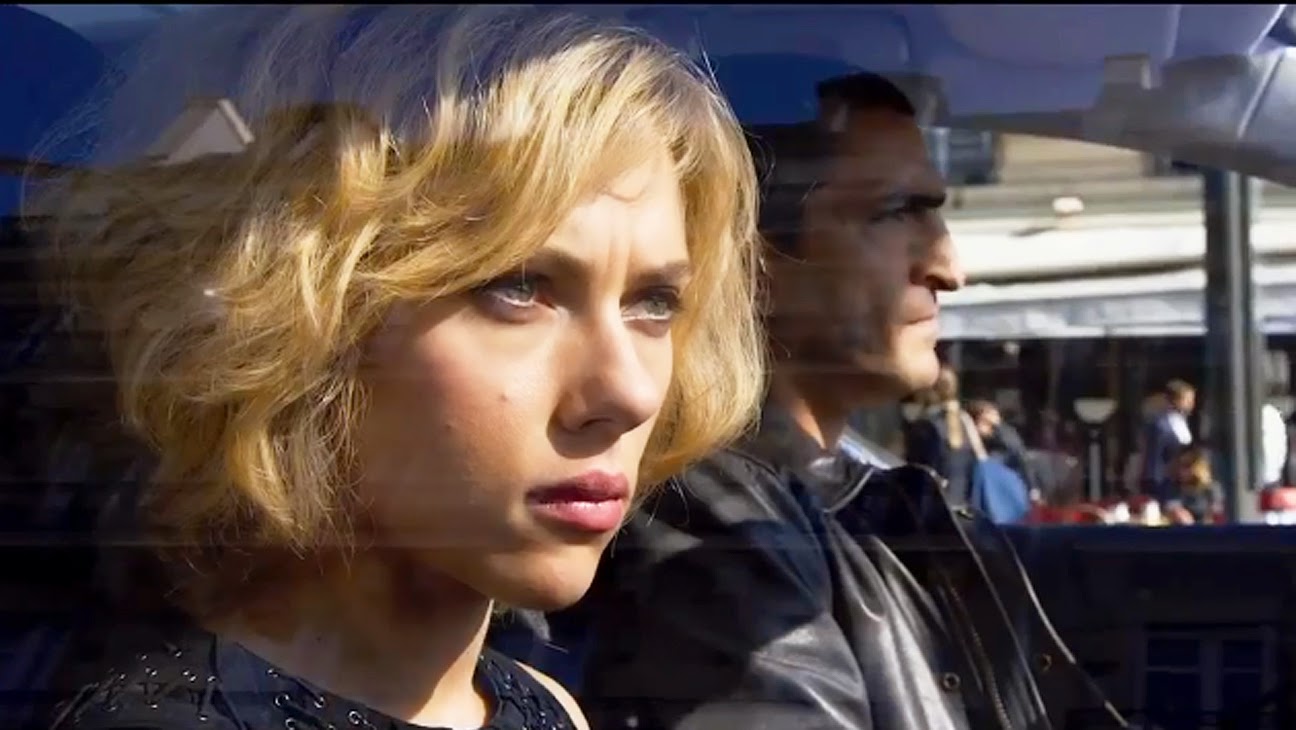 I took away mixed feelings about Lucy, but because it actually feels sort of unique, compared to a more generic version of this film (despite my complaints about the action beats, which again, are well handled), I am not frowning on having seen the film, just the fact that it seems to have bitten off more than it can chew.  Still, in the midst of many big summer spectacles, a fast-paced and short little genre slice, with a solid lead performance is acceptable enough.  It is certainly a neat counterbalance to Johansson’s other trippy sci-fi film from earlier this year, Under the Skin.  Lucy may dabble in the smarts, but it delivers on being silly entertainment.

Del Rio:  What happens when she reaches 100%?
Professor Norman:  I have no idea.

Aaron is a writer/reviewer for WhySoBlu.com.  Follow him on Twitter @AaronsPS4.
He also co-hosts a podcast, Out Now with Aaron and Abe, available via iTunes or at HHWLOD.com.
By Aaron Neuwirth
2014 Films Action Choi Min-sik Luc Besson Morgan Freeman Scarlett Johansson Science Fiction summer movies
Reactions: