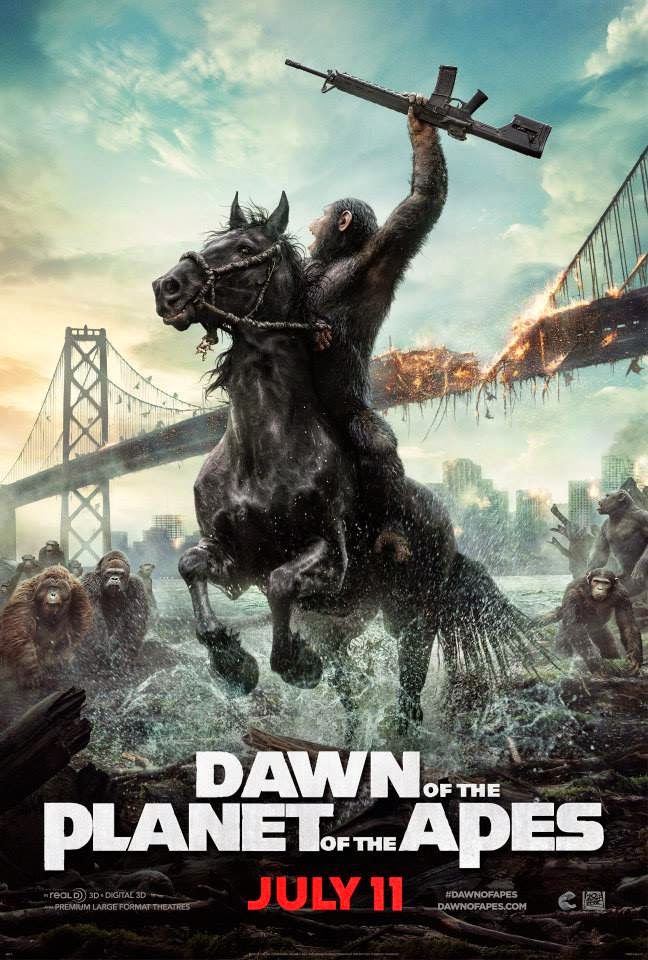 The only thing more complicated than the time traveling plotline of the original Planet of the Apes franchise is realizing that Dawn of the Planet of the Apes is the sequel to Rise of the Planet of the Apes, the reimagining of the fourth film in the previous franchise, which took place before the first film, chronologically.  Relieving the stress of such complications is the fact that ‘Dawn’ may be the 8th film in a long running series of ‘Apes’ movies, but it stands very close to the top, nearly outdoing the Charlton Heston classic.  This is a summer movie that is not afraid to embrace the idea of keeping the damn dirty humans in second tier positions, while Andy Serkis, the other actors, and the fantastic visual effects team at Weta Digital do tremendous work at not only creating what appears to be living, breathing apes, but well-developed and empathetic characters.  Along with a clever script and some ace direction, Dawn of the Planet of the Apes is another very strong entry for the 2014 summer season, let alone a fine sci-fi spectacle. 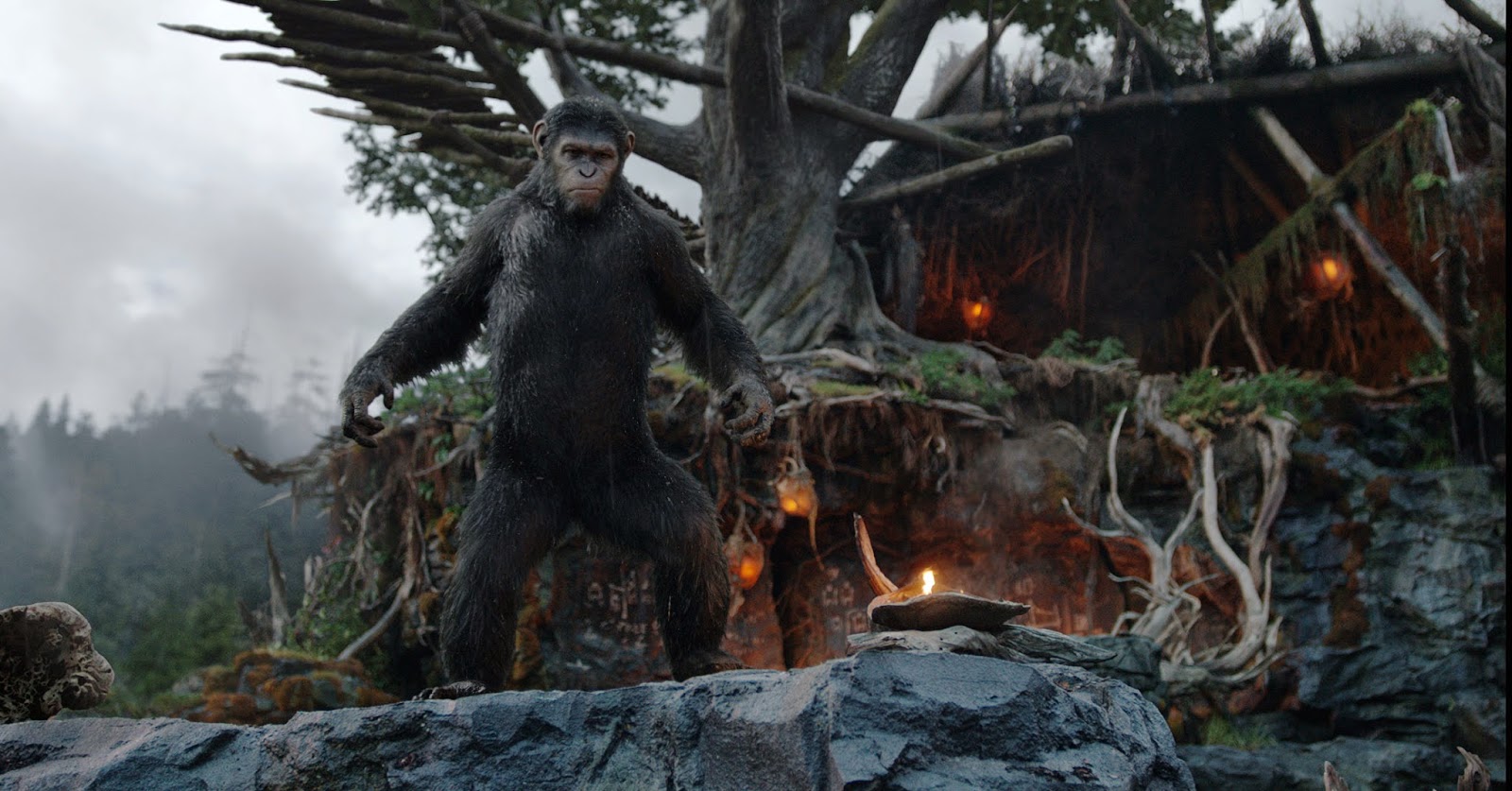 Dawn picks up ten years after the events of Rise.  The film has a nifty recap, but as some may recall, along with Apes gaining a level of intelligence, humanity faced a global downfall, thanks to a side effect of the drug humans tried to create, in effort to cure Alzheimer’s disease.  As a result, only so many humans remain on the planet, while Caesar (Andy Serkis) and his band of apes (an understatement of their numbers) have continued to take refuge in the forests of Muir Woods.  It is just outside Muir Woods in what remains of San Francisco, where we keep track a band of humans looking to do what they can to turn the power back on in the city.  Jason Clarke’s Malcolm leads a band of humans (including Keri Russell as Malcolm’s wife Ellie and Kodi Smit-McPhee as his son Alexander) to the woods with hope of fixing the issue, though that means interacting with the apes, who are not so willing to trust humans.  As the story moves forward, it comes down to a power balance between those who understand the benefits of peace and reason versus those with desire for control, driven by anger and fear.

It is clear that everyone involved in this film, including director Matt Reeves, who steps in for Rupert Wyatt from the last film, understood that the shift of focus from James Franco’s human character to Andy Serkis’ ape character in Rise led to great success.  Having that clarity has led to a film that is very happy to push the humans into supporting roles, in an effort to showcase the quality of the visual effects, where we can see our lead performers in the form of ape characters, yet convey plenty of characteristics that make them far more human-like in terms of the depth of their personalities, compared to many much more shallow films with an emphasis on spectacle.  It truly is a wonderful combination of computers, writing, and acting that makes these ape characters come to life so effectively and certainly a solid argument for how visual effects can aid a film.  Much like how Serkis and Peter Jackson were able to do with Gollum or how James Cameron and Zoe Saldana (among others) were able to accomplish with Avatar, the use of motion capture and the latest in visual effects technology can go a long way in shaping characters in a film, though it is not as if this is replacing the presence of flesh and blood actors, just adding to an ever growing landscape of possibilities. 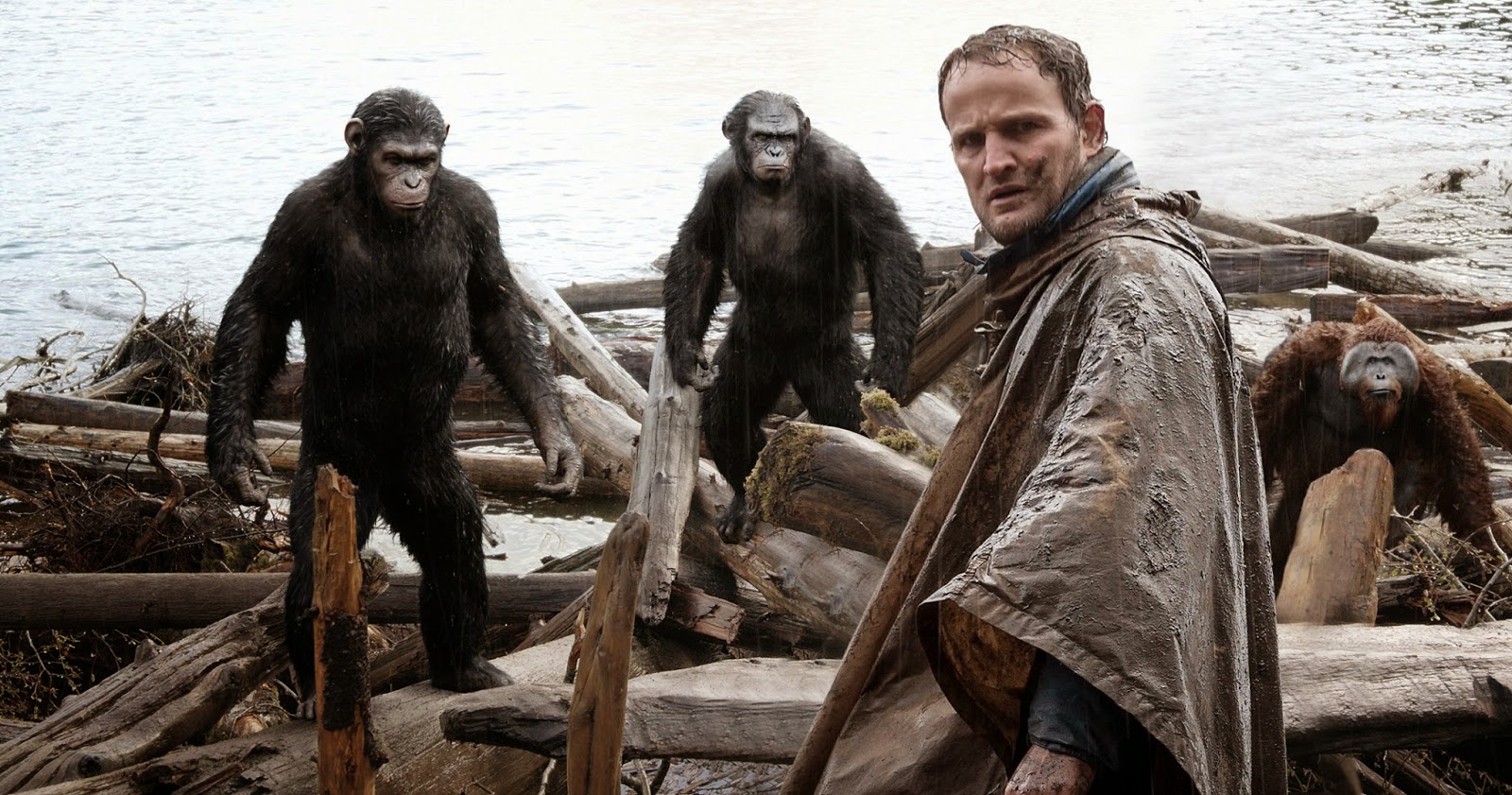 Keeping that in mind, this film simply rocks in what it is doing.  We get to witness a film dealing with societal struggles under the guise of an action/sci-fi flick and I love how it plays out.  On the apes’ side of things, Caesar is fine leading his community, but you have a character like Koba (Toby Kebbell), who was the subject of human testing, with a rage that has built inside him, when it comes to the presence of humans and what they are capable of.  Much of the film revolves around whether or not Koba will go over Caesar’s head and ignite a war between the apes and the humans, but there is enough complexity in what we see in this film that it rarely feels cliché and instead works in understanding and unfortunate circumstances to propel the story forward in an organic way.  Dawn is very happy to make all of this work by having scenes focused solely on apes that use sign language and minimal dialogue, and it is a credit to the filmmakers that they can make this work so effectively.

On the other side (the human side), Gary Oldman’s Dreyfus character is in charge of keeping the people safe, as he and Malcolm are the ones that founded the safe haven built for the surviving humans.  While I cannot say that Dreyfus (let alone most of the humans) have much of a character arc or personality, beyond some understandable qualities, which I believe is done very purposefully, there is enough there to provide an understanding of where he and the other humans are coming from.  There is a fear and anger residing in the humans who are clearly at fault for their own demise, but still see apes as a threat for reasons that are fairly understandable. 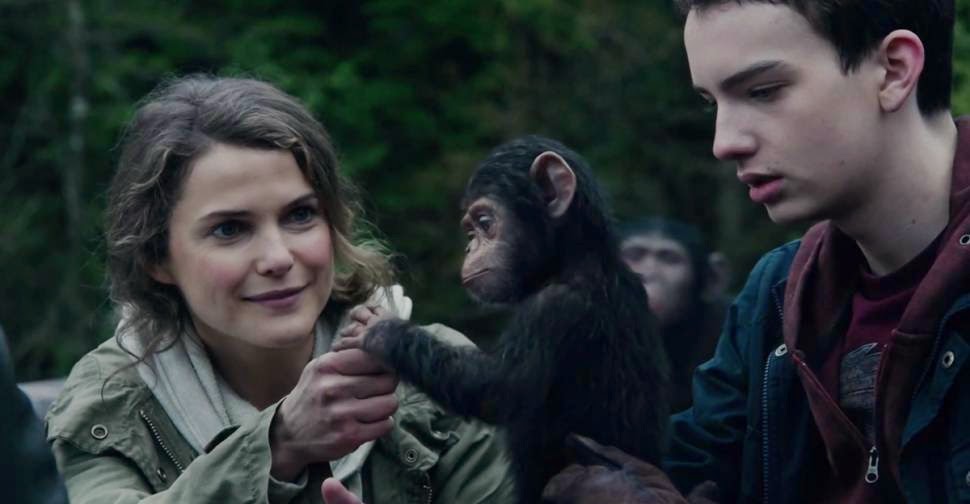 Additionally, there is a clear understanding that this is a big summer movie and as such, Dawn does deliver on having plenty of action to go with its dazzling visuals and character-focused plotting.  Fortunately, the film also manages to go in certain directions that played better than how some may have expected.  Apes most certainly have a face off against humans, but again, it all comes down to the power struggle, which is more focused from within.  With that said, Reeves and his team do manage to build plenty of tension, maintain a level of fun amidst this post-apocalyptic world everyone resides in, and provide some very creative and exciting action sequences.  I should note that the film was shot in 3D and while many can take or leave the format, I am happy to say that it works well into this picture, given how Reeves and his cinematographer, Michael Serisin, take to playing with the depth of field in several instances, leading to a number of very impressive long takes and imaginative ways to depict certain sequences.

The film is not perfect, as, just like Rise, Dawn has an issue with providing at least one character that is written to be nothing but trouble, yet is continually included for the sake of having certain story turns take place.  Along with a third act that relies on certain familiar elements and a couple leaps to take in an effort to justify the way things play out, Dawn is not entirely a film that rises above convention, but there is still so much ambition and ingenuity in an effort to make this film work (let alone a scene featuring apes on horseback with assault rifles) that it is hard not to be awe-struck by this film in instances, let alone appreciative for matching its creativity with strong characters (that are mostly apes). 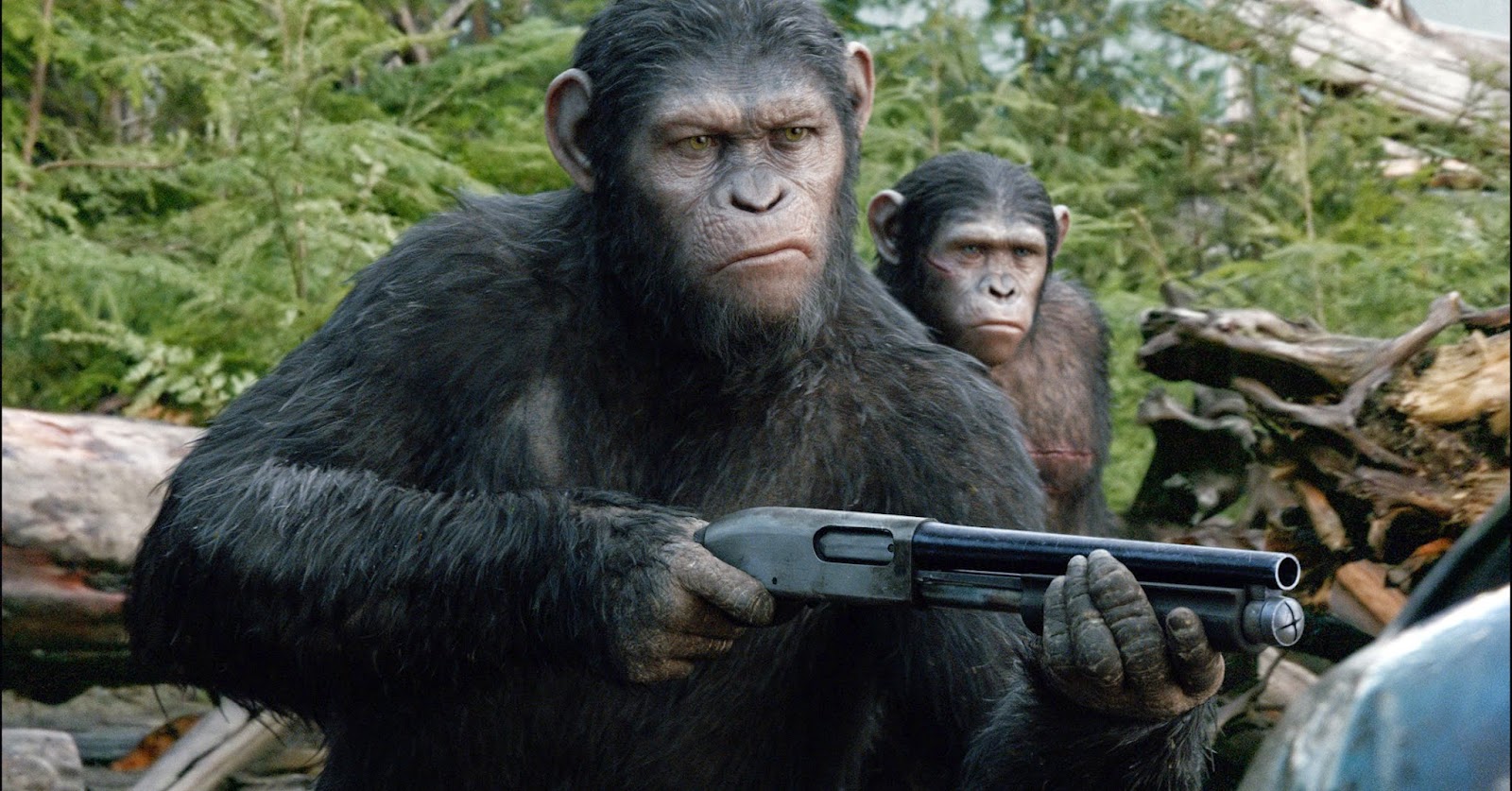 I want to bring it back to Andy Serkis.  While Jason Clarke does fine as the de facto lead human character, Andy Serkis is just a force of nature, adding plenty of personality, gravitas, a conflicted nature based on how to lead, and other elements, let alone his contributions as a filmmaker behind the scenes.  Sure, I will always have an admiration for the practical make-up and costume work to make the original Planet of the Apes succeed in the way it did (along with just being a well-made film all around), but I am happy to put so much effusive praise behind a lead performance that comes from a man wearing a digital monkey suit too.  Dawn of the Planet of the Apes is a grand accomplishment for many reasons and not even the complicated continuity of this franchise as a whole should stop anyone from appreciating this summer spectacle done so right.

Malcolm:  We need to give them a chance. 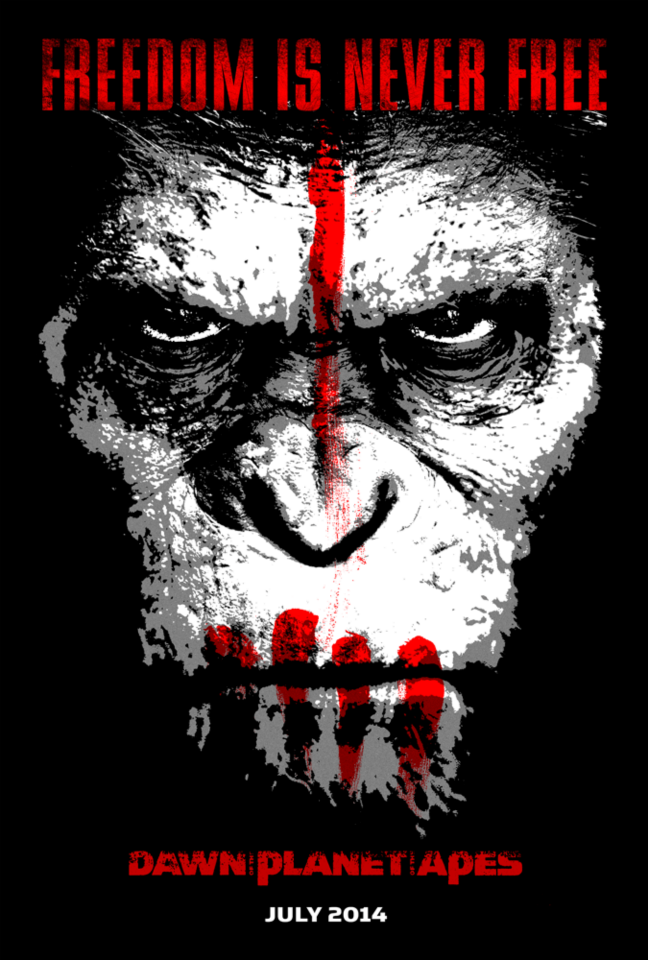 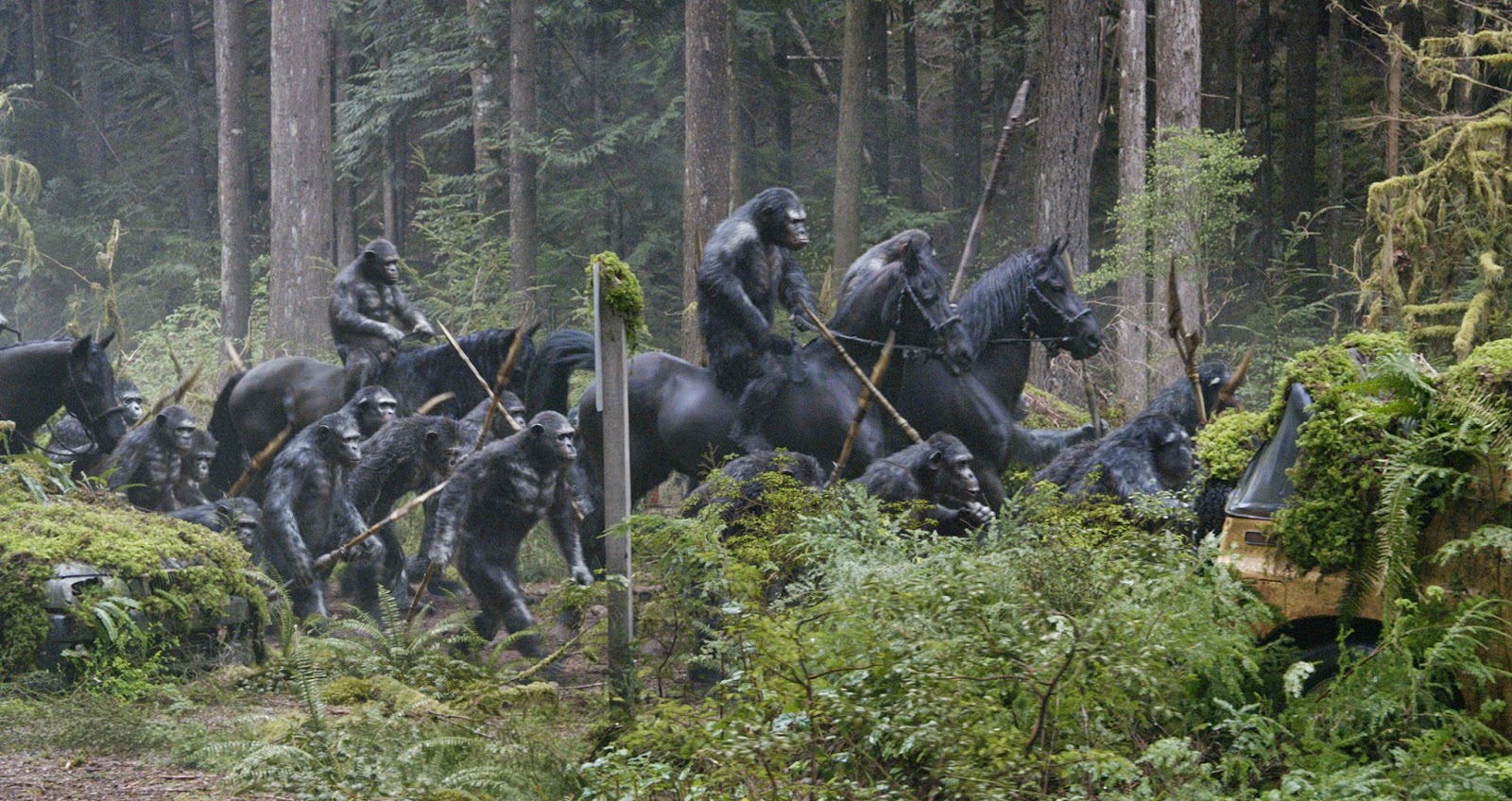 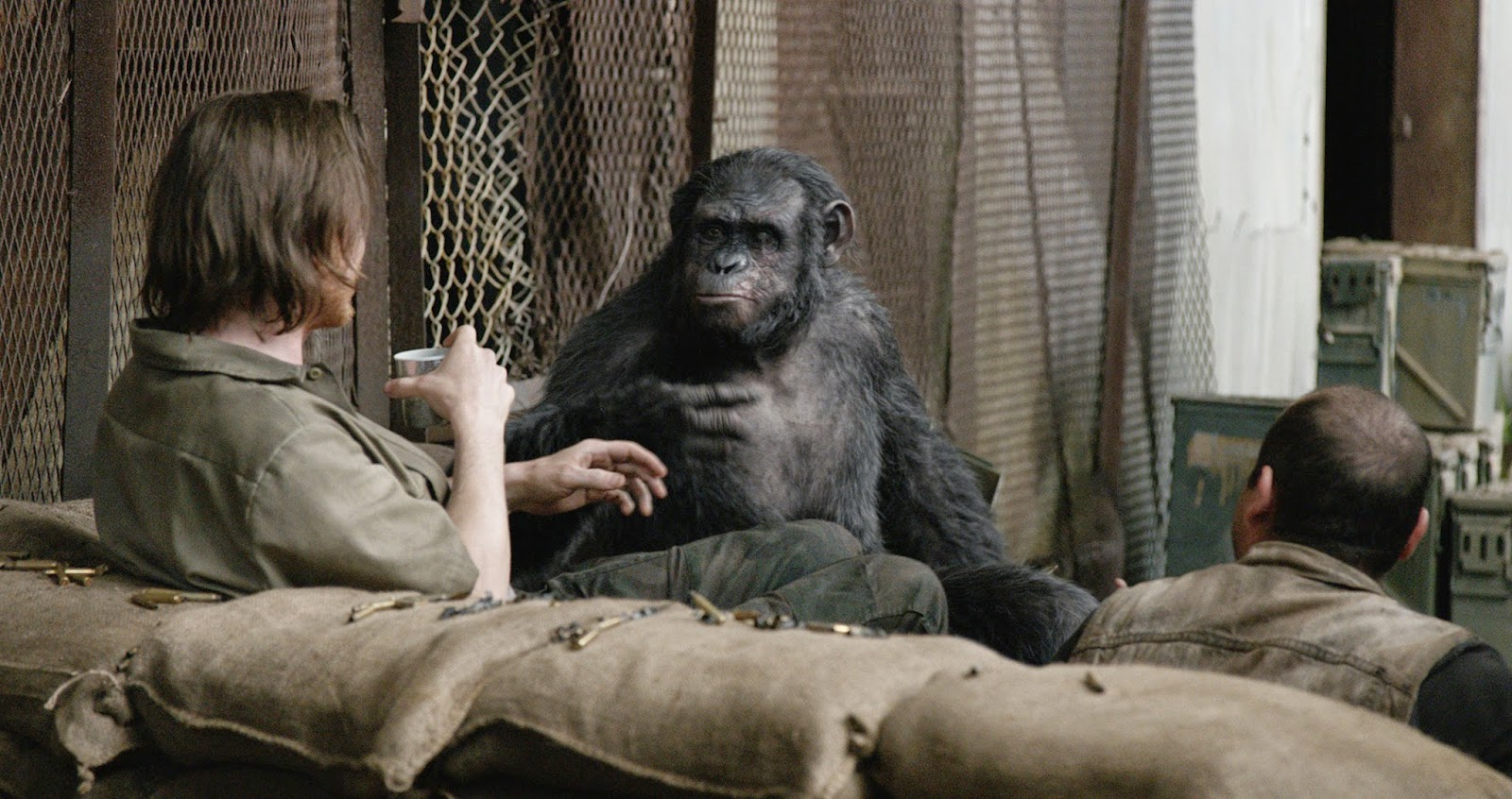