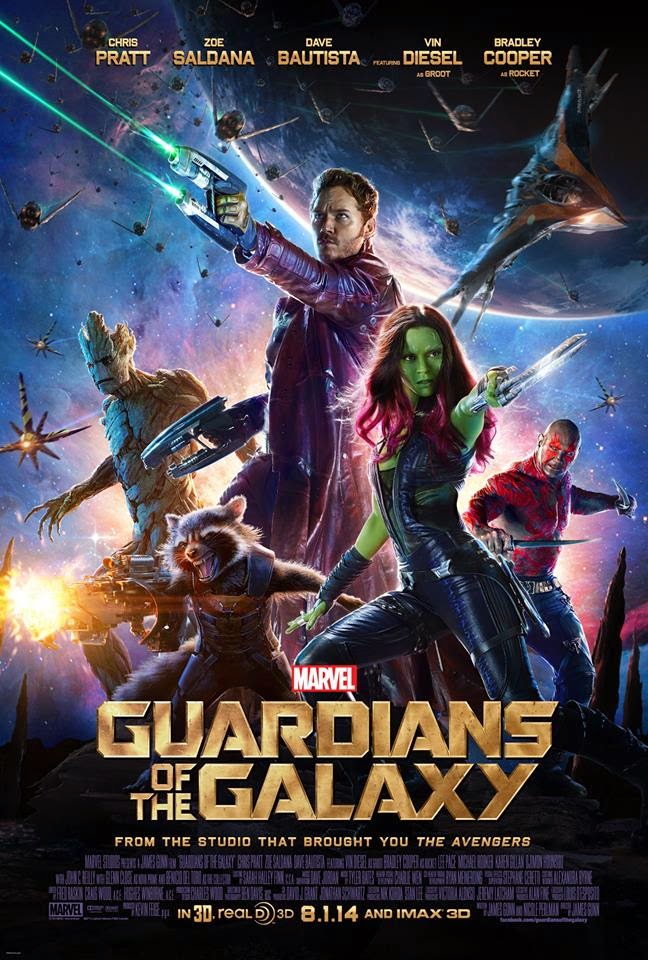 While the word is out on what the future holds for the films from Marvel Studios, they are currently in a place of comfort, as the films produced are consistently entertaining, despite fitting into familiar structures.  Given that the films all have reasonable budgets and lots of talent both behind and in front of the camera, it is not too much of a surprise that audiences generally really enjoy these movies.  Guardians of the Galaxy is both the wildest step yet for Marvel and the biggest risk since 2008’s Iron Man, as it is based on an obscure comic property and lacks huge name stars in the lead roles for audiences to be easily sold on the film.  With that in mind, Guardians of the Galaxy will be a real test of the Marvel brand.  It helps that the film is very good.  It may only break some new ground, given the setting and style of the film, but even while fitting into a familiar mold, it is a total blast of space opera-style joy. 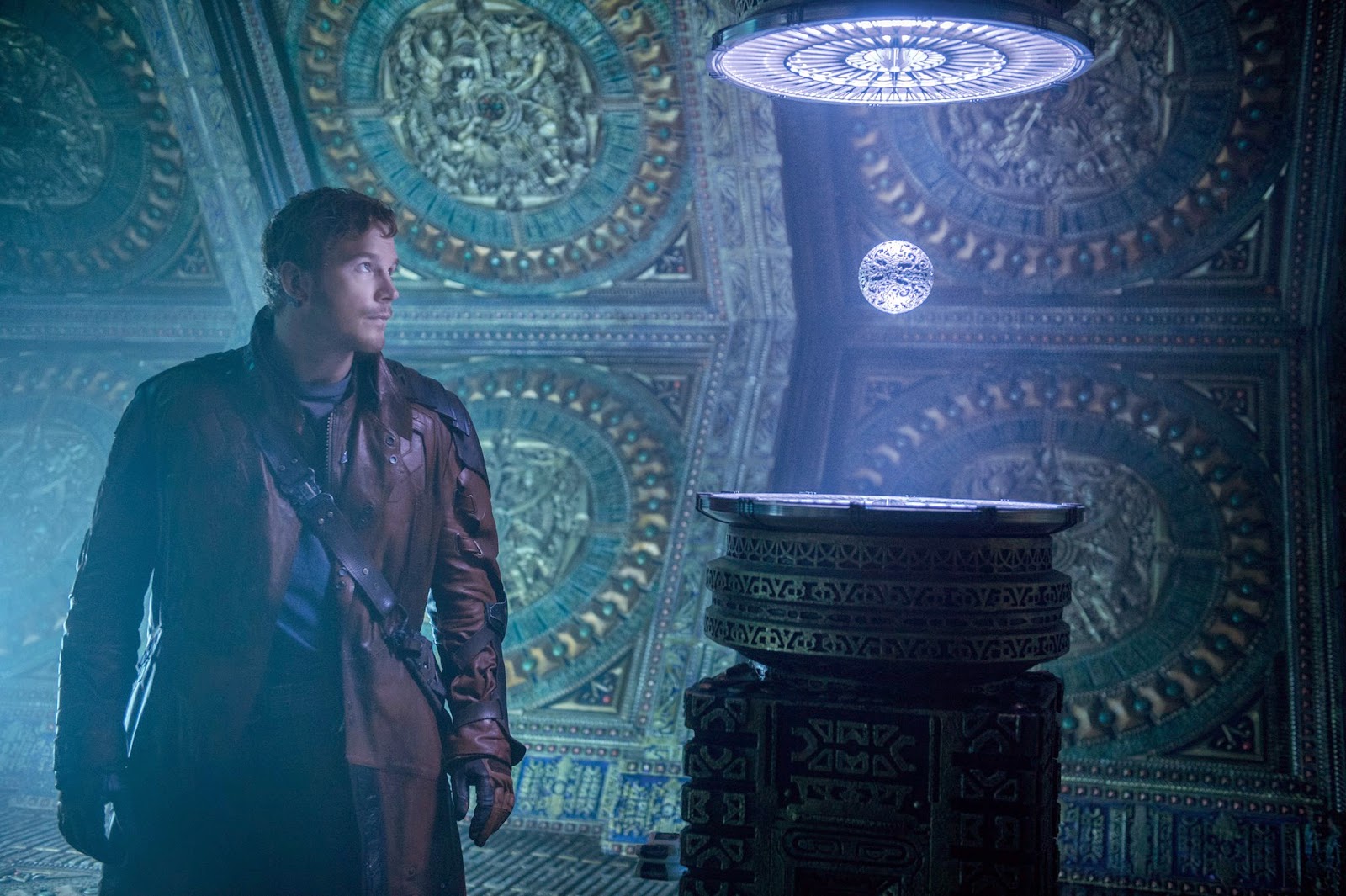 It is seeing a film like Guardians come to life that makes me wonder how much Disney needed to buy Star Wars.  Given that The Avengers is one of the biggest films of all time, the Mouse House has been doing very well for itself; enough so to make a film like Guardians of the Galaxy, which is basically a test of whether or not Marvel could pull off a Star Wars film.  Here is a film that has the task of setting up a wide variety of characters and worlds, based around an adventure story, with enough humor and flavor to keep audiences interested.  That is exactly what we will need to see in the upcoming Episode VII, but we have now already been given that, albeit there are no lightsabers in this Marvel adventure.

While the Thor films were previously the weirdest films in Marvel’s cannon, given the movement to other realms, Guardians goes a step further by keeping audiences out in deep space, learning about all sorts of life existing in far stretches of the galaxy.  This is a film that is happy to feature spacecraft battles, intergalactic councils, alien artifacts, and other sci-fi elements.  Most notably, Guardians is a film that features a genetically engineered raccoon (Rocket, voiced by Bradley Cooper) and a 9-foot tall tree-like creature (Groot, voiced by Vin Diesel) as two of its lead characters.  If Guardians is going to get knocked for keeping itself within the bounds of a proven formula, it at least knows how to make it look and feel like a very offbeat version of it.

The true lead character is Peter Quill aka Star-Lord (a name known to himself mainly) played by Chris Pratt.  Quill was abducted from earth as a boy, only to grow up and become an adventurous and mischievous space smuggler.  His smart-ass take on an Indiana Jones adventure at the beginning leads him into the main plot of this story, as he steals a token that is wanted by many.  For various reasons, Quill eventually finds himself teamed up with the aforementioned Rocket and Groot, along with a green-skinned assassin, Gamora (Zoe Saldana), and an angry alien warrior seeking vengeance, Drax the Destroyer (Dave Bautista).  All of their paths lead to one villain – Ronan the Accuser (Lee Pace), who is hellbent on using the artifact in Quill’s possession to destroy planets.

Yes, the story’s main drive is as basic as most other big summer movies, as we have a few heroes facing off against a major adversary with the destruction of a world in mind.  The movie even gets bogged down pretty quickly in setting up everything that appears to be important, following its opening scenes.  It is understandable, as there is a lot of leg-work to do, in order to bring audiences up to speed, but having a fun adventure scene followed up by Star Wars prequel-style exposition certainly makes you hope the movie does not bog itself down too often in the ‘rules’ of this new world being explored.  Fortunately, it doesn’t.  Guardians of the Galaxy has plenty to offer in terms of fun characters, great visuals, humor and more.

Co-writer/director James Gunn has gone from Troma films and much smaller scale movies to a giant space opera and he has done so very effectively, which comes from his confidence in making some very silly ideas work.  Having a talking raccoon function as not only a comedic aspect of the film, but as a character audiences can empathize with is certainly a tough task, but the way he is utilized and the smart writing provided by Gunn and co-screenwriter Nicole Perlman does a solid job of making something like this easily work for the film.  The screenplay for this film, in general, is one of Marvel Studios’ strongest, as it finds a way to balance a lot of characters, while retaining a sense of humor and aspects that deliver on individual character arcs throughout the film.

To really dig into it, Guardians is just as much about accepting loss, moving on from events of the past, and finding one’s faith in new companions, as it is about being a fun space adventure romp.  Each of our lead characters really start out as losers to an extent, but coming together helps them as characters, which in turn provides the film with directions to take based on what satisfies their individual stories, instead of what works best for the plotting.  This kind work done for the characters is what helps Guardians in having one of the best third acts of any of these Marvel features, as the large scale action is balanced by knowing everyone’s role in the fight and why it is important. 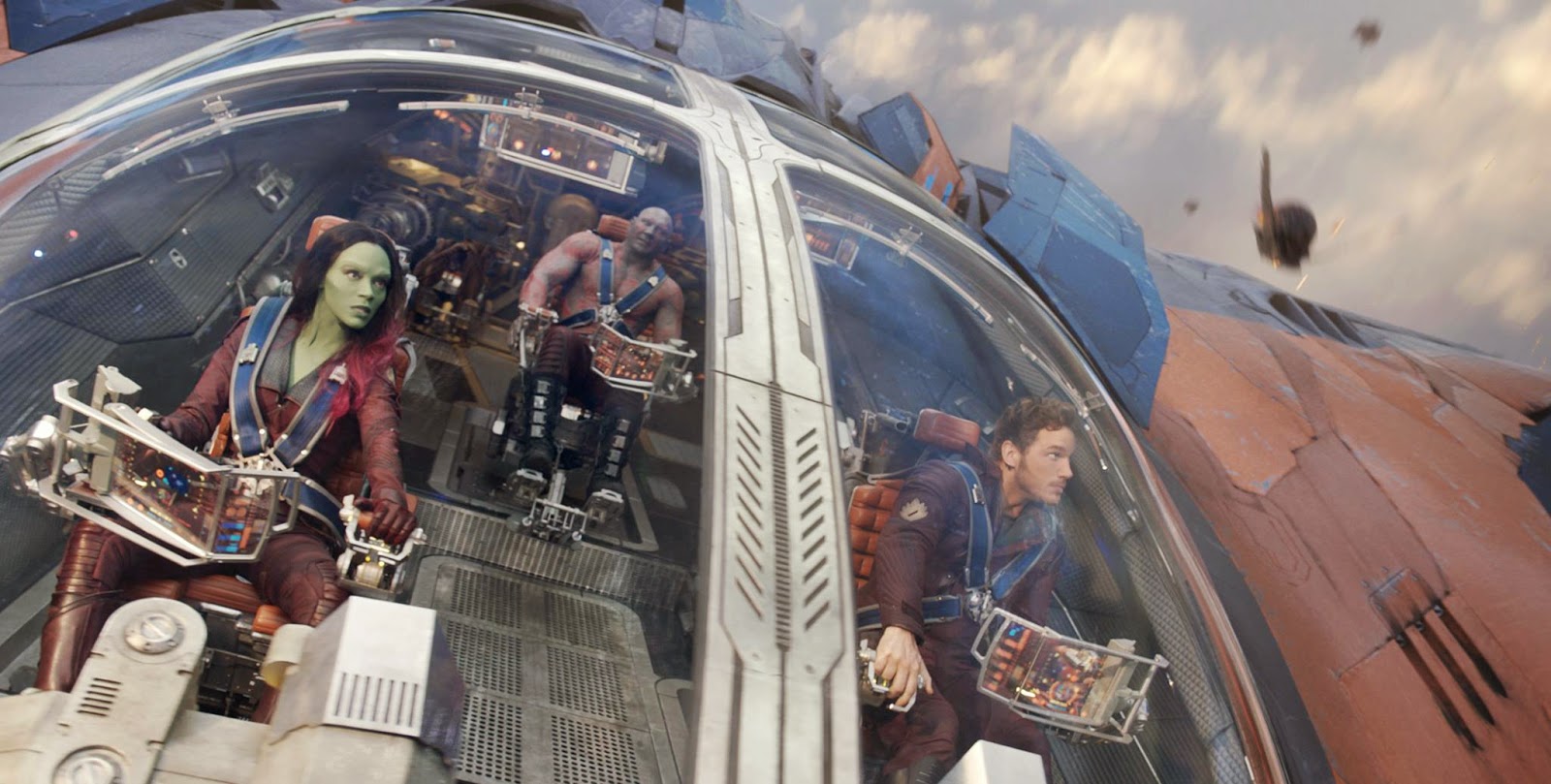 Keeping the characters in mind, Guardians is stocked with actors who all seem quite game.  Pratt’s charisma is perfectly suited for a character like Quill.  Saldana continues to feel right at home as an alien warrior.  Bautista may secretly be the best thing about this movie, as he plays the character of Drax so straight that everything spoken to him is taken literally.  But then you have Groot and Rocket, with Bradley Cooper providing some wonderful voice work.  Additionally, there are all of the other actors, who at the very least keep you up to speed on who is who, based on how diverse the cast is.  This film also stars John C. Reilly, Glenn Close, Karen Gillan, Michael Rooker, Djimon Hounsou, and Benicio Del Toro and there is plenty of joy to be found in a film with this crazy of a cast.

From a technical standpoint, Guardians is a stunner (even in 3D).  It may be a space opera, but the superb use of colorful visuals maintains the comic book-vibe as well.  There is a lot of great imagery in this film that extends beyond how effective just Rocket may be.  The different planets, space ships, and scope of it all makes this quite the summer spectacle, even allowing one to look past Gunn’s rather novice approach to filming and editing some of the action.  Cinematographer Ben Davis certainly does his best to make this look like a rip-roaring space adventure and he largely succeeds when the film begins reaching into more epic territory, such as large scale battles taking place in the skies above certain planets. 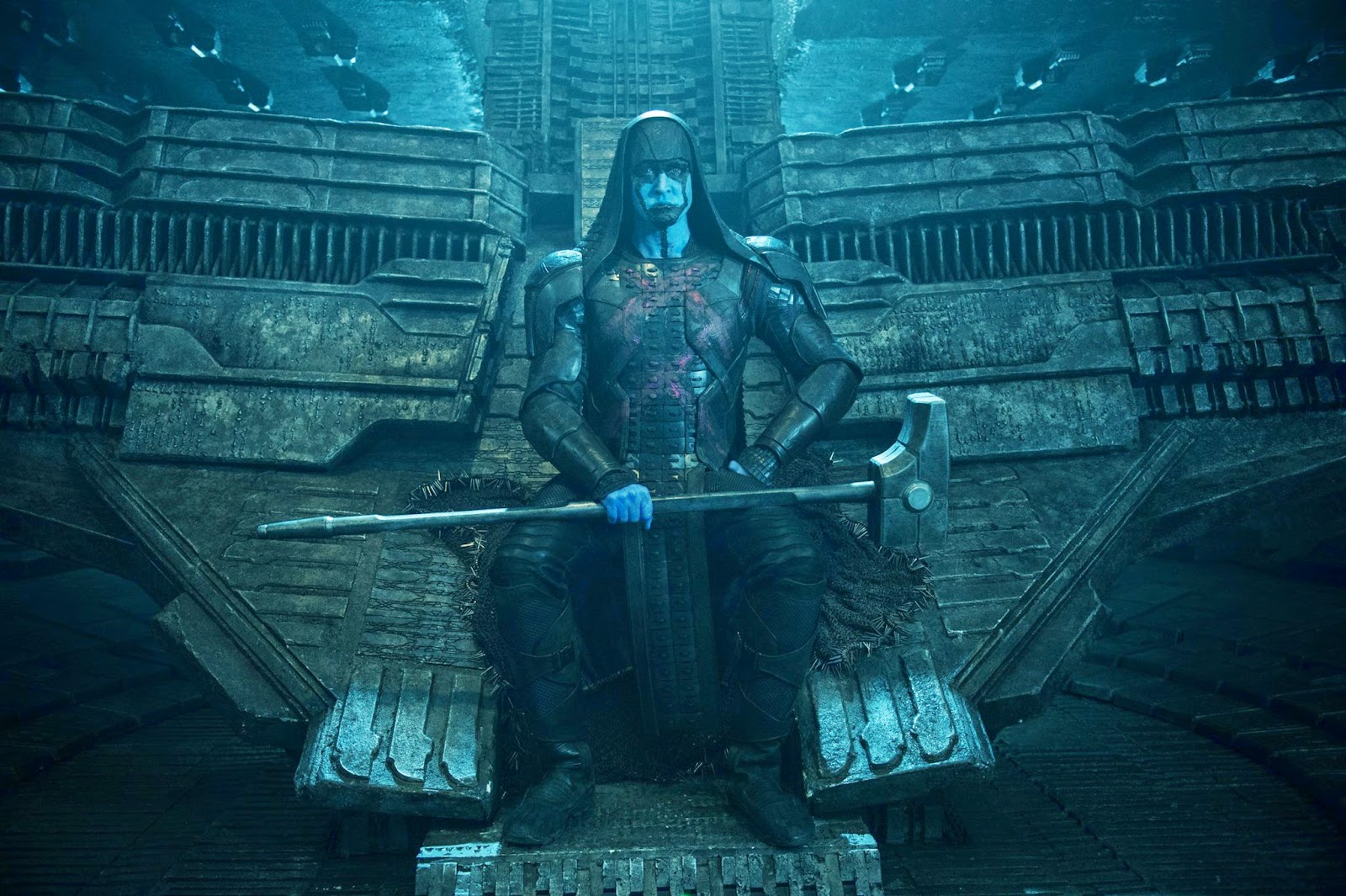 There is a lot to take away from Guardians of the Galaxy.  I have not even mentioned its wonderful 70s/80s-themed soundtrack (originating from Quill’s Walkman, as he was taken from earth in 1988), but that is just another element that makes this movie so much fun.  Marvel has taken a risk, despite fitting their weirdest idea inside the box that has made most of their other films work, and come out with a very strong entry into their cinematic universe.  The film is very funny, very witty, gorgeous to look at, and able to balance its action with solid character work.  It manages to build a universe effectively, without ever feeling like a chore.  I can only hope that the already scheduled follow-up is even more primed to head towards the anarchic-direction that James Gunn likely restrained himself from for his first time out.  Regardless, Guardians of the Galaxy is one space adventure not to miss.

Gamora:  I am surrounded by the biggest idiots in the galaxy. 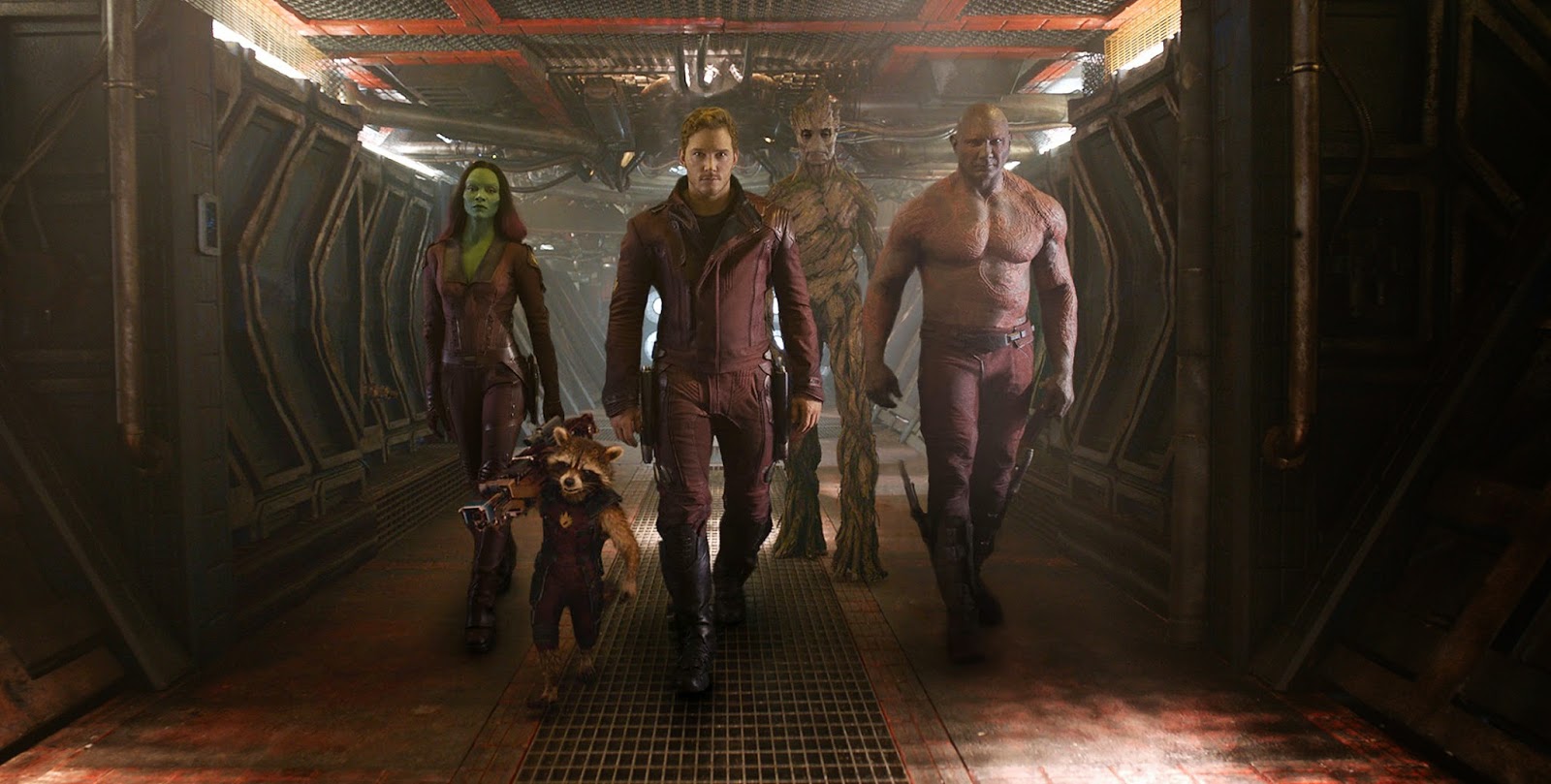