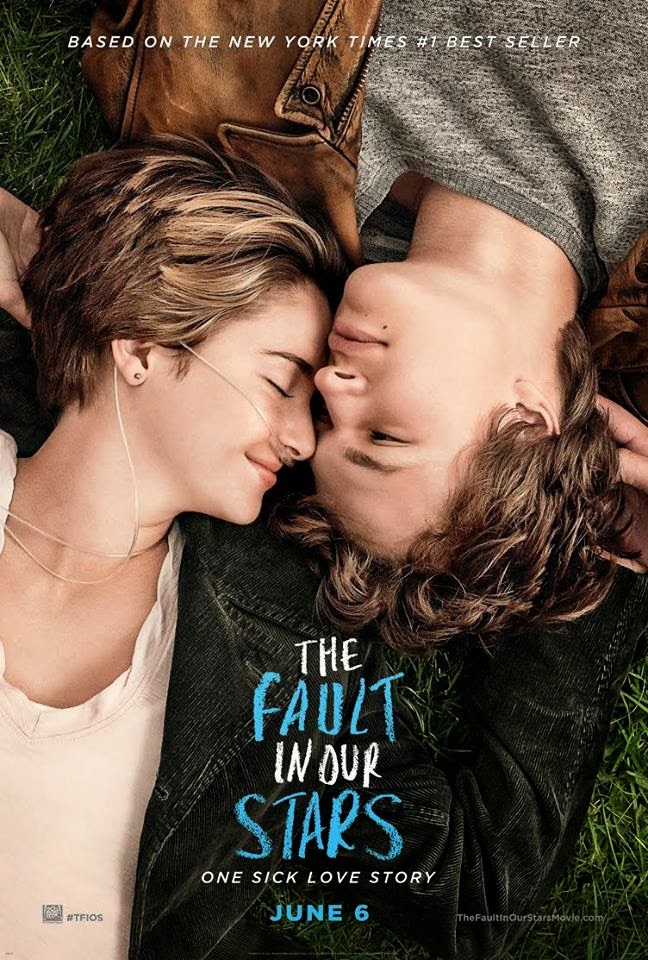 Actors can make all the difference in films that only have so much going for them, based on either the screenplay or the way a film handles convention in general.  The Fault In Our Stars is a film that deals with two young adults with cancer, who happen to fall in love with each other.  There is obviously more to it than that, which is what I assume made the original novel, by John Green, so compelling to its large fan base (note: I have not read this novel), but that is the one sentence way to describe the film.  Keeping that in mind, while not doing much to be all that innovative, the strong cast was enough for me to accept the story being told, as many of the right notes are hit to make it a film that certainly tugs at the heartstrings, but does not try to pride itself on having that effect. 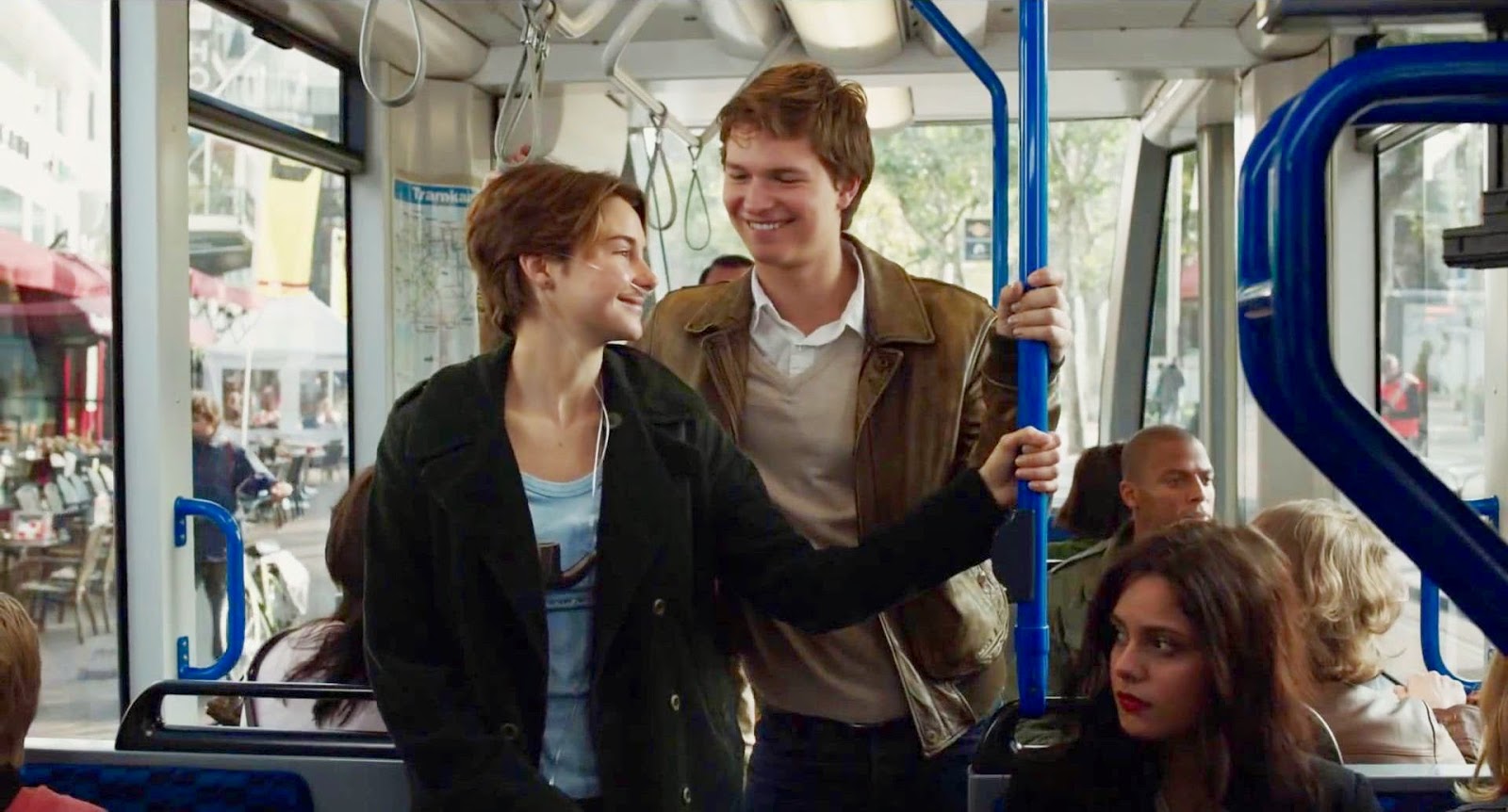 Shailene Woodley stars as Hazel Grace Lancaster.  I could have just said Hazel, but her suitor, Gus Waters (Ansel Elgort) insists on calling her Hazel Grace.  After meeting at a cancer support group, the two quickly become smitten with each other, sharing many aspects about their lives, which range from their health issues to their love of books.  A book plays a major role in where this story goes, as Hazel’s favorite book, An Imperial Affliction, written by Peter Van Houten (Willem Dafoe), has already been an influence on Hazel and becomes an influence and major drive for Gus and where he would be happy to take things, if given the chance.  While pursuing certain whims involving this book and its author add some journey elements to this story, the larger journey is how Hazel and Gus proceed down the route of their love story, without letting certain circumstances have the power over them.

While the characters of Hazel and Gus are merely teenagers, they have a knack for speaking in an informed nature that reflects their characters in a pretty specific way.  Hazel has a sarcastic wit, while Gus is more brash, yet happy to pronounce himself in a seemingly very thought out way.  Initially, some of this stuff, particularly Gus, rubbed me the wrong way, until I realized something:  they’re just kids.  I am removed enough from the position these characters are in and am certainly not old or experienced enough to lay out what it is to truly register certain emotions, but I do know that kids, teenagers especially, have a way of believing themselves to be filled with knowledge and understanding well beyond their ages.  With that in mind, it became a lot easier to watch how these characters behave and interact with each other. 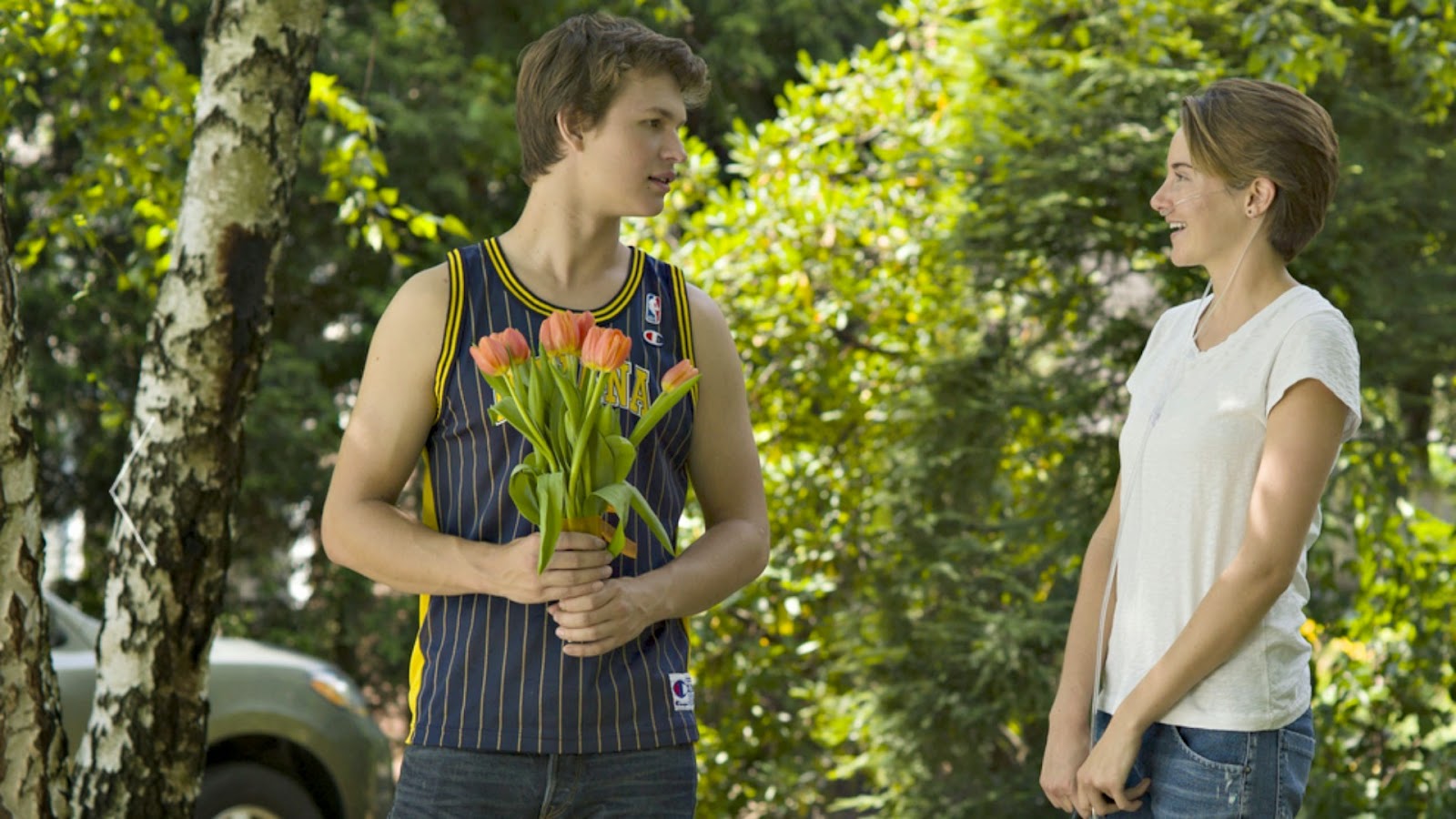 The attempt is made to acknowledge the path that these stories traditionally take and suggest that Hazel and Gus are taking on the world differently than others have or others stories have shown us.  While that does not end up being true, it is because I see these characters as the teenagers that they are that it became easier to accept that The Fault in Our Stars was less about doing something different with a “cancer-themed” story and more about providing us with well-defined characters in a story that is doing what it can to keep them the focus, over the tragedy that could likely affect them by the end.  The film goes down a fairly standard route, when one thinks about it, which of course involves a shift from the lighter playful/comedic side and into the heavier dramatic territory, but even when reaching certain moments, I never felt manipulated by the drama, based on both acknowledging what I was getting into beforehand and appreciating what the actors and filmmakers did with the material.

As stated before, I have not read the novel this film has been adapted from, but I can see how the film will likely work for those more familiar with the prose presented in book form and now having it brought to life by screenwriters Scott Neustadter and Michael H. Weber, who were also responsible for adapting The Spectacular Now, also starring Woodley (I liked that film quite a bit more).  With that said, The Fault In Our Stars provided me with a lot to be invested in thanks to the solid work from Woodley and Ansel Elgort, along with the adult stars.  Laura Dern, in particular, did plenty to elicit the right amount of emotion from a certain perspective, without seeming overbearing within the context of the film.  Still, this film really belongs to Shailene Woodley, who brings a lot of passion to the part of Hazel that ranges from acerbic wit to emotional minefield. 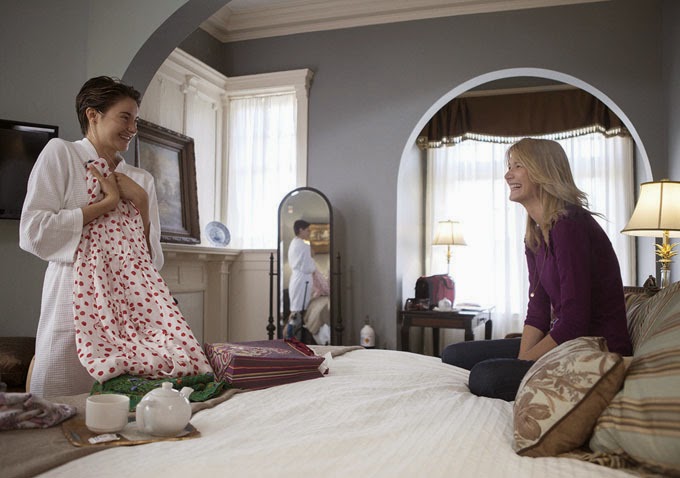 Director Josh Boone provides a fairly straightforward touch to the film, where even the exotic journey that the stars take in the middle of the film does not exactly standout a whole lot, but he at least hits the right moments when it comes to close-ups.  I think he falters in areas that rely on narration to do more of the work, along with how he stages certain dramatic scenes, but it is nothing too drastic.  Having a film that will likely make audiences saddened enough to cry and being manipulative are two different things to me and while The Fault In Our Stars is maybe not as creatively directed as similar films that I enjoy more, I think it does fine with not insulting the audience in its approach to the way in unfolds major dramatic beats.

I feel like mentioning the soundtrack is a good way to end this review, as it is a separate indication of what kind of film audiences are getting into.  The film features a lot of low-key music from current singers and alternative musicians like Ed Sheeran and M83.  This is in no way a bad thing, but it does place the film in a certain time that I would think indicates who this movie is mainly for.  The story has themes that are fairly universal, but while credit to the actors is deserved, I think it is a film that is designed for a particular generation, with the praise that comes from outsiders working due to how effective they may think everything else about the movie may be.  I am not averse to this kind of film or even films of generations separate from my own and with that said, The Fault In Our Stars is fine for what it is and a little better because of how it tries to accomplish its goals. 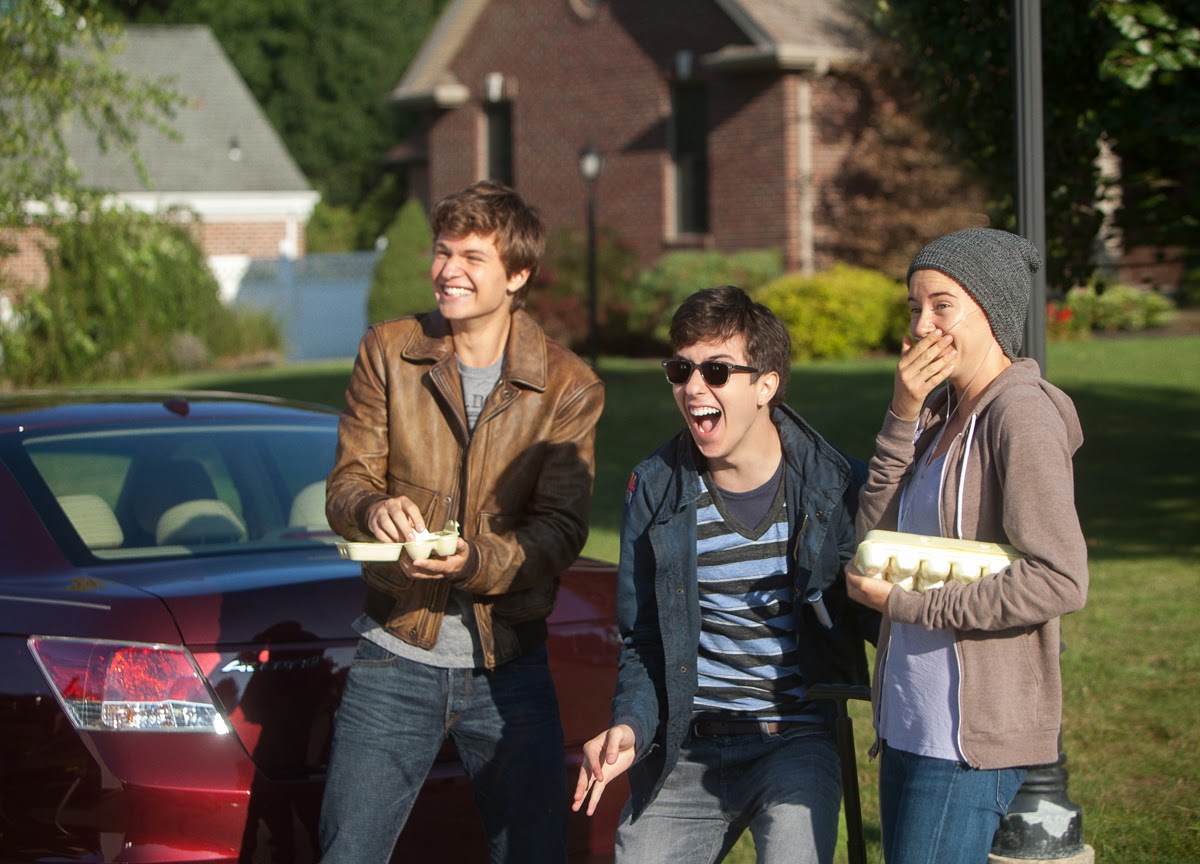 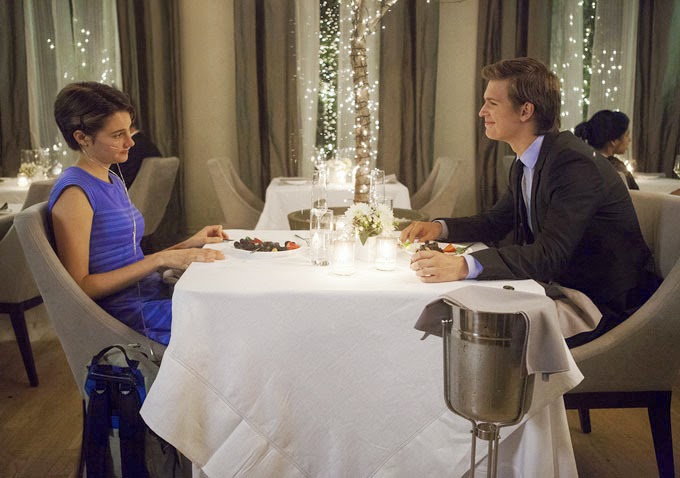 Aaron is a writer/reviewer for WhySoBlu.com.  Follow him on Twitter @AaronsPS4.
He also co-hosts a podcast, Out Now with Aaron and Abe, available via iTunes or at HHWLOD.com.
By Aaron Neuwirth
2014 Films Ansel Elgort Based On a Novel Coming of Age Drama Laura Dern Nat Wolff Romance Sam Tramell Shailene Woodley The Fault In Our Stars Willem Dafoe
Reactions: