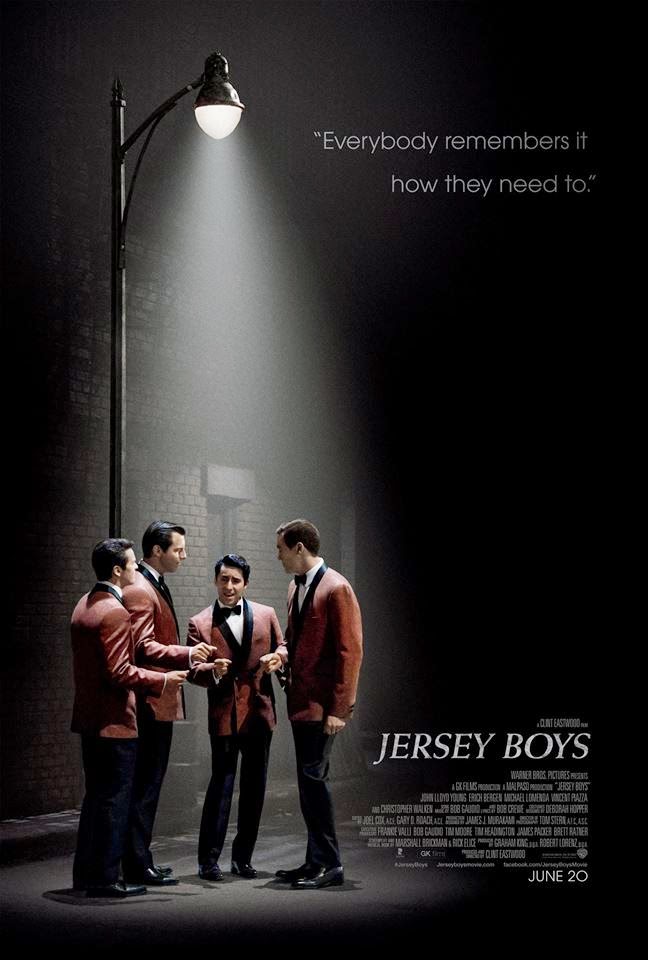 Bob Guadio:  I never heard a voice like Franki Valli’s.  After eight bars, I know I need to write for this voice.

I suppose it comes to no surprise that the soundtrack to Jersey Boys, the Tony Award-winning-jukebox musical-turned movie, is a good one.  Bringing on many involved with the original show led to some solid vocal performances that really let the scenes featuring The Four Seasons and others show off their singing abilities.  I only wish the rest of the film had the kind of spark that made me enjoy scenes of songs that I have heard plenty of times before being performed.  It was nice to see director Clint Eastwood head in a different direction for the kind of film he wanted to make, but unfortunately his old school talents did not really assist bringing this old school group onto the big screen. 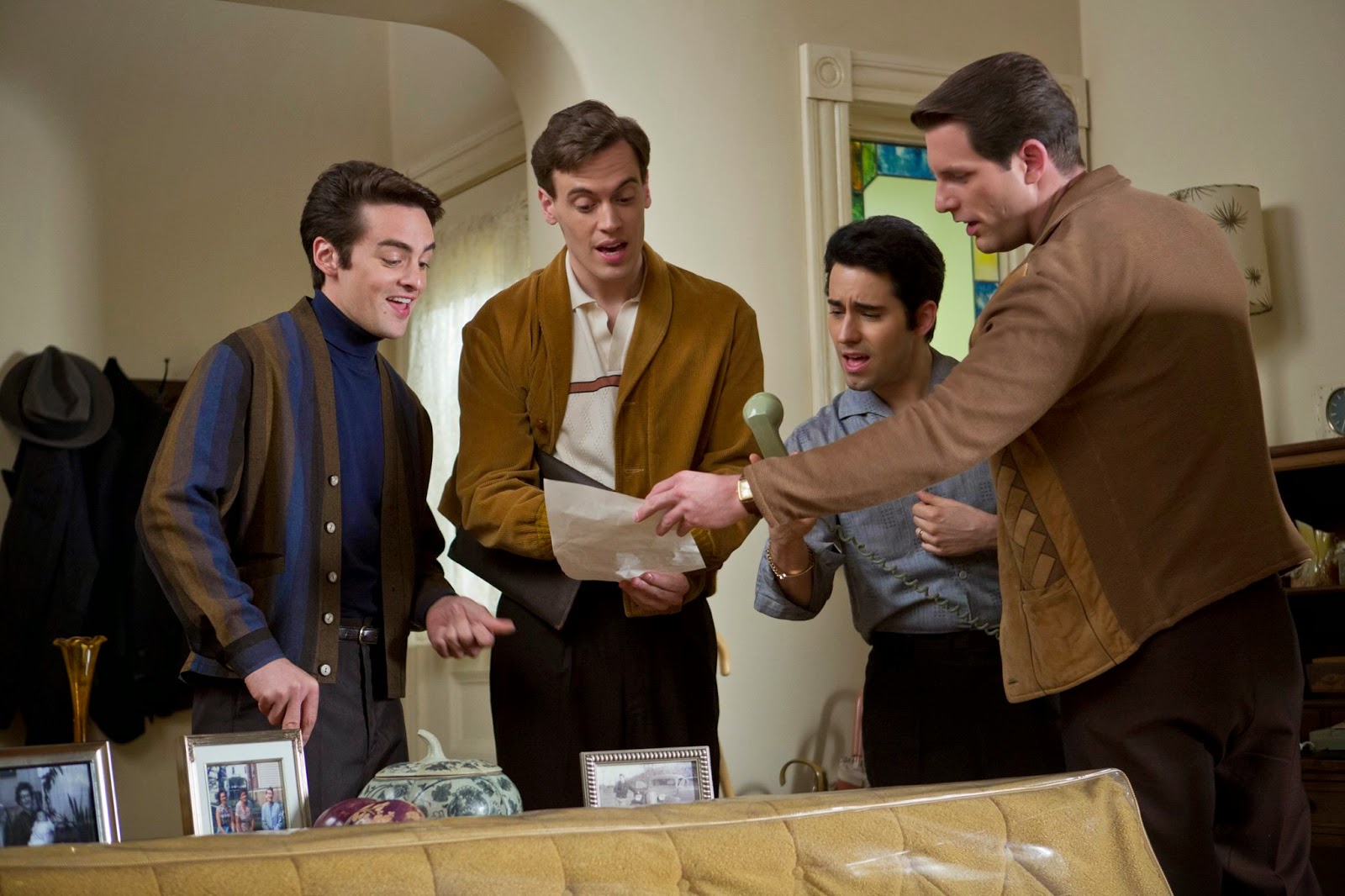 The film is a biographical drama and a musical, but given the origins of this screenplay, it serves as an adaptation of a play that takes some easy liberties with the true story in an effort to make a more entertaining one.  With all that said, this is a film about The Four Seasons, an American pop band featuring a strong lead vocalist in the form of Frankie Valli (John Lloyd Young).  The story follows a pretty traditional path, where we see the formation of the group, which includes the other members: Tommy DeVito (Vincent Piazza), Nick Massi (Michael Lomenda), and Bob Gaudio (Erich Bergen).  We watch them rise, succumb to certain pressures, find issues with each other, eventually fall apart, deal with personal issues, eventually make amends, and perform one last big number.  It is the kind of story that is common for music groups, but that does not make it less effective from a story-structure standpoint.  Really, it just gives way to seeing how certain big songs came to be and how they factored in during pivotal moments.

The drama in this story is not much of an issue.  Sure, there is a familiar feeling to this story, as you can only do so much with music groups and what happens to them over time.  Still, just as with sports movies, it is easy to overcome formula if the performers are really delivering or something about the characters really pushes one around certain expectations of what is to come.  Jersey Boys attempts that in the form of its narration devices and the wild card that is Christopher Walken, as mobster/life-long Frankie Valli fan, Gyp DeCarlo.  Unfortunately, having fun with shifting narrators (who talk directly to camera) and unique Walken deliveries can only take you so far if the film does not have enough energy to support it.

Clint Eastwood seemed like an odd choice, as far as directing an adaptation of Jersey Boys goes and that proved to be a correct line of thinking, as the film has an odd sense of what it is trying to do.  Early scenes have plenty of life, working in locations that feel stagey, but in a fun way, allowing for a lot of pep to go with the pop.  As the film moves into darker territory, things slow down considerably, which can be expected, but at the same time, one can see how a Scorsese could really keep up the energy level, even as everything is not all well and good for Frankie and the boys.  Of course, there are also the random touches that go from neat special effects to recreate New Jersey, New York, and other locations, mixed with the occasional goofy use of rear projection, which is deliberate, but no less jarring.

I like Eastwood as a director and he knows how to bring a workman-like feel to his movies, which are generally well made, even when he relies on his simple piano scores and the saturated look provided by his longtime cinematographer Tom Stern.  With Jersey Boys, it seems like he wanted to break away from what he likes to do a little bit, only to find himself at odds with what he is used to doing, which is to add a bit of grit and reality to his features.  That could be well and good if the film turned out to be this exciting mix of musical glamor and the shaded reality behind it all, but we miss the ‘exciting’ part due to the conscious decision to make the film more sedate than a jukebox musical should be.

As far as the boys go, John Lloyd Young headlined the original production and he is fine here in this film version.  He clearly has the singing chops and even while he may not bring all the screen presence needed, I enjoyed how he went from innocent to adult in this feature.  Vincent Piazza is a little livelier, given his in-over-his-head work as Tommy DeVito.  I also liked what Michael Lomenda brought to the Nick Massi role, as he is the least complicated of the quartet, but an interesting presence.  Erich Bergen has the most satisfying performance as Bob Gaudio, which may or may not be due to the fact that he’s the only character not from the same streets as the rest of the boys.  The rest of the cast barely registers, as neither major female presence in Valli’s life has a whole lot to do here and Christopher Walken adds a level of gravitas and mild humor, sure, but only jumps in occasionally, getting my hopes up that his incredible dancing skills will make more of an appearance, as opposed to more mobster talk.

At 135 minutes, Jersey Boys feels like a big production, for sure.  While it is certainly nice to hear songs like “Sherry” and “Big Girls Don’t Cry” being brought to life in a big screen movie, one could either get more joy out of the energetic musical in stage form or simply listen to the songs at home or on the radio.  Jersey Boys has plenty of power in its musical moments, but as a whole, the film lacks dynamism and any real ingenuity to make it stand out more than it does.

Franki Valli:  That's why I'm still out there singin', like that bunny on TV with the battery, I just keep goin' and goin' and goin'... chasin' the music, tryin' to get home. 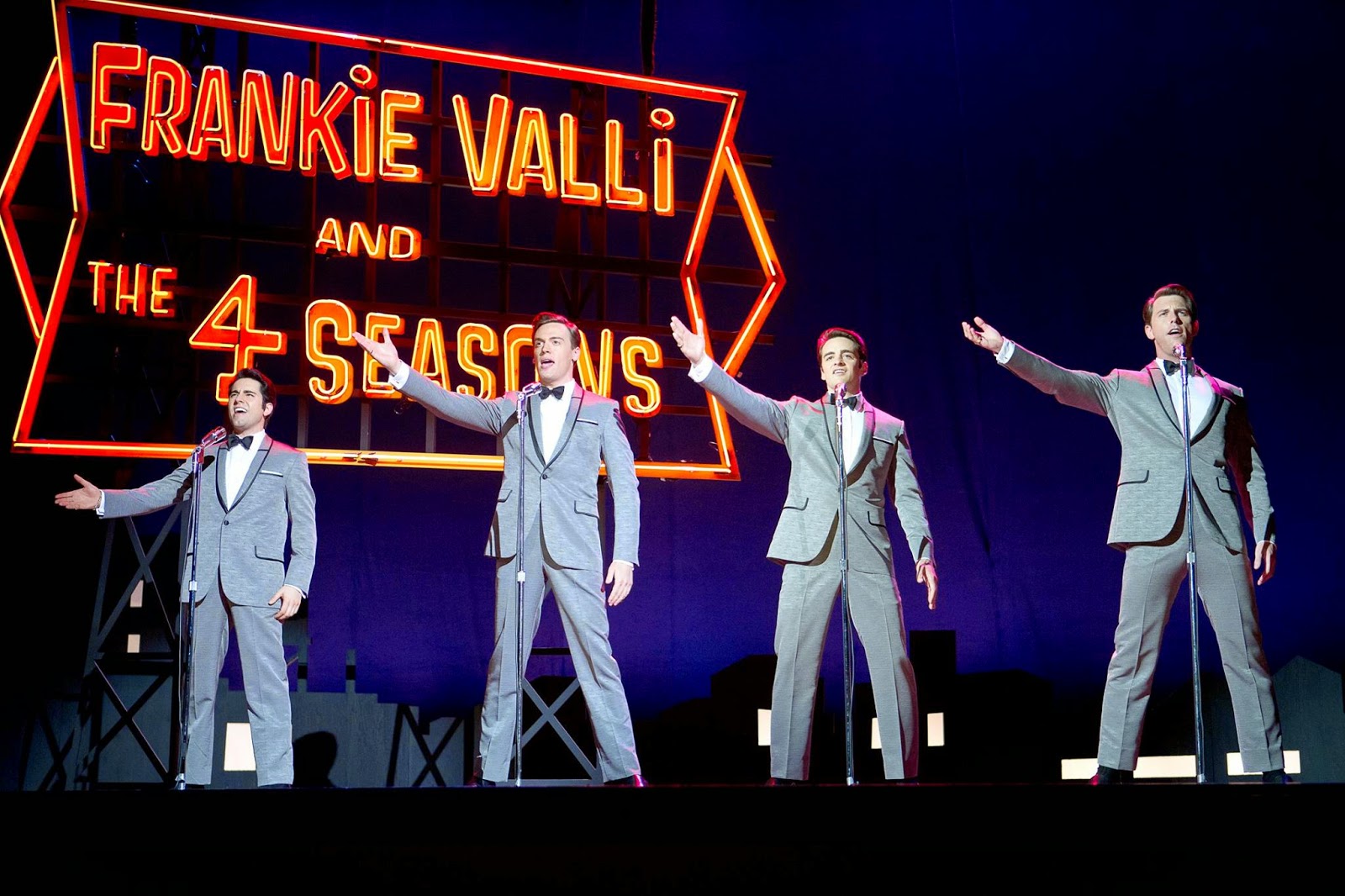